110 vs 220 Volt Hot Tub: Which One Should You Get? - Backyard Boss Skip to content
We are reader supported. External links may earn us a commission. 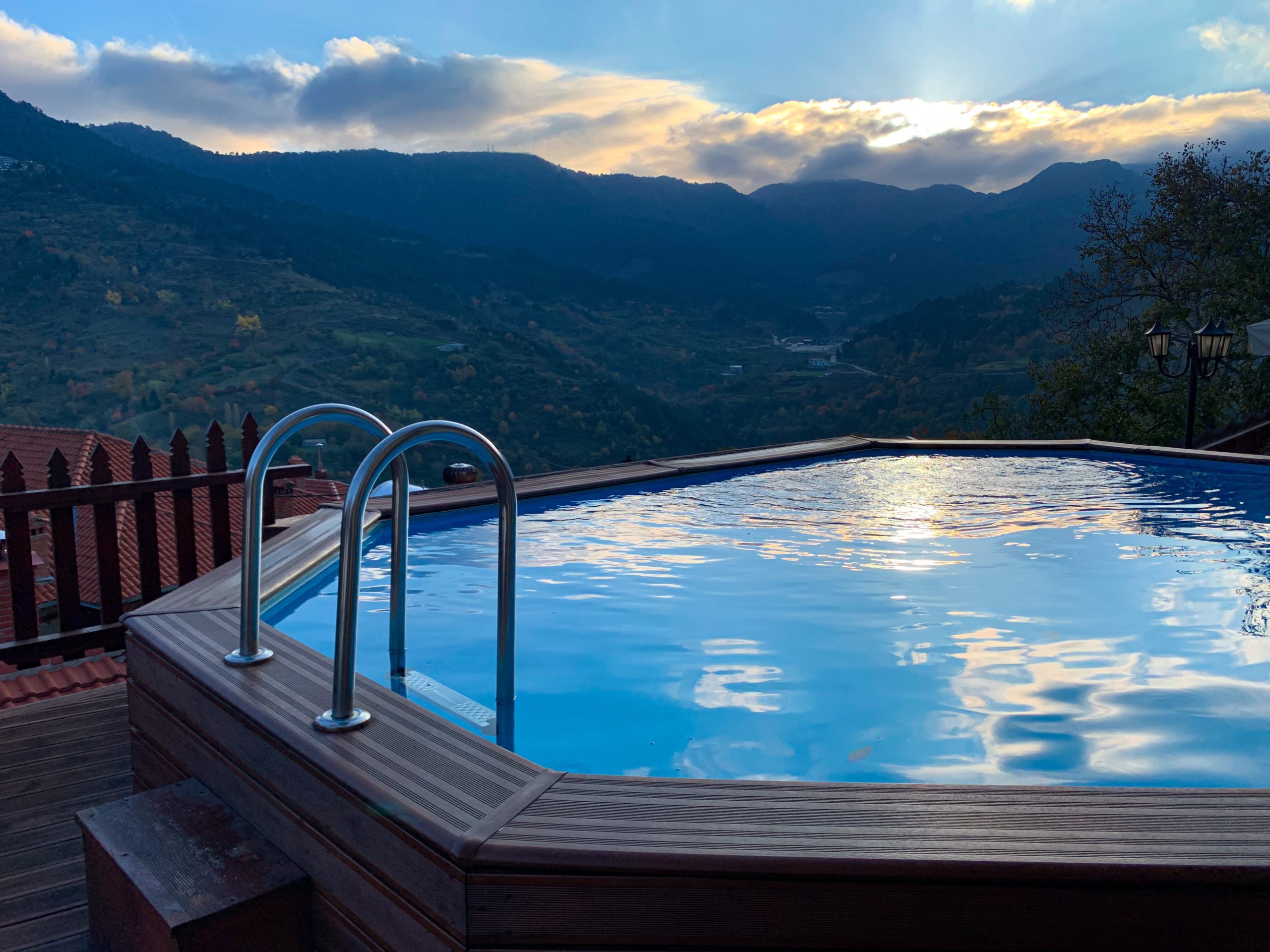 If there’s one thing all of us at Backyard Boss have in common, it’s a love of hot tubs. We enjoy working hard in our backyards, but we also truly value slipping straight into the hot tub after a long day of work. This relaxation is great for our bodies and minds and helps us to be more efficient with our daily responsibilities. Because of our passion, we’ve already created numerous articles about hot tubs, such as the best hot tubs, the best inflatable hot tub, and the best plug and play hot tubs.

To find the perfect home spa, you’ll have to go through several features, such as size, style, brand, model, color, and many more. However, there’s one extremely important factor that you have to take into consideration at the very beginning. That factor is the voltage of the hot tub. There are two voltages, 110 and 220 that you’ll have to choose from, and today we’ll explain to you the differences between these two.

The Differences Between 110v and 220v Hot Tubs

110v hot tubs get their name from the fact you just have to plug them into a standard 15 amp electrical outlet, and you can enjoy being immersed in their bubbles. 220v hot tubs unfortunately aren’t that easy to install. They’re hard-wired from the home circuit breaker box to a safety cut-off box that’s near the hot tub, and then directly into the spa control box.

Both of these hot tubs have unique features and are used for different purposes. If you ask which of them is better, the answer is very simple – it depends. It depends on your needs, budget, and a few other important factors. That’s why we’re going to show you the pros and cons of both 110v and 220v hot tubs, and share our personal recommendation, so you’ll know which one is best for you.

Both hot tubs possess a unique set of features.  Let’s first take a look at 110v, and try to determine who would benefit most from having it.

Since these tubs require less energy to function, they’re smaller than 220v tubs. This means they’re cheaper and more portable.  So if you want to have your own spa, but at the same time you don’t want to extend your budget, they’ll be a great solution. They weigh less, so you can easily move them from one place to another when needed. Anyone who is renting a property will benefit from having it.

They’re also known as “plug and play” tubs. This means they’re very easy to install. You just have to find the right place in your house that can support its weight, fill it with water and turn it on. They don’t require any hardwiring or electrical work. However, you might have to unplug other electrical loads on the circuit or plug it into a 20 amp outlet.

Although they have a lot of advantages, there are a few important downsides we have to keep in mind.

Since they have fewer voltages, this might bring several inconveniences. First of all, it takes more time for them to heat up, so you’ll have to remember to turn it on some time before your bath. They can also have issues with power features like jets or lights, and holding the appropriate pressure on your jets. They aren’t best suited in colder climates, since they struggle with maintaining the chosen water temperature.

This hot tub cleverly uses a combination of HydroJets and AirJets for a soothing spa experience.

This hot tub uses a clever mixture of HydroJets and AirJets for the ultimate spa experience. The HydroJets pump out both air and warm water for more powerful jets to target and soothe specific muscle aches while keeping the water temperatures high. This durable and fortified tub uses eight HydroJets and 114 AirJets, making it great for colder climates. The accessories it comes with include a cover, a spa pump, a ChemConnect dispenser, and two filter cartridges.

We’ve discussed the pros and cons of 110v tubs, so now it’s time to establish for whom 220v tubs would be the perfect fit for.

They have twice the voltages, so it means that they’re larger. Therefore, they can accommodate more people – up to five or six at the same time. With a larger heater, it takes less time to heat the water, so you’ll be able to enjoy it quicker. With more voltages, they work more efficiently. They can more easily power pumps, heaters, lights, Bluetooth, stereo, and other things at the same time.

These tubs might be more expensive, but they can actually help you save a lot of money. They’re more energy-efficient, as the heater won’t have to work as hard to heat the water. They’ll maintain your jets’ pressure and temperature on the desired level, so your baths can be longer and more enjoyable, and they’ll also help you to lower your energy bill. Thanks to all that, they can be used in colder climates, so you can even enjoy them outside during long winter nights.

Although more power equals more fun, unfortunately, these tubs also have some disadvantages that you need to be aware of.

The bigger your bath gets, the more you have to pay for it. Thus, if your budget is limited, they won’t be the best choice. They aren’t also simple to install. If you don’t want to do it by yourself, you’ll have to hire an electrician to help you connect it since they require additional hardwiring. They’re difficult to move between locations, so keep that in mind if you’re renting a property. If you plan on moving out, it’ll be problematic to take the bath with you. 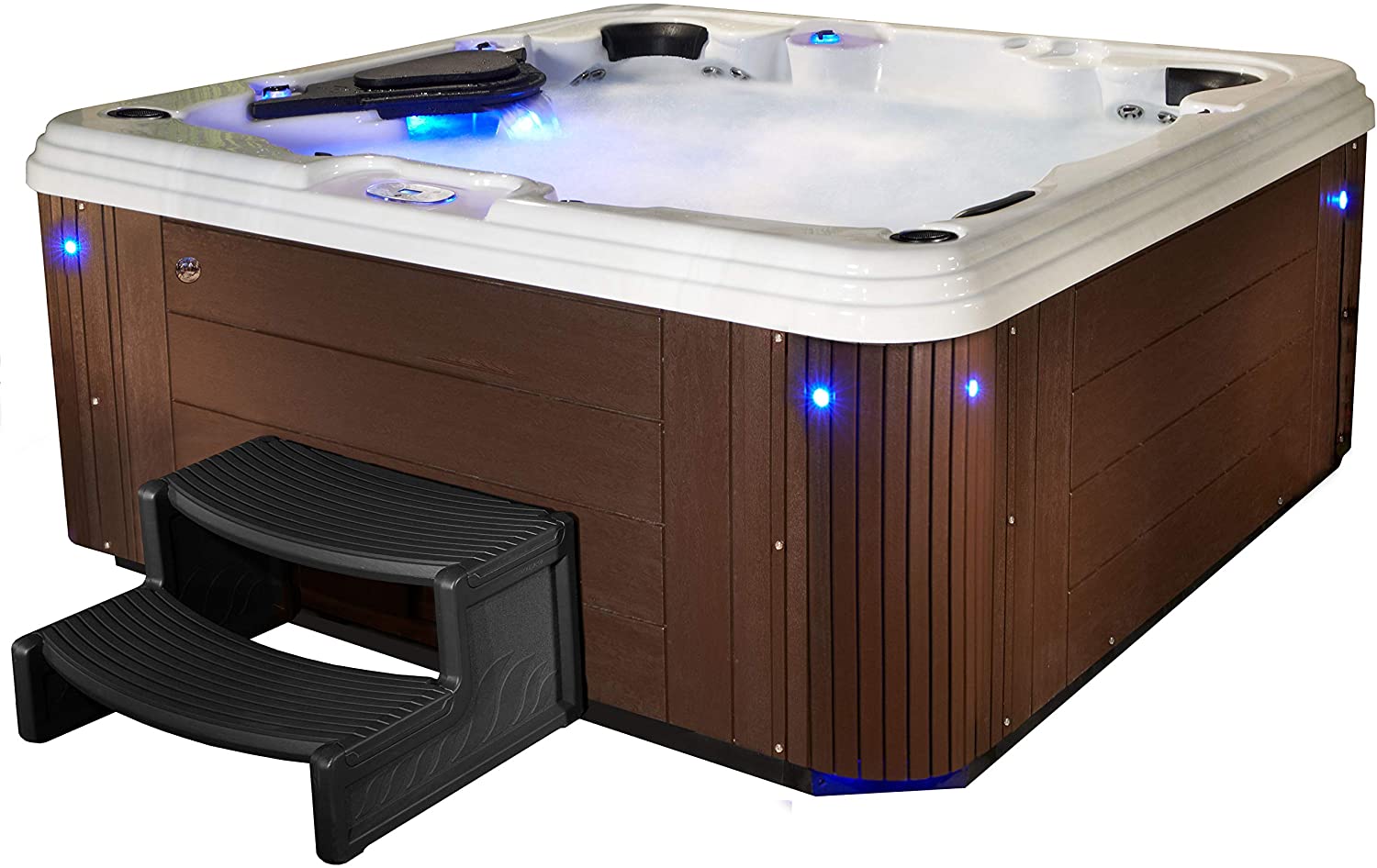 Relaxation has never been easier with added features such as an LED waterfall, LED perimeter lights, wraparound headrests, Bluetooth pairing speakers, massage jets, and portable steps for easy access in and out of the hot tub.

The Essential Hot Tub Syracuse is not only extremely comfortable, but also has a great style. It has eye-catching features such as an LED waterfall, LED controls, and cabinet lighting to set the mood of your bath. It’s super easy to use, thanks to the buttons on the digital backlit display control unit. It’s energy-efficient due to a 4KW Balboa stainless steel heater, and it’ll also help you reduce your energy bills. The captain’s chairs are equipped with padded headrests and rollover neck, so they allow you to feel as relaxed as never before.

You’ve gone through the differences between 110v and 220v hot tubs, you’ve understood what the pros and cons of each of the tubs are, and you’ve checked the recommended products from both categories. However, we know that before you decide which of them you’re going to get, you’d like to know what our choice is.

We highlighted before that the most important thing before you buy the hot tub is to determine what your needs and requirements are. Since I live in my own house and I don’t plan on moving out anytime soon, and I don’t mind paying for an electrician to help me install it, my choice is a 220v Hot Tub. If your needs are similar, we’d advise you to do the same. If you want to buy good quality and very economical 220v Hot Tub, take a closer look at The Essential Hot Tub Syracuse, since it might be the perfect choice for you.

What Not To Plant Near Cucumbers

10 Plants You Should Always Grow Side-by-Side

The Best Self-Propelled Lawn Mowers in 2021

How To Change The Color of Your Hydrangeas

Scroll back to top
17shares