11 Algae Eating Fish for Your Garden Pond - Backyard Boss Skip to content
We are reader supported. External links may earn us a commission. 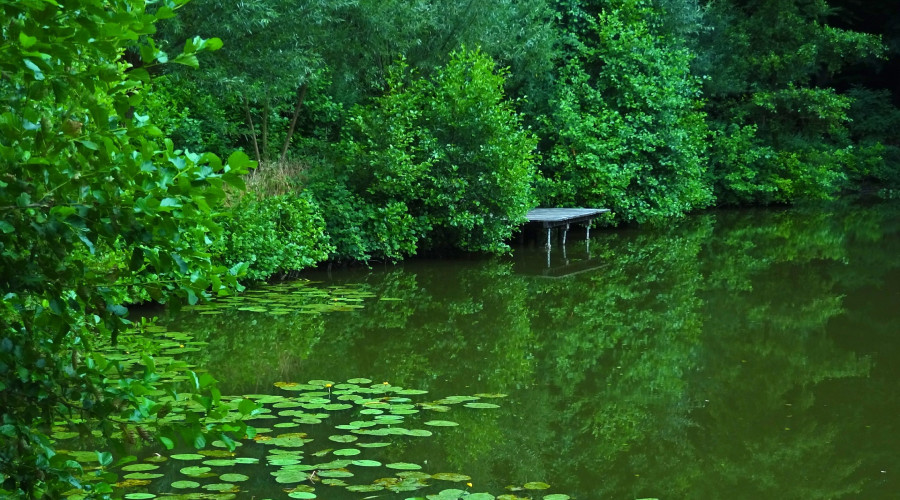 Last year, while walking around my little neighborhood, I noticed a plague on all the ponds: algae. For months, I watched the groundkeepers in the parks and housing complex ignore the algae, letting it build and grow and become so bad that I no longer wanted to look at the ponds. But then one of the groundskeepers got a brilliant idea: add algae-eating fish in. Within a few weeks, the algae problem had vastly improved. 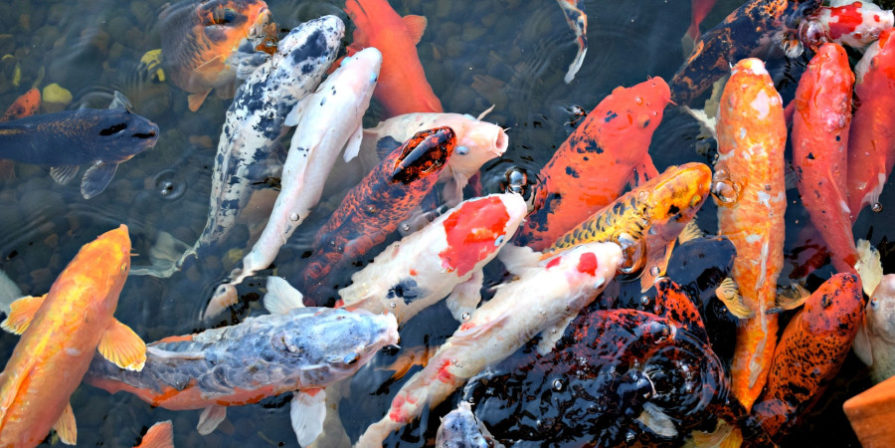 The famously popular Japanese koi fish is the ideal algae-eating machine for larger ponds (1,000+ gallons). The fish grow up to 15-inches typically and need plenty of room to move around. You can keep these guys together in larger numbers. Most of the time, they work well with other fish, though they can grow a bit aggressive during mating season.

Koi live, on average, 25 to 35 years. Best of all, these fish love developing hand-feeding relationships with their humans, so they’re great for your pond and make great pets. They may need some encouragement to eat all that algae in the pond, so as you develop hand feeding with them, grab some algae from the top and hand-feed it to them to help them develop a better taste for it.

Koi thrive in pH levels between 7.0 and 8.6, with water temperatures between 65 and 75 degrees Fahrenheit.

The black suckerfish, or pleco (which comes in many colors), is a great choice for keeping that pond algae-free. They gobble up various species of algae, are hardy, and can handle some cooler weather (i.e., they do great in ponds), and they’re easy to care for.

These little suckerfish grow up to five inches, enjoy a peaceful life with other peaceful fish species, and only need a body of water that’s 20+ gallons in size. This means they’re great for small ponds as well as outdoor fountains in many cases. Their particular favorite algae to nosh on is green spot algae.

They do best with water temps between 60 and 80 degrees Fahrenheit and pH levels between 6.5 and 7.5.

While the mosquitofish is mostly known for its mosquito larvae eating capacity – thus the name – the little, peaceful fish is omnivorous and also enjoys dining on another pond pest: algae. They eat a number of types of algae and enjoy swimming freely with other fish around. If they are in a pond with fish larger than themselves, they will need plenty of hiding spots and vegetation, however, to keep them from becoming the snack!

This fish is so well known for its algae dinners that it’s going “algae eater” in its name! The fish is native to ponds in Asia and is best suited to larger ponds as it grows up to 11 inches. Its sucker-like mouth attaches to rocks, plants, and sides of ponds for easy “cleaning” in the pond. They’re particularly great for vacuuming up black algae.

Note: These fish can get aggressive, so verify compatibility with other fish before stocking them together.

Siamese algae eaters like their water between 77 and 82 degrees Fahrenheit, ideally, with pH levels between 6.5 and 8.0. 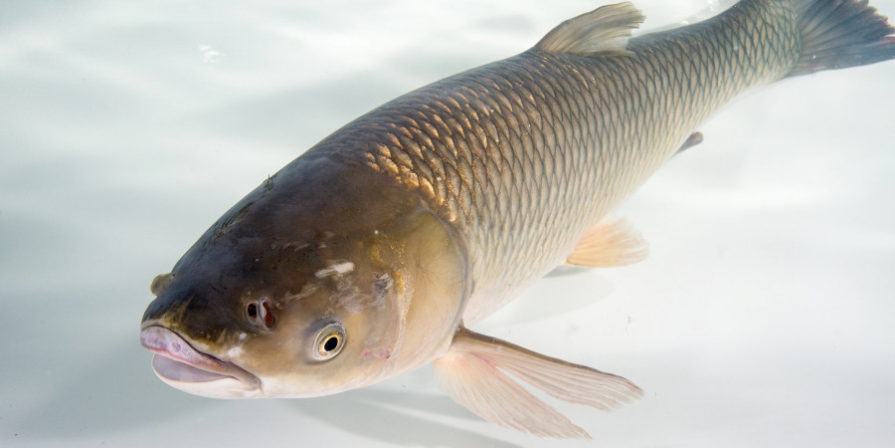 The grass carp is the real deal when it comes to algae eating. Of course, they’re also huge (up to 55 pounds), so they’re only going to work in large ponds of several hundred gallons or more.

Grass carp eat anywhere from 40% to 300% of their body weight every single day in plant material. They do prefer rooted vegetation like pond grasses, but they gobble up that algae, too. They’re ideal for keeping rooted plants under control in large ponds.

Grass carp do best with water temps between 68 and 86 degrees Fahrenehti and pH levels between 7.0 and 8.5.

Another fish only for large ponds (1,000+ gallons) is the channel catfish. These look similar to what most of us think of as catfish, thanks to the whisker-like tendrils. They’re a scavenger/bottom feeder species that eats practically anything in its pathway.

They have a strong sense of smell, which helps them find loads of algae. They’ll gobble down pretty much all kinds in large quantities. They should not be stocked with other fish their size.

Channel cats do best in water temperatures of around 70 degrees Fahrenheit, with pH levels between 7.5 and 8.5. 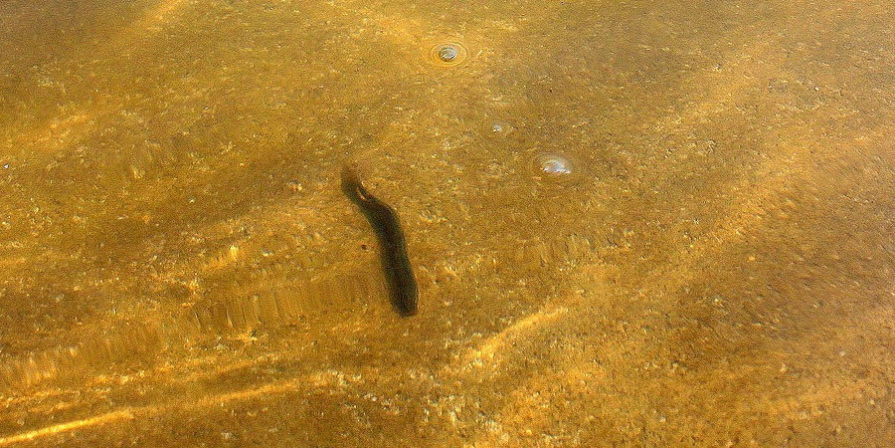 The pond loach is a hungry algae eater. These guys work great with other species as well, like koi and mosquitofish, and they absolutely gobble down that green slimy stuff with fervor. Pond loaches do tend to be a bit shy, though, so you’re not going to see them hanging out where you can see them often. They need a pond of at least 55 gallons and can do all right in poor quality water.

These fish prefer pH levels between 6.0 and 8.0, with temperatures between 59 and 77 degrees Fahrenheit. 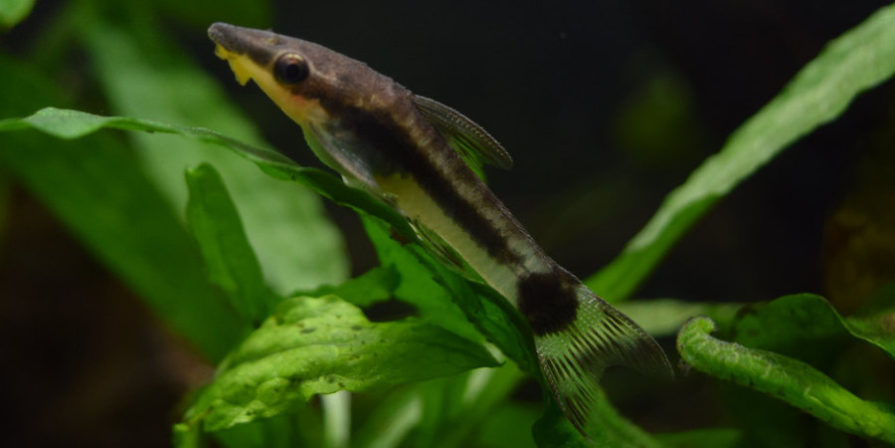 The otocinclus catfish is another algae lover. They’re peaceful and small – only reaching about two inches in length – and tend to get along well with other bottom feeders that are herbivores or nonaggressive. They should be kept in schools together to keep them healthy, happy, and low stress. They should be in ponds at least 30 gallons or larger.

These little guys like their water between 72 and 82 degrees Fahrenheit, with pH levels between 6 and 7.5. 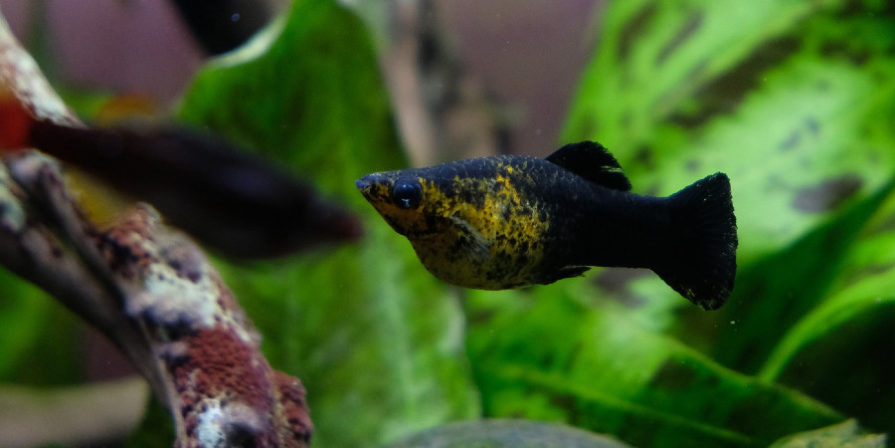 Another brown algae eater is the molly fish. These popular aquarium pets are hardy and work outdoors in ponds as well. They work well with other algae-eating species and peaceful fish, though they can be a little aggressive if they’re in ponds too small.

This unique fish is known by its long, thin body and pointy nose. They typically grow to four inches in length and are compatible with other peaceful fish species. They should be kept in pairs. They do well in ponds at least 12 gallons in size, so they’re great for fountains and small ponds. They do need fairly stable water chemistry, so though they love gobbling down algae, they need to be well-cared for to thrive. Plus, lots of places to hide and some supplemental foods will help them stay strong and happy.

Twig catfish need water temperatures between 73 and 79 degrees Fahrenheit and pH levels between 6.0 and 7.0 for their healthiest life.

Another fish so well-known for its penchant for algae is the Chinese Algae Eater. This is a super easy to care for fish that does well in 30+ gallons. They love to eat and that enables them to grow up to 10 inches. They can grow to become a bit aggressive as they grow in size, so they should be kept with other species that can handle their own.

These fish need water temperatures between 74 and 80 degrees Fahrenheit and pH levels between 6.0 and 8.0 for best results.

Any time you stock fish, whether in a pond or aquarium, it’s important to make sure you’re stocking the right species for your setup as well as species that will be compatible with each other. After all, you don’t want your pH levels to do in the little otocinclus or the channel cats to eat your mollies.

You also need to make sure that you’re stocking fish in the right size pond. Your small algae eaters won’t do as well in large ponds as say a grass carp or a koi. Large algae eaters also won’t do so well in small ponds, either, even if they’re starting out small when you bring them home.

When you’re ready to stock your new algae eaters, it’s also important to introduce them carefully and slowly so that they may acclimate properly and not become ill or contaminate the pond. An ill fish, for example, could infect the whole population, or drastic water changes could make a new fish ill or even end its life.

Quarantine new fish for two to four weeks before introducing them into the pond.

Once the quarantine is over, they’ll be ready to acclimate.

Are Algae Eaters Enough to Keep Your Pond Clean?

Depending on the algae-eating species, the size of your pond, your use of filters, and the types of plants and other critters you have in the pond, algae eaters may be enough to significantly knock down the algae growth in your pond.

However, most of us will never get that exact ratio perfectly down, so it’s important to consider other options for keeping things clean in there. You’ll also want to practice other methods for cleaning the pond. Algae eaters can definitely make a difference, but even the best of the best at their trade won’t be enough to totally “cure” a pond of algae issues.

How To Attract Fireflies Into Your Yard

How To Transplant Seedlings to Your Garden

How to Grow and Care for Peonies