All About Potatoes:Fun Facts for All Ages to Enjoy and Learn Skip to content

Potatoes often become part of a ‘that vegetable’ controversy every few decades due to fads in diets and a general misunderstanding of what a potato provides. Although a starchy root veggie that is carbohydrate-based, it is packed full of nutrients and serves as a dependable, and important food crop.

The following article explores all about potatoes, their various pros and cons, different varieties and fun facts you may never have known about. Plus, since they are an easy to grow vegetables, some tips for adding potatoes to your garden (container or otherwise) are included below as well!

What is a Potato?

Potatoes are an annual plant native to South American regions. Part of the nightshade family, it is related to popular garden plants such as tomatoes, eggplants, and peppers. However, they also are close cousins with deadly belladonna and poisonous jimsonweed. Because of this the leaves and flowers are not edible parts of the plants, but rather it is the starchy tuber connected to the root system that is so desirable.

Potatoes come in a wide array of colors and sizes due to hundreds of years of cultivation. And if you were wondering where potatoes grow, they can be found just about on every continent!

The History of Potatoes 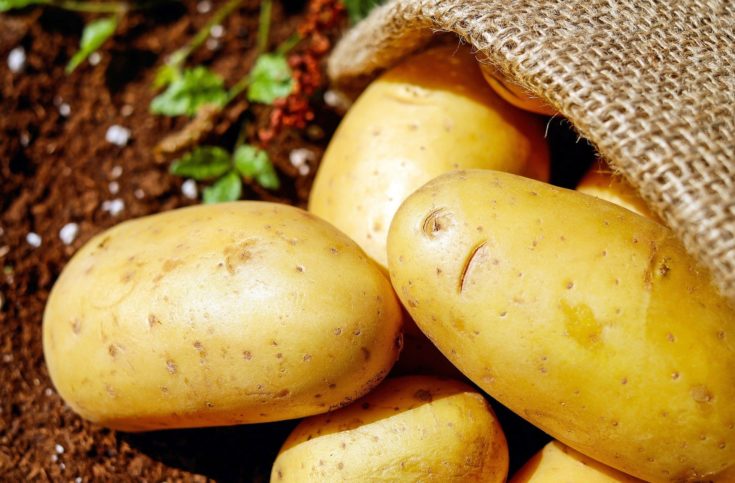 It is believed that potatoes have been cultivated in South America for up to 10,000 years, and hale from southern Peru and northwestern Bolivia. They are believed to have been a principal energy source for those living in the area and were prepared in various ways – similar to how we eat them today.

By 1589 it had made its way to Ireland thanks to Sir Walter Rarligh who planted 40,000 acres of the plant. By 1630 it was spread throughout the rest of Europe. Because of their growth habit, they became a staple crop as they were easier to grow than many grains, and required very little room overall to yield a large harvest capable of feeding many people.

This change in agricultural crops and harvesting influenced the ability to feed a rapidly growing population allowing many countries to assert themselves over others. It also gave rise to modern agriculture, namely the agro-industrial complex that influenced the knowledge of fertilizers and pesticides.

Today the potato is grown worldwide and has become an addition to an incredible array of cultural dishes. Currently, they are the number 1 crop in America and 4th throughout the world.

The Health Benefits of Potatoes 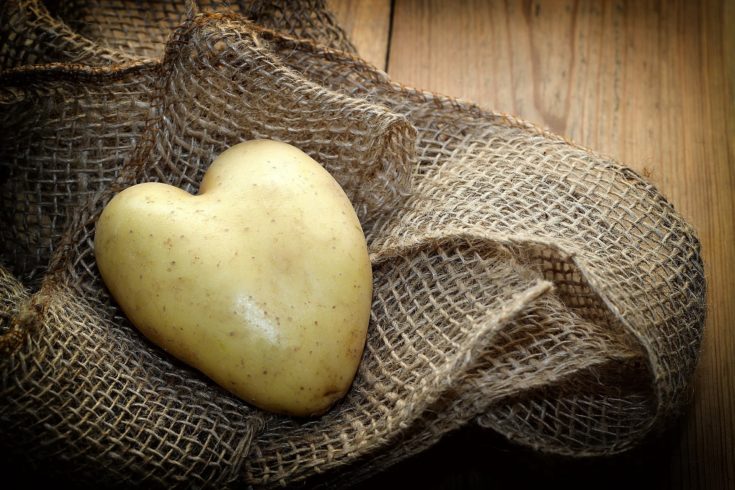 Wondering what is in a potato? Potatoes aren’t just good to eat, they are very nutritious too! Potatoes are incredibly filling, yet contain only 110 calories per average-sized (5.3 oz) pick. Full of vitamin C, they also boast more potassium than a banana! A decent amount of B6, fiber, and iron round them out, providing a decent punch of healthy goodness in every bite.

Low in fat they also have approximately 26 grams of carbohydrates and 3 grams of protein, making them a punch of energy to fuel body and brain performance. There are also many new studies into how they help lower blood pressure, and also are full of antioxidants if they have a purple-hued skin.

Unfortunately, there are concerns surrounding potatoes and your health. Most of these have to do with how they are prepared in fatty oils, butters, salts, and served with creams and cheeses, rather than the potato itself- but they are considered a high carbohydrate food, and have a high glycemic index (GI). The GI rates how high certain foods raise your blood sugar, and although we generally associate sweet foods with a higher GI, the long strings that make up the starch which is rapidly digested – thus raising the GI higher than plain table sugar. This doesn’t mean much for most people, but if you have diabetic concerns, they are a food you should eat sparingly and with knowledge of how it can raise your blood sugar. 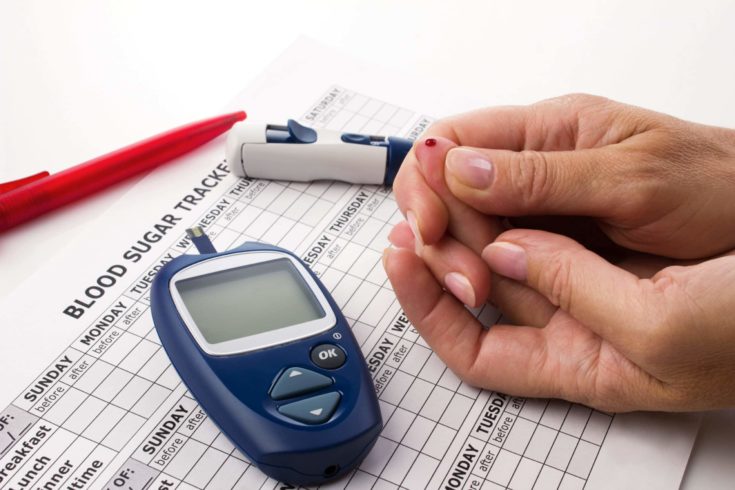 Another concern, which is truly almost not worth mentioning, but does deserve an explanation is about lectins. If you have been searching for an answer to the question of do potatoes have lectins, the answer is yes, but you need to understand what this naturally occurring protein is. Lectins are a carbohydrate-binding protein that binds with sugars and is important for developing immunity against diseases and pests in most plants. Can they be harmful? No really, unless you consume tons of veggies and legumes all at once.

If you have an allergy then you may need to take care of having too many at once, and it may mess with poor digestion, but for potatoes, this isn’t really a concern anyway. Why? Because if you have been wondering how to reduce or remove lectins from potatoes you are doing so just about any time you heat them up. And since you don’t eat them raw, you are reducing a good amount each time. The best way is to boil them or pressure cook them until soft.

There are over 200 varieties of potatoes in the US alone that fall into three different categories. Each has its own characteristics and cooking recipe recommendations, and some favorites are recommended below.

Starchy potatoes are high in starch and low in moisture. They are very fluffy when baked, boiled, and fried, and provide a light texture that lends itself well to creams, butters, and cheeses. They also provide the lightest, melt in your mouth french-fry. 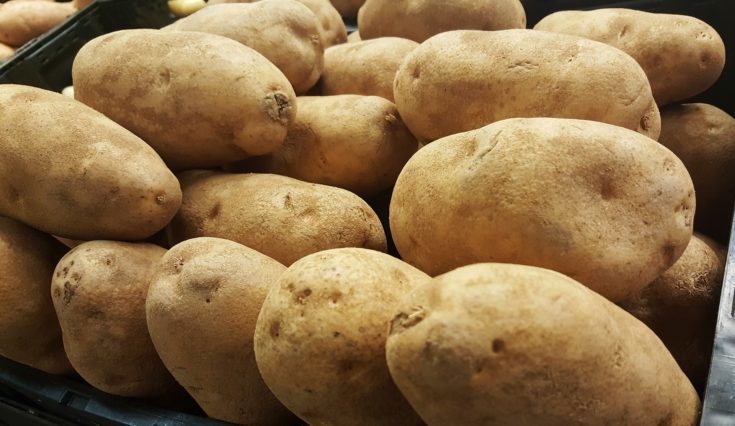 The fluffy texture of a russet potato is due to the low moisture content, which is exactly why it absorbs butter and creams especially well. This is the perfect baking potato for toppings or mashing.

Similar to russet, the flesh of a Katahdin is slightly yellow with a classic potato taste. They are the perfect french-fry as they crip up on the outside and leave a soft, flavorful center.

Waxy potatoes have a low starch content firm, creamy, moisture-rich flesh that holds shape when cooking. These make awesome roasted and boiled dishes and make the perfect choice for casseroles and potato salads. 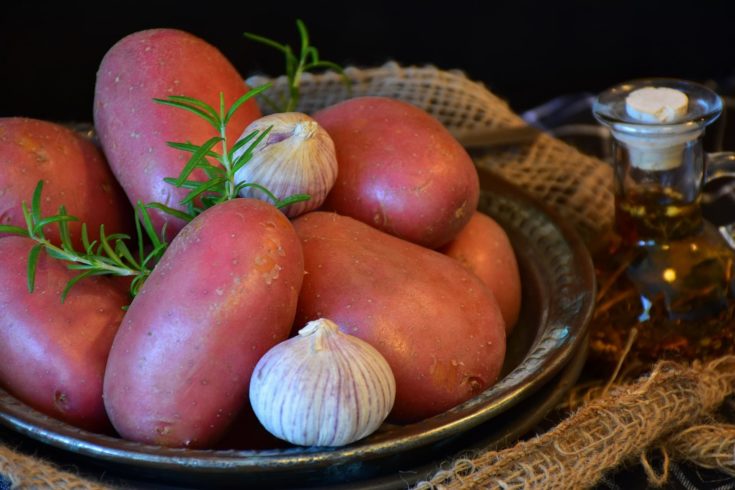 Red Bliss, or Reds, is a red-skinned potato with a white flesh. The firm, waxy texture is best for soups, boiling, roasting, salads, and casseroles due to how well they hold their shape.

The purple skin and purplish-blue flesh of this potato is not only unique, it is chock full of antioxidants and has a rich, nutty flavor that lends itself well to many different dishes. The slightly higher content than a red allows you to bake or mash, as well make into salads, cassaroles, and gratins.

Fingerlings are two to three inches in length and are thin, like a finger. They have a mild, nutty flavor and a soft yellow flesh that works wonderfully well boiling, baking, and roasting. They work well for salads but aren’t good for soups. 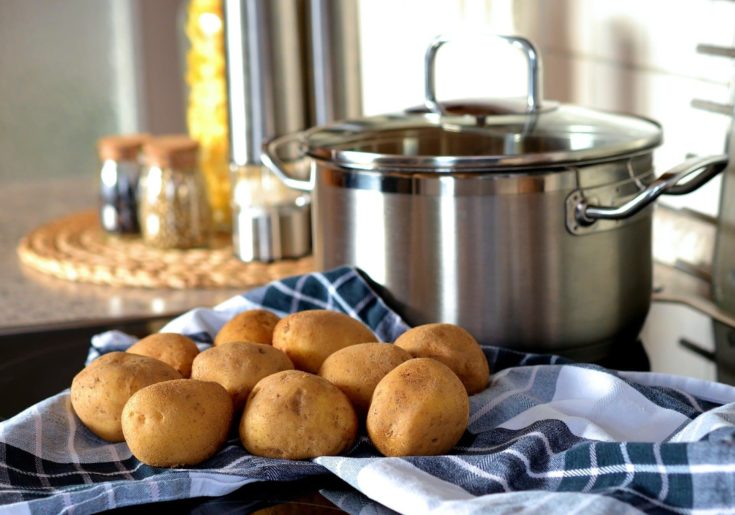 All-purpose potatoes fall somewhere between starchy and waxy varieties. Their medium starch content makes them a great choice for just about any cooking application.

Yukon Gold potatoes are by far the most well known and popular all-purpose variety. The bright yellow flesh is smooth and slightly sweet and lends itself well to fries, baking, boiling, grilling, pan-frying, and roasting.

How to Grow Potatoes

Potatoes are very easy to grow and you can plant them in both in-ground garden beds as well as raised beds, including containers as long as you provide them with enough depth for the roots to form potato tubers (12 to 18 inches will suffice). 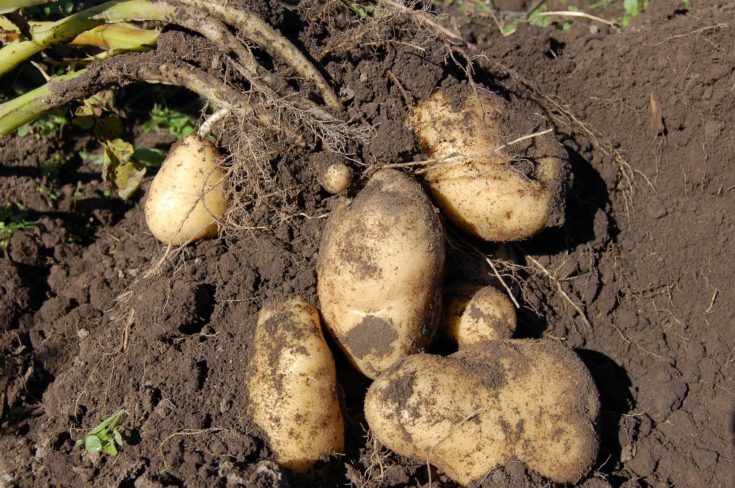 Loamy, well-drained soils are best for potatoes to form. Hard, moisture-retaining soils may not give enough for tuber formation, and sandy soils will drain too quickly, leaving your potato plants dehydrated and stressed. A slightly acidic soil, 5.0-7.0 pH is best, but potatoes adapt well even if soil conditions are less than perfect.

Seed Potatoes can be put in the ground in early spring, but will not grow until temperatures reach 45 degrees fahrenheit. You will want to protect against any hard, late-season frosts which will slow production. You can also plant in early summer to get a late-season crop.

Plant your ‘seeds’ in rows 6 to 8 inches deep and 12 to 15 inches from one another, Rows should be about 3 feet from one another. If you have limited space or will harvest potatoes when they are babies you can place them closer together.

You can either place your in a sunny, warm (but not hot) area a few weeks before planting to force the sprouting process, or you can cut them in 2-3 inch chunks to ensure you have an eye or bud present. Plant small potatoes whole rather than cut.

Potatoes need to be well watered for production. This is especially important when flowering and immediately after as tubers are being created and growing. When the foliage begins to yellow and die you should stop to allow for the curing of the tuber. 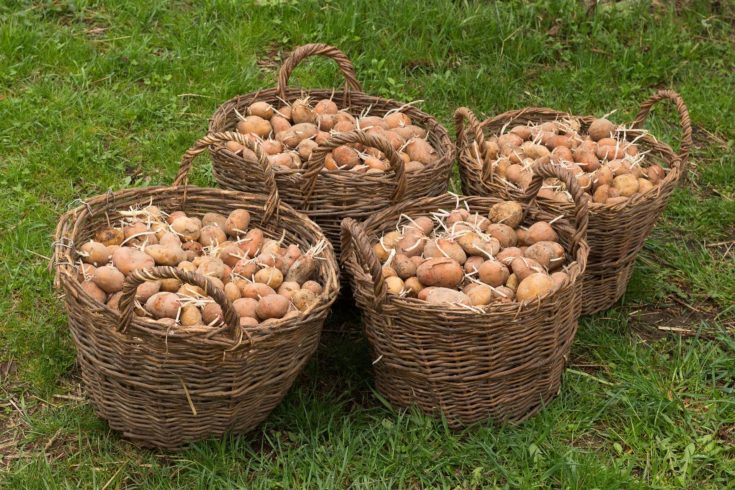 Baby potatoes are best harvested 2 to 3 weeks after the flowers have bloomed. Matured potatoes should be harvested 2 to 3 weeks after the foliage dies back. Dig gently around the plant to remove potatoes, or dig with a garden fork to help loosen soils. In dry weather, they can be left out for a few days to cure further, but if cold or damp, move indoors. Baby potatoes should be eaten the day they are dug to take advantage of their sweeter flesh.

A cool, well-ventilated area is needed for storage. Temperatures should also be between 35 and 40 degrees fahrenheit. Some varieties may store better than others. 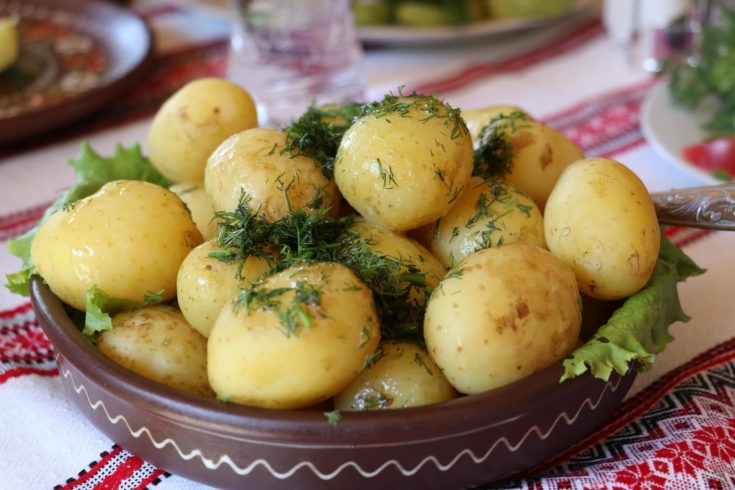 So there you have it. Potatoes are a nutritious, healthy, easy to grow, and environmentally friendly vegetable that is well worth serving up on a regular basis. Although they taste amazing slathered in butter, heavy cream, and other rich foods, they are excellent roasted with a little olive oil and seasonings and provide a much healthier option to take advantage of.

Hopefully, this article has been a bit of an eye-opener and provided you some information about the much-loved potato. The next time you buy some for your dinner, be sure to keep a few back to plant next spring!

Healthy Foods Under $1: Stock your Kitchen With Nutrient Rich Choices

All About Lettuce: Varieties and Interesting Facts

All About Strawberries: Your Favorite Red Fruit!

Giant Pumpkins: How to Grow and Care For Your Own

Scroll back to top
1shares