The Best Backyard Games for Everyone - Backyard Boss Skip to content
We are reader supported. External links may earn us a commission. 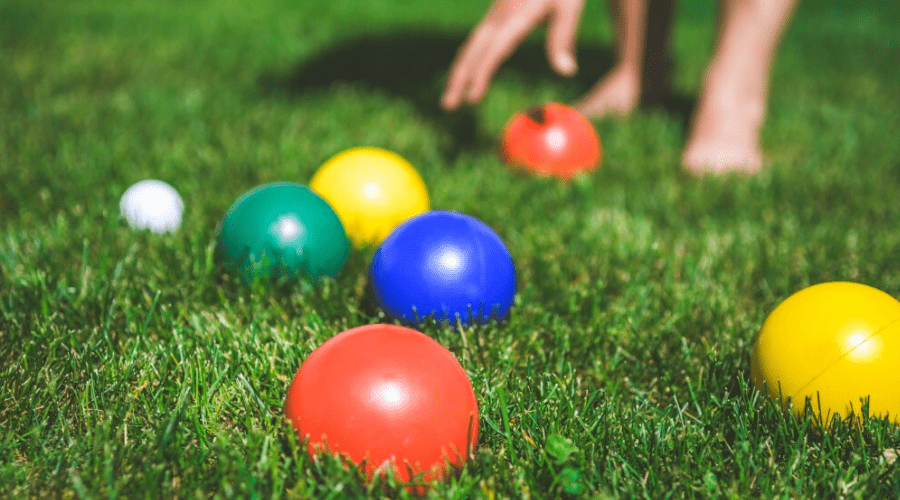 Having a yard is one of the most rewarding things you’ll ever get to posses in this lifetime. It doesn’t even matter if you’re single, sharing your life with a partner, living with relatives, or have children; yards are an amazing place for you to relax and enjoy a breath of fresh air without actually leaving the comfort of your own home. And since these dire times require us to spend more time at home than ever before, how about we give you some backyard activity ideas for yourself and the rest of the family?

Best Outdoor Activities for Everyone 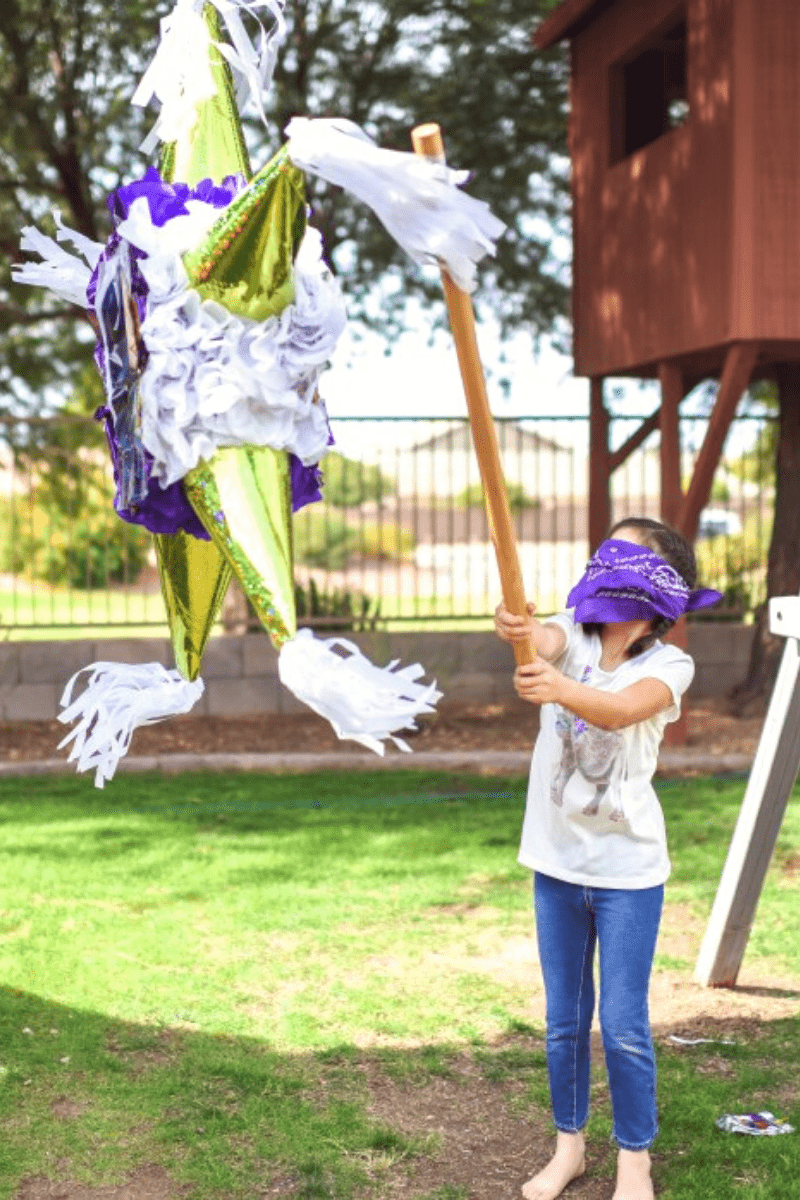 Backyards are such an awesome place to have some fun time with the family, but sometimes you might run out of activity ideas and aren’t sure how to engage everyone in an enjoyable activity that allows you to spend some quality time together. If you’re short on ideas, we might have some pointers for you.

We’ve put together a list of traditional backyard games that can easily be used in modern times when you want to bring adults and children together. Enjoy the trip down memory lane and encourage your kids to play some of the classics.

Ladder toss is a very old backyard game that’s suitable for children and adults alike. Ladder toss is basically a game that requires a ladder-like structure and something resembling a bola that can be tossed and has to attach to the horizontal poles of the ladder. It’s a game that’s usually played in a 1v1 setup, but people can team up and have two vs. two players.

This AmazonBasics ladder toss game comes with three red and three blue bolas. It also comes with two ladder-like structures made from PVC pipes that provide enough stability for the structure not to fall once the bolas touch it. It can be used both indoors and outdoors, but people who play it inside should be aware of the fact that the bolas might hit and break some fragile stuff, so it’s best that you play it inside only if you have enough space to do so (and get the breakable stuff out of the way). 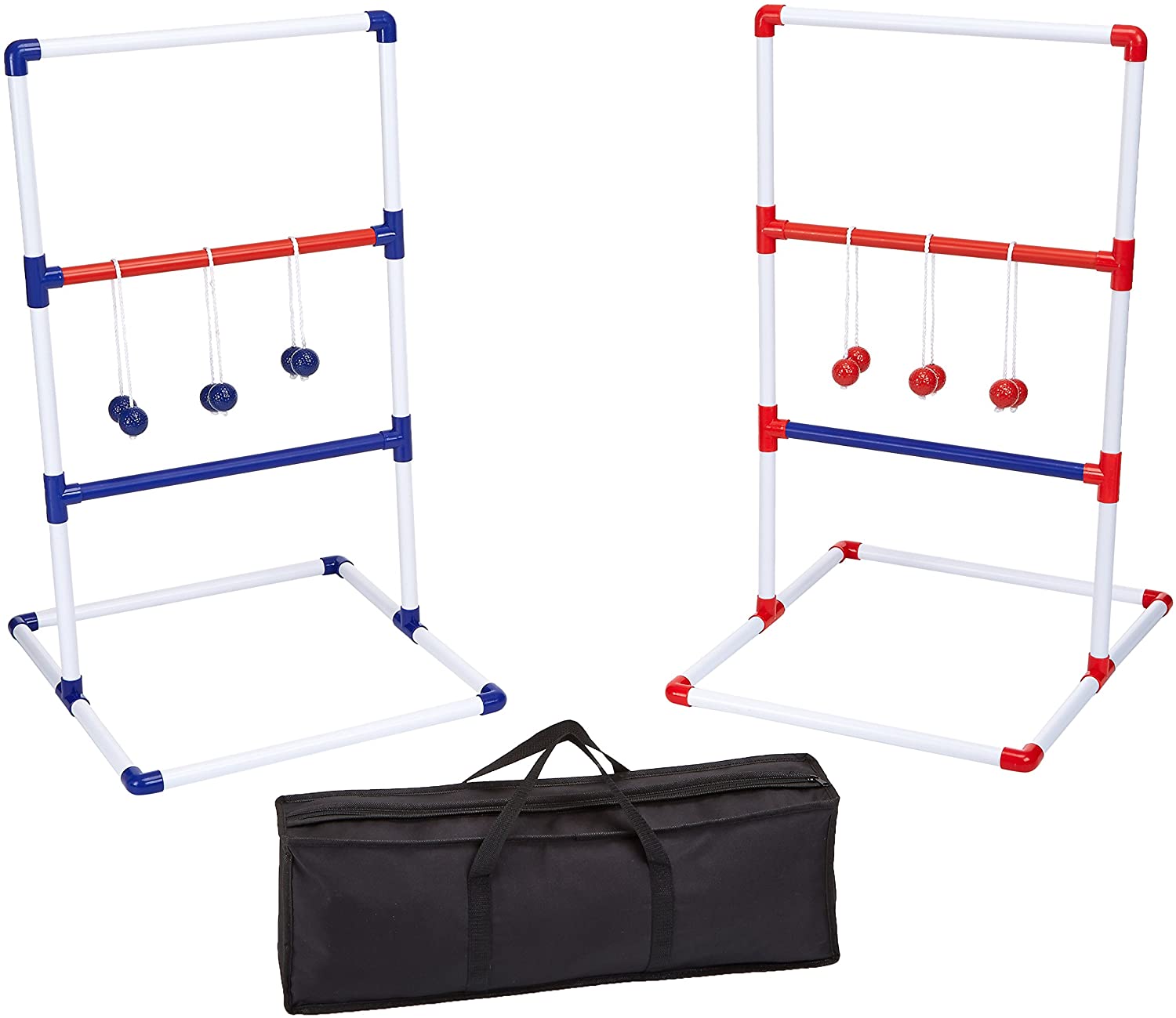 Ladder toss is a great game for adults and children who want an easy-to-play backyard game without any complicated rules. It’s perfect for families of four, and also makes a good purchase for people who want a portable game they can take to a picnic.

Best outdoor game for one player

Ring toss is another classic that we’d like to suggest for a fun backyard game. It is super easy to learn and all you need is a lot of practice in order to actually land the rings where they’re supposed to go. One of the best things about playing a ring toss game is that you can set everything up in less than five minutes, and then easily pack the game up and store it just as fast.

This game is actually really good for children not just because it helps you guys spend more time as a family, but because with all the exercise, the children can also get a breath of fresh air and improve their eye-hand coordination in a game that requires aiming and throwing skills to score points.

The game includes five rings made from rope and 10 more made from plastic which are available half in blue and half in red color. It also comes with a free carrying bag so that you can store it when not in use or take it with you whenever you want to have some fun at picnics, barbecues, parks, when going camping, etc. 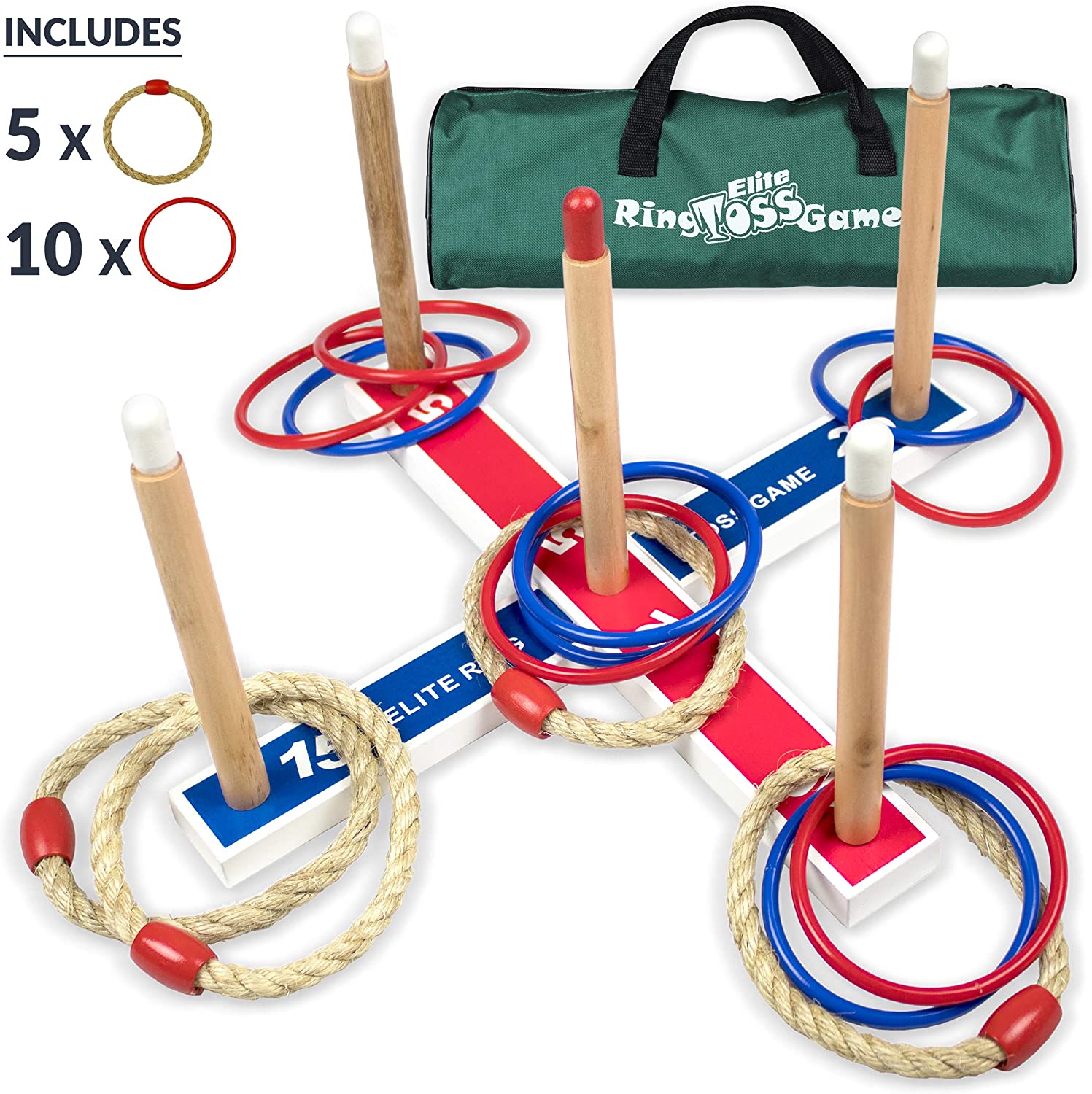 The ring toss game is excellent for parents who want to help their children improve their hand-eye coordination in a game that allows them to have fun and enjoy the fresh air.

The cornhole toss game goes by many different names (another very popular name for it being the beanbag toss) but the fun stays the same no matter what the name is. This is a team game that can also be played in a one versus one setup but is typically enjoyed by teams of two people that have to throw bags into a hole.

The set we’re looking at right now comes with two collapsible cornhole boards that measure 3 x 2 feet each. You can choose between different canvas themes, including an American flag or a football stadium canvas. The game includes two cornhole boards, but also eight bean bags (four red and four blue), plus a carrying case for greater portability. The entire set of rules is also included.

Since none of the parts can actually be ingested, it is safe for children of all ages to play this game, provided they are strong enough to actually throw the bean bags close to the opponent’s board.

If you’re looking for a chance to show off your tossing skills while enjoying a beer with your friends on a hot Sunday afternoon, the cornhole toss game is known for bringing out the competitive side in adults.

Bocce is a backyard game that’s a little more different than the others we’ve shown you today. It’s usually preferred by adults but can give it a go and try to teach your kids how to play it. It’s a game played with eight large balls and a pallina, which is a smaller ball and it’s also included in the GoSports set.  Bocce is a game suitable for two teams that can consist of any number between one and four players.

Your GoSports bocce kit includes eight balls, with four red and four green ones, plus the small pallina ball. It also comes with a very stylish carrying bag that has dividers for each of the balls to fit inside and not move around and make noise. The balls are made from high-quality poly-resin and are quite durable in time.

If you’ve never played bocce before, you don’t have to worry about looking up the rules, as the GoSports set comes with a set of complete rules and a measuring device to determine which team gets points at the end of the round. 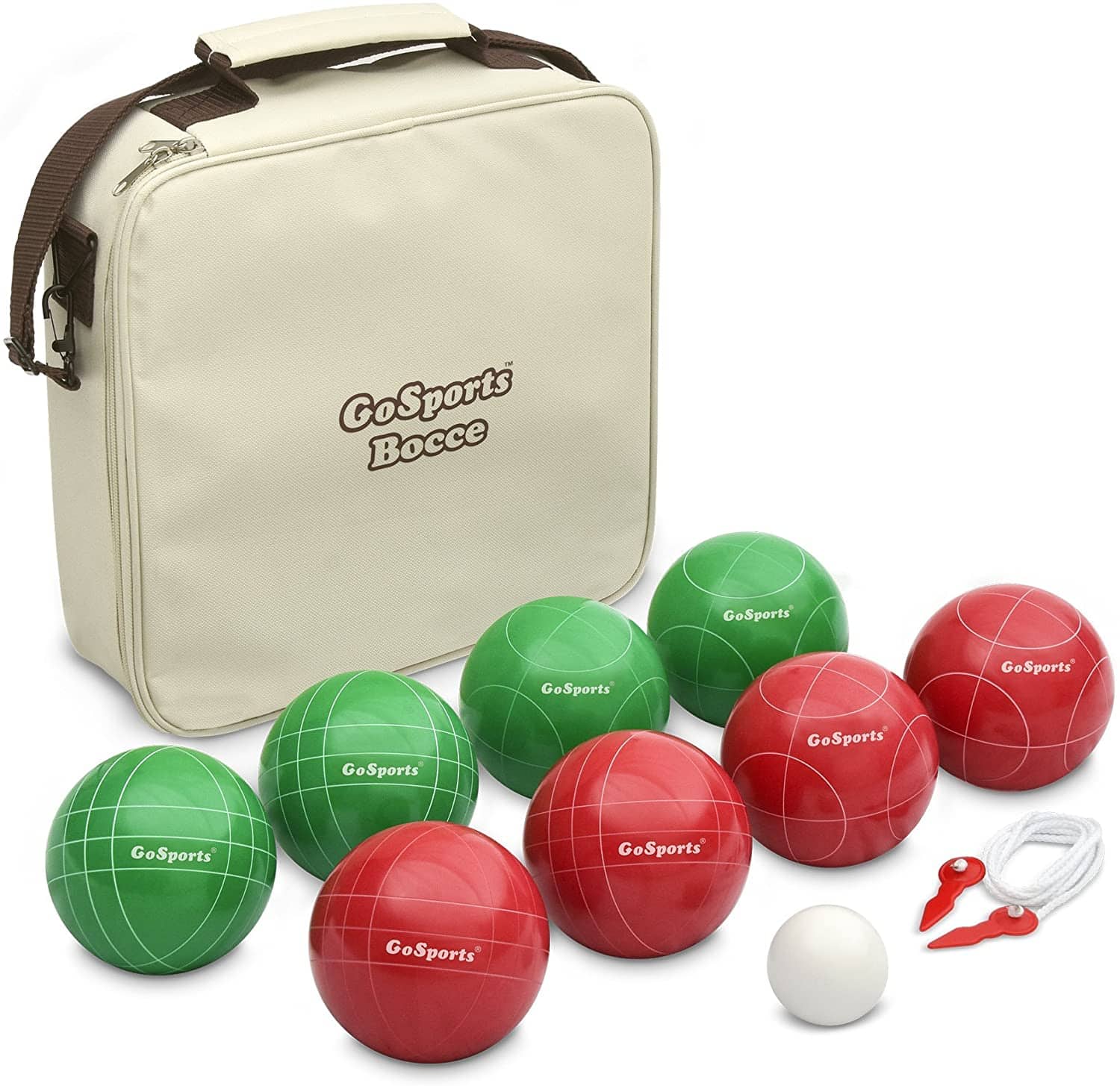 Bocce is a fun game for adults who like to have a chit-chat and enjoy a ball-tossing game and don’t mind having to measure the distances in-game to determine the winners. If you’re looking for BBQ party games ideas for adults, then this is a good choice.

What do you get when you combine the floor with an old-fashioned game of darts? FLARTS! This is basically an innovative way that reinvented floor darts with a focus on giving children a really fun time playing darts, but without the risk of actually giving them darts to throw. Instead, they will be throwing inflatable and absolutely harmless “darts”. Since each one measures 20 cm each, there isn’t any risk of ingesting them either.

The board itself is actually a mat that measures 47 x 47 inches and has a classic (but giant) dartboard on one side and a unicorn/monster-themed board on the other. It’s like having two games in one, which is a really useful way to use the back portion of the mat.

The package also contains four lawn corner pegs that are easy to stick into the ground and will keep the dart mat in place while you’re playing. The entire Flarts game can be set up in a matter of minutes, and if the corner pegs are dirty at the end, you can simply hose them down and wipe them with a cloth after. 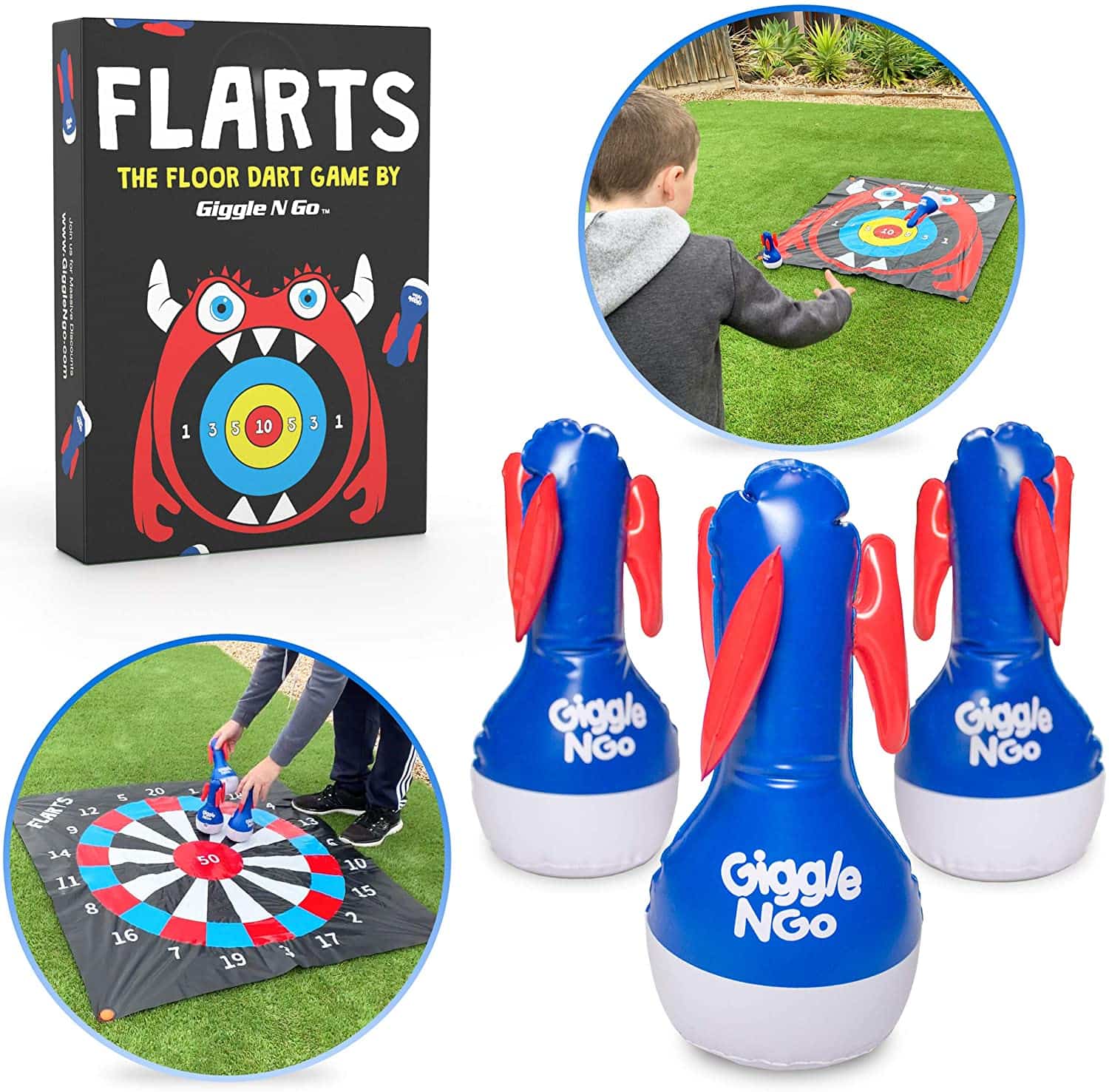 If your youngest is at least one year old, they can safely use the inflatable darts provided with the game, making it a great addition for families with small kids that still want to engage their little ones in a fun backyard game.

Engaging the entire family in some fun backyard games is a must for obvious bonding and leisure reasons. When you find the right games to play with your children, you can actually teach them really important notions (like how to be competitive and fair-play) and help them improve their motor skills while also getting them to exercise.

Even more, when you teach kids some of these games, you might actually give them something to do while you just relax to your favorite book and keep on eye on them to make sure they don’t get “too” competitive.