The Best Cordless Screwdrivers for DIY Projects - Backyard Boss Skip to content
We are reader supported. External links may earn us a commission. 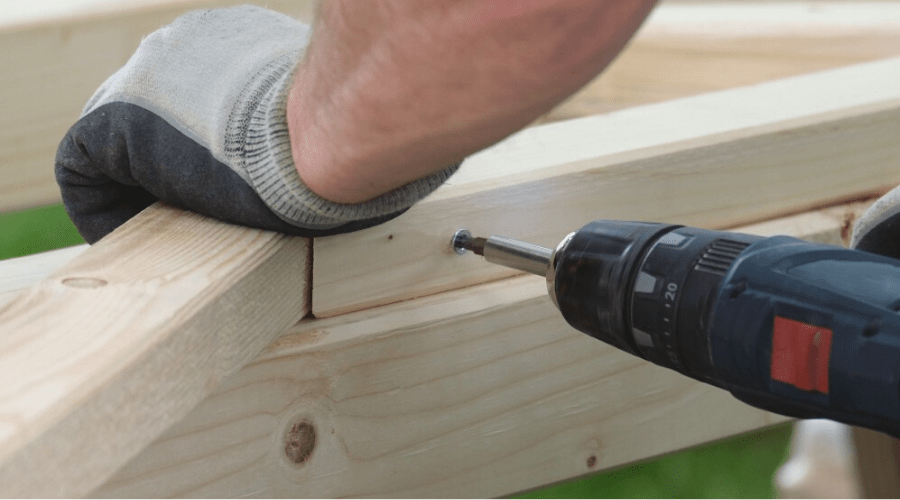 Using pretty much any cordless tool for a DIY project is a lot easier because who in the world likes to see wires all over the place? If we could all have wireless stuff around the house, we wouldn’t have to live the pain of having to try and hide them as best as we can. Besides, having wires around you when you work can even be dangerous, so if you’re looking to invest in cordless tools, today’s subject of focus will be screwdrivers.

As always, buying a new tool requires a deeper understanding of what that tool can do for you so that you can make sure you’re doing the right investment. Let’s alternate some of the pros and cons of a cordless screwdriver and see what you can expect from a product of its kind: 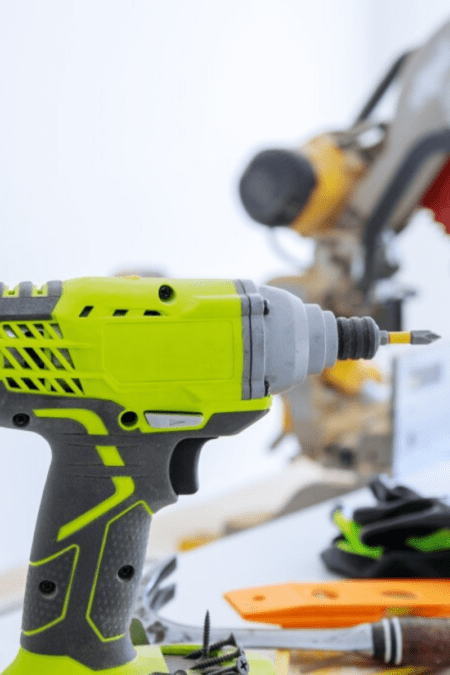 What is the Difference Between a Cordless Screwdriver and a Power Drill?

Unless you’ve been working with these tools for a while, it’s easy to confuse a screwdriver with a power drill. A cordless screwdriver is basically a motor-powered version of the classical screwdriver. It is a lightweight tool that’s designed to screw and unscrew, but it doesn’t replace a power drill. A power drill is mainly designed to drill holes into pretty much any surface, so these products aren’t exactly interchangeable.

What is the Best Cordless Screwdriver?

There is a good reason why our review round-ups are focused on providing you with a more extensive list of products instead of focusing on an absolute winner, and that’s because the term “best” is very subjective. For some people, the best cordless screwdriver is the one that has an extended battery life, while for others, it means the less expensive one. In other words, the best cordless screwdriver for YOU might not be the best one for somebody else. If you reach the second part of our article, you will see some of the best products in the niche, with an emphasis on what each of them is best at.

How do I Choose a Cordless Screwdriver?

Depending on what you need the most. There are a few features that every good cordless screwdriver should have, and we regret to inform you that high power isn’t one of them. The main benefit of using a cordless screwdriver isn’t the portability or the ease of maneuvering: it’s the fact that you can use it even when a power source is not around. That means cordless screwdrivers are powered by batteries, and they will never have the same amount of torque as a corded screwdriver does.

When you want to purchase a cordless screwdriver but aren’t sure what to look for, you need to ask yourself some questions first. These tools come with features that include integrated lights (so you can see what you’re doing even in the dark), rotating handles (which are good for maneuvering the tool in complicated spots and positions), USB chargers (so that you can charge the battery without a wall charger), and even battery indicators (so you know when you’re about to run out of power and plan accordingly).

How Much Does a Cordless Screwdriver Cost?

As you can imagine, there are different factors that influence the price of a cordless screwdriver. Such a product can be as cheap as $20, but there are models that exceed the $100 threshold. Not only does this depend on the brand of the product, but also the extras that are available with the purchase of the screwdriver.

It’s time to look at some of the best cordless screwdrivers that money can buy, with an emphasis on what each of them has to offer and who we’d recommend them to.

We have to start off with a fair warning: this DeWALT cordless screwdriver is a little more expensive compared to the other ones we have in store for you in the upcoming paragraphs, but you can rest assured that this is a high-quality screwdriver that will stick with you for years to come.

It comes with plenty of different features that are worth mentioning, like variable speed that gives you better control over the cordless screwdriver when you’re working on surfaces like plastic, wood, or light-gauge metal. It comes with LED lights to help you get a better view of what you’re doing even if you’re working in a darker spot.

The tool will notify you when it’s time to change the battery back, which is an 8V battery that has a charging time of one hour. You can also purchase the cordless screwdriver with two batteries, so you can always have a spare if you don’t want to wait between charges. The adjustable handle gives you the possibility to work with either pistol-grip or in-line. 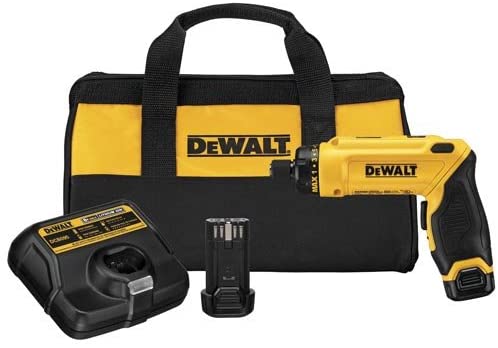 The DeWalt cordless screwdriver is a high-end tool for people willing to invest more money in a brand with good reputation and plenty of experience in making these kinds of power tools.

Best cordless screwdriver on a budget

Black + Decker offers this cordless screwdriver that’s compact and ready to be used as long as the battery is charged. It is powered by a 4-volt battery made of lithium-ion (similar to the ones used in different smartphone models). It has a handle with 3-position pivoting so that you can maneuver the screwdriver with ease, even when having to work in more awkward positions and postures.

The screwdriver is equipped with an independent flashlight that allows you to see exactly what you’re doing even if you’re working in a poorly-lit environment. That means that you can use the tool as a flashlight whenever needed, even if the screwdriver is not powered.

The screwdriver comes with two bits, but you might want to consider purchasing more as there isn’t too much versatility in terms of what you can just with just the two ones included. 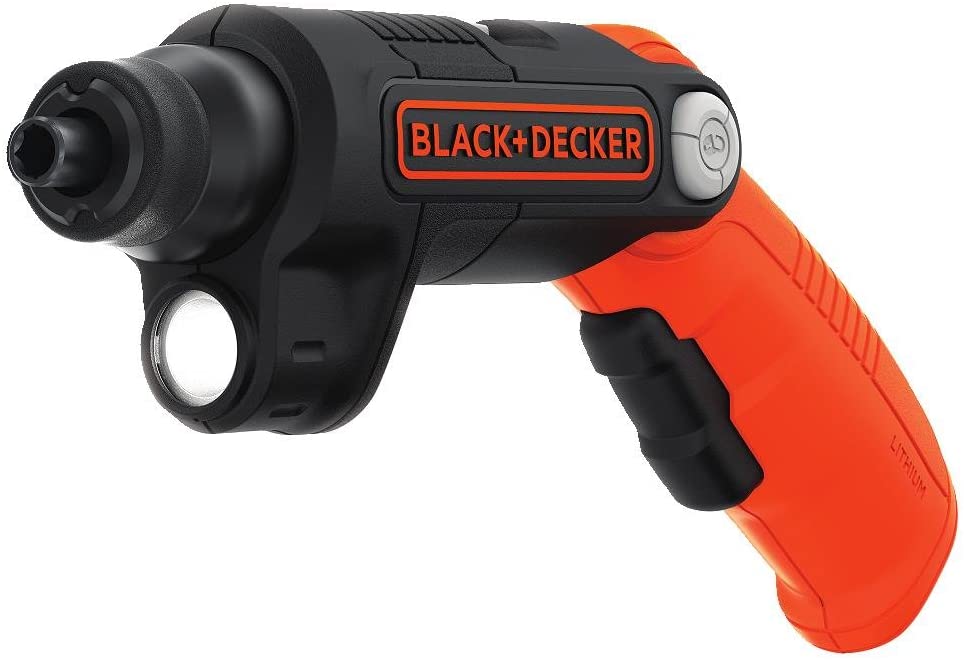 If you’re on the market looking for a cordless screwdriver but your budget isn’t too generous and you need to limit your expenses, this Black + Decker tool might be the right one for you.

The Hychika is another tool worth mentioning because it offers plenty of goodies and good specifications at a very decent price. Even if this can be considered a budget product, nothing about it feels cheap, especially when you take a look at the 36 pieces that come together with the tool, and which include different bits, socket wrenches, an extension bar, a drill bit, and others.

The screwdriver is equipped with an LED light that’s bound to “shed some light on the situation”, plus another rear flashlight that can be used in multiple situations and without having to turn on the screwdriver itself. It has a reverse switch that can really come in handy when trying to remove screws.

The rotation handle provides you with easier operation even when you’re working in uncomfortable positions. When you’re ready to charge the battery of this cordless screwdriver, you can either use the wall charger or the USB port and charge it directly from your laptop or computer. 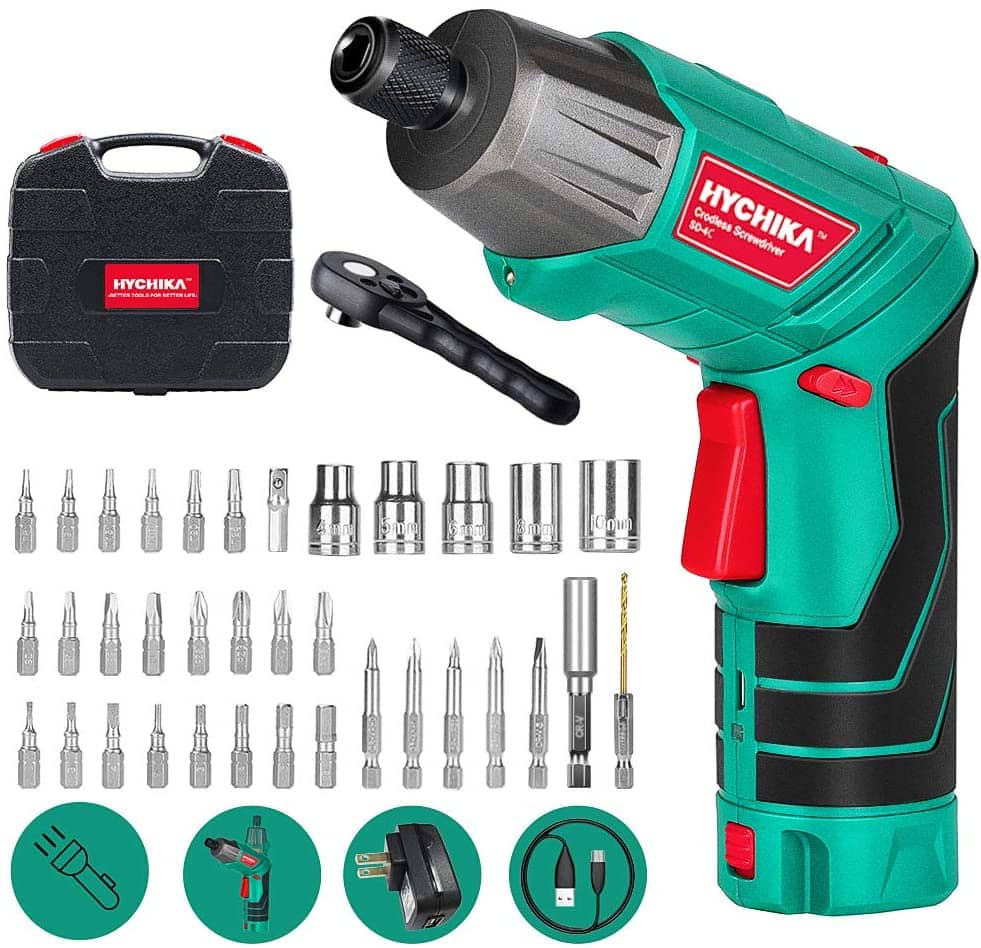 The Hychika cordless screwdriver is a good choice for people looking for an affordable tool equipped with plenty of features and included bits, and can be of really good use to people who fancy working on a lot of DIY projects.

The Tacklife screwdriver is yet another product worthy of being on our list because it comes with everything you’d expect considering its relatively low price. It is a lightweight and easy to maneuver tool that can prove to be a great companion in a variety of DIY projects.

It has two adjustable lights that are very useful when you’re working in a darker corner of the garage or when the ceiling light is behind you and you can’t really see what you’re doing. It comes with quick USB recharging and a battery capacity of 2000mAh. The three convenient lights will notify you on the current battery status, so you can plan ahead and never run out of power when you most need it.

The rubberized handle of the screwdriver makes it really easy to hold it even when your hands are slippery or sweaty. The set includes 30 different screwdriver bits that widen the range of applications for this tiny little helped, which means that you have a trustworthy tool for your projects for years to come. 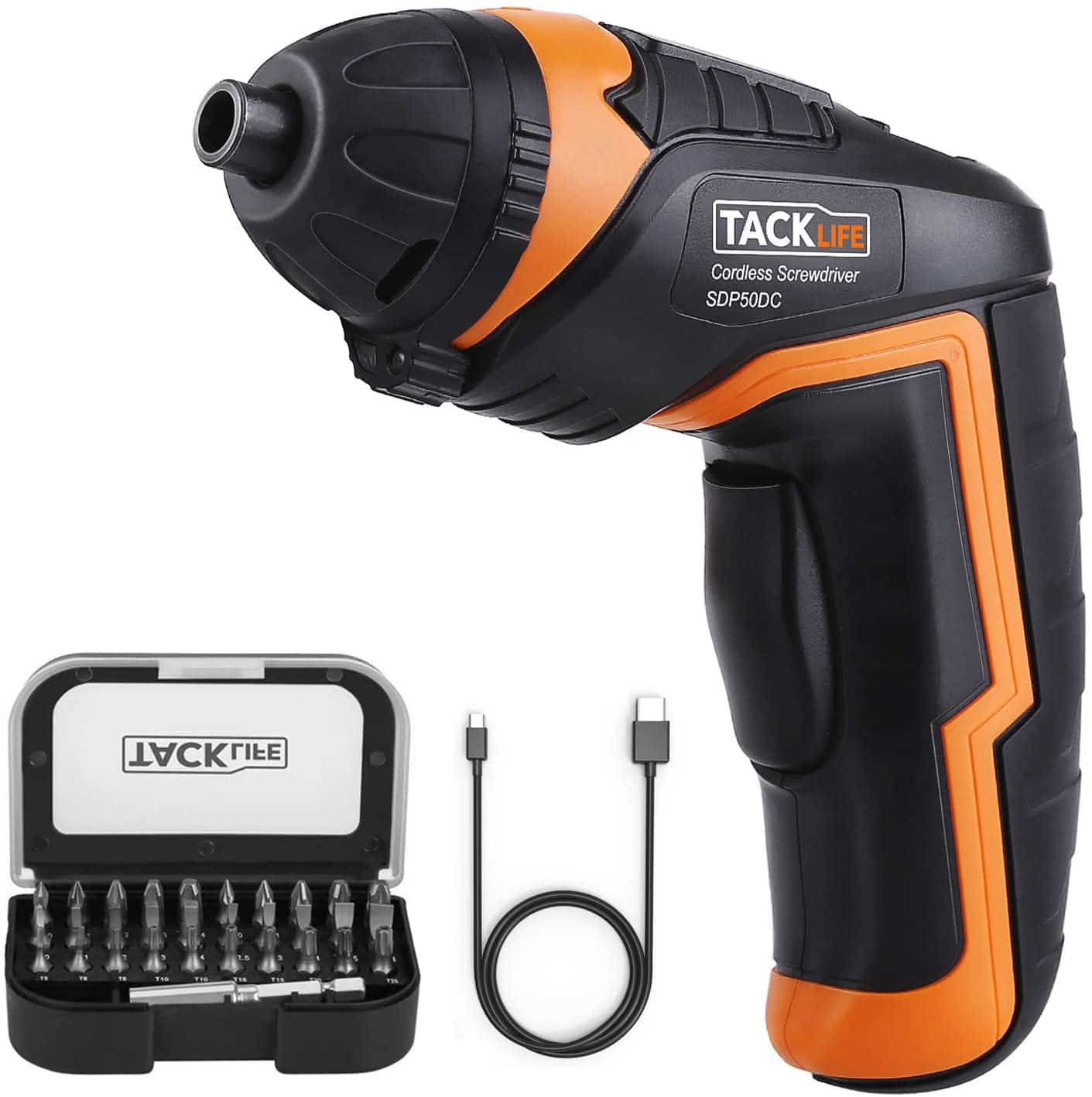 The Tacklife cordless screwdriver is a good companion for multiple DIY projects, including furniture repair, putting up a new coat rack, and hanging up those paintings that you keep behind the wardrobe.

We know that some of you hate shopping, so if there’s a product that comes with all the accessories needed for your particular situation, you’d like to know about it. In this case, it’s the TECCPO cordless screwdriver which includes a case filled with 45 bits and pieces needed to help you get the job done.

This beauty is equipped with 9 gears that offer different levels of torque and multiple power levels that will help you with a variety of projects. The spindle lock button allows you to rotate half of the tool so that you can easily access complicated spots and corners.

The generous case comes with 45 accessories, including sockets, and extension attachment, and a bunch of different screwdriver bits. The tool is equipped with both a front LED light and a back flashlight, plus a quick releasing chuck that allows bits exchange in a matter of seconds. 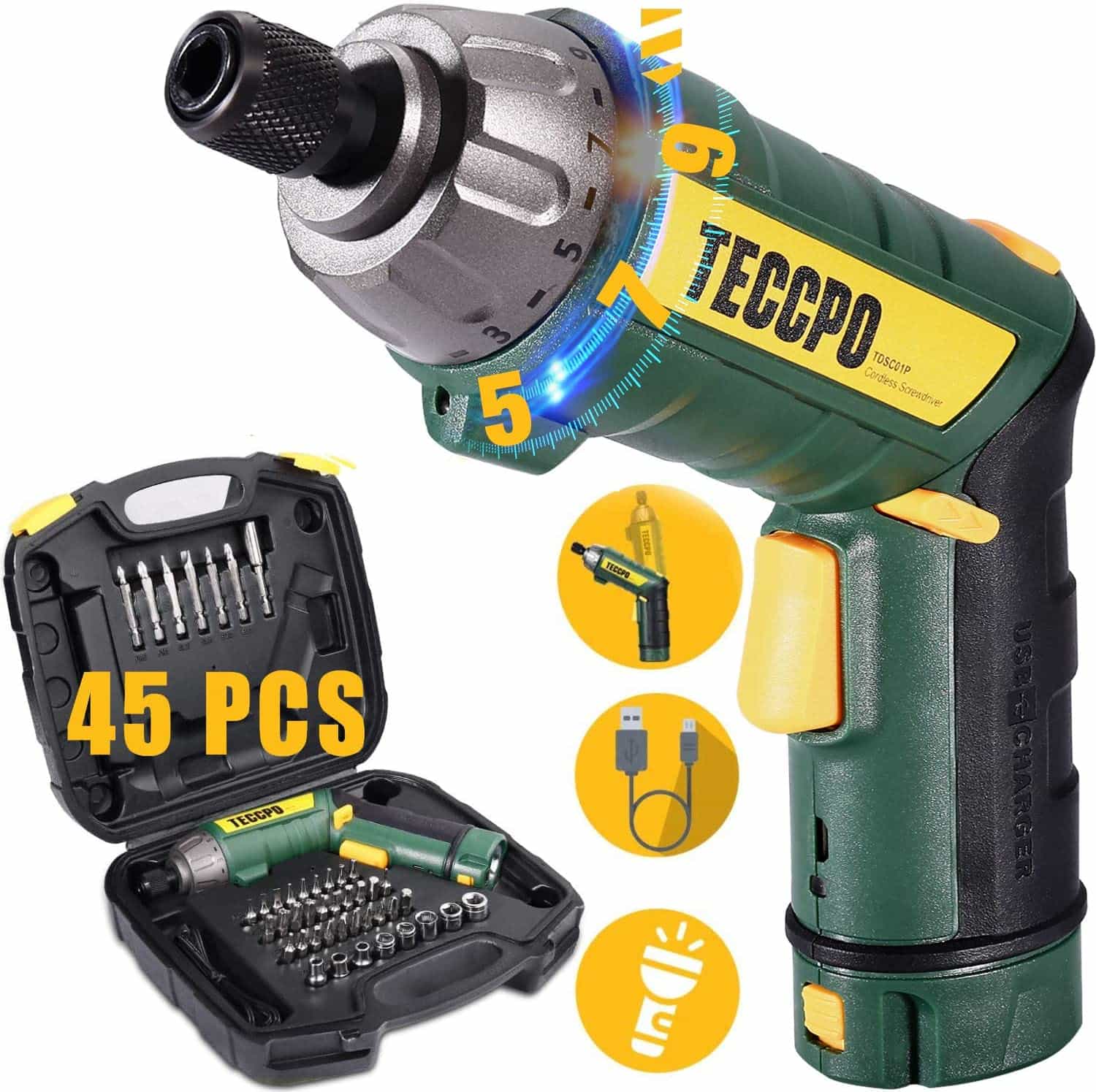 If you’re looking to spend money on a hassle-free cordless screwdriver set that comes with all the accessories you need for your home DIY projects, the TECCPO offers 45 different items to cover your needs.

When you’re looking for a cordless screwdriver for your home DIY projects, you can easily get away without having to spend too much money. Of course, more affordable tools might not provide you with the power you crave to finish every project, but you need to know that these tools aren’t all that powerful, to begin with.

Depending on your budget, you can get more expensive and more powerful tools, but for most of your average home needs, a $30 cordless screwdriver will do the trick. Make sure you look for features that are useful in any situation, like integrated LED/flashlights, quick release chucks for fast bit exchange, and included bits that will eliminate the need for extra purchases.

22shares
Scroll back to top
22shares