These Are the Best Garden Games for Kids to Play! - Backyard Boss Skip to content
We are reader supported. External links may earn us a commission. 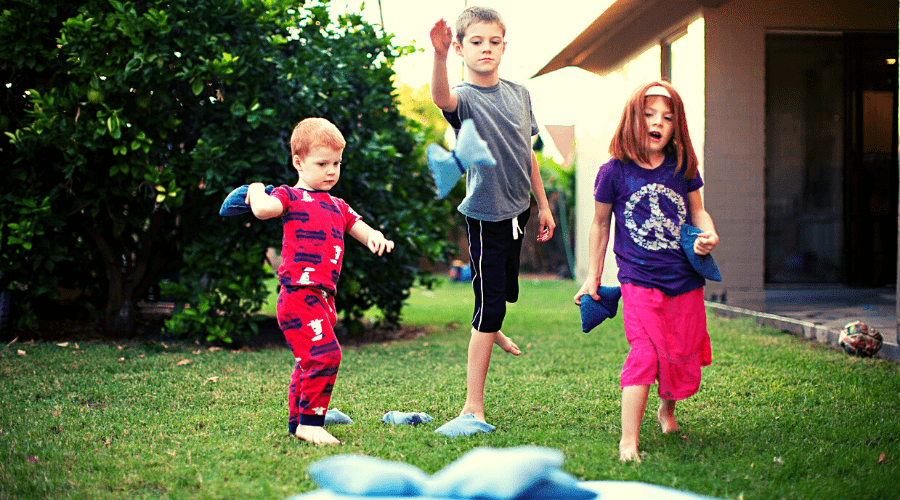 Yes, we live in the era of video games, and your kids are probably just fine staying inside all day. But having fun outside is still important for physical and mental health, and you should be encouraging your kids to take their Nintendo Switch off its dock and go play it in the yard. Just kidding! You should be encouraging some running around and active fun in the sun. These are just a few ideas for inexpensive outdoor games you can buy. You might even enjoy them too!

We recommend dry games, covered below, and water activities to help mix it up. 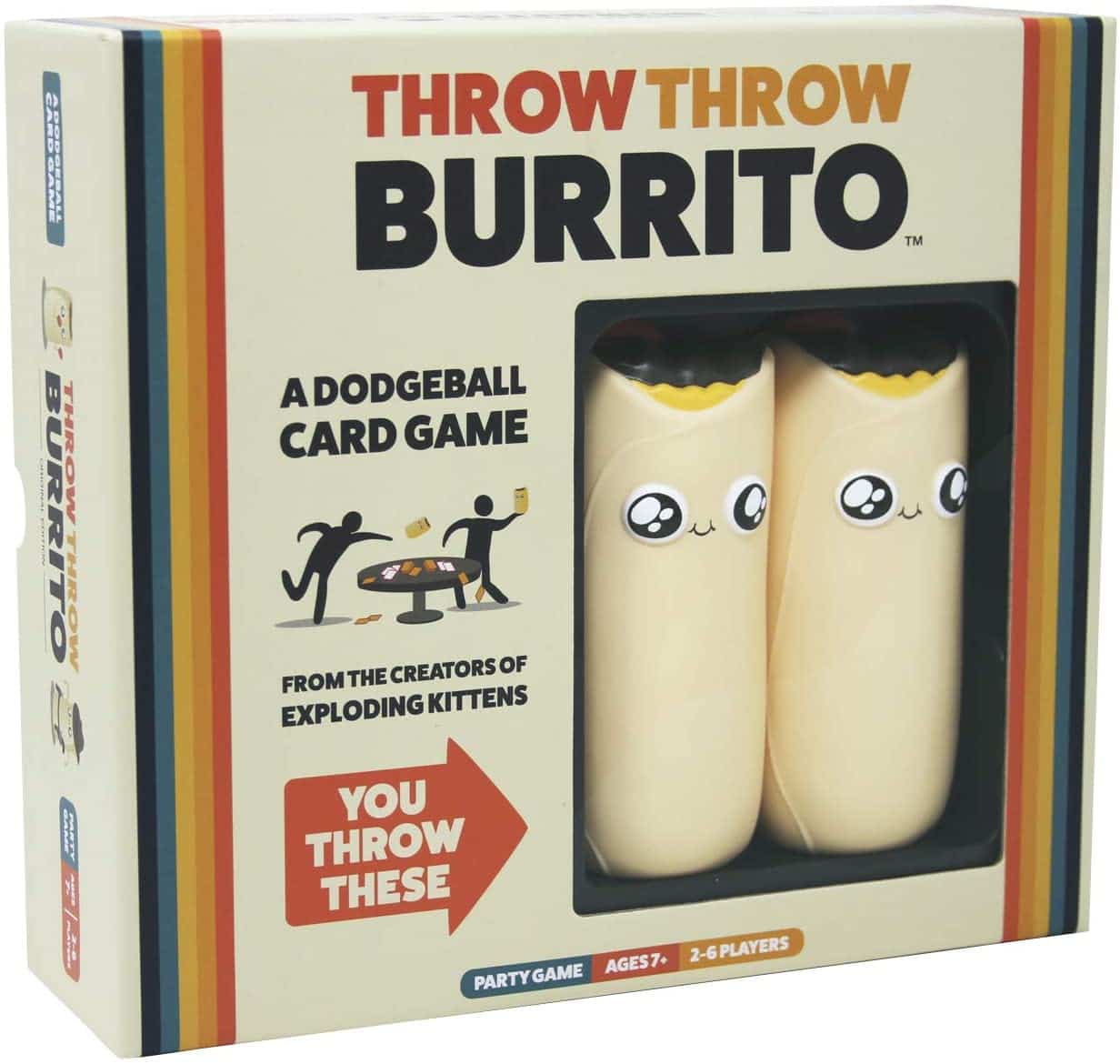 Throw Throw Burrito is a card game for children above the ages of 7 who are ready to engage in a highly competitive and ingenious game unlike anything they’ve seen before.

Every true board game fan on this entire planet has heard of (or owns) the famous card game Exploding Kittens. Well, the people behind that amazing game of cats, bombs, and tacos, didn’t just stop there: they released Bears vs. Babies, You’ve Got Crabs, and this gem right here: Throw Throw Burrito. As always, the name of the game stays very true to the baseline idea: you will have to throw a toy burrito at the other players.

And since we all know children love to throw stuff around (and that they should never be allowed to do that inside the house), Throw Throw Burrito will make a great outdoor game for you, your children, your 2nd cousin, the neighbors, other kids, and whoever else wants to join in on the fun.

We aren’t going to go over all the rules of the game (because, honestly, reading the rules made by the guys behind The Oatmeal is like half the fun), but these are the most important things you should know: this game is a best-seller, the card design is amazing, all the pieces are of high quality, and this is basically a game of burrito dodgeball. 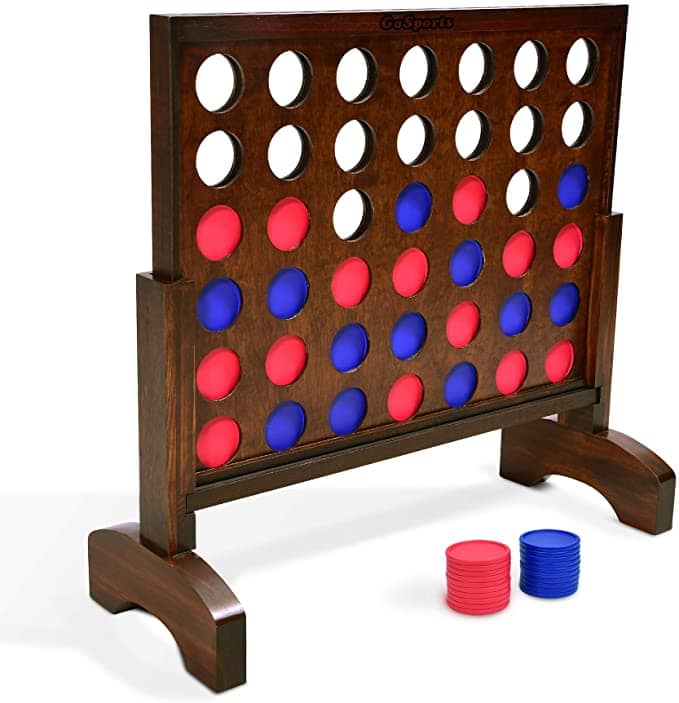 If you have two children and you’re looking for an excuse to get them to spend more time outside, this competitive 1v1 game might just do the trick.

Have you heard of the famous game Connect 4? What if you had the chance to play the full-sized version of this game? We’re pretty sure your kids won’t be the only ones stoked to play this.

Each of the players will take turns sliding a piece into the wooden board, and the first person to connect four pieces of the same color horizontally, vertically, or diagonally, wins the game. Not only is the game super fun for both children and adults, but the rules are also very easy to learn and the game gets really competitive the more you play.

Since the game measures over 2 x 2 feet, it is basically a giant yard size version of a game that most of you might have already played before. You will receive the case with all the game pieces, including a full set of rules that will make it easy to explain the game to your kids. 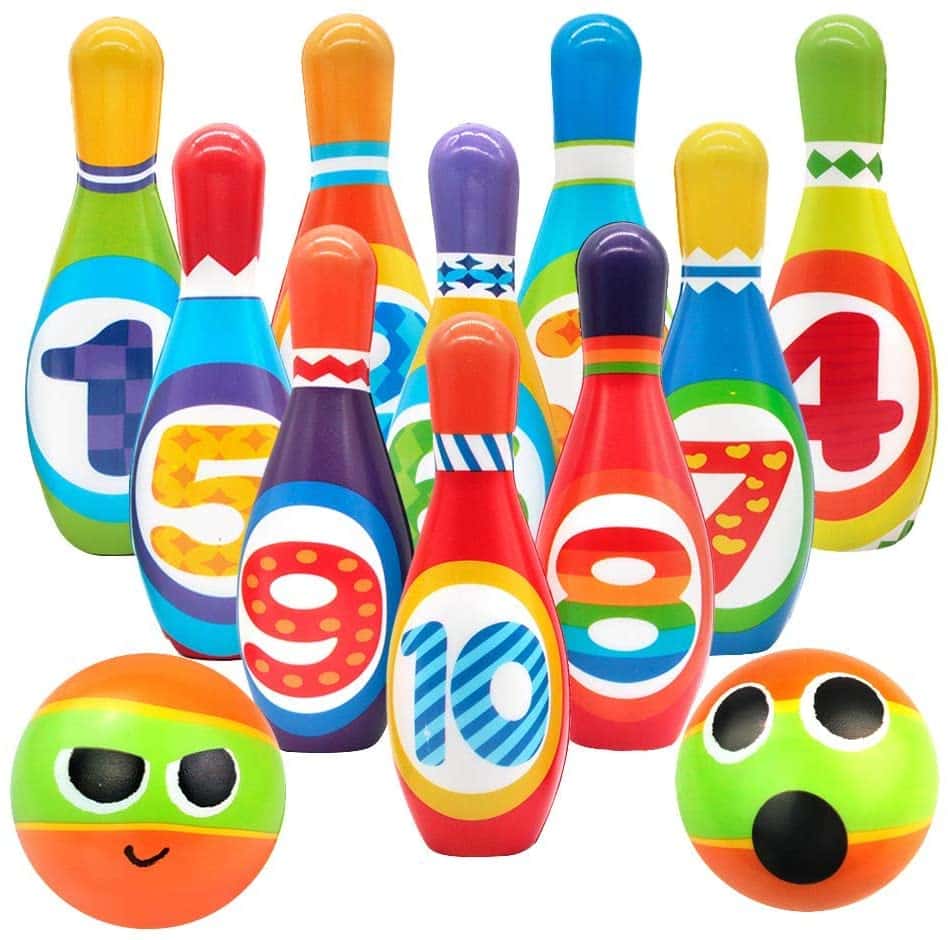 This bowling set is the perfect gift for children above the ages of three who love colorful toys, like to throw around balls, and could use an introduction to the world of numbers.

What could be more fun than bowling, especially when you’re young and fascinated with everything around you? This bowling ball set right here is perfect for toddlers who are learning their way around the world, as it comes with a bunch of colorful numbered pins, some cute-looking balls to throw , and a soft material and construction that will prevent any kids from getting hurt.

The pins are an excellent way for toddlers to learn more about numbers and organization, while the colors are an excellent visual stimulant because what child doesn’t love colorful toys? It’s a game that can be played both outdoors and inside, and it’s a wonderful investment for parents who are on a tight budget. 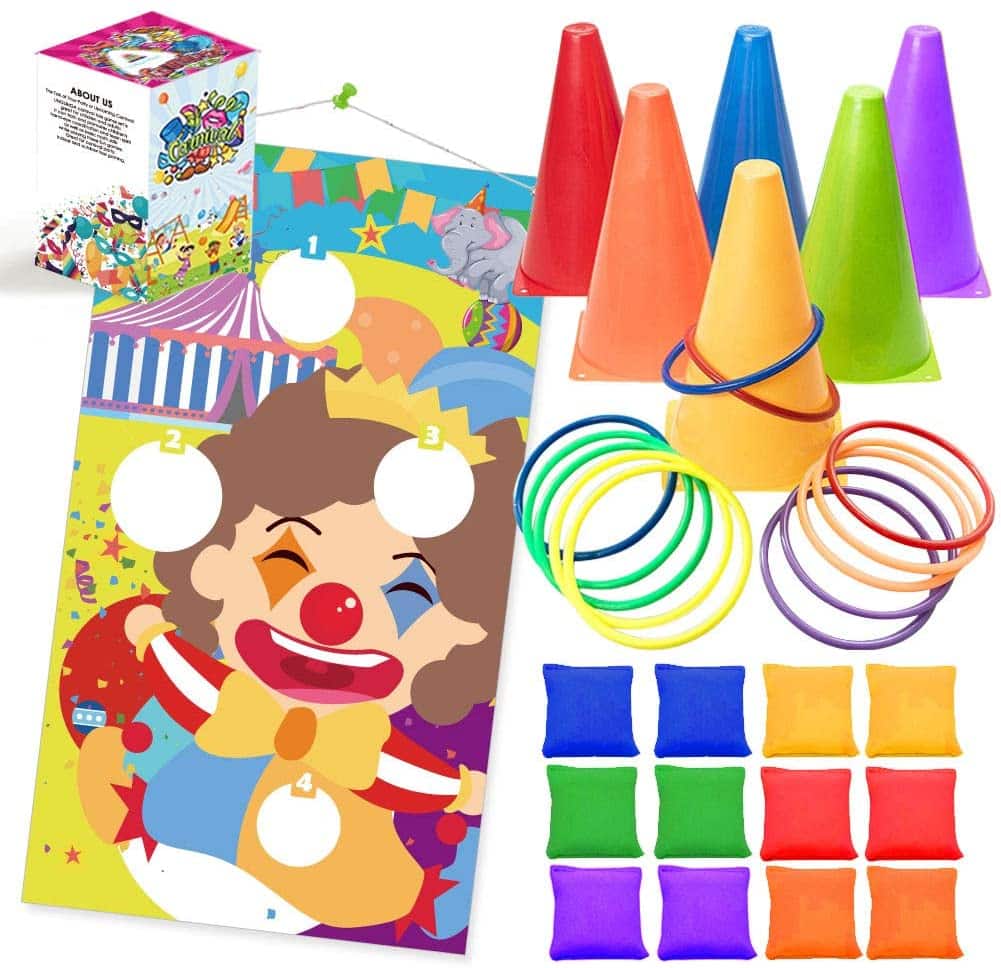 If your child has many friends that often come over for playdates, or if you’re looking to throw a kid’s party in the future, this set is a very affordable solution to setting up a small garden carnival.

Are you looking to throw a children’s party anytime soon and need props to keep them entertained? Then this kit might be just what you’re looking for. This is a set of different outdoors games for kids that includes 12 rings for tossing, 12 bean bags, 6 training cones, and one toss banner. The rings, bags, and cones are available in six different colors, so that multiple children can participate in these fun activities.

This is basically a kit that offers multiple games in a single package, such as the clown toss game which encourages children to improve their hand-eye coordination skills by throwing colored bean bags through the holes in the banner. The ring toss game is another one in the kit that works on improving the same skills, but by using plastic cones and rings. While we do love the idea of multiple games in a single pack, some of the pieces probably won’t last more than a season or two. 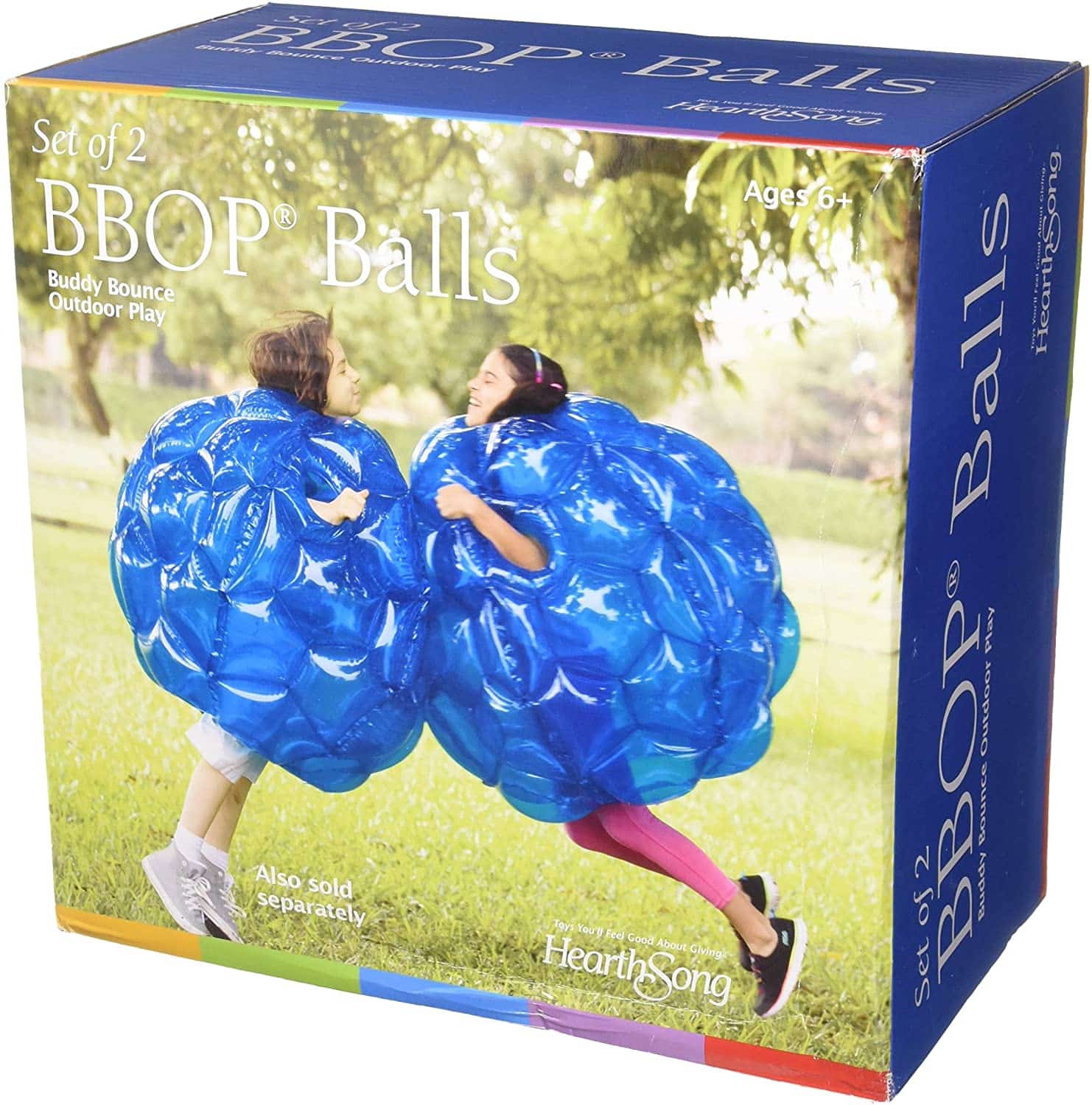 Have you seen those movies with kids that wear giant inflatable balls around them and just bump into each other for the giggles? This is one of those giant wearable suits that kids will get a blast from because it’s a fun and safe way for them to get rid of all of that energy. The suits are made from PVC vinyl that promises to resist wear and tear while also keeping the kids safe.

They are designed to encourage as much physical activity as possible, and you can invent fun games with them that will get children even more into the idea of the suit. Each package contains two of these suits and you will also receive a set of patches that will help repair any potential holes that might deflate the suits.

Benefits of Playing Outside

We have always been told that it’s important to spend as much time outside as possible, but have you ever wondered why? Here are some of the main reasons why children should play outside even if it’s going to take a little bit of effort to get them out there:

Sunshine is  a great source of vitamin D, and as long as your children wear sunscreen with high SPF (yes, even when it’s cloudy, because the sun’s ultraviolet rays are still there), they should be out there at least a few hours per day. Sun plays an important role in multiple body processes, including our immune systems.

After waking up in the mornings, at least 10 minutes of sun exposure to soak in that vitamin D can actually help with symptoms of anxiety and depression. It’s a necessary way to start anyone’s day.

The second most important benefit of having your kids play outside is (as you can already imagine) exercise. Children should do a minimum of 1 hour of exercise every day, but playing outside for longer doesn’t hurt. It’s true that in dire times (and for those of you that live in an apartment and don’t have a backyard), indoor exercise can serve as a substitute, but children will surely find it more fun to ride an actual bike rather than a stationary one.

It might sound weird, but when you allow and encourage children to play outside, you are actually teaching them more about taking risks. There is always the chance they might fall and scratch their knees while they’re playing hide and seek or soccer, but this is just part of the growth process. There is so much to learn from situations like these. Children who play outside frequently tend to be braver and end up becoming better leaders.

A Love of Nature

Children who spend time outdoors learn to love nature. The more children stay inside, the more reluctant they become to face the unknown. Going outside and taking a breath of fresh air while admiring nature’s wonders doesn’t feel as pleasant or as special. Having your kids spend more time outside means getting to show them how to take joy in the little things, like blooming flowers, birds singing, and even a cool raindrop in the middle of a hot summer.

Most of the games that can be played outside often allow a larger group of kids to participate, which can improve your child’s social skills and teach them about competitiveness, manners, and how not to be a sore loser (my kid never loses, but yours might).

Which Games Do Your Kids Love?

As long as you can get your children out of the house and convince them to spend at least a couple of hours outside every day, it doesn’t really matter which outdoor games you opt for. You can consult with your child and see what types of game they’d like to play– there are many great options that are exercise-oriented, logic-oriented, or both!

What’s your favorite outdoor game for kid? Share in the comments below.

22shares
Scroll back to top
22shares