58 of the Best Indoor Water Feature Ideas Skip to content
We are reader supported. External links may earn us a commission. 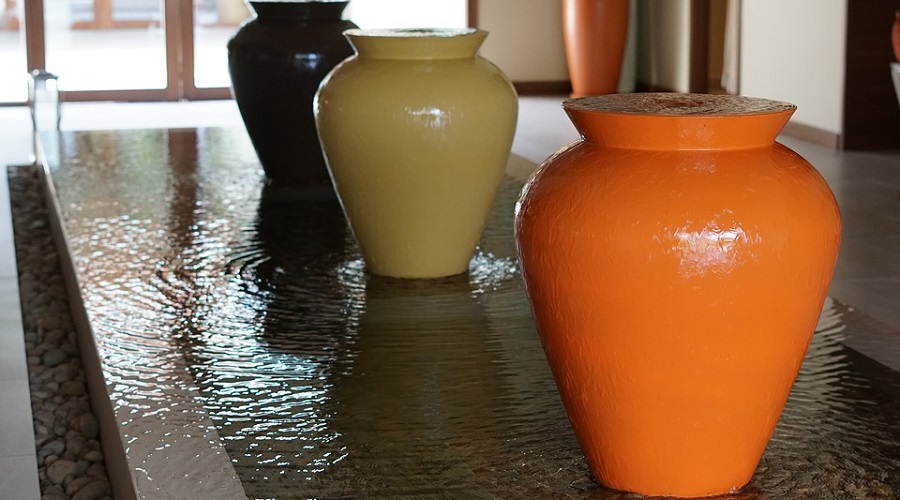 Water has been reckoned as a colorless, odorless, and transparent liquid. Although that is not the most stirring description, we know it forms the seas, rivers, and lakes and is the basis of fluids of all living organisms. Over time we have imbued water with various symbols, associating it with peace, cleansing, and vitality.

Rather than looking out to large bodies of water, the same sensations of peace and vitality can be introduced to living spaces through indoor water features. These ornaments come in many shapes, sizes and designs; from large water-bending panels to quaint cascading fountains. With a water feature, simple streams of water can be transformed into artistic displays that can enliven any living space.

This fountain features a large glass panel from which water streams down. The glass panel is framed with an array of brown tiles which is inspired by an Apache design. At the base of the fountain is a protruding tray of pebbles in shades complimentary to brown tiles. Given its large size, it would make a great room divider or entrance piece against a wall.

Cascading water features are relaxing and fascinating to look at. In this case, the arrangement of these clay pots and the way in which the water flows from each one to the next makes it a pleasant water feature. It is able to stand alone, doesn’t take up much space, and has a very subtle color, allowing it to blend in with its surroundings.

Reminiscent of architecture in the Mediterranean, the styling of this tiled fountain is simple yet classic. The two small columns upholding an arch crown a small bowl and two pools below. The small bowl is mounted onto the wall against a pattern of tiles and is the starting point for the fountain. Water flows down from the bowl into a small pool that has an opening that resembles the zig-zag of a staircase.

From this opening, the water flows into the larger pool. Both pools are in the shape of a semicircle and their edges are bordered with a pattern of tiles that stand out from the white background. This fountain definitely grabs attention not only with its amazing design but its considerable size, making it best suited for large rooms.

Inspired by the temple tanks near Indian temples, this water feature emanates the spiritual atmosphere of sacred puja rooms. The main body of water is a sunken pool with a floor of pebbles. Above the water are decorative stepping stones and, mounted on the wall, is a small waterfall. What gives this feature its appeal is the natural lighting that highlights the water and pebbles below, as well as the surrounding ornaments and furniture.

This fountain is portable in size and bears a decorative design. It lies well between modest and elaborate as a water feature with its small spurt and ornate table legs. Whilst it can be placed in any room without taking up much space, it needs to be connected to water with a pipe in order to function.

6. Mounted Waterfall Under A Staircase

A great way to decorate the space under a staircase is with a water feature. This mounted waterfall can fit right under the stairs and doesn’t look hidden. The simple feature comprises a waterfall mounted against the wall and a pool that matches the width of the staircase bordered with tiles that match the wall.

7. Water Streams From The Ceiling

This feature is probably on the more daring side, with water streaming from the ceiling and all, but it is a picturesque arrangement. The wooden panels that make up the ceiling have pipes attached to them that emit a steady stream of water. This water falls into a wide sunken pool divided by large stepping panels that rest above the pool, on the same level as the floor.

8. Mosaic Tiled Waterfall with Up Lighting

This waterfall has individual streams rather than the collective outpouring that a paneled waterfall has. The mosaic tiles are sunken into the wall and there are two sets of down lighting that call attention to the tiles and the water streaming down. At the base is a tray of rocks that extends in line with the wall. Overall, this waterfall is nicely tucked away and can be put alongside bookshelves or tv sets.

Extravagant in every sense of the word, this water feature is a definite show-stopper that sees the fusion of plants with piscinas. The water garden features wooden decks for walking around and the main ramp that is surrounded by indoor plants and small sunken pools. The pools of water are sectioned off with borders and above them are plant beds.

10. Sunken Pool With Sculptures Under Staircase

Revel in still waters below the staircase with a figurine or two. This is another great way to use the space under the stairs with the feature being perfectly visible.

These trimmed panels have an imposing quality about them; they make for striking room dividers or centerpieces in a room. The up-lighting adds a dramatic element to the water as it streams down the glass.

This water feature is a unique take on a sunken pool. The floral design of the pools and the surrounding flooring gives off a bohemian inspiration. Despite its size and low spurt, it makes for a relaxing fountain and beautiful focal point for the room.

A gorgeous ceramic fountain for you to enjoy everlasting solace with. This fountain adds a special level of elegance to your home. Its simple dynamic makes it an easy addition to your living space, and with a gentle stream, won’t distract you from your daily tasks around your home.

This is a fountain that won’t take up space and can be moved around. It has a simple yet sophisticated composition with the reeds and bamboo stalks suggestive of a Zen garden. Can be placed on tabletops or large window sills too.

If the straight water panels were getting a bit boring, try the curved water panel on for size. Much like its straight variant, it can be a great room divider or it can be placed at the entrance of a room. Its distinct design makes the water streaming down all the more fascinating to watch and it’s an automatic conversation piece.

Spheres hold the key to life, believe it or not. All cylindrical surfaces bear beauty in their roundness and have the ability to bring fruition to your state of mind. To have the luxury of water soothing your inner being in the form of straight lines.

Similar to the clay pot ensemble the water flows downwards from one bowl to the next. The up lighting in the bowls is a nice touch that gives the flowing water an ethereal appearance.

Scaling down the average cascading feature by a lot is this miniature cascade that comprises a cute orb outpouring a steady stream onto mushroom tops. This fun-sized waterfall is perfect for decorating tables and counters.

This is the paneled waterfall scaled-down and instead of glass or mosaic tiles, there is a slate. It is framed at the top with down lighting that plays up the water as it glistens down the slate onto the pebbles on the bottom frame.

In this water feature, the water flows down the granite wall into a little pool. The down-lighting illuminates the water at an angle as it is placed in front of the stream instead of being directly above it.

Aquariums are the original indoor water feature; they are fascinating to look at and allow for a lot of customizing. Aqua-scaping styles range from simple nature aquariums, a Japanese-inspired Iwagumi style, and a Dutch aquarium.

If you have the space and the budget to invest in a top-of-the-line fountain, then this is the one. The metallic framing in conjunction with the natural rock selection is an incredible team for sanctity. It’s a magnificent piece of solace and can bring you luxurious joy at the snap of a finger.

This design is a popular outdoor water feature, especially for outdoor swimming pools. It comprises a mound of rocks with a ledge that hovers over a pool from which water pours. This feature can be accompanied by a small pool, but it would work better with an indoor pool.

24. Low Shooting Fountain And A Stream

This fountain encapsulates the surroundings and tranquillity of a riverbank. The low shooting fountain overflows and pours into a narrow stream that is bordered by plants. This stream lays low and was built against a wall making it an unobtrusive feature but too wonderful to miss.

Although water features aren’t expensive to run (depending on certain conditions) and considering that some fountains, waterfalls, and cascades need a pump of some sort, this installation is an option that doesn’t require one. The stream is an illusion whereby it appears that there is a flow of water when there isn’t one. By using pebble strips and placing them in a large water barrel or a fountain installation, you can create the illusion of a water stream.

Natural stones and an enormous basin give this fountain exactly what it needs to bring your home to life. Decorative in form and artistic in style, you now have the ability to destress anywhere you deem fit. Inspired by Asian culture, we guarantee you will cherish this tabletop fountain for years to come.

27. A Trio of Mini Fountains

Good things come in threes and these mini fountains are elegantly designed and well placed in this spacious room. Despite them being small they wouldn’t look as appealing in a room with less space.

This water feature is a pool that begins indoors and ends outdoors in an infinity pool. The indoor feature comprises water streaming from the ceiling into a sunken pool. The pool is narrow and has pebbles on its floor, which stretches through the house all the way to the outside.

Another miniature waterfall that’s perfect for tables and countertops. Its design is simplistic with the focal point being a rounded slab that the water flows down onto smaller pebbles and two bowls.

What Is the Best Material to Put Under a Swing Set?

29 Gorgeous Pictures of Bonsai on Rocks

35 Stunning Garden Bed Edging Ideas That You Need To See