The Best Kobalt Snow Blower - 2021 Reviews Skip to content
We are reader supported. External links may earn us a commission. 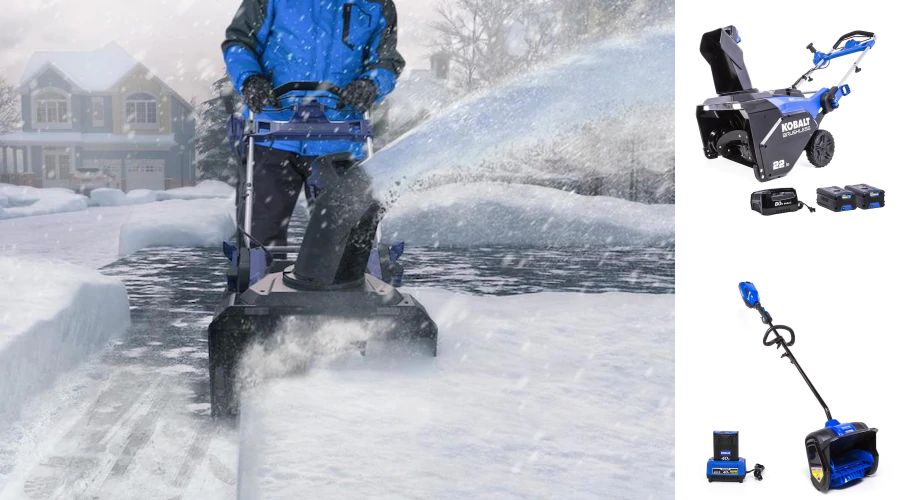 Can you afford to shovel snow every day or is it time to invest in a snow blower, yet? A snow blower will cost you a pretty penny, but it will also save you time, energy, and the post-shoveling pain. Let us help you choose the right snow blower for your needs. Here, we have rounded up your snow blower options with Kobalt.

The 5 Types of Snow Blowers

Single-stage electric snow blowers are suitable for snow layers that measure less than 6 inches in height. They are typically no bigger than a small-sized lawn mower. They are popular because they are lightweight and quiet, being amongst the models that are the easiest to use.

These products work with a plastic auger that pulls in snow and releases it through a chute in a single-step process. However, it’s not uncommon for this auger to also pull in gravel, which makes it rather tricky to use if there are other people around; pets can also get hurt in the process.

The electric motor means that you won’t have to invest in other consumable sources of fuel. The biggest downside here is that you will be limited to the length of the cord.

Single-stage battery-powered snow blowers are similar to the single-stage electric ones, but you can move around more freely as you’re not limited by an electrical cord. However, some people will argue that these model sacrifice performance in the favor of convenience.

Some models are efficient in helping you get rid of snow up to 9 inches in depth, but the majority of models pertaining to this category are typically better for simply sweeping away thinner layers of snow. They don’t have too much power to offer and they are recommended for using on decks and walkways.

Single-stage gas snow blowers are a viable choice for removing layers of snow of up to 9 inches from walkways and paved driveways. Because they are gas-powered, there is no cord that will limit your movement. On the downside, they are more expensive than other models.

Depending on the model you choose, your single-stage gas blower might even give you the option for an electric starting. The four-cycle motors that these pieces of equipment comes with are powered by gasoline alone and don’t require the use of oil. You might notice that on steep slopes, they tend to veer sideways.

Two-stage gas snow blowers are great for long and wide driveways with snow layers that can reach up to 16 inches. Depending on the model chosen, your snow blower might be able to handle steeper inclines and can create paths of up to 30 inches in width.

They function on the same auger mechanism that picks up the snow and throws it away, only these models come with a fan-like impeller that’s propelled by engine-driven wheels. These aid the auger in throwing snow out the chute. Since they are designed in such a way that the auger does not touch the ground, these types of snow blowers are perfect for removing snow off gravel. They are, however, quite expensive, and they can be quite difficult to maneuver and store.

Three-stage gas snow blowers are the most advanced and powerful models currently available on the market. They can remove layers of snow as deep as 18 inches. They are different due to their accelerator, a feature that speeds up the process of transporting the snow from the auger to the discharge impeller. They are also very efficient in clearing wide paths of snow of to 30 inches.

Even if they are truly powerful, these machine are also heavy and expensive, which means they aren’t meant to be maneuvered by anyone. Also keep in mind that they take up a lot of space, so you might want to invest in one only if you have enough space in the garage or the shed to store it.

How to Choose the Right Snow Blower

While your specific needs are certainly different from the next person, there are a few general things to keep in mind. We recommend keeping the following three purchasing considerations in mind when looking into different kinds of snow blowers.

Snow blowers function with an auger that draws snow inside and releases it back out through a chute. The stage of a snow blower is an indicator of how this entire system works.

For instance, a single-stage snow blower has a corkscrew-shaped auger that moves the snow all by itself. Two-stage snow blowers use both an auger and an impeller for the same task. In tandem, these are more efficient at collecting snow faster, but they also throw it away father.

Three-stage models include an impeller, an auger, but also another component which is called an accelerator. What this third component does is to make snow travel more efficiently between the auger and the impeller. These units are the most efficient ones at removing snow.

Corded Electric vs. Battery-Powered vs. Gas-Powered

The power source of your snow blower is also important because it helps determine how and for how long you can use it without interruptions. There are three possible options here: gasoline-powered, electrical-powered using an electrical cord, and battery-powered blowers.

Gasoline blowers are the most powerful, but they require fuel to operate. Electric models are decent, but you are limited to the length of the cord (and maybe an extension cord). Battery-powered units are less expensive and easy to move around as you please, but they sacrifice the ability to clear heavy snow.

The third most important thing that you need to look at is how the snow blower can be moved around. Here, there are two options: wheels and tracks. Most of the snow blowers that you will currently find on the market are constructed with wheels. They literally look like lawn mowers on wheel, as they can be pushed and pulled by whoever maneuvers them.

Two and three-stages blowers usually have wheels that are propelled by the motor, thus being more powerful and efficient in clearing up larger areas. There are a few models that have tracks instead of wheels (kind of like the tracks that you see on military tanks). While not that common, tracks can be really efficient when the machine has to move on rougher and steeper terrain, so it’s definitely an option worth considering if you’re not always going to use the snow blower on flat surfaces.

Time to get down to business and examine some of the best Kobalt snow blowers on the market.

This particular Kobalt snow blower is just what you need for narrower sidewalks and driveways. It is a battery-powered unit, which means that you are not conditioned by a power outlet to use it. However, it also means that there isn’t that much power for you to rely on, so it’s definitely not a viable choice for clearing up large areas at once. It can clear paths of 12 inches. The snow blower starts with a simple push of a button, which makes it pretty convenient. 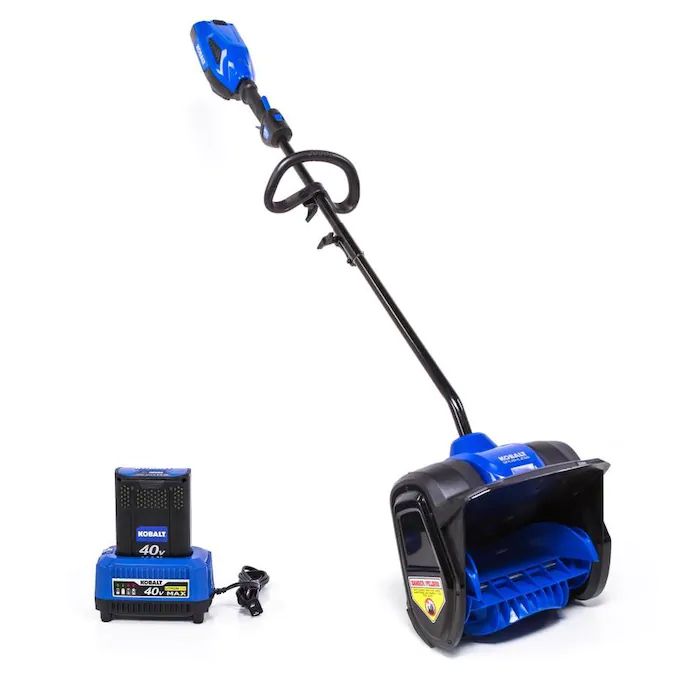 If you want to clear small paths and piles of snow without being limited by the length of a cord, then you will appreciate what this product has to offer.

This battery-powered snow blower comes with 22 inches clearing, which makes it pretty efficient even if you have wider paths or larger yards that you want to rid of thick layers of snow. The monitor lacks brushes, which gives it increased runtime performance.

The 8-inch rear wheel makes it real easy to maneuver this snow blower even in thick snow. There is a crossbar control panel that grants you control over battery life monitoring together with manual adjustment of the auger. The dual LEDs of this snow blower will come in handy while clearing snow in the dark. Other features of interest include 180-degree rotating chute, a two-speed auger, and a battery with a quick charger included.

If you’re looking to invest in a snow blower with a high-quality battery and sufficient torque to get snow out of your way, this Kobalt model is worth looking into.

Did you ever find yourself with a drained battery in the middle of removing snow? This model comes with two batteries included.

Much like other models, this one also comes with a brushless motor that’s faster and more efficient in removing snow. Furthermore, it includes a 180-degrees chute rotation, 7-inch wheels that are pretty responsive and make it easier to maneuver the snow blower, and 40V batteries which are compatible with any 40V tool. 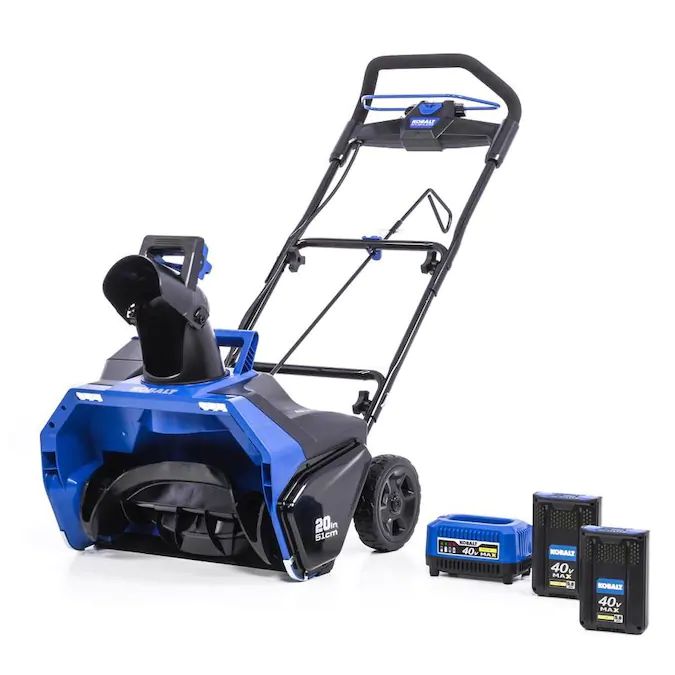 While it’s a good snow blower, this Kobalt model has proven to be most efficient when trying to remove thinner layers of snow.

When you have lots of snow to remove, it’s imperative to have a battery-powered unit that actually has sufficient juice to help you sweep out the entire area. This Kobalt snow blower is everything you can ask for as far as good battery snow blowers are concerned. This model has a 22-inch clearing width, so it can be pretty efficient for those of you with wider driveways. The two 5.0 batteries that it comes with should provide you with more than enough power to clean up even the largest yards and driveways.

The other specifications stay true to Kobalt’s brand promise: You get dual LED lights for more vision in the dark, a crossbar control panel for manual auger adjustment, a powerful brushless motor, and the 180-degrees rotating chute. 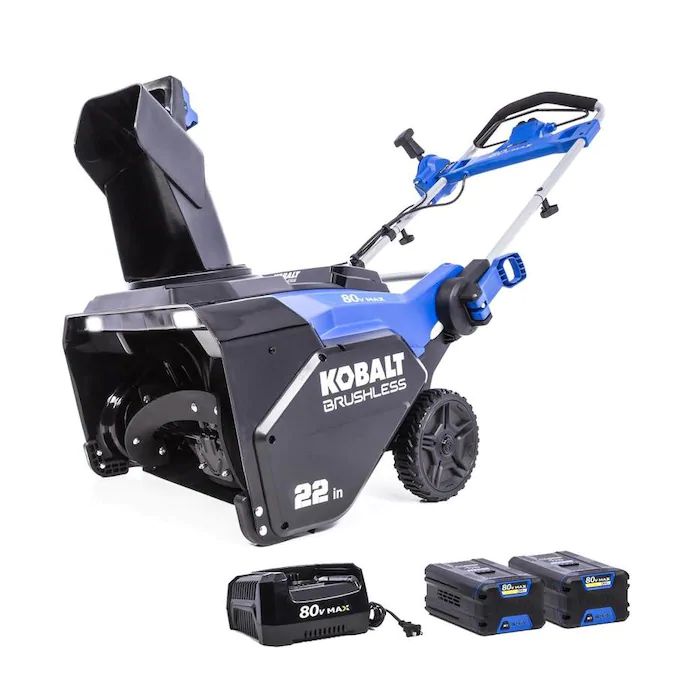 This particular Kobalt snow blower is great for those of you that want the cordless experience but often run out of battery. The package delivers the snow blower together with two batteries.

When it comes to tools, Kobalt may very well be a name that’s already stuck to your head. Their battery-powered snow blowers are items you’ll want to consider if you are tired of the limitations of a corded electric model, but don’t want to invest in a product that requires gasoline to function. With a Kobalt snow blower, you will gain access to a product that provides plenty of power for getting rid of snow of all kinds of depth, creating pathways around the house every time it’s needed.

Not sure, yet, whether Kobalt is the right choice? Have a look at our best snow blower reviews for a few more brands and models to pick from.

8shares
Scroll back to top
8shares