The Best 7 Summer Flowering Vines and Climbers - Backyard Boss Skip to content
We are reader supported. External links may earn us a commission. 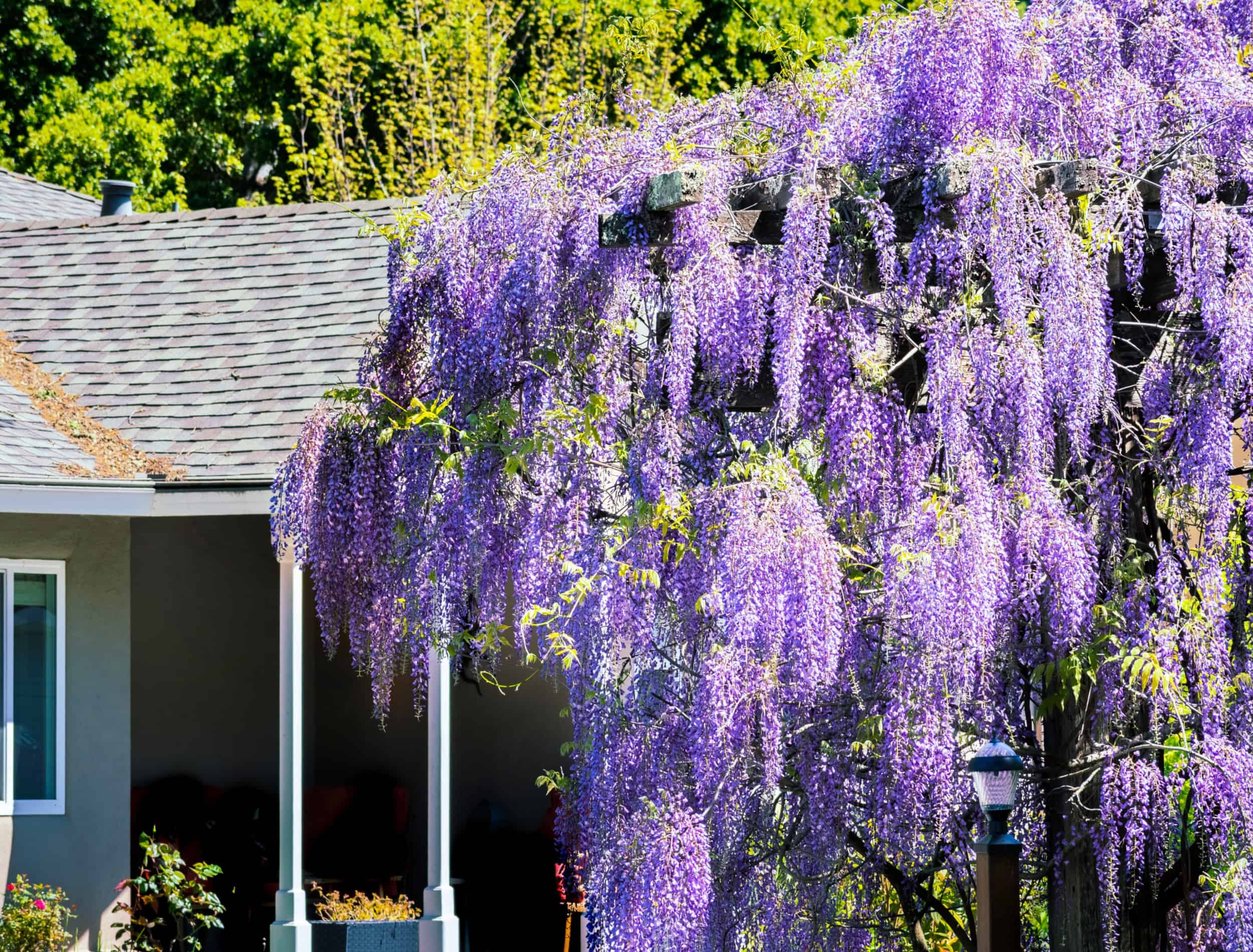 Flowering vines and climbers feature stunning blooms, which can add many benefits to your garden or landscape, including providing resources for garden wildlife and visual interest. What exactly are vines and climbers? To keep it simple, there are five main types of climbing plants: those that climb via hook, leaf, roots, tendrils, and those that twine. Some of these are vines.

These plants trail on the ground and climb up neighboring objects whenever possible. They can cover considerable space and maximize small spaces with their woody or evergreen trails. Following are seven flowering vines and climbers you’ll probably want trailing around in your garden.

These racemes are wine-red and emit a piquant chocolate fragrance in the spring. During a long summer, its flowers give way to violet-colored sausage-shaped seed pods measuring around 4 inches, which ripen in the fall. When split open, the fruit has black seeds and an edible white pulp that tastes similar to coconut. (To guarantee fruit, you may need to hand pollinate.)

This flowering climber provides decorous cover for fences, pergolas, walls, and arbors with its verdant, elliptic leaves. It can reach 40 feet at maturity.

Note: Chocolate vine is considered invasive in some US states, so please check local laws before planting.

Native to Brazil, the tropical purple allamanda (Allamanda blanchetii ) is a shrubby climber cherished for its rose-purple flowers. It thrives in fertile, moist, well-drained soil.

However, purple allamanda’s beauty comes with caution because the sap it produces is toxic to humans and animals, so wear protective gear before handling the plant.

Note: Purple allamanda is considered invasive in some US states, so please check local laws before planting.

American wisteria, also known as Wisteria frutescens, is a sweet-smelling, hardy climber with woody twining stems. It is native to the U.S. and grows less aggressively than Chinese and Japanese wisteria. You can grow American wisteria against walls, trellises, arbors, fences, and pergolas. In addition, this deciduous vine attracts butterflies and can grow up to 25 to 30 feet in ideal conditions.

This fast-growing climbing plant bears clusters of pea-like lilac, purple, blue, or white flowers, which measure 6 to 9 inches long and bloom in late spring or early summer. The flowers give way to seed pods in early fall, which spread seeds if left to ripen.

Pro Tip: If you cut off seed pods early enough, the wisteria will produce a second flush of flowers. It’s best to propagate this plant from cuttings because blooming from seed can take years.

Native to Mexico and some parts of Central America, coral vine (Antigonon leptopus) is a woody climber that looks beautiful in any garden! Its leathery leaves compliment its crimson flowers that bloom from late summer till early fall.

Coral vine flourishes in organic, moist, and well-draining soil in full sun or partial shade. In ideal conditions, this climber can reach heights of up to 50 feet!

Note: Coral vine is considered invasive in some US states, so please check local laws before planting.

Abilene is relatively petite and only reaches about 3 to 4 feet at maturity. This hardy climber is fast growing and blooms its first flush of flowers between late spring and early summer. Abilene flowers are star-shaped and pink, finished with a deeper shaded stripe marking each petal.

Although it is a sun-loving climber, abilene prefers to have its head in the sun while its roots stay shaded and cool in moist, well-drained soil.

Clematis Anna Louise is a beautiful flowering vine that grows to a height of 8 to 10 feet. It’s prized for its large blooms and free-flowering habit. It bears violet-blue flowers that open up dramatically into a star shape with cerise-colored stripes that shoot out from the flowers’ white stamens. Due to its free-flowering habit, Anna Louise tends to bloom early, especially while the plant is still young, so it has no defined bloom season and produces flowers over an extended period.

Generally, a mature plant will flower twice, first in late spring to early summer and again in late summer and early fall.

Luminous Clematis Asagasumi is a hardy climber ideal for trellises, arbors, and pergolas. Its white blossoms measure 6 inches across, and its lightly ruffled petals center around yellow seed heads that crown the flower.

The flowering climber can grow up to 10 feet in length and prefers partial shade as its snowy blossoms fade quickly in direct sunlight.

Its lavender-pink flowers feature petals striped with five white lines that beam out from its yellow or white center. These flowers bloom generously on succulent stems among glossy, kidney-shaped leaves whose trail spread can measure as long as 100 feet! This flowering vine primarily grows in beach sand and loves the full sun.

Note: Morning glory is an aggressive grower that can take over your garden and suffocate your other plants if left unchecked. Keep children and pets away from this plant, as the seeds may be toxic and hallucinogenic in large quantities.

Late Dutch honeysuckle’s dark green oval-shaped leaves contrast the bouquet of white, red, and purple-toned flowers that blossom forth. The vine flowers steadily from midsummer until early fall, and the sweet fragrance invites hummingbirds, bees, butterflies, and other beneficial insects to its outstretched stamen.

At the end of its flowering season, its two-lipped flowers give way to glistening berries, which are poisonous to humans but eaten by birds. This vine is deer resistant and drought tolerant and can grow up to 20 feet in ideal conditions. This flowering vine isn’t suitable for container gardening.

The beauty and intrigue of flowering vines and climbers prove that plants shouldn’t be confined to the ground or only situated on a set perimeter. Instead, these plants’ sprawling and trailing nature are a fascinating garden display.

Vines and climbers add a wow effect that shrubs and bushes can’t provide. Apart from adding texture and color, they provide privacy and attract pollinators to your garden. However, it can be challenging to pick the right vine for your garden, given the variety available today. Hopefully, this article helped you narrow down your search!

Xeriscaping: A Guide for Beginners

How To Create The Ideal Backyard Hummingbird Habitat

5 Reasons To Add Spider Plants To Your Houseplant Collection

Scroll back to top
56shares