The Best Tailgate Salt Spreaders for Trucks, ATVs, and More - Backyard Boss Skip to content
We are reader supported. External links may earn us a commission. 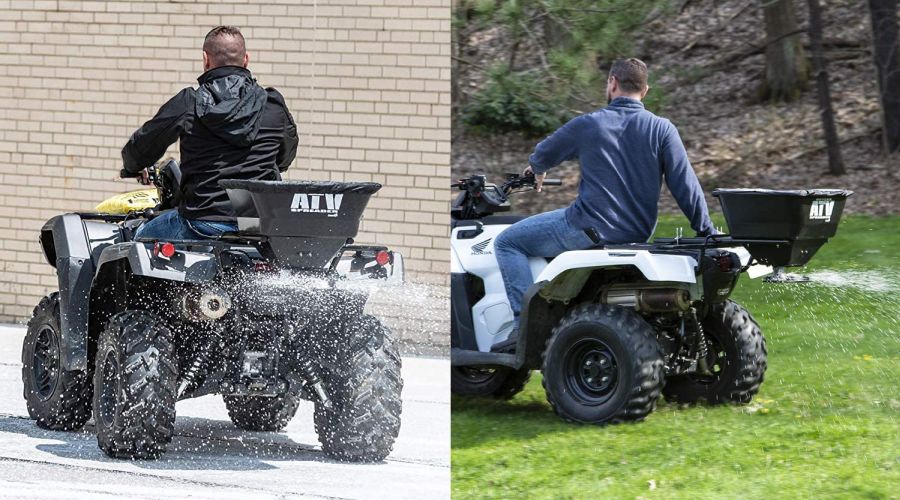 A salt spreader can help you control slippery driveways, sidewalks, and street during winter. But you can also use it to spread sand, seeds, or fertilizer while farming or landscaping during the summer. The tailgate salt spreaders we have compiled here are suitable for trucks, ATVs, or UTVs.

Why Do We Spread Salt in the Winter?

Salting has its limitations. For example, if you spread salt on an icy surface with a temperature lower than 15 degrees Fahrenheit, the frozen surface will not absorb salt, making it ineffective. A brine made from water and salt can temporarily increase the temperature to melt the ice, which allows the salty water mixture to penetrate the icy surface and break it up. Even with these limitations, rock salt is still one of the most efficient alternatives to chemical de-icing solutions.

How Does a Tailgate Salt Spreader Work?

A tailgate salt spreader is a device that’s mounted on the back of a vehicle. You fill the hopper with salt or a similar material, for example sand or fertilizer. You can control the spreader from inside your vehicle. The spinner and the auger usually have customizable settings so that the driver can regulate the amount of salt being spread each mile.

The auger will then pull the salt from inside the hopper and transport it to a discharge chute. Another component comes into play here: the spinner disk. This disk acts like a spinning spray head that helps distribute the salt over a wider portion of the road.

A tailgate salt spreader is best used on the road when it’s time to de-ice it. This is the stage when ice and snow have bonded with the surface of the road. Note that the salt doesn’t actually melt the ice, but rather prevents it from adhering to the pavement. As a general rule, you want to plow the snow and break the ice before you start spreading salt. It is also a good idea to use a tailgate salt spreader during a snowstorm because it makes it easier to remove both ice and snow from the roads later on.

What’s an Under Tailgate Salt Spreader?

The under tailgate salt spreader is most suitable for large trucks. It also mounts to the back side, but it lacks a hopper and thus occupies less space and can sit lower. It is still powered by an auger and works on the same principles as the other types of spreaders. The main difference is that it draws salt from an external reservoir, which usually sits on the truck’s loading bed.

What Are the Benefits of a Tailgate Spreader?

With all this newly-acquired knowledge, it’s time to take you shopping. Below are our top 5 picks for tailgate salt spreaders and all the shopping information you need in one place.

This tailgate salt spreader has the torque to back up the price. It is constructed with a carbon steel frame with a powder coating that prevents corrosion from ever becoming a problem.

The hopper has a capacity of holding up to 331 pounds of salt with a 4.4 cubic foot storage area. There is an auxiliary plug that comes with it and you can operate the spreader through the manual switch controls. Other features of interest include a 9-inch spinner that can spread salt at a range of maximum 14 feet and a simple gravity feed system that ensure a constant flow of material. 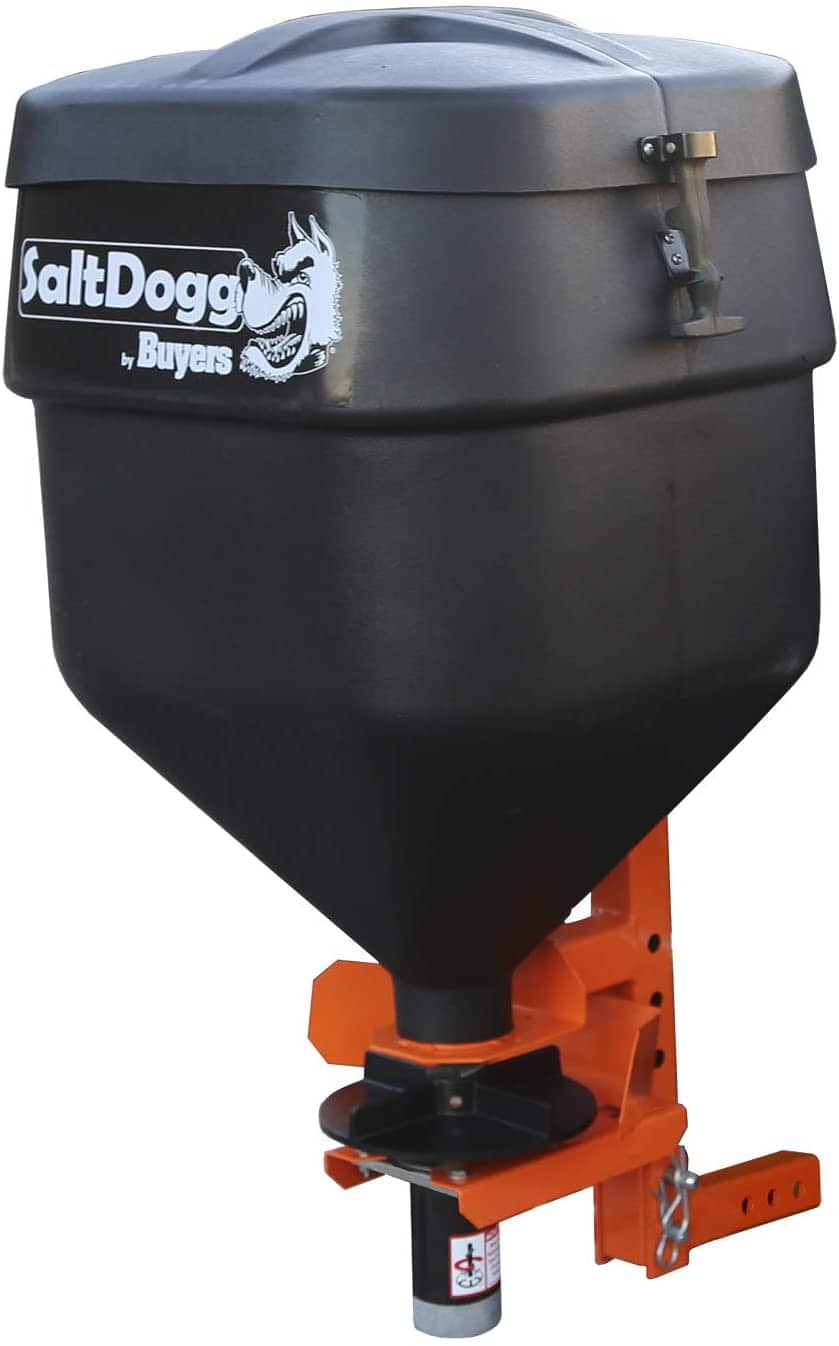 In terms of good and durable tailgate salt spreaders, this SaltDogg gem is one of the best products that money can buy.

The Agri-Fab store has another little gem in store for you, only this time it’s a towed salt spreader and probably one of the most cost-effective products in its category. It comes with a durable rod linked on-off control that’s pretty easy to maneuver, 13″ x 4″ pneumatic tires, an enclosed gear box, heat-treated metal bevel gears, and the ability to spread salt at a maximum length of 12 feet.

The hopper can fit up to 130 pound of salt. Even if the capacity of the hopper seems pretty low, the manufacturer promises that it can cover up to 25,000 square feet with a single fill. 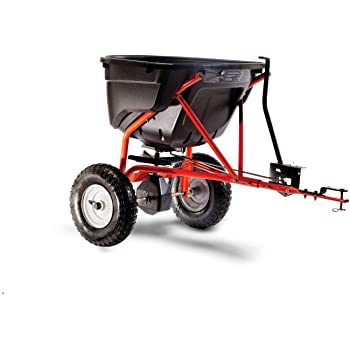 Those of you that are on a budget and can use a smaller tailgate salt spreader to cover their needs should check out this nifty machine from Agri-Fab.

This is one of our favorite tailgate salt spreaders not just because it’s affordable and comes with a sturdy construction, but also because it has so many different applications other than spreading salt in the winter. It can spread everything from salt, fertilizer, and feed, to other types of seeds and materials, depending on what exactly it is that you need.

It has a rust-proof construction and it’s designed with a strong poly hopper that can hold up to 15 gallons of whatever you choose to put inside it. There is a two-inch receiver hitch to attach the spreader, plus a 12V sealed motor to go along with the rest of the amazing construction. 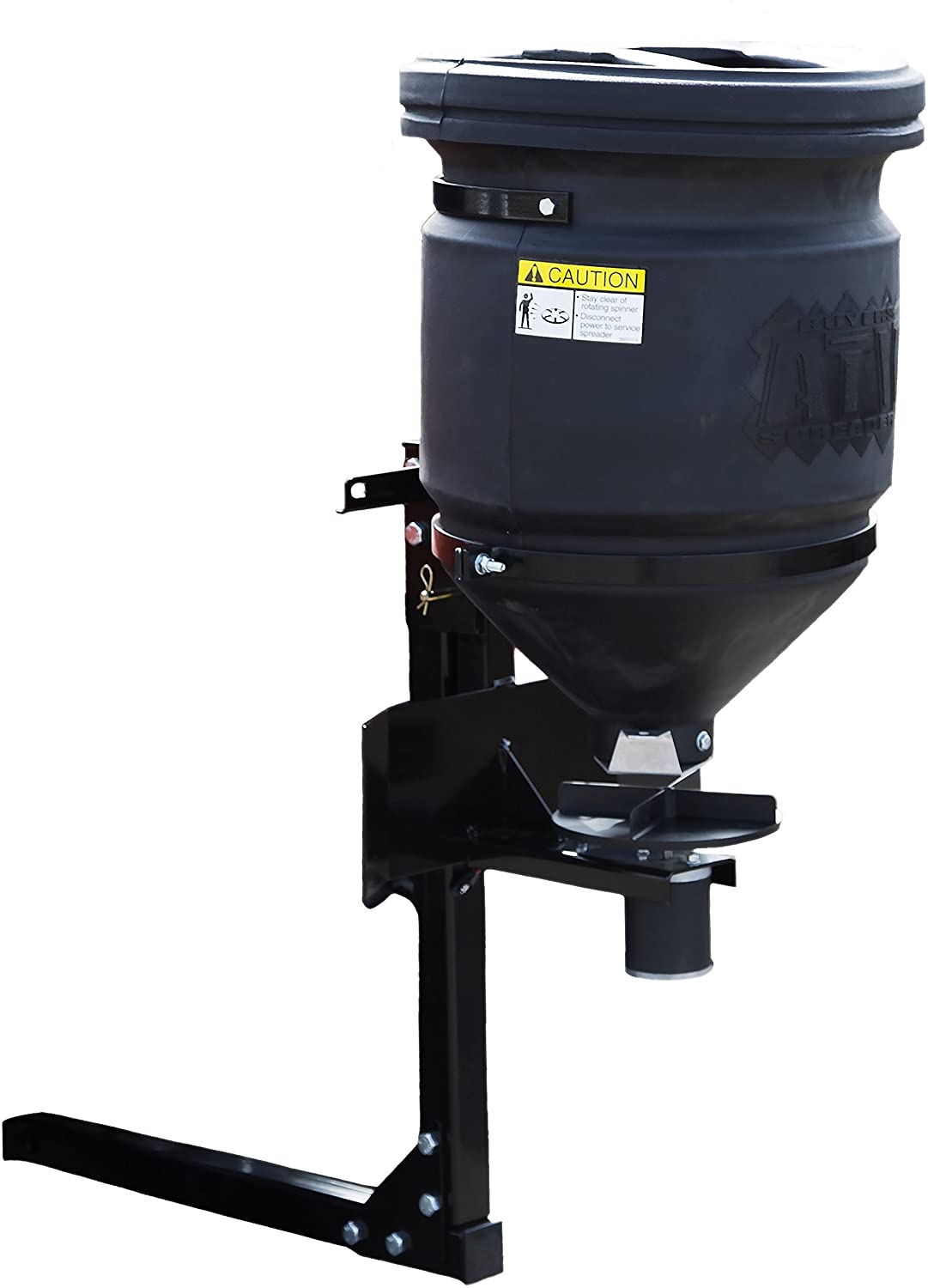 If you’re hoping to invest in a tailgate salt spreader which actually has a lot of other different application (and can turn out to be really useful in large gardens or farms), then you’re surely like this Buyers Products hidden gem.

Advertised as being useful for commercial applications, we believe this product is also suitable for personal use, depending on your needs. It is designed with a poly hopper that can hold up to 8 cubic feet of material.

The frameless hopper comes with double-wall construction and promises to withstand corrosion regardless of the outside weather conditions. This tailgate salt spreader can be mounted to a 2-inch hitch that comes with vertical and horizontal adjustment. The poly spinner has a maximum length reach of 30 feet. 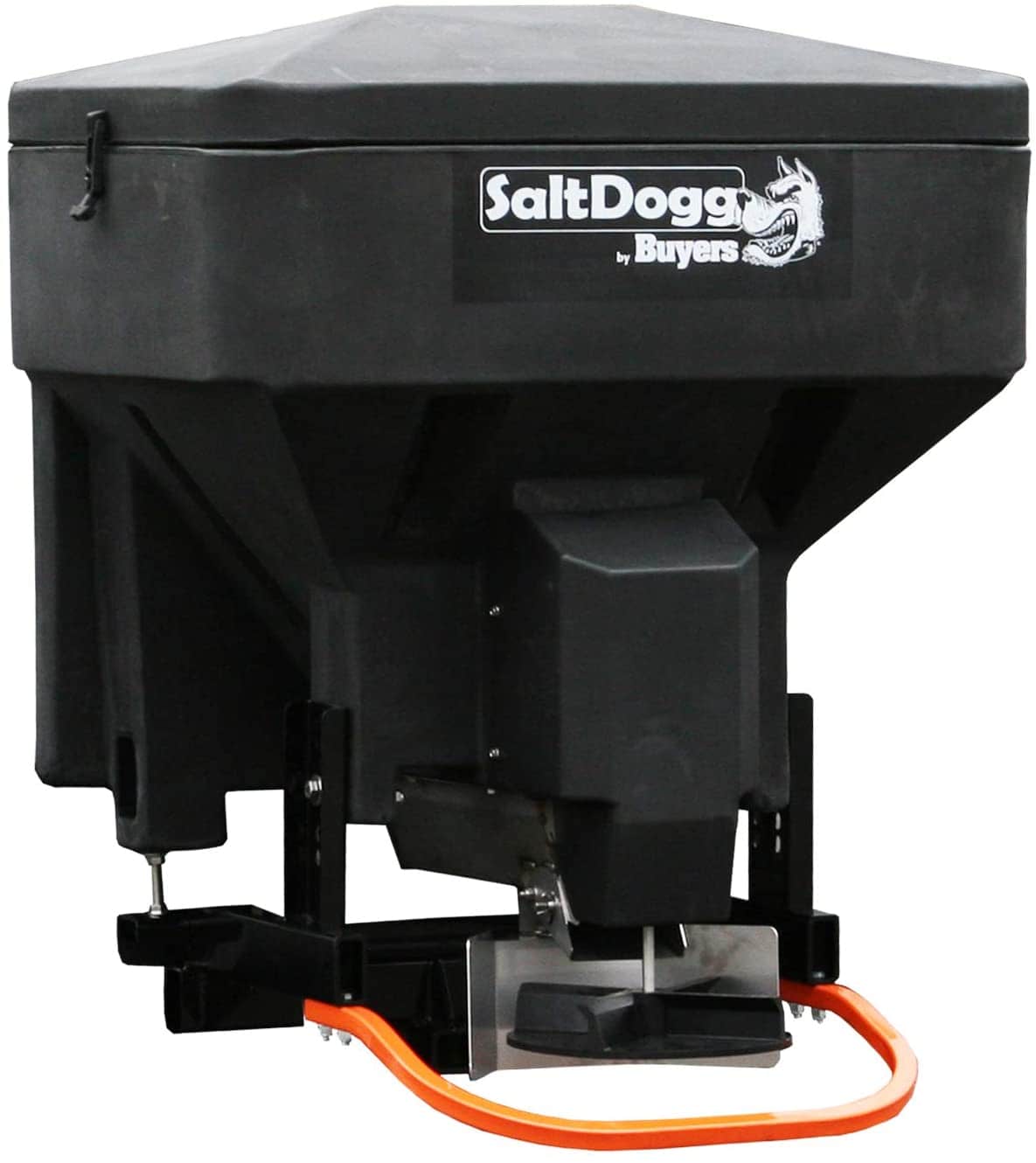 The SaltDogg TGS03 is a bit of a powerhouse if you compare it to the other products we’ve shown you so far, and it might indeed be more suitable for those of you interested in the commercial application of a spreader that can throw snow at a 30-feet distance.

This spreader comes with a poly hopper that has a total capacity of 100 pounds, be they salt, seeds, or sand. The 12V motor is concealed inside the hopper, so it will stay protected at all times. The hopper also comes with a cover, which is an underestimated feature that keeps unwanted debris outside.

The Buyers Products ATVS100 spreader also comes with a manual feed gate regulator that grants you more control over the quality of salt being released. It measures 25 x 22 x 18 inches, which makes it quite a low-profile tailgate salt spreader. 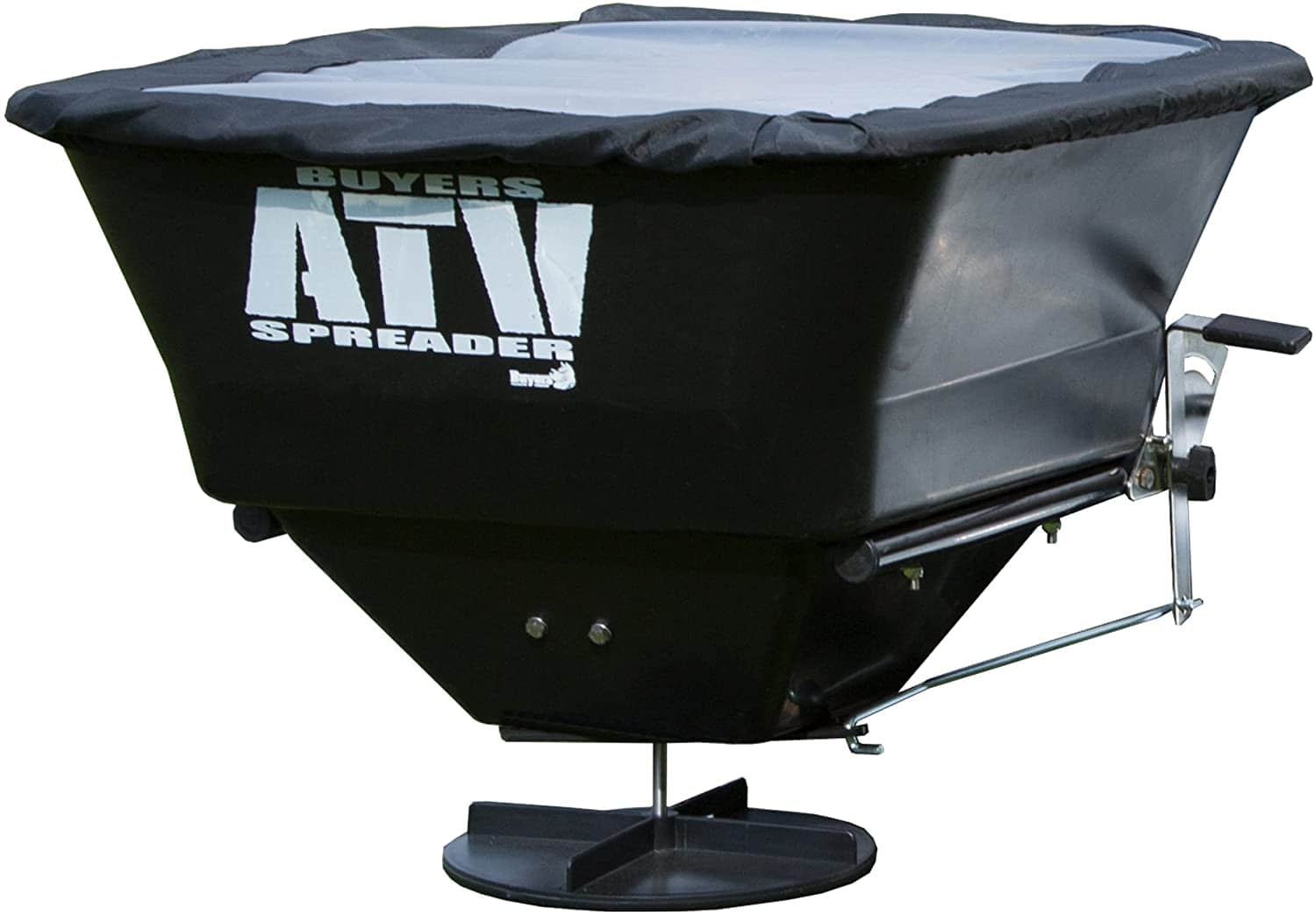 If you own an ATV and would like a suitable tailgate salt spreader to go along (and also one that doesn’t break the bank), take a look at what the Buyers Products ATVS100 spreader has to offer.

Before you invest in one of these tools, be sure you understand how it’s mounted, whether it comes with its own hopper, how much material the hopper can hold and which area that will cover, and what kind of material you can spread. If you want to use your tailgate spreader year-round, look for one that can handle materials other than salt.

Remember to use your tailgate salt spreader before it starts snowing or while the ice temperature is still above the critical limit. Also, turn off that auger when it’s not in use, and calibrate your equipment before using it.

If you’ve come to think that a tailgate salt spreader is more than what you need, have a look at these walk-behind salt spreaders instead. And while you’re here, do you have a tool to remove snow from your roof, yet?