The Best Yard Games for Adults - Backyard Boss Skip to content
We are reader supported. External links may earn us a commission.

Did you know that kids who spend more time outside grow up to be happier adults? Did you also know that adults spend much less time outside than the daily recommended amount for their well-being? There are plenty of scientific facts that back up the idea that both children and adults should get out of the house more often and spend some time in the sun. We’re going to go over some of those benefits of being outdoors, but not without adding a list of games that might actually get grown-ups to spend more time in the yard.

Leaving the house and spending more time under the sky is beneficial for both the mind and the body, according to numerous studies in some extremely surprising ways. As it turns out:

If we’ve convinced you that leaving the house to spend some time outside is worth it on so many levels, let’s explore some of the yard games that you can play with your friends and family, even in this new world of social isolation.

Don’t let the pictures fool you that this is some complex sport. If you’ve ever played cornhole, you will master the BULZiBUCKET game in no time. It’s a simple game, potentially more fun with modest inebriation, where you throw a ball in a very small bowl. The team (or person) with the best aim gets the most points. It’s a well-designed product; the targets can be collapsed and occupy less space when you need to store/carry the game around. The set also contains six balls, three for each team.

It takes less than 20 second to set up and take down the game (and 15 seconds to go over the rules). That makes this game the perfect thing to have around the garage or pool when you’re just looking to get going quickly. 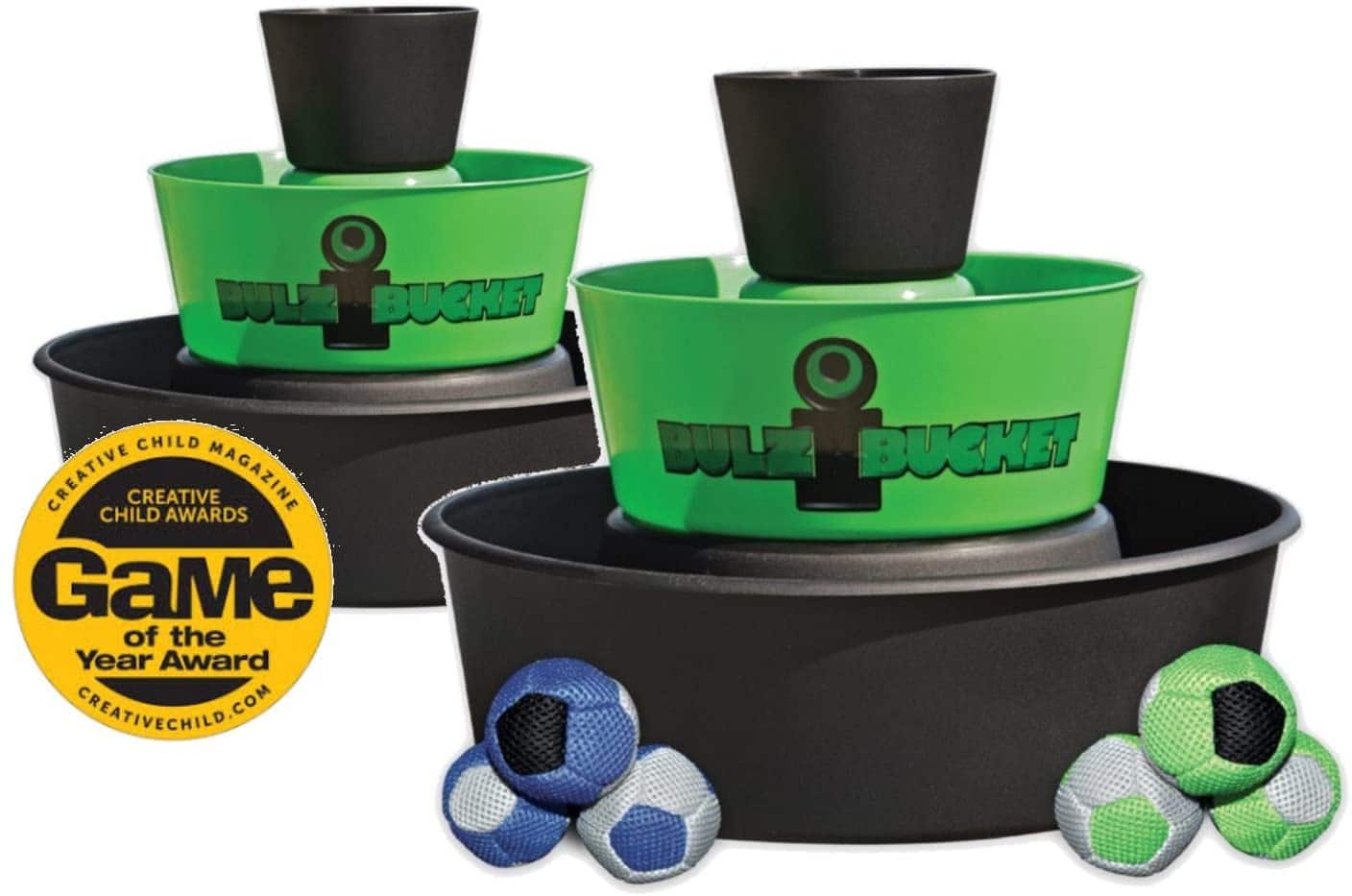 If you’re looking for that game that’s super easy to set up, where everyone can learn the rules quickly, and is portable enough to be taken on outdoor excursions, this is the right product for you. 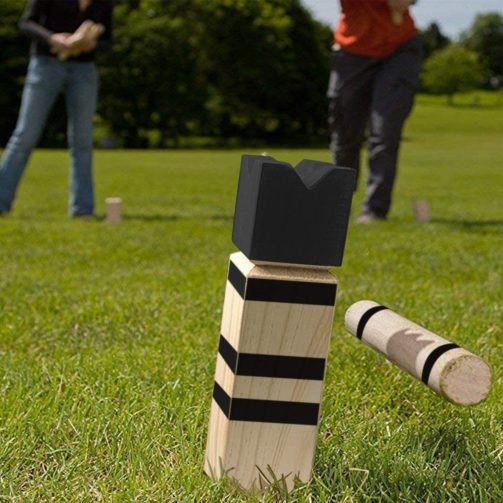 This Kubb game may not be one everyone is familiar with, so let’s go over the rules real quick: Two teams face each other and try to throw batons across the field in an attempt to knock down as many Kubb blocks as possible. Every knocked down Kubb will be claimed by the team who did it and can be used to defend the other blocks. The ultimate goal of the game is to knock down the King (the largest block in the game), whilst following the correct order for knocking down the other blocks first.

The game itself is designed with pretty heavy blocks that aren’t easily knocked over by the wind, but they are just as difficult to knock over using the batons provided in the set. It’s a very competitive game that can be played even in large groups of 12 people (six on each team). 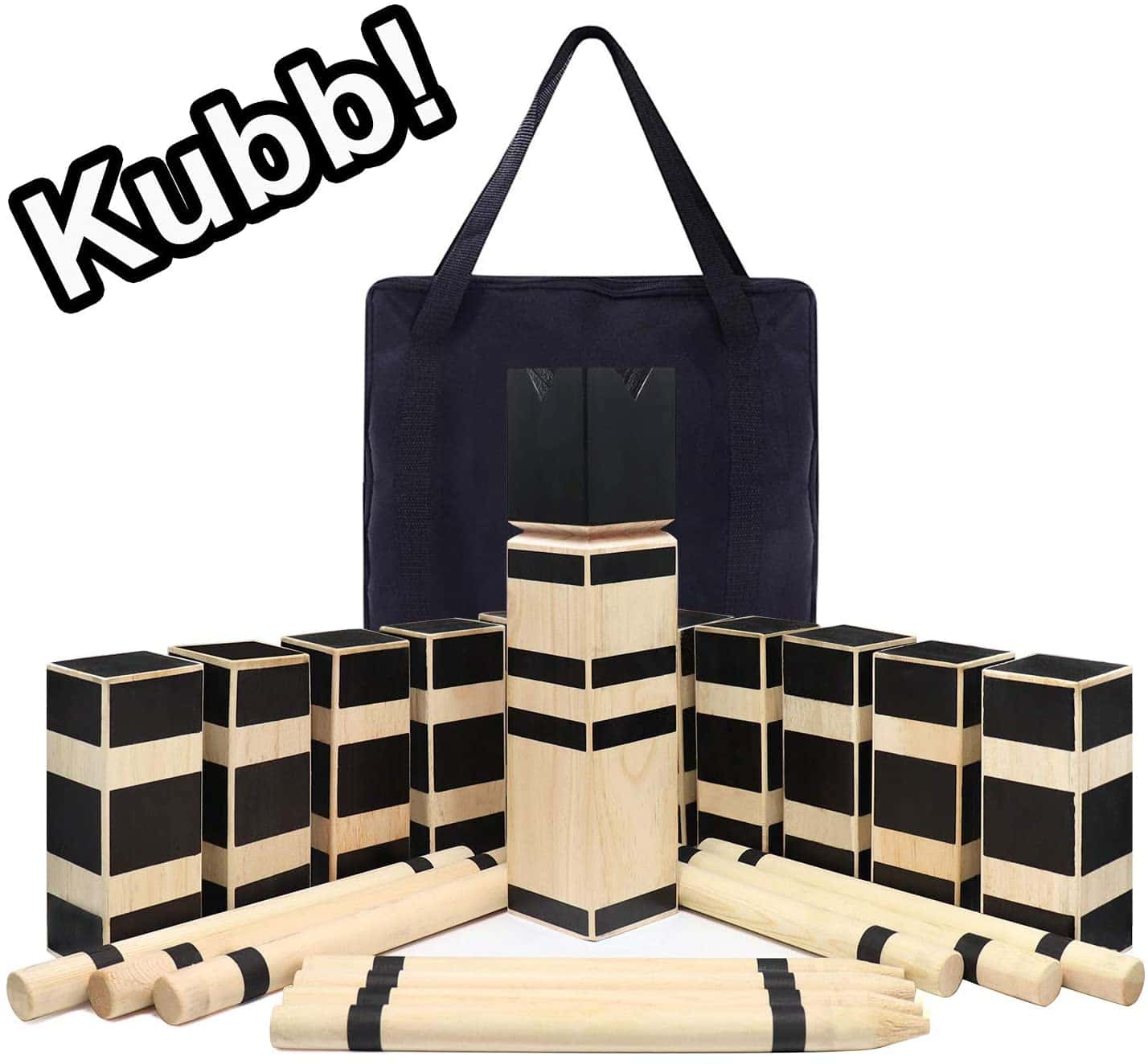 If you’re having a barbecue get-together and would like a game that can be played in a larger group of people, this Kubb blocks challenge might be the ideal choice.

Pickleball is like mini-tennis on steroids, basically a combination between tennis and Ping-Pong, with a few twists and adapted rules. It’s extremely fun, and usually requires a court. We also use the balls and paddles in the yard– hitting back and forth for practice.

While it can also be played in a player vs. player scenario, Pickleball is more fun when you have a teammate. This set is the perfect purchase for adults who want to learn how to play the game, as it comes at a good price and decent construction to withstand drops and heavy ball hitting.

Each set includes four paddles, four balls, and a mesh carrying bag which is good for storage. The paddles are each made from 7-ply wood maple construction and have a comfortable grip that makes them super easy to hold and maneuver. The handles also come with a wrist strap, so even as you’re learning how to play, you won’t throw away the paddle in the process. 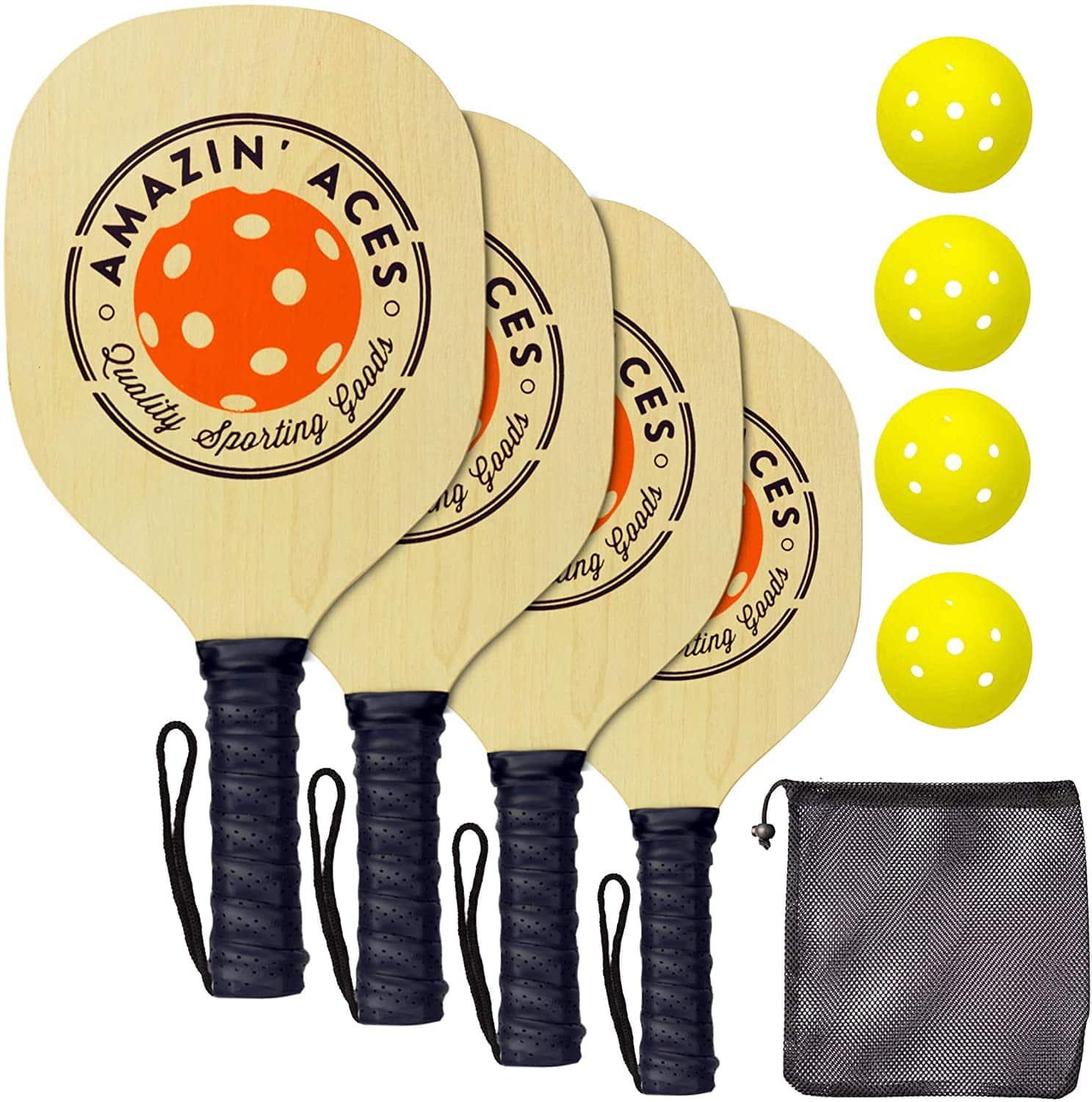 If you’re in a smaller group of adults (2 to 4) and are looking to get exercise while working on that hand-eye coordination, this Pickleball set will prove worthy of your money.

Tug of war is a game that most adults are familiar; we used to play it in camp when I was a kid. (Now maybe they are scared of someone getting hurt!) It was used to determine strength on the playground and all you really needed to play it was a sturdy piece of rope. The game requires two teams of supposedly balanced strength to pull the opposite ends of the rope until one of the teams is eventually pulled over the centerline.

This 33-foot long rope is designed to prevent blisters and to be sturdy enough to resist pulling no matter how strong the adults playing. The rope is delivered with a very convenient carrying and storage case, which makes it easy to pack up and take camping, on picnics, or wherever your headed in the great outdoors. The rope is made from polyester 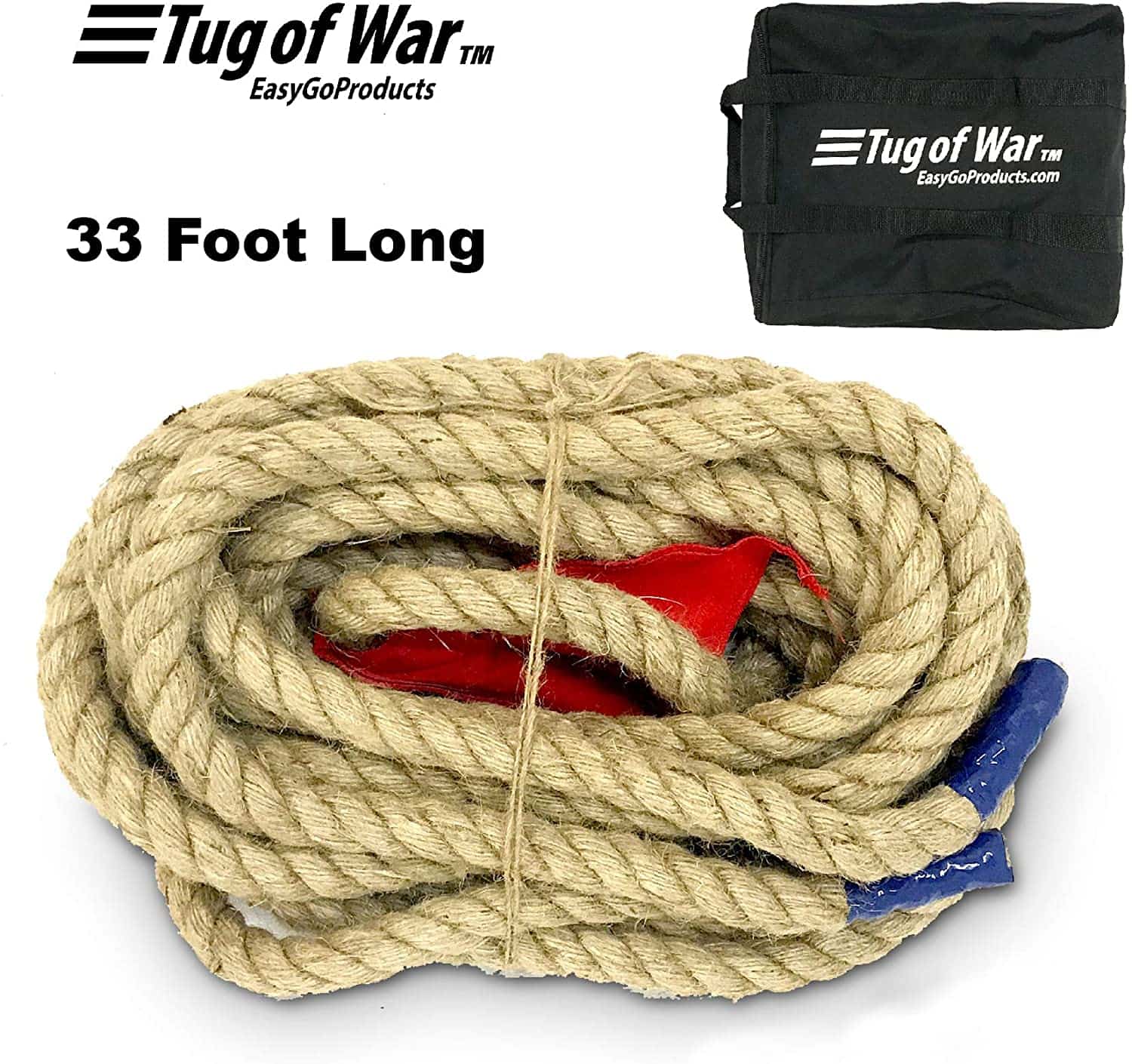 This tug of war rope is the perfect addition to a family of meatheads who want to prove they are the strongest! My husband loves it.

If you’re a fan of croquet (the good kind, not the Alice in Wonderland kind), then you must own a croquet set for hours and hours of fun when adults get together for some serious grown-up games. This set comes with 6 wooden mallets, each with a unique color so you can pick your favorite. I only use yellow.

The set also comes with six molded balls in colors that match the mallets, so each player can correctly identify the ball they need to hit. The included nine steel-bent wire wickets are easy to stick into the ground, remove whenever the game is over, and clean to be ready to use for the next game. 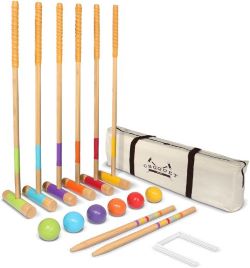 This croquet set is perfect for adult groups that want to try a fancier sport that provides more time outside without having to actually move around too much.

Regardless of your age, spending time outdoors is important. Even in times like these, getting some vitamin D and breathing fresh air can actually help fight off some of the anxiety we’re all feeling. Those of us who are lucky enough to have a yard should take advantage of this to the maximum and maybe games like the ones we’ve just talked about will encourage more adults to spend as much time outside as possible.

12shares
Scroll back to top
12shares