Can You Have a Living Moss Wall? - Backyard Boss Skip to content
We are reader supported. External links may earn us a commission. 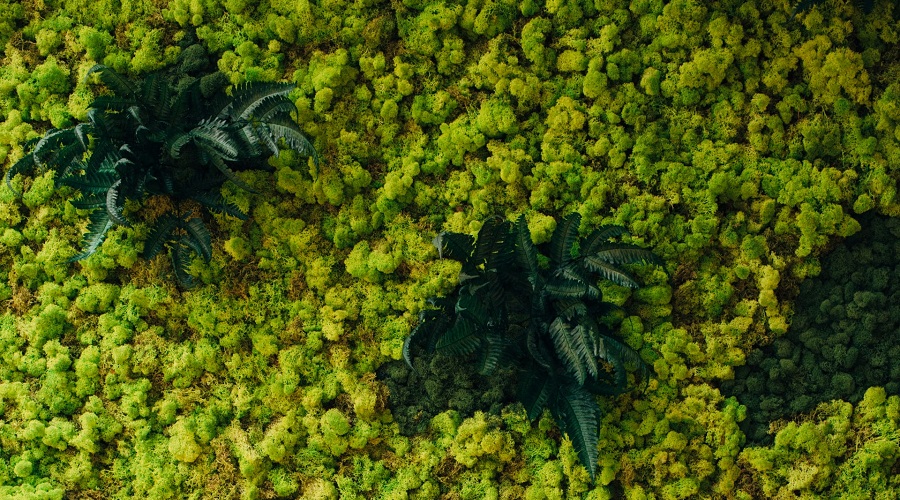 Most of you may be wondering if the moss wall that we usually see on Pinterest and Instagram as a backdrop is living or just a preserved version. We’re here to tell you that some are indeed living moss walls whereas others are preserved moss walls!

If you’ve been desiring that trendy, visually appealing ‘Instagrammable’ look, and are ready to invite nature home by adding a living moss wall design to your space, then keep on reading for our tips and a DIY guide.

If your idea of the perfect wall is one covered with living moss, we’d recommend that you have a living moss wall in your outdoor space. While there’s nothing wrong with having a portable moss compartment indoors, having a large living moss wall indoors can be a challenge to maintain.

This is because much like any living plant, living moss needs to be misted often, watered at least twice a week and humidity levels need to be maintained for it to thrive. Having said that, there are a number of moss varieties out there to help you create that stunning moss wall.

Indoor and outdoor moss walls come with their own set of benefits, which include:

It’s great to be able to have a living moss wall panel indoors, but the only challenge you face is meeting its humidity and watering needs without damaging your indoor walls. The perfect option would be to install preserved moss walls indoors and living moss walls outdoors.

Preserved moss is 100 percent moss that undergoes a preservation method to keep its texture, color, and quality intact. A preserved moss wall feels and looks exactly like a living moss wall, but instead of water and humidity, it requires occasional dusting. There’s no need to fertilize a preserved moss wall, and it doesn’t require sunlight, misting, or even trimming.

Just hang them up the way you want and enjoy. However, preserved moss is mostly used for decor purposes only and doesn’t come with the many benefits a living moss provides.

How to Create a DIY Moss Wall

1. Choose the Type of Moss That you Want: Living or Preserved

Before you start creating a DIY moss wall, know that living moss walls can damage the walls they are displayed on as they require constant moisture. So, we suggest that you hang a living moss wall in an outdoor space or indoors where you won’t mind the damage. A preserved moss wall may be placed indoors. It is easier to create preserved moss walls and since they don’t require water, you won’t run the risk of damaging your walls.

2. Choose or Create a Frame

Once you’ve decided on the type of moss you’re going to create, it’s time to get a frame. For a preserved moss wall, you can attach plywood to the backside of any frame. For a living moss wall, it’s best to get a soil-less garden wall kit.

Here are some moss types you need to keep in mind when making your own moss wall:

There are many living moss types for you to experiment with if you plan on installing a moss wall outdoors. Choose the right one for you based on the amount of shade or natural light it requires to thrive.

Putting things together is where the fun begins. Working with preserved moss is really simple. Just use a staple gun or wood glue to attach the plywood to the frame. Use your creativity and imagination about how you want the moss to transform. Mix and match your own piece of art, combine different details, characters, and colors together to create a piece that’ll turn heads. Use hot glue on dried accessories and preserved moss. Living moss walls are a bit complicated to put together. You need to plant them first in the medium or soil-less kit lying flat on the ground and then hang the piece once the moss has already thrived.

The difference between a living moss wall and a preserved moss wall is that the latter is very easy to maintain. Preserved moss is dry and so you don’t have to water it at all. You just need to add new pieces of moss if any of them fall off to keep your moss wall lush. For any living plants such as air plants or succulents that you have incorporated in a moss wall, you’ll need to lightly spray them with water to prevent them from drying or dying. With regular maintenance, living moss walls can thrive for years, as long as they receive the right amount of water, humidity, and sunlight. In general, moss prefers shade, moisture, and acidic soil.

Can You Have a Living Moss Wall?

Other than that, if you plan to have living moss walls indoors, ensure that there’s a sturdy barrier between the base of the moss container and the wall to prevent water from seeping into the wall and starting a rot. A damaged wall can be a nightmare to deal with due to the cost it takes to be repaired! Finally, it’s always best to have moss walls near a window that receives natural light to boost their growth.

10 Tips for Backyard Designs for Entertaining