How to Care for Your Aloe Plant - Backyard Boss Skip to content
We are reader supported. External links may earn us a commission. 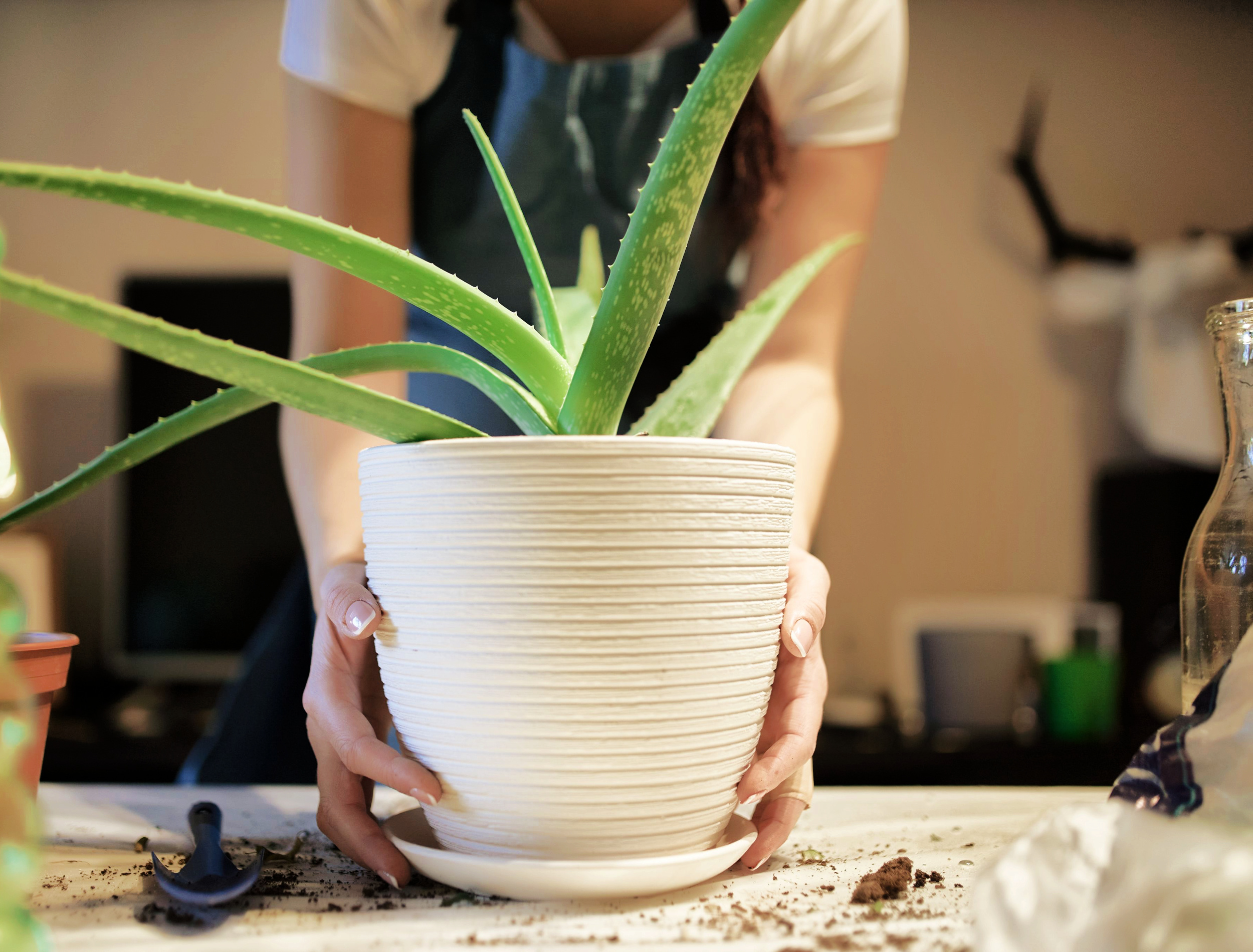 It’s no wonder aloe plants have become fast favorites with gardeners. These succulents from the tropics are easy to grow, have sumptuous, fleshy leaves filled with soothing gel, help purify the air, and keep water costs low. While there are more than 500 species of this herbaceous perennial, the most popular kind grown in homes is Aloe barbadensis, more commonly known as aloe vera.

In zones 8 to 11, aloe is in its element outdoors all year long. In cooler climes, most do best as houseplants, but they can still enjoy warmer months outside before wintering indoors. With a bit of TLC, your aloe plant will keep you company for 10 years or more.

Growing and caring for aloe is easy. If you’re already a home gardener, you likely have most of the materials you’ll need.

Aloe is a plant that can grow indoors or out. The growing requirements and care in each location are slightly different, so this guide outlines both.

Here’s what you need to do to plant your aloe indoors:

Step 1: Choose a breathable pot that has drainage holes. It should be about five to 10 percent bigger than your plant and as wide as it is deep.

Step 2: Add a well-draining potting mix. Aloe is hardy even in the poorest soils as long as they have good drainage. However, no drainage boosters like pebbles or stones are needed.

Step 3: Wear some gloves if you have a skin condition, such as dermatitis or eczema. Remove the plant from the container. Gently shake off any excess soil. Or, have your aloe pup at the ready.

Step 4: Use a garden shovel or trowel to fill about ⅓ of the pot with soil. Place your aloe plant or pup in the breathable pot and top up with soil just below the rim. Make sure the bottom leaves of the plant are not covered with soil. Gently pat the soil down.

Step 5: Do not water aloe after potting. Place it in a spot in your home that gets at least six hours of either bright direct light or bright indirect light. Watch for signs of overheating — such as the browning of leaves — and move it to a spot with afternoon shade.

Ongoing Care for Your Indoor Aloe

After about seven days, water the aloe plant deeply and ensure water drains into the saucer. Soil should be dry to about the depth of your index finger before the next watering. Generally, you should water it every two to three weeks in spring and summer but rarely in fall and winter.

Aloe plants seldom need fertilizing, but you can treat them to a succulent fertilizer once every four to six months.

To move an aloe plant outdoors when temperatures rise, place it in a spot with partial shade for about a week before moving it to a sunnier area. If overnight temperatures fall below 55 degrees Fahrenheit, bring your aloe plant indoors.

When aloe develops offspring or pups, it’s time to divide them. Gently uproot the plant to see where the pup is attached. Use a sharp knife to separate it. Leave a bit of stem attached to the pup. Replace the mother plant and cover it with soil.

Keep the pup in indirect light for about a week, so it develops a callous. Then, plant and care for the pup by following the above steps. Repot this succulent when it’s bursting out of its pot, has become leggy, or has too many pups.

Pro Tip: It can take several years for an aloe to flower. While this perennial’s natural habitat is hot, it is occasional exposure to cooler temperatures that helps it to bloom.

Care for Your Aloe Plant Outdoors

To grow an aloe plant outdoors permanently, temperatures should be ideally above 55 degrees Fahrenheit year-round.

Step 1: Find a spot in your garden with well-drained loamy, or sandy soil. Use a pH meter to ensure the soil isn’t too acidic or too alkaline; around the neutral mark is best. The location should also get between four and six hours of bright sun daily with some shade.

Step 2: Use a trowel or hand shovel to dig a hole approximately the same size as the pot holding your aloe plant. Situate plants about 2 to 3 feet apart.

Step 3: Gently shake or brush away any loose soil on the plant or pup. Place it into the hole and cover it with soil. Make sure no leaves are covered with the soil. Gently pat the soil into place.

Step 4: Do not water right away unless it’s very dry out.

Ongoing Care for Your Outdoor Aloe

Wait about a week to water your plant deeply, then water every two to three weeks. If it rains or there is drought, adjust your watering schedule. Generally, aloe plants do not need fertilizer. But in the early stages, you can promote growth by applying a 1-1-1 NPK fertilizer every six months.

If you notice that your aloe plant’s leaves are beginning to turn brown, pink, or red, it’s getting too much sun. Put a shade cloth or plant shade umbrella over it until temperatures cool. If a short-term frost warning is in effect, cover the plant with a tarp or plastic cover. When chillier weather persists, add a thick layer of mulch and cover the plant with a cloth.

After several years, you will notice that your aloe plant develops pups, so it will be time to divide it. Plant pups indoors or outdoors following the above steps.

Pro Tip: If you live in a cooler zone but crave having an aloe plant outdoors for most or all of the year, grow varieties such as aristata, ferox, or blue elf.

Watch for pests like aphids or aloe gall mites. Spray plants with water and apply neem oil to get rid of aphids. Gall mites cause “aloe cancer,” leaving unsightly tumors on the plant. Remove the infected plant immediately, bag it, and put it in the trash. Spray other aloe plants with neem oil. Monitor closely for any more infestations.

It’s hard not to notice a beautiful aloe plant in your midst. Using the tips here, you’ll be able to show them off at their best. They’re adaptable and enduring and can even recover from a bit of neglect. There’s nothing like being able to slice off a piece of a leaf and treating your skin to its cooling, healing gel.

Have your own must-know aloe care tip? Share it with others in the comments.

How To Prune Apple Trees In Winter

How To Repot a Cactus Plant

How To Create a Mini Indoor Greenhouse

Scroll back to top
10shares