8 Of The Coolest Bonsai Trees Around The World - Backyard Boss Skip to content
We are reader supported. External links may earn us a commission. 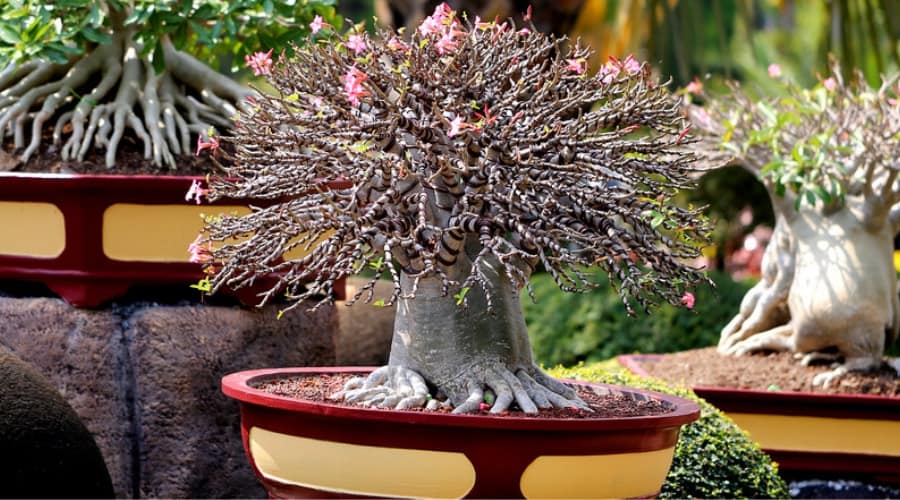 There’s a reason why so many people buy and maintain bonsai trees. There is a very Zen experience when caring for a living plant, but when it comes to bonsai trees, you can shape them and trim them into really intricate and beautiful shapes. Some of the oldest and most impressive bonsai trees have been collected in Asia to be kept in historical museums.

So, there is a reason why bonsais are so popular and continue to be one of the better methods of relaxation. Whether you’re a novice when it comes to caring for a bonsai or you’ve been practicing the art for a while, there is a lot of stuff to learn before you can begin the process of bonsai care. Let’s go over all the reasons why bonsais are some of the coolest plants around.

Inside the mystical realm of the Shunkaen Bonsai Garden in Japan, you will find some of the coolest, most interesting bonsai trees that are world famous. These trees have gone as far back 800 years ago when monks were carefully pruning each tree by hand. The practice of meditation and bonsai care started there, after all, in ancient Asia. Inside this ancient nursery, you will find so many bonsai trees that have their very own history’s. The garden is open for visitation and you can find a lot more information on the website.

Perhaps one of the most recognized, and most expensive bonsai trees in the world (if it were ever to have a price) is the Goshin bonsai. It was moved from Japan to settle into the United States so that many people could go and visit this wonderful tree. The tree itself is considered a “forest spirit” and its legacy lives on as impressive as this tree, itself. Read Goshin’s full story here. There is an impressive photo history of the Goshin tree, as well as plenty of handwritten letters from the artist who cared for Goshin throughout the 50s and 60s. The tree is said to have a warm welcoming presence on its visitors and is rumored to bring a sense of peace and calm to all who have the privilege to view it no matter how different they are from one another.

There are so many types of bonsais from fruiting trees to small shrubs. You can’t go wrong with any of these amazing little plants, but you may have a certain preference when it comes to the aesthetic of a bonsai. A few examples of bonsais are as follows:

Look into these bonsai tree designs if you want a truly magnificent and eye-catching experience. These are also the most sought-after trees since they are both aesthetically beautiful and produce interesting foliage or flowers. Keep in mind that these are a bit trickier to care for, so make sure you read up on your cool bonsai tree before you delve into keeping one. 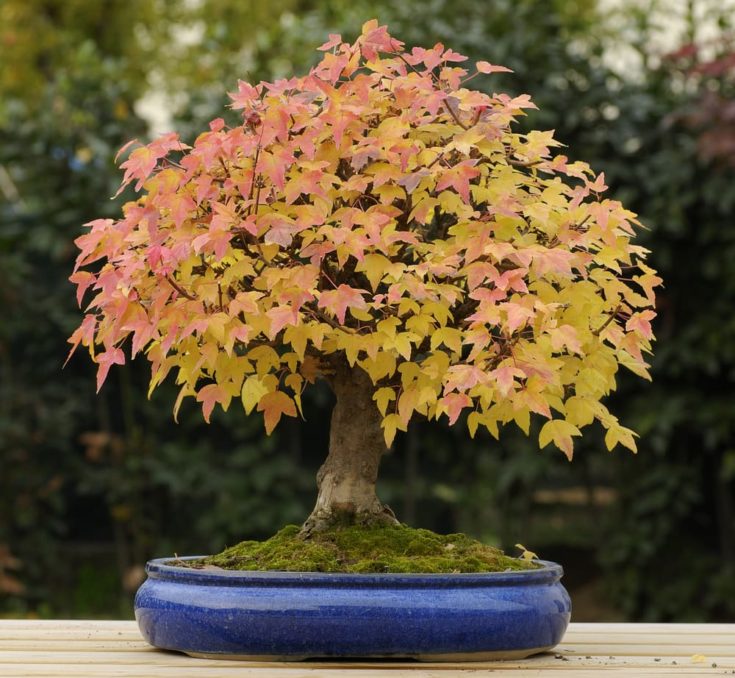 The Japanese Maple Bonsai is originally from Japan, and easy to recognize due to its beautiful foliage color. It has dense branches, covered in beautiful bright green leaves. The tips of these leaves are red but turn into an amazing fiery orange during the fall seasons. It’s best to keep the Japanese Maple outdoors, but during colder winter months, its root must be protected from frost. Their owners typically move them indoors during their peak seasons, to display their beautiful foliage.

The tree thrives when the soil received rainwater, as tap water is too alkaline. Since they are drought-intolerant, they will need plenty of water to survive. Overwatering could also be an issue, causing the roots to rot. Pruning is required every time pairs of leaves are completely grown, to help the Japanese Maple Bonsai maintain its shape. It’s typically not exposed to infections, but stress can cause scale and aphids. 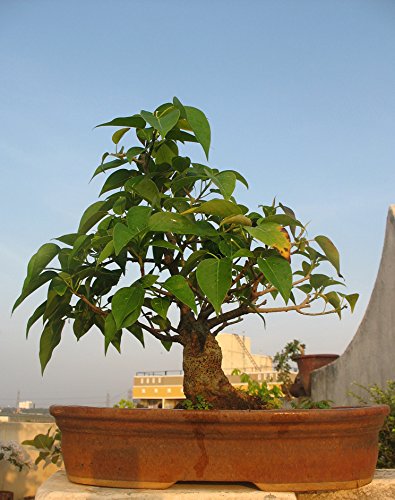 The Bodhi Tree is also known as the Ficus Religiosa, a semi-evergreen Bonsai that belongs to the Moraceae family. It’s sometimes referred to as the fig or mulberry tree. The common belief is that this is an Indian tree, but is now widely spread throughout Nepal, India, Thailand, Southwest China, etc. It’s easy to recognize a Bodhi Bonsai, due to the shape of its leaves, which resemble small hearts. For a long time, they have been extremely popular for their medicinal purposes, used to treat wounds and inflammations, but also gum and gout disease.

To help the Bodhi Bonsai grow, the requirements are pretty much standard as with other Bonsai species. It’s important to keep the soil moist at all times, and to monitor its content, always knowing when more water is needed. They require plenty of sunlight and bi-weekly fertilization. Bonsai experts recommended pruning the tree after every six to eight new leaves, reducing the number down to two. 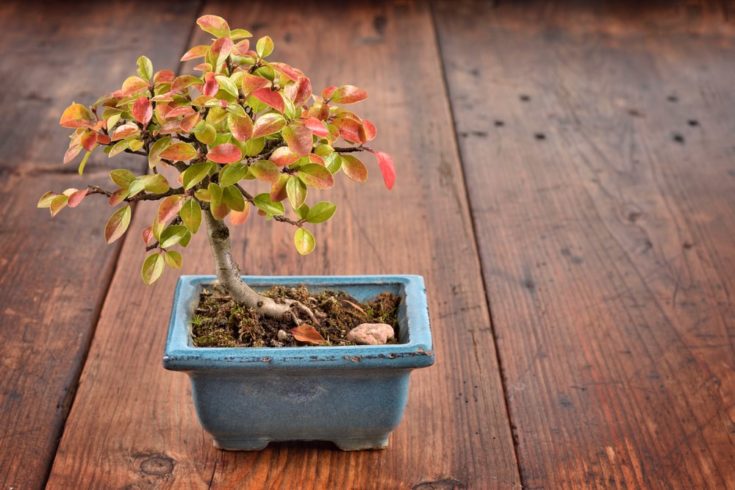 Also known as the Rock Cotoneaster, this beautiful Bonsai tree is native to China and the Himalayas. It’s a popular choice amongst beginner Bonsai enthusiasts, because of its tolerance to error. The tree is easy to recognize due to the growth of the leaves, which resemble a herringbone pattern. The color of the leaves changes from light to dark green with seasonal change. Different types of Cotoneaster Horizontalis will produce blossoms of different colors: some of them being red, others pink, and others white.

The tree thrives during dormancy in cooler periods, but there are cultivars that also perform well in warmer climates. They are best brought inside during extremely low temperatures, to prevent the freeze. They are not fond of water, although the soil should never be allowed to dry out completely. After the flowering phase in spring, it’s best to feed the soil every two weeks. As for pruning, it’s best to trim new shoots in late spring, cutting just above the node to reduce to one or two leaves. 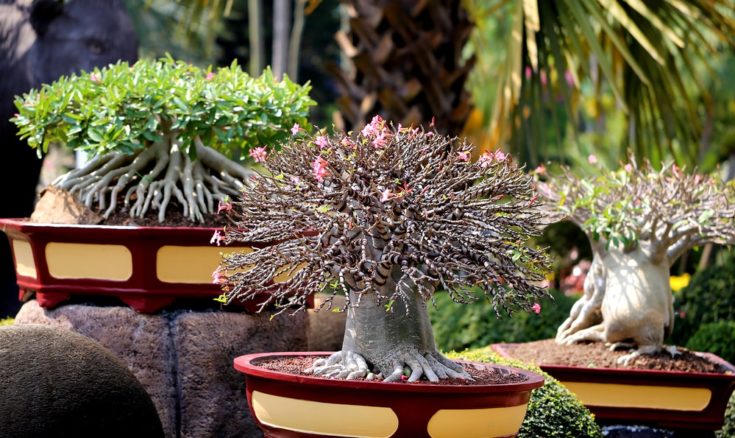 A native to Africa, the Baobab Bonsai has a very unusual appearance, which led to several myths about its provenance. During the winter, the branches of the tree look very similar to the roots, giving a sense of the Bonsai being upside down. The tree is very sensitive to cold and is best kept indoors if temperatures outside ever drop below 54 degrees Fahrenheit. Inside, they grow beautifully in a sunny window, but some prefer to supplement natural light with artificial growth lights whenever needed.

During growth seasons, it’s best to water the tree once a month, while always monitoring the soil to make sure it never dries out completely. Never water the tree when it’s dormant, as there are chances that the roots will rot. Liquid fertilizer is recommended for the Baobab and is generally applied right after watering the soil. Pruning can be done whenever the branched grow oddly, making sure to cut down branches in the spring. 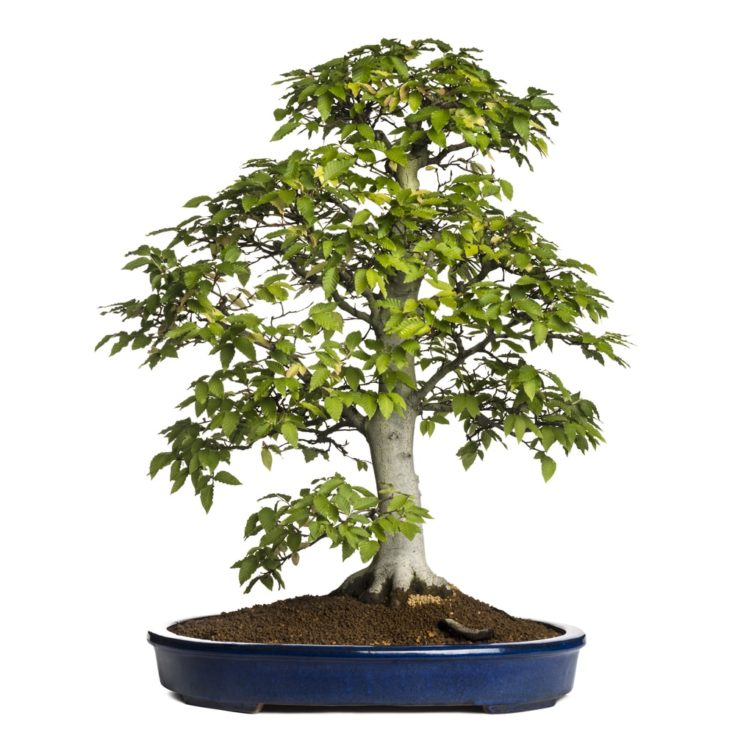 Straight from the heart of Europe comes the Common Beech Bonsai tree, characterized by beautiful rich foliage and white bark. It goes under different names: Green Beech, European Beech, or Fagus Sylvatica. It’s a Bonsai tree that’s very difficult to grow and could easily get a beginner frustrated. It’s typically grown outdoors but has to be protected from direct sunlight when temperatures peak in midsummer days.

It needs plenty of water, especially when temperatures are high. Failing to water it on a regular basis, could result in the edge of the leaves drying out. It should be fed once every two weeks until late summer, starting with fertilizer that’s high in nitrogen, and decreasing to low nitrogen by the end of the summer. Pruning is typically done in spring or late autumn, making sure to cut back to two leaves. 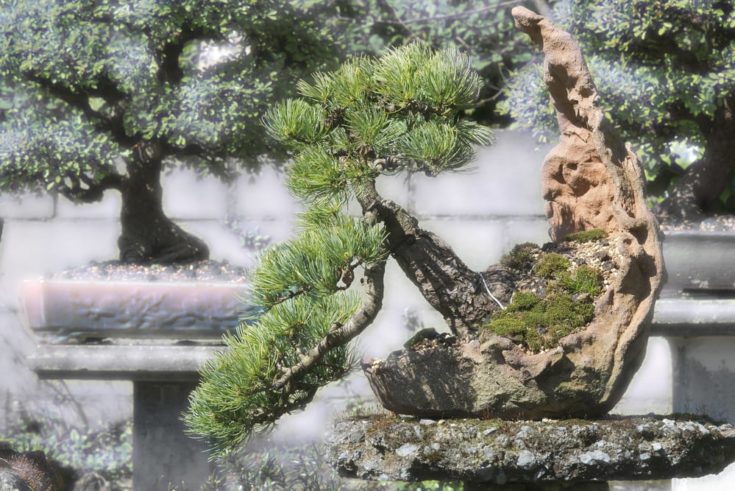 This feisty little fellow is a Japanese Bonsai tree that’s difficult to grow and care for but gives its owner great satisfaction when it does manage to thrive. Its leaves have a wax-like shine to them and come in the shape of needles. In order for the Spruce Bonsai to grow healthy, it needs direct sunlight, but cool temperatures. They don’t do well during hot summer days, and it’s best to shield them from the sun when temperatures peak in summer afternoons.

The soil of the Spruce Bonsai has to be moist at all times, but avoid having it soaked wet. Spider mites are the common type of Spruce infection and one that can’t be seen with the naked eye. It becomes noticeable when the base of older needles turns to a yellow color. Pruning is common in the fall, to avoid resin from bleeding out. When shoots mature, pinch them for about ½ of their length. 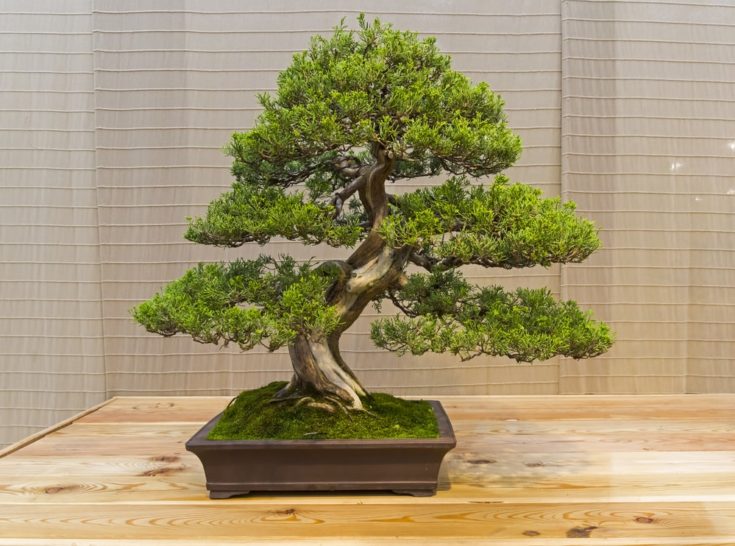 For a long time, the Juniper has been a favorite amongst new Bonsai enthusiasts, mainly because it’s a species that’s easy to grow. They are coniferous trees, with a rich blue hue. They produce berries that are often used as spices, but also make a common gin flavoring. It requires about four hours of daily sunlight, in soil that tends to be dry rather than moist. However, make sure that the soil isn’t left dry for too long.

The best practice is to water the soil, leave it to dry completely, then water it again. Pruning is typically done during spring and summer, by pinching back new shoots when they are at least one inch in size.

As you’ve already guessed, this Bonsai tree is native to the Brazilian rainforests. It’s recognizable due to its elegant branches and deep green foliage. An uncommon characteristic of the Brazilian Rain Tree is that its leaves will fold up during the night, or under low light conditions. Sometimes, they will also close under extremely hot temperatures. The brown bark of the tree peels up to reveal a smooth and beautiful finish.

This Bonsai tree requires even soil moisture, particularly with a humidity tray, as it is native to a tropical environment. While it tolerates cool temperatures, it should never be kept outside in conditions below 45 degrees Fahrenheit. When brought indoors, it needs its daily dose of light, which could also be artificial. When pruning, make sure that you leave a small stub. Otherwise, the tree could die-back.

So, caring for types of bonsai trees, especially a bit more difficult one that is so aesthetically pleasing, can be a bit daunting. But, hopefully, you have a better outlook on the process now that you’re armed with a bit more information. This can be a beneficial process and help get you back in touch with nature. The payoff is also super great because you’re distressing and caring for a beautiful tree that will grow and flourish for years to come! Which bonsai and how you want to prune it is entirely up to you.

Everything You Need to Know About Japanese Bonsai Trees

Scroll back to top
123shares