Electric Snow Shovel vs Snow Blower: How they Differ and What's Best for You Skip to content
We are reader supported. External links may earn us a commission. 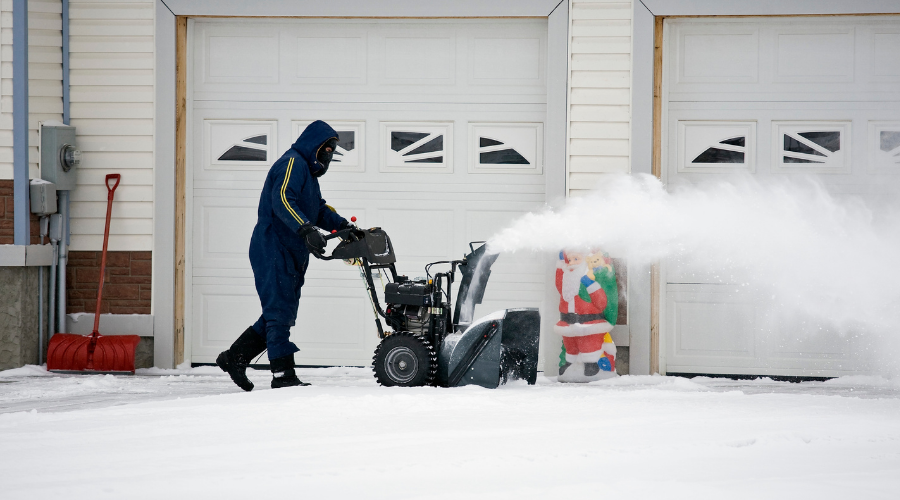 As snows descend upon us and we turn our minds to prepare for the great white piles, the electric snow shovel vs snow blower question arises. Which is better? And what’s the difference, for that matter?

This quick run-down will tell you all you need to know for deciding on your basic needs. Just come to the discussion with these things in mind: the size area from which to clear the snow, the type of surface you’re working with, and storage capabilities.

Snow blowers, or snow throwers, are machines designed to remove snow from someplace where the snow’s causing issues. For most of us, that’s going to be sidewalks, patios, decks, and driveways, but for businesses and more commercial locations, that might also include a roadway, railroad track, runway, or even an ice rink.

Technically, a snow blower is the wrong name for these machines. The snow isn’t blown away, but rather moved away by an auger or impeller (i.e., it’s not air blowing it away, but a mechanism moving the snow). Usually, this impeller discharges snow to one side only, unlike a plow that pushes forward and out to both sides.

Snow blowers generally come in two types: single-stage snow blowers or two-stage snow blowers. They come in a variety of sizes based on width and come in gas-powered models, diesel, or electric power options. They come in a range of sizes removing only a few inches of snow to a large, wide path (heavy-duty machines for this) of up to 20 feet wide, possibly wider, and as deep as six feet. Most of us don’t need anything that heavy-duty, so smaller machines are often the better choice.

The single-stage electric snow blower pulls snow into the machine using the auger (which is a paddle mechanism that you can see from the front) and directs it out of a discharge chute. The auger comes into contact with the ground, though, which makes them unsuitable for dirt surfaces. They’re great for paved surfaces like sidewalks and driveways, though.

Two-stage blowers use the auger to pull the snow into the machine and feed it into the high-speed impeller. This impeller then directs the snow out through the discharge chute. These can handle greater depths of snow than single-stage and their auger don’t touch the ground so you can use them on unpaved surfaces.

Electric snow shovels are, in many ways, similar to snow blowers. When you turn on the power to these beauties, they start sucking up the snow and tossing it to the side, out of your way. They usually give you a path 12-inches wide in snow up to 8 inches. They’re more compact than snow blowers, though, making them a bit easier to store.

Electric snow shovels run on electricity, as the name implies, using either a rechargeable battery pack or as a corded model. Corded snow shovels are generally more powerful than battery-operated ones, but that cord length limits their capabilities. You can often add an extension cord, though, to make this work a little better for you.

Electric snow shovels are generally more useful for smaller areas than snow blowers. They’re great for clearing stairways, for example, or decks. They use a lightweight design, are easy to maneuver, and generally pretty easy to manage.

Many come with an adjustable handle, making them easier to use by anyone in the family, and they come in either push or self-propelled models. Many of them also come with headlights, so you can use them after dark.

Basically, when comparing the two machines, the snow blower is good for big jobs that require more power and size and electric snow shovels are good for small “close to home” jobs.

Snow blowers will clear the sidewalk, driveway, and roadway in heavy snow, but the electric snow shovel is easier to handle and packs away into tighter spaces.

It All Comes Down to Need

Basically, the electric snow shovel vs snow blower debate comes down to this: what do you need done? If you’re looking for an easy fix for smaller spaces, the electric snow shovel is going to be easier to handle, maneuver, and store. If, on the other hand, you’ve got larger spaces to clear, a snow blower will serve you better. Be sure to consider the power source (corded, gas engine, battery-powered, or diesel), size, and stage type before purchasing along with the types of jobs for which you’ll need the machine.

How to Shovel Snow Faster (Safely!)