How to Get Rid of Cucumber Beetles in Your Garden - Backyard Boss Skip to content
We are reader supported. External links may earn us a commission. 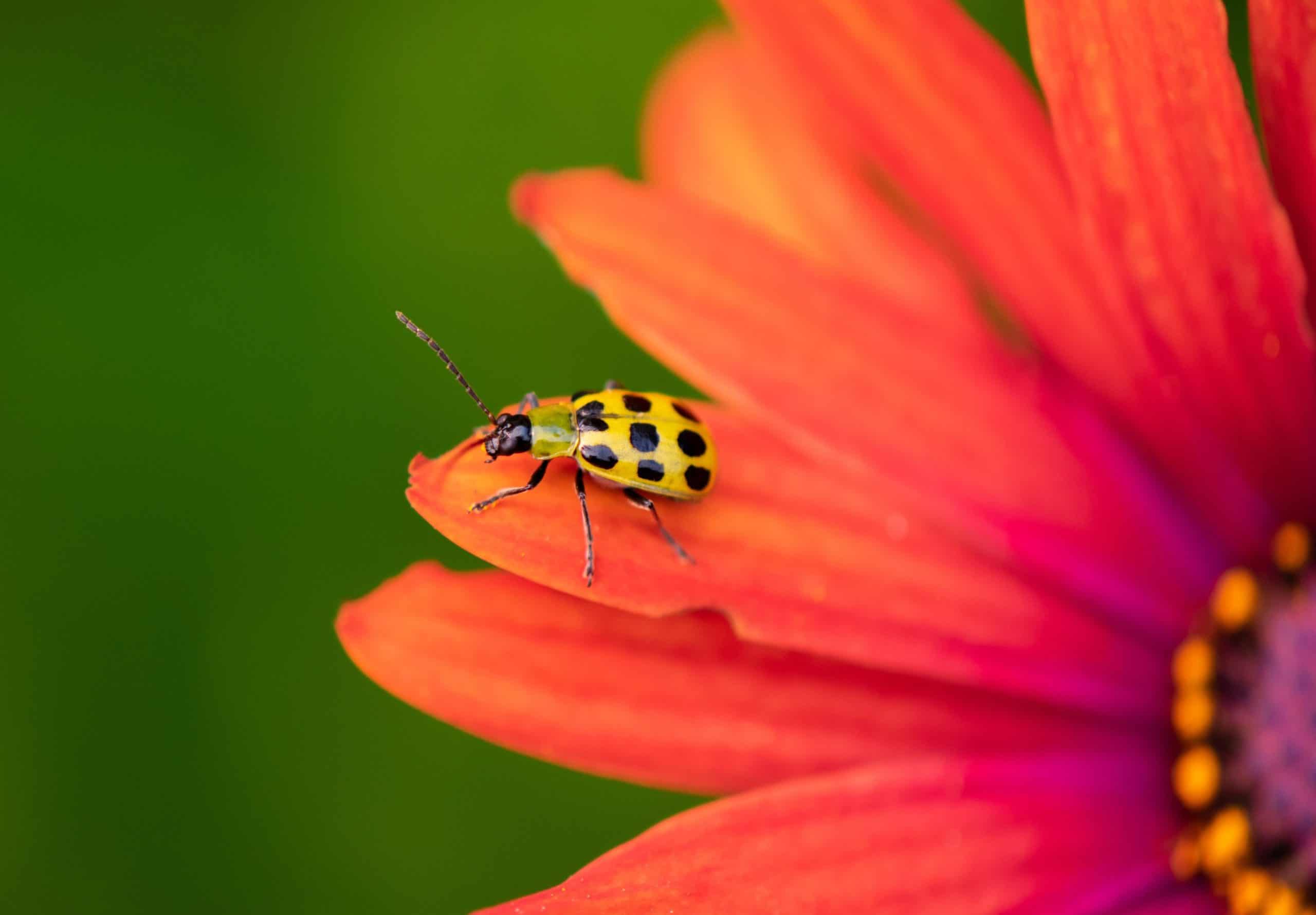 Cucumber beetles are a nuisance whether you have cucumbers, zucchinis, pumpkins, or green beans in your vegetable garden. They feed on the roots, flowers, and leaves, as well as the veggies themselves. The critters can stunt growth and reduce fruit production, which is the opposite of what you want for your crops.

While the cucumber beetles themselves don’t always cause damage, they do spread plant diseases that will. So, if you’ve noticed cucumber beetles wandering around your garden, or holes chewed through the leaves, it’s time to take action.

This guide will lead the way, detailing how to identify cucumber beetles, how to get rid of them, and how to prevent them.

Before you begin treating your garden for cucumber beetles, ensure that they are what you’re battling. Otherwise, the steps outlined below may not do the trick. Cucumber beetles are about 1/4 inch long and can be yellow-and-black spotted or striped. They have a dark-colored head and antennae. The larvae are white with a dark head and three pairs of legs.

The larvae will feed on the roots of your veggies, while the adult beetles will chew on the leaves and fruits, leaving unattractive scars, pocket marks, and holes. If it’s not cucumber beetles affecting your plots, consider one of the other common garden pests.

Tools You’ll Need to Get Rid of Cucumber Beetles

The tools you’ll need to battle cucumber beetles depend on the method you choose. Some of the items are for DIY solutions, while others are more traditional methods. Check them out below.

How to Get Rid of Cucumber Beetles

Sticky traps are an effective option for fighting many garden pests, such as earwigs, whiteflies, and gnats. Place the traps around the soil or next to the leaves. When the beetle tries to crawl onto the plant, it should get stuck in the trap and die. Sticky traps are also a good preventive measure, and you can tuck them away to keep your garden looking neat.

A row cover protects plants from the heat and cold, as well as unruly pests. Place the covers over the seedlings to effectively block the cucumber beetles. Remove the row covers during the blooming season to allow for pollination. Remember to inspect your plants for beetles before you recover the area. Row covers are also effective for prevention.

Insecticides can be a risky game with cucurbit plants since they are very sensitive. Organic options are usually the best bet since they will do less harm to your plants. You should apply the insecticide to the underside of the plant’s leaves because that is where the cucumber bugs are usually hiding. Repeat as necessary. Remember that insecticides can also kill beneficial bugs.

If insecticides aren’t your thing, you could also try using beneficial bugs. Insects such as ladybugs, green lacewing, and the spined soldier bug will feed on the larvae and eggs. They should also munch on other plant-eating pests, so you can relax knowing they’ve got things at least somewhat under control. They are also great for prevention, so you should always attract them to your garden.

Capture them by Hand

Inspecting your plants regularly and removing any beetles you see is a great way to keep the bugs at bay. They usually hide underneath the leaves, so that’s a good place to check. If you spot a few, there are several ways to remove them. With that in mind, this method isn’t effective for handling larvae or eggs.

First, knock the beetles off the plant and catch them with a piece of cardboard. You can also use a handheld vacuum to carefully suck them off the plant, but be careful doing this. Finally, you can apply petroleum jelly to a pair of rubber gloves and use your hands to pick up the beetles.

Cool as a Cucumber

Cucumbers are cool. Cucumber beetles? Not so much.

Frequent inspection is the best way to ensure your plants are free of bugs. Monitor the plants regularly, keeping an eye out for creepy crawlies and damage. And if you notice anything, act quickly to handle the issue before your plants become too damaged.

Also, using more than one method at once is the best way to fight back against cucumber beetles. So, if you’ve found a cucumber beetle in your yard, try out a few of these tips and let us know how it goes!

How to Prepare Your Soil for a Garden

How to Winterize Your Above-Ground Pool

How to Stack Firewood Neatly & Efficiently: All the Best Methods

How to Harvest Rhubarb