History and Origin of the Word Barbecue - Backyard Boss Skip to content
We are reader supported. External links may earn us a commission. 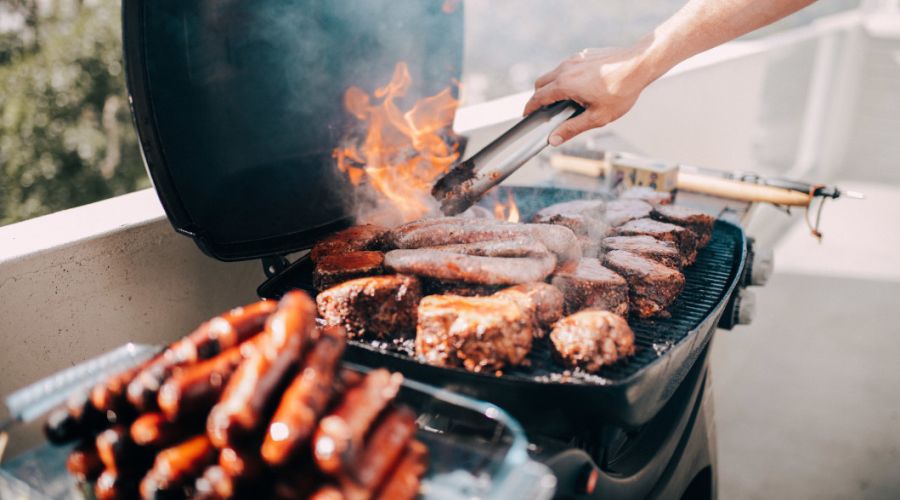 As millions of Americans take pleasure in outdoor barbecues, no one can determine where the term barbecue originated. That’s why today we want to present you the brief history of this extremely famous word, so you can satisfy your curiosity and impress friends and family next time you have a barbecue.

First Use Of The Word “Barbecue”

Research revealed barbecue, also known as BBQ and barbeque, may have begun in the Caribbean.

Upon landing in the Caribbean, Spanish explorers used the word to speak of barbecue as their method of slow-cooking meat over a wooden raised area at a low temperature. Barbecue can refer to the cooking equipment or to the meat.

In America, barbecue came about in the late 1800s during Western cattle drives, according to research. The cowboys and Native Americans were fed meats, such as brisket, that required five to seven hours of cooking to tenderize. Pork ribs, venison, and goat were also used.

The English word, barbecue, is recognized as starting off with the Taino Indians, as well as with the Spanish explorer. Initially, barbecue was popular in the states of Massachusetts and Virginia then migrated to South Carolina, North Carolina, Kansas City, Tennessee, Alabama, and Kentucky.

Barbecue got its start as whatever meat could be caught, from pigs to chickens to rabbits and squirrels.

Following the Civil War, barbecues eventually became more appealing as pork in most of the country. The low and slow method of cooking was almost always made ready by African Americans while many Americans were learning, experimenting, and perfecting the cooking method.

Barbecue evolved in big advances in the decades following the Civil War as barbecue stands opened up along the roadsides throughout the South. It is more than a meal, as it allows a large quantity of food to be cooked at once.

As barbecue stands took off, barbecue was devoured as an everyday food rather than for special occasions. As a result, barbecue restaurants also sprang up and barbecue was made over as sit-down food to enjoy.

It was the late 1950s and 1960s backyard barbecuing and grilling came into a way of life with family barbecues as people gathered for a good barbecue. Entertaining with barbecues, gatherings with friends, and block parties became the latest thing.

And new equipment was developed around this time such as using a gas grill, which made it easier to barbecue at home.

Today, organized American barbecue contests take place in just about every state. And Amazon.com also offers books that provide information on such topics as Southern Living Ultimate Book of BBQ: The Complete Year-Round Guide to Grilling and Smoking; The Barbecue! Bible and Smoking in the Boys Room: Southern Recipes from the Winningest Women in Barbecue, among many.

Currently, you can find a barbecue restaurant on every corner, and what’s more, shows on television today feature barbecue segments that offer recommendations on barbecuing and equipment.

Barbecuing is usually done in an outdoor environment and has many regional variations throughout the country and the world. Through many years it has evolved enormously. There are plenty of different styles of barbecue and it is now one of the most popular ways to not only prepare delicious food but also to spend quality time with friends and families. So if you also barbecue a lot, it is good you know from where this cooking method came from and how it became so popular.

Asphalt vs Concrete Driveway: Which is Better?

What is a Chicken Coop?

What are the Health Benefits of Pumpkin Seeds?