10 Houseplants to Avoid if You Have Allergies - Backyard Boss Skip to content
We are reader supported. External links may earn us a commission. 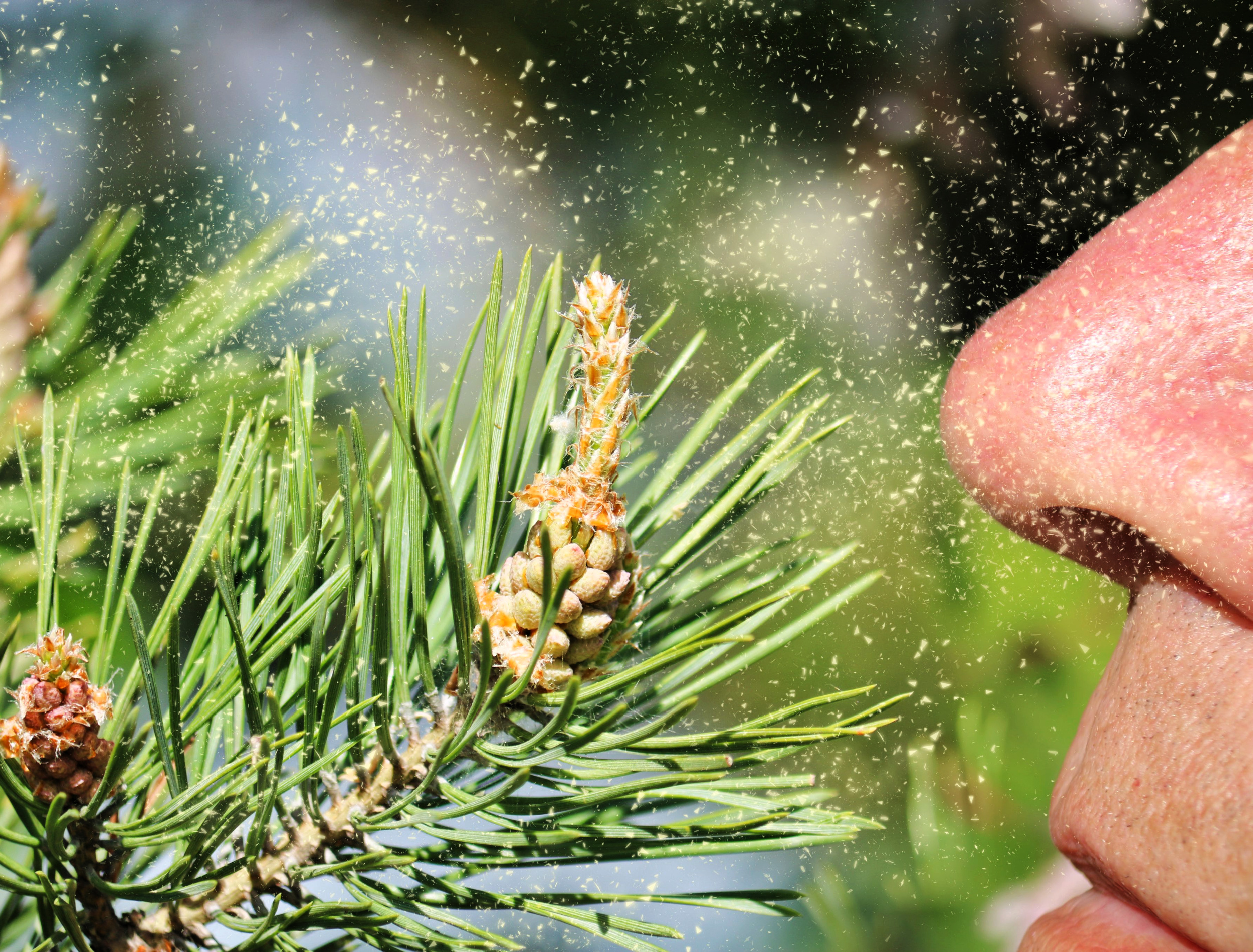 Some gardeners can enjoy any houseplant they choose without experiencing allergic reactions. Others who live with conditions like asthma or hay fever aren’t so lucky. Pollen from flowering plants often gets singled out as the cause of allergies to houseplants. However, mold, dust, spores, sap, and fragrance can also send your immune system into overdrive and leave you sneezing, sniffling, and coughing all year.

Check out these 10 houseplants you should avoid if you’re prone to allergic reactions.

These herbaceous perennials that are often grown as annuals add color and richness in fall and winter. If you’re tempted to bring them indoors, consider that they are from the same Asteraceae (daisy) family as ragweed.

Like that pesky weed, chrysanthemums can trigger hay fever or allergic rhinitis, symptoms — such as sneezing, runny nose, and itchy throat — to anyone vulnerable to their pollen. So, keep these fall favorites outdoors, or better yet, avoid them entirely.

If you have a warm, sunny spot indoors, consider Calibrachoa, also known as million bells, as a houseplant.

These ancient plants of more than 10,000 species are some of the detox wonders of the botanical world. They help to remove formaldehyde, toluene, and xylene from indoor air, which can often be two to five times more polluted than outdoor air. Another appeal of ferns as houseplants is their tolerance for low-light spaces.

However, ferns reproduce by spores that group together in clusters known as sori on the back end of the fronds. These tiny culprits can trigger allergy symptoms, such as sneezing and a runny nose. The fronds themselves can cause contact dermatitis.

At home in a variety of climates — tropical and sub-tropical included —palm trees make ideal houseplants. Their vivacious leaves and statuesque forms grace corners in your home and add drama to bare walls, entryways, and sunrooms.

Palms can be male, female, or both. The male of the species, however, is a prolific pollen producer and shedder, so if you suffer from hay fever, they will exacerbate sneezing, itchy eyes, and a runny nose. For houseplants, stick with female palms, which do not produce pollen.

While many houseplants boast all shades of green, African violets delight with brilliant, bold colors and blossom shapes that include single to double, fringed or star-shaped.

However, these compact perennials are loaded with pollen, and their hairy leaves trap dust. It will be challenging to appreciate their buxom beauty through the teary, red, itchy eyes they cause. Add coughing, sneezing, and stuffy nose to the mix, and their appeal soon dissipates.

If you crave a touch of the tropics indoors when the mercury dips outdoors, consider croton or peacock plants instead.

Native to the Americas and the Caribbean, yucca is a genus of 40 to 50 species of shrubs and trees. Spineless yucca (Yucca elephantipes or Yucca gigantea) and Spanish bayonet or dagger plant (Yucca aloifolia) are some popular choices for houseplants. Grown for their dashing foliage and stately shape, they demand attention in any indoor space.

However, yucca can cause both contact urticaria and contact dermatitis. With contact urticaria, you’ll develop instant, short-lived skin reactions such as itching, redness, and swelling. Contact dermatitis has similar symptoms, but not until hours or even days later. Also, watch out for difficulty breathing, which is another symptom yucca can trigger.

Bonsai is the Japanese art of growing miniature trees in pots or dishes. Based on the Chinese art of pun-sai, its mythical allure has lasted for thousands of years. Some of the most popular trees used for bonsai are junipers, maple, pines, wisteria, azalea, cedar, and cypress.

If you suffer from tree allergies, a bonsai passion could amp up sneezing, congestion, runny nose, and leave your throat itchy.

Houseplants like fiddle-leaf fig (Ficus lyrata) and weeping fig (Ficus benjamina) boast leathery foliage that helps to cleanse indoor air of pollutants such as ammonia, benzene, and formaldehyde. But these luscious leaves are magnets for dust, so you’ll have to clean them often.

Also, the sap of Ficus plants contains compounds called furocoumarins, which can cause severe rashes, a burning sensation, itching, and swelling on your skin. Often, it’s the leaves and roots that are the most dangerous.

Allergic asthma, sensitive skin, eczema, dermatitis, or latex allergies should prompt you to forget about figs as houseplants.

There’s much to love about English ivy, from its trailing and hanging glory to its companion charisma in floral arrangements. It rids indoor air of toxins like benzene and formaldehyde. Plus, it’s an ingredient in traditional herbal remedies for colds, joint pain, and, ironically, asthma.

But the sap of this vigorous vine can cause contact dermatitis and leave you with inflamed skin, burning, blistering, itchiness, and swelling. In some cases, it might also cause shortness of breath. Ingesting English ivy could trigger gastrointestinal issues for some.

Wear gloves and long sleeves when handling this houseplant. Or, for hanging baskets and arrangements, consider alternatives such as string of pearls, grape ivy, or Hoya linearis.

The coniferous plant many people crave at Christmas can also trigger allergies. But it’s not due to pine pollen, which springs to life in springtime so these trees can reproduce. The likely allergens are weed pollen, insect droppings, and chemical sprays lurking on the trees. Pinenes — the terpenes that give pine trees their heady, signature scent — are also known allergens.

Mold spores are also major histamine boosters on Christmas trees. A study in the Annals of Allergy, Asthma & Immunology revealed 50 different types of mold on 28 indoor coniferous trees. The publication categorized 34 of those molds as potential allergens.

Also, conifers contain sap, known as colophony or rosin, which can cause contact dermatitis. Watch out for a rash similar to poison ivy.

Elephant ear (Colocasia esculenta, alocasia plumbea, alocasia metallica, or alocasia zebrina) has sprawling, heart-shaped, rubbery leaves that are dead giveaways for this plant’s name. They’re also its main attraction as both an indoor and outdoor plant. This tropical perennial grows from an edible tuber that is a staple in Asia and the Caribbean.

However, the juice or sap of elephant ears contains oxalic acid and a protein called asparagine. They can cause severe skin irritations, burning, inflammation, and pain. For a houseplant with super showy green foliage, try a bird of paradise, or Calathea orbifolia, a South American prayer, plant instead.

Nothing to Sneeze At

These houseplants that trigger allergies can steal the pleasure of your indoor garden. But they are not the only ones. A good rule of thumb is to watch for any allergic reactions when introducing a new houseplant into your home. Place it outside for a few days to see if your symptoms subside. If they do, it’s best to find the plant a new home outdoors.

Have any houseplants that worsen your allergies? Help others by sharing them in the comments.

Everything You Need to Know About Japanese Bonsai Trees

How to Care for Your Money Tree