How Many Roosters Can I Have in a Hen House? - Backyard Boss Skip to content
We are reader supported. External links may earn us a commission.

There are many reasons why you may want to keep a rooster in your chicken coop, and if you are considering doing so you may be curious about many hens are ideal per rooster, and what concerns you should have. Before committing to a cute, fuzzy ball of fluff that is prepared to take on the duties of the ‘man’ of the coop, you may want to read a bit about rooster responsibility.

I’m rather partial to having one in the coop but only do so based on a few things I’ve learned over the years of keeping chickens. The following article explores briefly some questions you may have, as well as why keeping a rooster isn’t always a bad idea.

When people say they are keeping chickens, generally they mean hens or the female species of a chicken. Raising chickens is done for a variety of reasons: to have a fresh supply of eggs, as companionship, to raise produce, and even for insect control. You don’t need a rooster, or fertile male of the species, to be successful with any of these endeavors. 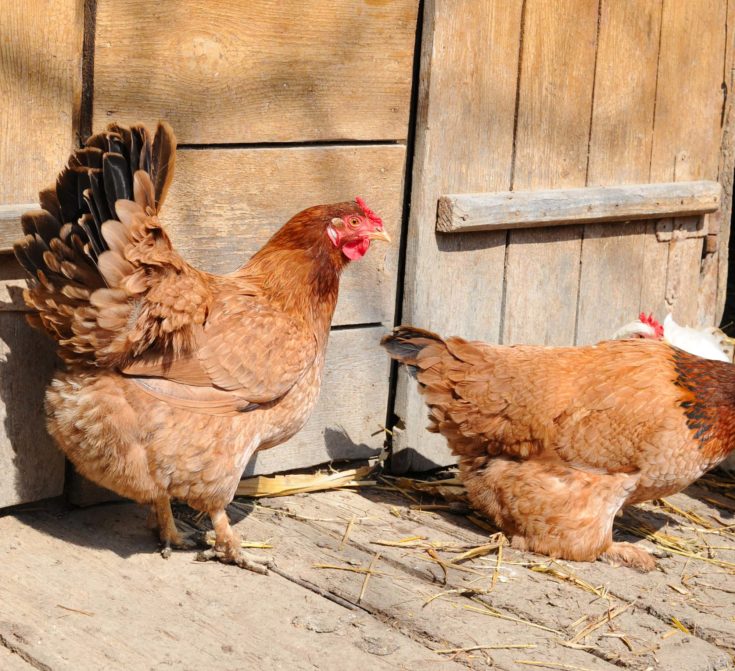 In fact, unless you want a rooster for a specific reason and are comfortable with the habits of chickens in general, I don’t suggest having one around. By no means am I anti-rooster however; as mentioned above I always keep one in my coop. Being informed of a few things in advance is definitely worth your time to avoid potential trouble.

You may have decided to keep a rooster for a few reasons, for one, they are fun to hear each morning (and sometimes all afternoon). Be aware you may need to get used to it, but you will. My boy is quite vocal on a regular basis and we don’t even hear him half the time anymore.

Roosters are also very protective of their ‘girls’ and will go after predators with little to no hesitation. This is a great reason to keep them if you live where your chickens may become prey. Just be sure your rooster doesn’t think you are a problem (more on that later).

If you are wanting to hatch your own chicks, then you need a rooster to ensure the eggs you are collecting are fertile! A common misconception is you need a rooster for hens to lay, but that isn’t true at all. Hens will lay eggs no matter what, but if you want to hatch those eggs you need a male in attendance. There is no difference in an unfertile egg vs fertile egg for eating purposes, and most people don’t even know what to look for to know which is which. Also, be aware that most hens aren’t going to hatch their own eggs either as the domestication of the chicken has bred a lot of that instinct out. There are certain breeds that are more broody than others. 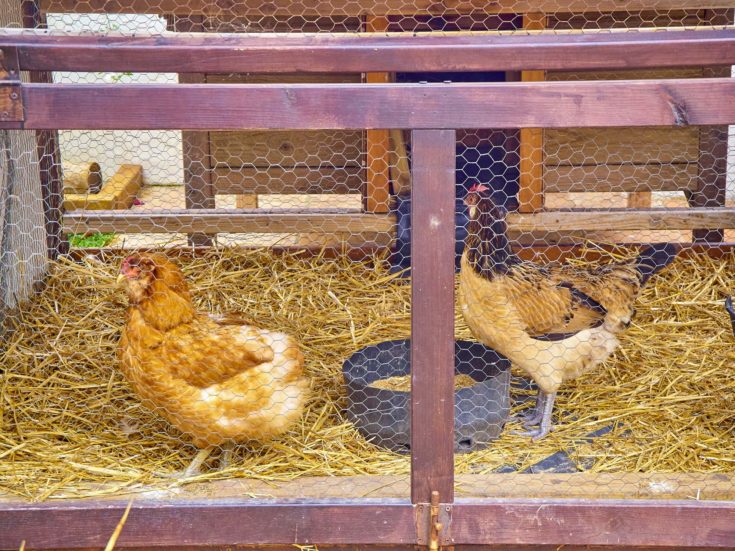 Concerns of Keeping a Rooster

I love my rooster. I owned his mommy and raised him the coop alongside other males and with space enough that he could grow and not become territorial. That isn’t a guarantee of success of raising an aggressive rooster however, and mark my words, if he had ever come after me or my kids, he would have ended up on the grill for sure. And that may be one of the biggest concerns there is with roosters: aggression, and the owner’s inability or unwillingness to cull the behavior from the flock.

An aggressive rooster is dangerous. Their spurs can reach 2 to 4 inches in length and be incredibly sharp. In fact, they are sharp enough to tear open your flesh with very little effort.  Although there are ways to remove them, an aggressive chicken can harm you with more than just a spur. Even hens are quick to go after predators with both beak and wings and inflict quite a bit of hurt.

Although any rooster has the ability to be aggressive, there are definitely certain breeds that are more quiet and tame than others. Some of their calming behaviors may come from how you handle and raise them when they are young (for example, being around them as they grow and raising them with other males in the hatch). But I have personally found that breeding is the single most influential trait to a non-aggressive bird. The following breed suggestions are known for their quiet temperament and even friendly ways: 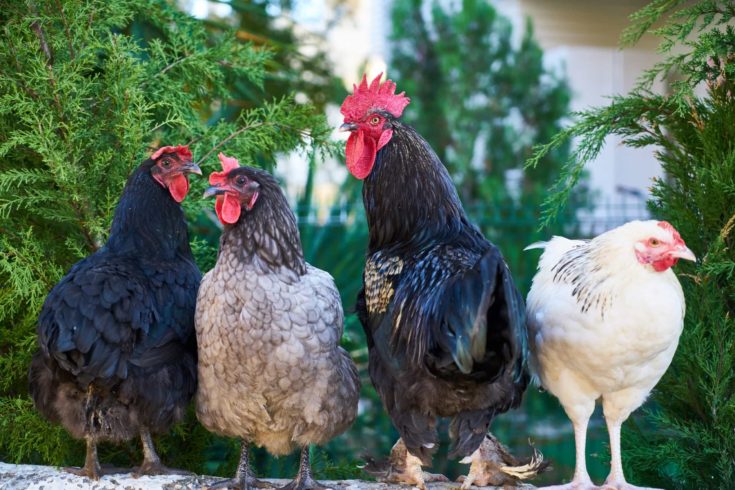 Before investing in a little ball of fluff, you need to know your own zoning laws concerning keeping livestock animals, such as chickens. Many urban areas now allow the keeping of a hen or two, mainly because they don’t make a bunch of noise (at least, not always), but roosters can be rather annoying to those who aren’t used to them. Roosters don’t just crow at dawn, and each may be different in their interpretation of what dawn is. A 3 am wakeup call is not out of the ordinary, neither is a mid-day serenade.

Roosters are breeding animals. And no, you aren’t going to ‘fix’ your rooster. Yes, it can be done (that’s how you get some of your plump, juicy eating chicken), but it’s done specifically for meat production. And since it is done prior to sexual maturity, you might as well get another hen that at least will produce eggs.

Since roosters are there for their ‘ladies’ you may find they are overly enthusiastic in their job description. This is why knowing how many hens per rooster is suggested is an important fact to be aware of. This way you can minimize the stress of being serviced on any one animal, which can lower their egg production and make them uncomfortable. Despite this, you most likely will find that your rooster has favorites (those hussies!) and you may want to invest in a protective hen saddle if you see a hen lacking feathers across their back due to being mounted too often.

How Many Roosters Per Hen House

So how many roosters can you have in a hen house? Truly, the questions you need to start with are how many hens you have- and the space you are providing if you are looking to have more than one rooster.

If you only have 2 or 3 hens, you may want to avoid having a rooster altogether, but if you keep a small flock, it is generally suggested to keep no more than one rooster per 5 to 10 hens. You can most certainly keep more than one rooster, but if you do so it is very dependent upon the space you have as well. Roosters are absolutely going to go after one another, and it is important to provide them space to move away from most territorial roo. This allows them to more or less live in relative peace without poking at one another more than every now and then.

How Many Square Feet of Coop Space per Chicken 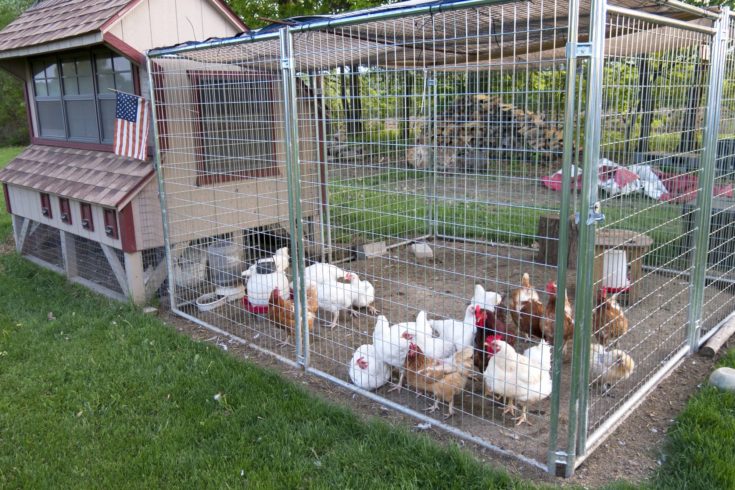 A general rule of thumb is to provide an 8 x 8 foot space outside the coop for each chicken you own. This is not a hard and fast rule however and I have found chickens to thrive in smaller areas if provided for properly. But, if you are keeping more than one rooster in an enclosed area it is best to give them this much room or more, and also provide them areas from which they can be out of site from one another- or keep a healthy distance from one another.

I also have found that keeping more than one rooster at a time is best done if you have raised the roosters together, or in the same environment from a chick, to have some basic respect. This way their squirmishes are more likely to look like fistfights rather than a battle to the death. I don’t suggest introducing a sexual mature rooster to a flock that already has mature roosters in attendance unless you know exactly what you are doing. At best, you end up with a bruised and battered newcomer, at worst, a blood bath.

Hopefully, this article has explained not only the number of roosters you can have, but also a few questions you may not have considered. Keeping a rooster takes a bit of foresight and preparation overall to make sure you are one, abiding by the laws of where you live; and two, providing a healthy environment for your entire flock. If you already have a coop or are planning on building a hen house and want to include a rooster, think ahead about the breed you prefer and how you will both raise and socialize it.

If you have any questions or comments, please let us know below. And, as always, please share!

5 Homemade Pesticides For Your Garden

Why You Should Use Lime in Your Lawn

5 Best Plants To Grow in Your Fall Planters

Scroll back to top
93shares