How to Butterfly and Grill Cornish Game Hens - Backyard Boss Skip to content
We are reader supported. External links may earn us a commission. 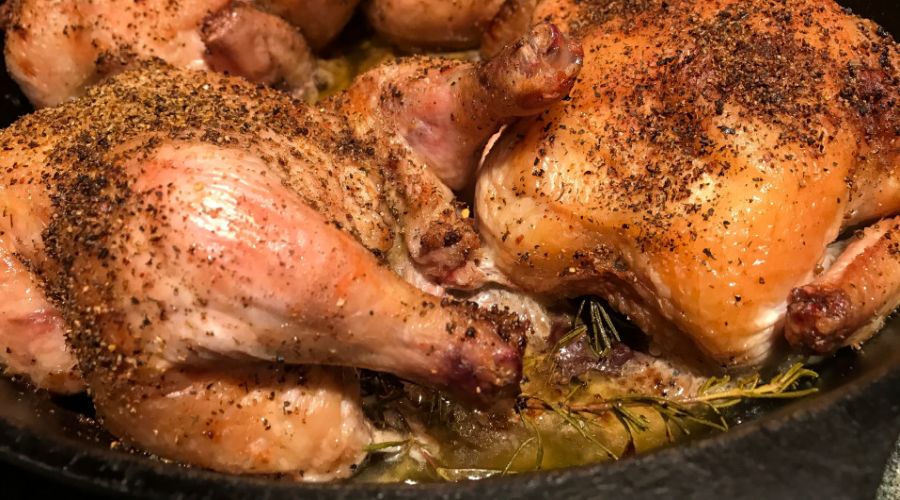 For this recipe, select four hens, each about one-and-a-half pounds.

How to Butterfly Cornish Game Hens for the Grill

Note: When you’ve finished the skewering process, the game hen will resemble a letter ”M,” with each leg and breast half resembling one side of the “M.”

How to Grill the Cornish Game Hens

Combine the 3 Tbsp of brown sugar and spices in a bowl. Rub the game hens with the sugar and spice mixture. Refrigerate the hens while preparing the grill.

Light a large chimney starter filled with charcoal and allow to burn until coals are fully ignited and partially covered with a thin layer of ash, 20 to 25 minutes. Place a 9 x 13-inch disposable aluminum pan in the center of the grill. Empty the coals into the grill, dividing them evenly on either side of the pan (you are setting up an area for indirect grilling). Position the cooking grate over coals and cover the grill, allowing the grate to heat up for about five minutes. Clean the cooking grate with a grill brush, then lightly oil the grate with vegetable, or olive oil.

While the grill is heating, combine the ketchup, 2 Tbsp of brown sugar, soy sauce, vinegar, mustard, and garlic in a saucepan. Cook over medium heat, stirring occasionally until the glaze is thick and slightly reduced.

Place the Cornish game hens on the center of the grill (over the aluminum pan) with the skin side down. Open the grill lid vents completely and cover the grill. Grill the hens until an instant-read thermometer inserted in the thickest part of the thigh registers 160 degrees Fahrenheit and the skin of the hens have started to turn a nice golden brown color (this should take about 20 to 30 minutes).

Using grill tongs, move the hens to the hot sides of the grill. Cover the grill and continue to cook the birds until they are browned (about 5 minutes). Brush the hens with half of the glaze, then turn them and cook for 2 minutes. Brush the remaining glaze over the hens, turn them again and cook them until an instant-read thermometer inserted in the thickest part of the thigh registers 170°F degrees (no longer than 3 minutes).

Remove the hens from the grill and place them on a cutting board. Allow the birds to rest for 10 minutes (this is important). To serve, cut each hen in half through the breastbone and place 2 halves on each place setting. Makes 4 servings.

Chicken served that way doesn’t only look nice, but it is also extremely delicious. By following our guide you won’t have any issues preparing it. As with any other recipe, it might take a while until you master it, but in case you fail a couple of times, don’t get discouraged! Also, don’t be afraid of experimenting. Use different spices to find the perfect taste. And what’s most important; enjoy your chicken!

How to Build a Backyard Fish Pond

12 Essential Garden Tools for the Beginner

What Are The Benefits of Birdwatching?

Scroll back to top
22shares