How to Get a Better Smoke Ring - Backyard Boss Skip to content
We are reader supported. External links may earn us a commission. 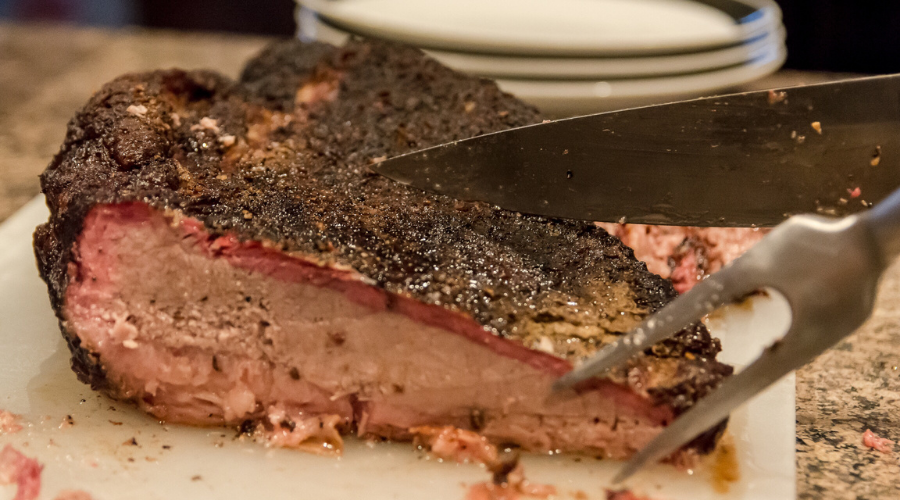 Everyone who’s read a little bit about barbecue or has watched a few cooking shows on TV knows about the smoke ring. It’s that line of pink color that runs beneath the exterior crust of barbecued meat. Above is a photo of a pretty darn good smoke ring on a brisket.

But maybe a better question is, should you care about smoke rings? Let’s find some answers in this article!

What is a Smoke Ring?

Some will tell you that it’s a sign that the smoke flavor of the fire has penetrated into the raw meat, but it isn’t. Others will claim that the smoke ring is the difference between true barbecue and plain grilled meat. It isn’t that either. But if you’re looking for a good smoke ring in your type of meat, here are some tips on how to achieve it.

It’s important to remember that the pink smoke ring is not necessarily a sign of quality barbecue. You can produce awesome ‘cue that has a thin or nonexistent smoke ring formation, or inedible meat that has a big bright ring. As you’ll see below, it’s easy to chemically cheat your way to a perfect smoke ring.

This is why competition barbecue judges, as well as barbecue connoisseurs, ignore the smoke ring when judging meat quality. And the smoke ring has nothing at all to do with any smoky flavor in the meat.

So why bother trying to get one? Because it looks good, and many people still won’t believe that they’re having a true barbecue if they don’t see the ring. Still, never forget that in the final analysis, it’s taste and tenderness that matter the most. Don’t ruin your meat just to get a smoke ring.

Cheating Your Way to a Smoke Ring

Oddly enough, you don’t even need smoke to make a smoke ring. All you have to do is expose your meat to nitrogen dioxide. The NO2 will produce nitric acid on the surface of the meat. The acid soaks in and reacts with the chemical myoglobin, which is what gives meat its color, to produce the pink ring beneath the surface of the meat.

The no-brainer way to get a clean smoke ring is to rub the meat with a curing agent that contains sodium nitrites, such as Instacure or Tenderquick. This will produce all the nitric acid you need when exposed to heat and the meat’s juices. Here’s some on Amazon:

Basically it's a bag of salt for curing meat. Yes, it's that simple.

If you prefer to try to get a beautiful smoke ring the natural way, try to extend the cooking process so the ring-producing reaction has more time to work on your regular, electric smoker. Using moist, cold meat straight out of the refrigerator, along with a lower temperature, will give you extra cooking time.

You can also use plain wood, or green wood for fuel since wet seasoned wood puts out more nitrates when it burns. Adding a charcoal briquet to your fuel will also produce more nitrates.

As we now know, the nice smoke ring doesn’t change the taste of the meat. It’s more an aesthetic aspect that many barbecue lovers want to achieve while smoking their meat. So, if you want to get it on your meat, just follow our tips.

You’ll need to experiment because every piece of meat is different, but with a little practice, you should be able to produce impressive smoke rings consistently. Try it and see how you like better-looking meat!

6 Tips For Caring For Your Lavender Indoors and Out

6 Tips for Growing Your Own Lettuce

Which Plants Grow in Alkaline Soil?