How to Get Rid of Gnats in Your Garden - Backyard Boss Skip to content
We are reader supported. External links may earn us a commission. 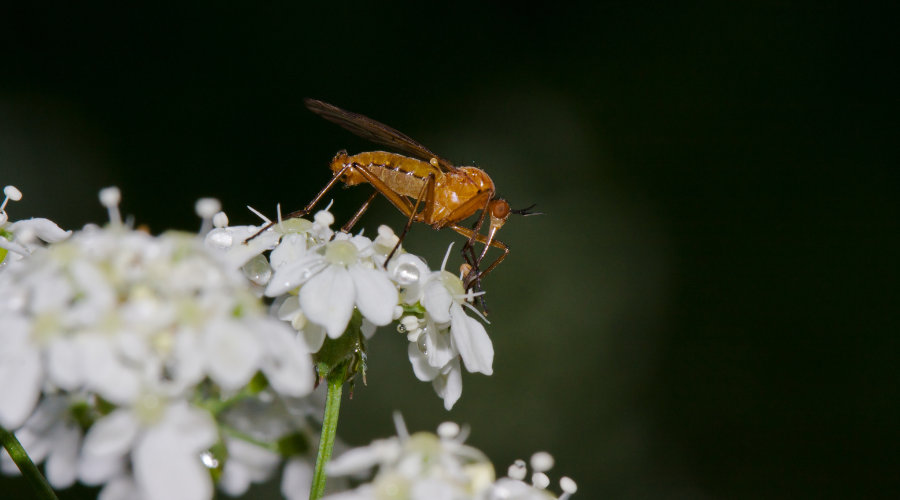 Gnats are pesky little bugs that not only fly into your eyes and nose unexpectedly but also cause damage to gardens and crops. While the adult gnats don’t pose much of a threat to your plants, the eggs and larvae they lay will eat away at a plant’s roots and the healthy fungi within the soil. If left unattended for long enough, gnat larvae will cause your plants to wilt and die by cutting off the main highway for plants to get their nutrients.

Follow this easy step-by-step guide to getting rid of gnats in your garden but first, evaluate your garden to find out if gnats are your problem, what type of gnat(s) are infesting your garden, and what is attracting them.

Does My Garden Have Gnats?

Gnat larvae are typically a quarter of an inch long and have white translucent bodies with black heads. They leave a slime trail similar to that of a slug or snail, so it’s best to investigate your garden if you come across an abundance of slimy trails throughout the week. Gnats reproduce rapidly, so it is best to take care of any gnat infestation with organic compounds before they become too plentiful and pesticides become the next method of extraction.

There are over 1,000 different types of gnats that can inhabit your garden, but four of them are typically the culprit once you notice them.

What are Gnats Attracted to?

Aside from eye gnats being attracted to the secretions of your facial fluids, the overall spectrum of gnats is attracted to different things. Fruit flies like fruit, eye flies like eyes, so we should be extremely happy there isn’t a “Brain Fly” buzzing around somewhere in our gardens! Some gnats, like the Buffalo Gnat, attribute the male species to liking nectar, while the female species actually bite mammals in order to gain enough protein for egg formation.

Gnats are typically very fond of sweetness, regardless of if it is fresh fruit or rotten berries. Gnats, while small, are definitely not afraid to inhabit the most awful spaces as long as fruit, vegetable, or animal flesh is readily available for consumption.

How to Get Rid of Gnats in Your Garden

A liquid as common as apple cider vinegar is considered a godsend when it comes to removing gnats from your garden. By mixing a cup of water with two tablespoons of apple cider vinegar, and adding in a few drops of dish soap, you can create little pods that the gnats will fly into but will ultimately be trapped by the dish soap. Make sure to put a layer of plastic wrap on top of the opening and poke a few holes to ensure the gnats can go in, but will never escape.

2. Cover the Soil with a Layer of Sand

For those of us that continue to fight a constant battle with gnats, this is a great method for curing the issue. By layering your plant bed with a thin coat of sand, you make it virtually impossible for gnats to go into the soil to eat your plant’s roots. You can also invest in a substance called Diatomaceous Earth which is basically an organic powder that will trap gnats until they die of starvation.

These types of traps can be hung around the garden or posted into the soil itself. We are all familiar with this sort of bug trap somewhere around the home. This type of gnat trap is typically best for indoor gardens and greenhouses, as they have a tendency to capture insects that actually help your plants as well. It is also recommended to invest in non-toxic and double-sided sticky fly traps for maximum efficiency, but also to keep any random chemical compounds away from the luscious life of your garden.

Bacillus thuringiensis israelensis, aka “BTI”, is a biological control mechanism that targets the larvae of gnats but does not intrude on other insects such as Bees and Butterflies. In order for this method to be effective, you must follow the directions on the box to a “T”, as an even distribution of BTI is essential for it to work its best. Keep in mind, this method is great for killing off the gnats in your soil, but it is virtually ineffective for the gnats flying into your face every three seconds.

Beneficial nematodes are microscopic roundworms that enjoy hunting down gnat larvae and feasting on the unhatched eggs. Beneficial nematodes will need consistently moist soil to thrive and do not cause any harm to humans or plant life. Be advised, this option can be rather expensive and it is best to go to the store and purchase them rather than have them shipped, due to the fact that any long exposure to warm or hot weather will most likely kill them before they arrive at your home.

Although this method is generally intended for larger insects, a bug zapper is a sure way to eliminate a large chunk of gnat pests. Bug zappers are typically low efficiency and low maintenance but have been a tried-and-true method of bug mitigation for decades. Aside from cleaning the bug pan from time to time and making sure to keep the zapper out of the rain, this method is almost guaranteed to get a majority of the job done.

Gardening is great for your health, but it can become a challenge when you have to deal with gnats who eat at your hard work. Gnats are one of the most annoying pests that can inhabit your house or garden and only come second to mosquitos. There are countless amounts of gnat species, but you should only be worried about the four types we mentioned above.

While a few gnats flying around the perimeter of your garden is completely unavoidable, you can deploy a few of these methods in order to combat the larvae from getting into your soil or plants, and making a mess of what you worked so hard to grow. While there are numerous types of gnats, there are also many options to dispel them from your life, and more importantly, keep them out of your nose!

The 10 Most Beautiful Perennials That Bloom All Summer