How to Grill Corn on the Cob - Backyard Boss Skip to content
We are reader supported. External links may earn us a commission. 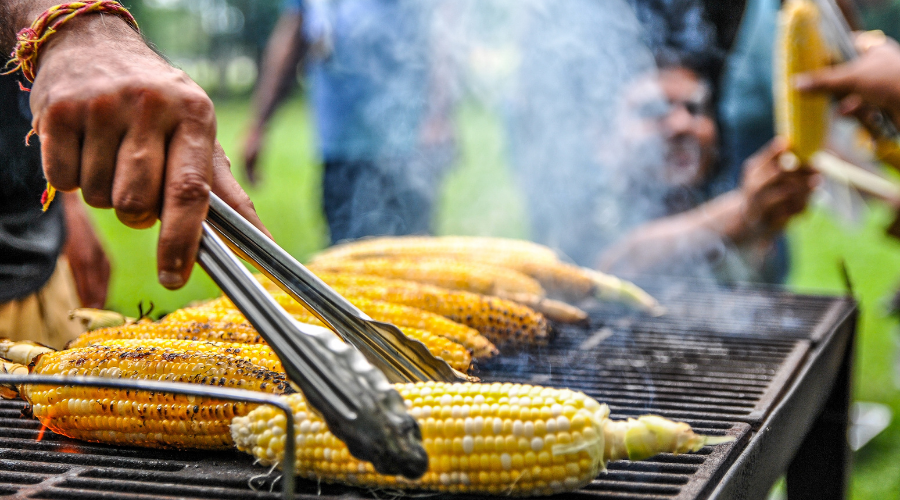 Anyone who has ever cooked on a grill is familiar with the basic procedures for cooking meat. Practically anything can be cooked on a grill using correct preparation and heating. You can grill things, such as eggs, bread products, or side dishes, with just a little creativity and know-how.

In this article, we will discuss two different methods of grilling sweet corn, which is the best vegetarian grilled recipe. While you’re probably familiar with the boiled sweet corn recipe, the truth is that you haven’t really enjoyed corn fully until you’ve had it grilled.

Grilling Corn on the Grates

Similar to grilling a piece of meat, you can put corn directly on the grates. Grilling the freshest corn without any wrapping will give you a sweeter flavor because the sugars in the kernels will begin to caramelize. You can use just the tiniest bit of olive or vegetable oil, very thinly spread over the kernels to keep the ear of corn from sticking to the metal as it cooks. Watch for individual kernels beginning to turn golden brown, as this indicates that corn is done. This corn, however, will be a bit drier than corn which is steamed, due to the loss of liquid that will occur during open-air grilling, but it’s a part of a lower-calorie diet.

If you prefer your corn a little bit on the juicier side, you can also leave it in the husk or wrap it in a single layer of aluminum foil. It will keep the water released during the cooking process contained, essentially steaming the ear of corn as it grills.

To grill corn in aluminum foil, you first need to husk the corn as you normally would, removing all outer coverings, including the corn silk attached. Some people prefer to wrap this corn immediately in aluminum foil. Place each corn cob diagonally across a square section of foil and roll it around the corn after adding some spices, such as garlic, chili powder, nutmeg, and season with salt, to enhance the smoky flavor.

Others recommend soaking the corn for about 20 minutes in a pot of cold water, making sure that it is completely immersed. When you take it out of the water, shake them around a bit to get rid of any extra water.

If you plan to grill your corn in the husks, remove about half of the outer layers. Soak the corn, husks and all, in cold water for about 15 minutes. Shake the corn to remove any extra water. At this point, peel the husks back and get rid of any silk inside. It is when you should add your herbs if you are so inclined.

Then pull the corn husks back up and secure them in place with a bit of twine. Rotate the corn on the charcoal grill, then move it away from direct heat and close the lid, letting it sit there for about 15-20 minutes. Once the corn kernels begin to darken, it’s a good sign that the corn is ready.

Whichever method you use, add unsalted butter, salt, and a touch of black pepper after cooking to season the corn. Rotate the corn periodically, and let it remain on the outdoor grill for 15 or 20 minutes. Pay attention to the timing since leaving it on too long will result in soggy corn.

Grilling Corn on the Coals

Preparation Of The Corn

This method is a bit unusual but produces some of the tastiest corn possible. Because of how it is prepared, it will offer both the sweetness of corn allowed to caramelize and the juiciness of steamed corn, delivering the best of both worlds.

To prepare corn to be grilled directly on coals, cut off the end of the husk on each ear of corn. You will want to cut off just enough that you remove the end of the ear of corn itself. Once you have done this, get a large pot of water, and submerge the ears of corn in it, arranged so that the cut-off ends face down into the pot. Add salt and sugar to the water until it tastes noticeably of each. Allow the ears corn to soak overnight in a refrigerator.

Once you’ve finished grilling whatever meat you are preparing, remove the grates of the grill. Lay the ears of sweet corn onto the coals, making sure that each one is in direct contact with them. Rotate the ears regularly until the husks begin to blacken and burn off. As the husks burn away, look for browning the kernels, much as you would if grilling corn on the grates. Once you see noticeable browning, remove the corn from the fire. A gentle rub with a paper towel or dish towel will remove what remains of the husk.

Because the corn is laid directly on the coals, it will be hot enough to caramelize the sugars, even with the added liquid from the soaking, which is used to keep the corn from burning or drying out, producing extremely sweet and juicy ears of corn.

Fresh corn is delicious no matter how it is prepared, but grilling it adds extra zest that your company is sure to appreciate. Grilling corn is a very fast way to prepare something delicious. You can prepare it for multiple occasions, such as an addition to your barbecue party in your backyard or as a snack during camping. No matter when you decide to grill the corn, it’s always going to be the best moment!

Let us know how do you like to grill your corn, and what are your favorite cob recipes in the comment section below, and as always, please share!

How to Make a Grill Out of a 55-Gallon Drum

The Best Portable Grills for On-the-Go

How to Thaw Meat: Fast or Slow

Why You Need An Outdoor Cooking Diary