How to Grill Sausages Without Flare-Ups Skip to content
We are reader supported. External links may earn us a commission. 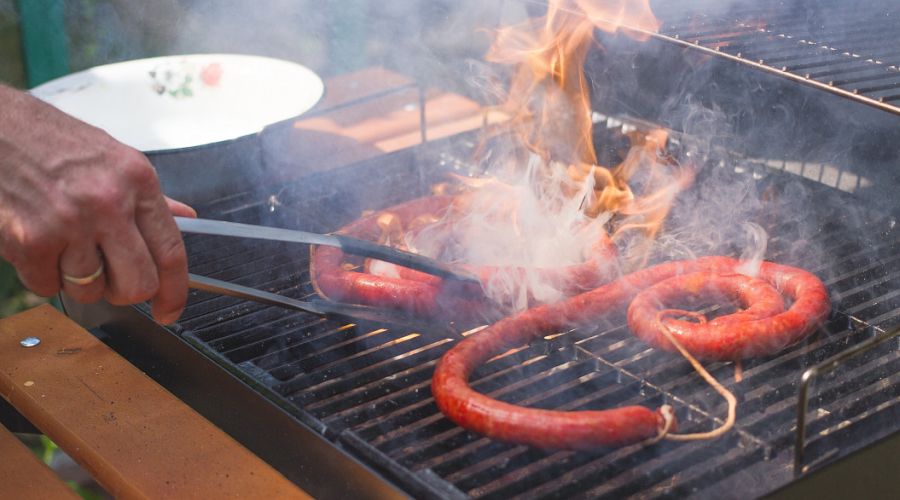 Nothing can be more irresistible than the aroma of grilled sausages wafting through the air. With such a wide variety of sausages from which to choose, these meats create great entrees for the summer BBQ season. Many grilling chefs avoid sausages due to grill flare-ups. There are ways to avoid this.

Why Sausages on the Grill Cause Flare-Ups

It’s important to grill sausages over a grill with a lower temperature. For charcoal grills, put sausages on the grill after other grilled meats or veggies when the heat of briquettes has waned. With a gas or electric grill, grill over a medium flame.

Pork should always be thoroughly cooked. This includes pork sausages. Marinating pork sausages overnight will partially cook them and hasten the time needed on the grill.

Experiment with different types of marinades to enhance the flavor of pork sausages. For example, a marinade of olive oil, balsamic vinegar, finely chopped garlic and a few fresh basil leaves will infuse the sausages with a Mediterranean flavor. Couple with the smoky grilling, the result is unforgettable. When using oil in marinades, allow the sausages to rest on paper towels to absorb excess oil and avoid grill flare-ups.

For grilling in a hurry, pork sausages can be pre-steamed in a large sauté pan. Simply place a cover over the pan and cook until sausages begin to turn color. Cook over low heat. When partially cooked, remove to grill. Most of the natural fat will be removed and grilling pork sausages with this method avoids flare-ups.

Another tip is to place sausages in a slow cooker on low for approximately two hours. Add barbecue sauce for extra flavor. When sausages appear slightly cooked, remove to the grill over a medium fire until done.

Another hint for grilling sausages without flare-ups is to place the ungrilled sausages in a large bowl or pan. Add in one cup of apple cider vinegar, one cup of water, and one teaspoon of salt. Gently pierce each sausage three or four times with a clean needle that has been sterilized in boiling water. The acidity of the salty liquid will draw most of the natural fat from the sausage meat. Avoid using the tines of a fork to pierce the casings. The larger size of the tines causes sausages to split open on the grill.

Brats are usually pre-cooked. These grill quickly and without flare-ups. However, it’s a good idea to use a metal grilling tray to prevent brats and poultry sausages from sticking directly to the grill. Turkey and chicken sausages tend to dry given their low level of natural fat. Some grilling chefs prefer to line the grill with aluminum foil to avoid drying. Brats, chicken, and turkey sausages can also be marinated before grilling. Try marinating brats in beer, lemon juice, and finely chopped garlic. Chicken and turkey sausages do well in a marinade of white wine, fresh thyme or rosemary finely chopped, and a dash of Worcestershire sauce.

Know Your Fire and Your Grill to Avoid Flare-Ups

The best tip to avoid flare-ups when grilling any type of sausage is to use the correct temperature for the specific type of meat. Electric and gas grills always grill faster. The advantage of these grills is the automatic temperature settings. There is a slight loss in the smoky essence that only charcoal can infuse in grilled foods. To add this smoky flavor, consider purchasing mesquite chips. Moisten mesquite chips before adding to gas or electric grills.

How to Use Wood Chips on a Gas or Charcoal Grill

How to Make a Grill Out of a 55-Gallon Drum

9 Tips for Safety When Using a Gas Grill

These are the Best Smokers for your BBQ needs