How to Grow Cucumbers: The Complete Guide for Backyard Gardeners - Backyard Boss Skip to content
We are reader supported. External links may earn us a commission. 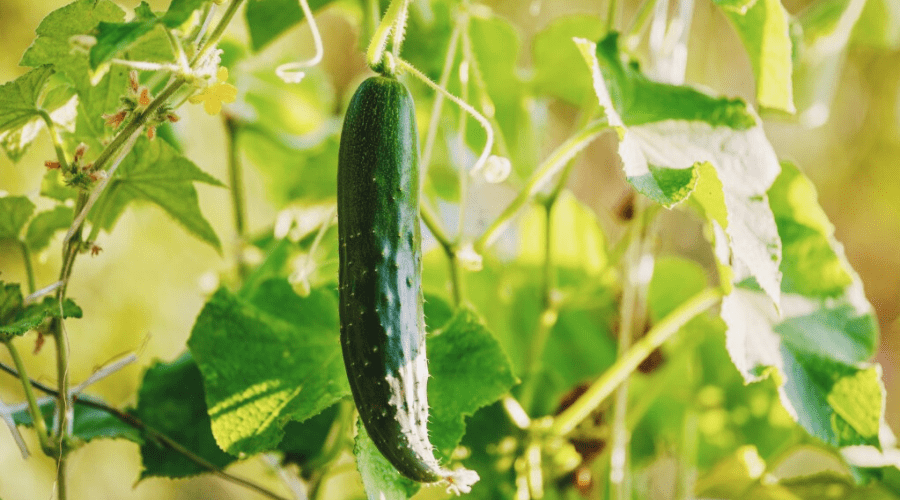 There is absolutely nothing like a crisp, hydrating cucumber on a hot summer day. Nothing like it except for a crisp, hydrating cucumber that you grew in your own garden. Cucumbers are an extremely easy vegetable to care for that grow rapidly in size, outpacing most other vegetables. They not only are delicious, their vines are a gorgeous, welcomed addition to any garden. This guide will explain how to grow cucumbers in your own garden, explaining how to plant, care for, and harvest them.

What You Will Need

How Do Cucumbers Grow Best? 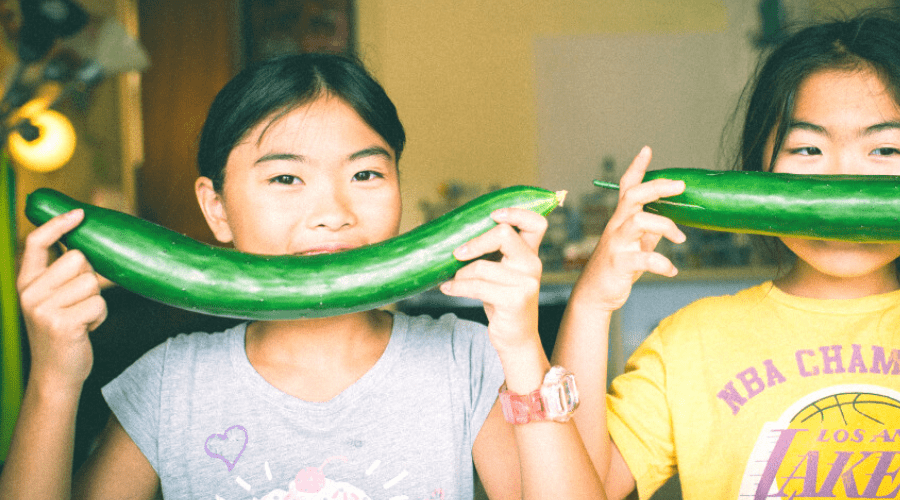 Cucumbers are a tropical vegetable that loves warm, humid weather in spots that get lots of sunlight. They especially thrive in loose soil filled with organic matter. Cucumbers also absolutely adore water, which makes sense considering they are 96% water.

Are Cucumbers Easy to Grow?

Cucumbers are one of the easiest vegetables to grow. They grow quickly and require little care other than constant watering and monitoring their trellis growth. They can grow in most zones in the United States but especially thrive in southern regions.

Can You Grow Cucumbers from a Cucumber?

First of all, do not collect seeds from hybrid cucumbers because they are frequently sterile. Be picky about which cucumber seeds you do use, choosing healthy ones from tasty plants. Cucumbers are left open to cross-pollination so the cucumber seeds you collect will likely create a weird mix of cucumber crosses. Choose seeds that are more protected against cross-pollination to ensure a healthier crop.

Harvest the seeds once the fruit is past mature, allowing it to stay on the vine until it turns orange or yellow. Once you have harvested the seeds, soak them in warm water for a few days to get the pulp off them, stirring every day. Separate the viable seeds from the bad ones and pulp after three days. Then, lay them on a cloth to dry. As soon as their exterior is dry, place them in an airtight container.

Place them in the freezer for two days to rid them of any pests that survived the three-day-long-warm-bath. Then store them in their container in a  cool dry place until the next growing season.

There are two types of cucumbers that you can grow: bush or vine. They have very different growing styles, but both produce delicious cucumbers.

Bush cucumber plants are one of the easiest vegetables to grow in containers.

They are more compact than vine cucumbers but easier to manage. You can increase your yield of them by successively planting several crops every couple of weeks.

How Do You Grow Cucumbers in Containers? 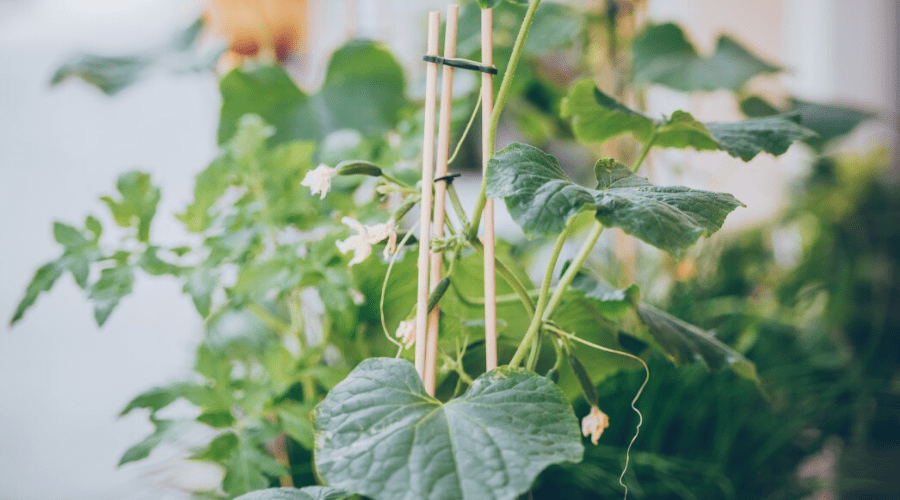 It’s extremely easy to grow compact bush varieties in containers. Some excellent bush varieties to grow in pots include Picklebush, Diva, Lemon Cucumber, Salad, and Hybrid. It’s best to start container cucumbers outside in late May. Pick out a container that is large, at least 12 inches across and 9 inches deep with numerous drainage holes. Keep in mind: the bigger the pot the more water it will retain.

The container should be in a sunny area that gets at least 6-8 hours of sunlight a day. Don’t plant your cucumbers until soil temperature exceeds 70 F.

Mix potting soil, compost, peat moss, and perlite in the container. Add a spike or trellis in the middle of the pot when the cucumber is young. Tie its vines to the stake or trellis as it grows. Make sure that your cucumber plants get plenty of water. The soil should have a consistent moisture level throughout their growth but should never be wet. Stick your finger in the soil up to your second knuckle. If it’s moist at your fingertip then don’t water. 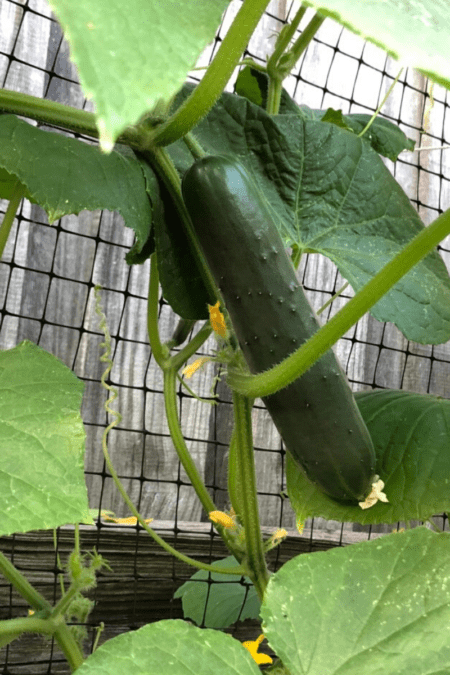 Vine cucumber plants grow in a sprawling manner. They are great for large gardens or for vertical growth.

Yes, cucumbers will climb trellises and other support structures. They require some guidance on your part but if you place their vines near the structure they should wrap around it.

Do Cucumbers Need a Trellis?

If you have a smaller garden then you should try to vertically grow your cucumbers on a trellis because otherwise, they will sprawl out overtaking the space. It doesn’t have to be a trellis though, it could be a different type of support structure like a fence or poles.

Growing them vertically has the benefits of looking aesthetically-pleasing, lifting their fruit of the ground, making watering and pest control easier, and reducing the chances of soil-borne diseases infecting your cucumbers.

How Tall Should a Cucumber Trellis Be?

The perfect trellis height is really going to depend on which kind of cucumber you are growing. Different types will grow to different heights, so research your cucumber variety before investing in a trellis.

You should also take into account your height when building a trellis. Building one that is much taller than you will make caring for your cucumbers much more difficult.

That being said, the average trellis height that cucumber varieties can be trained to grow up is 5 to 6 feet tall.

How Long Does it Take to Grow a Cucumber?

Do Cucumbers Come Back Every Year?

No, sadly cucumbers are annuals so they only grow for one season. You will have to plant them all over again next year!

How Many Cucumbers Does One Plant Produce?

Cucumber plants will normally produce about 5 pounds of cucumbers on average. This normally amounts to about 10 cucumbers all weighing in around 6 ounces.

How to Grow Cucumbers

Step One: Build Your Trellis 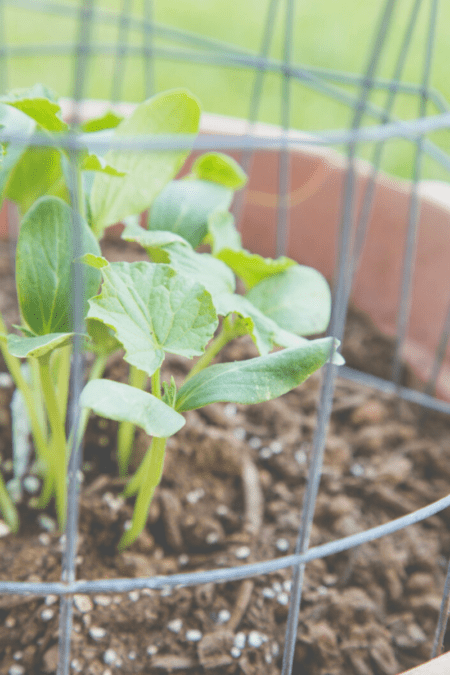 If you are planning on growing cucumbers it’s likely you will need to use a trellis or a similar support structure. Consider making a welding wire fence or using hog wire because it’s easy for tendrils to snag onto and grow up. You can also use a mesh fence, garden netting, or posts to support your cucumbers.

Your trellis should be around 5 feet tall, but that height may vary depending on which cucumber variety you are growing. The lower edge of the supports should be at least 6 inches above the soil.

The soil under the trellis should be tilled at least 8 inches deep.  Mound the soil up along the trellis line with a garden rake so it is 2 to 3 inches above the soil level.

Cucumbers are such an easy plant to grow you can even directly sow cucumber seeds into your garden, skipping the tedious step of seed starting. When you plant the seeds the soil should be at least 70 F with a pH between 6.0 to 6.8. Make sure the soil is loose and has adequate drainage, removing rocks and sticks from it before you plant. It’s also a good idea to mix some compost into it.

Plant the cucumber seeds 1 inch deep in the raised bed 12 inches apart. Pro Tip: If you are having late chilly weather but are eager to plant your seeds you can warm the soil by covering it with black plastic.

Step Three: Care For Your Cucumbers

Add organic fertilizer like manure to the soil to give the plants necessary nutrients. Thin out cucumbers that grow too close together.

Water the soil with an inch of water each week. If you don’t consistently water your cucumbers will suffer. Try to keep the leaf foliage dry when you water to prevent leaf diseases. You can mulch around your plants to help the soil retain moisture. 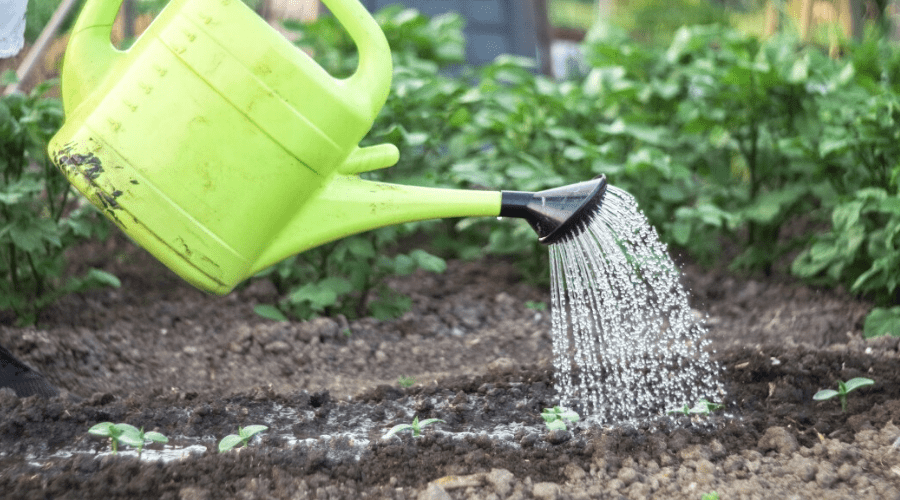 Help your cucumber vines grow by guiding their vines to the trellis or other support system.

If you guide them to it they should wrap around it. If they need more help, gently tie them with cloth rags to it, leaving an inch of space between the trellis and vine.

If the strips start to constrict the vines, remove them. Keep in mind that using string or wire ties to bind the cucumbers can lead to them being killed. 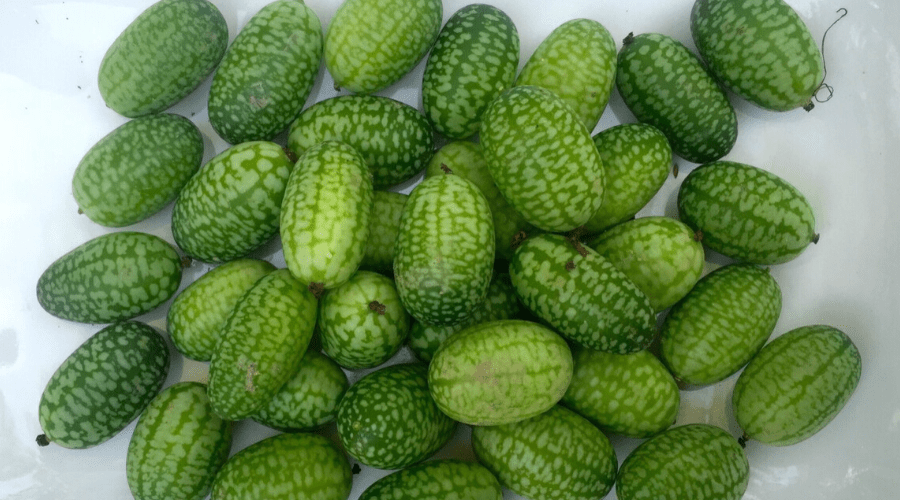 Pick your cucumbers whenever they seem big enough to use.

Check your plant daily once the fruit starts to grow because it grows very quickly. The more you harvest, the more cucumbers that will grow. If you let the cucumbers grow to be oversized they will taste bitter. If they yellow at the bottom that means they are overripe.

To harvest, do not pull the fruit off but rather use clippers or a knife to cut the stem above the cucumber. Pulling cucumbers off can damage the vine.

You can store harvested cucumbers in the fridge for a little more than a week, but they will taste best closest to when they were picked. 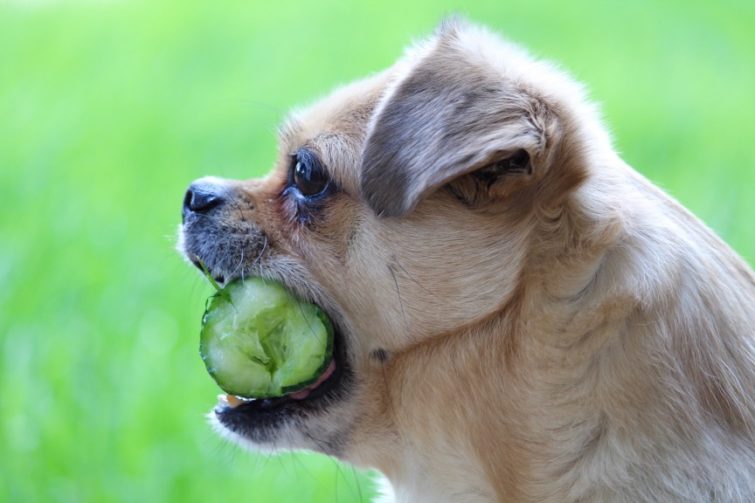 Being able to grow cucumber is as cool as, well, a cucumber. Cucumbers are an awesome crop to grow in your backyard because they are so easy to care for, attracting advanced gardeners and beginner gardeners alike. They are an adaptable veggie that can be worked into numerous recipes, and they are also healthy to eat, being nutrient-rich, hydrating, and containing numerous antioxidants.

If you enjoyed this tutorial or found it remotely helpful, be sure to share it and comment with your growing questions below!

61shares
Scroll back to top
61shares