How to Make the Best Snowman Your Neighbors Have Ever Seen - Backyard Boss Skip to content
We are reader supported. External links may earn us a commission. 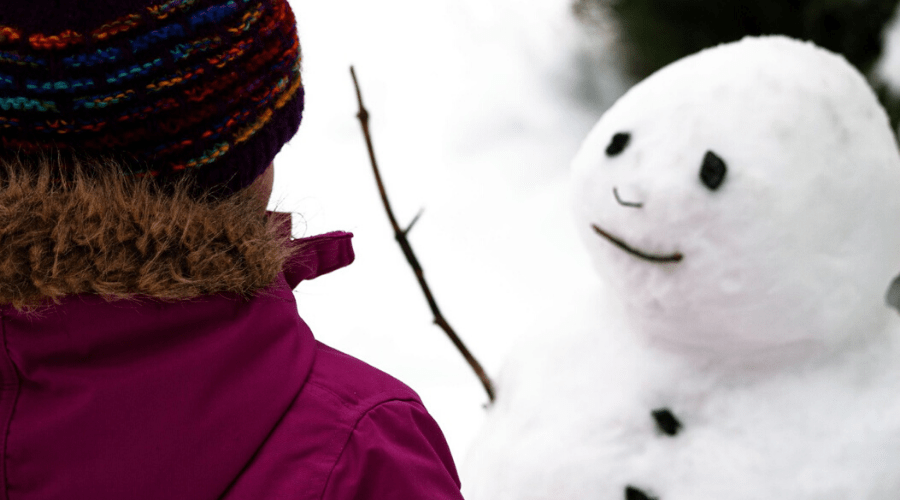 Who doesn’t love building a good snowman? This classic activity is famous around the holidays for colder climate dwellers worldwide, and it certainly makes sense why. It’s fun, it’s easy, and it’s a great way to enjoy the outdoors even when the cold is bitter, and the snow is plentiful. Snowmen have wiggled their way into popular culture as well, a staple image in Christmas and wintertime decorations and the iconic main character of the beloved holiday song (and film, and TV show) Frosty the Snowman.

Perhaps you have a little one that you would like to teach how to build a snowman, but you’re a bit rusty. Maybe you want to make a professional-looking, eye-catching snowman for your front lawn. Whatever your reasoning, we’ve put together a useful, brief how-to guide on everything you need to know about making the perfect snowman.

There are many different snowman ideas out there, but it helps to have a solid understanding of how to make the foundation of a snowman correctly. Check out our handy guide to creating a snowman below!

The History of the Snowman

Not much is known about the earliest snowmen’s documentation, though we have artistic depictions of what appears to be person-like snow statues dating back to medieval times. The earliest known photograph that we have of snowman can be dated at around 1853 in Wales, though woodcuts and snowmen’s depictions can be dated back to the 1300s around Europe.

Believe it or not, the snowman has some surprising political history. Other than serving some aesthetic and entertainment purposes, snowpeople have also been used for political protest. In 1511, Brussels’ inhabitants were struggling with poverty, starvation, and the notoriously long and fatal “Winter of Death.” The government decided to launch a snowman festival to lift spirits, which worked—mainly because the citizens used to create caricatures and effigies of prominent citizens and politicians in the city as a form of protest.

Today, snowmen are made for fun by children and adults alike. Some people will take snowmen a bit more seriously, opting for contests to build the biggest and best snowmen possible. The world record for the globe’s biggest snowman was set in 2008 by Maine resident Robin Zinchuk, who made a massive 122 foot-tall, 13 million-pound snow woman—which is just a few feet shy of the Statue of Liberty.

How to Make a Snowman, Step by Step

To begin making a snowman, you’ll need a few supplies. These include:

Making a basic snowman is relatively easy. Follow these steps:

Find wet snow to build your snowman. Your snow should be moist and packable—not too sopping wet, but not too fluffy either. When you begin gathering the snow to pack into balls, you’ll notice right away if the snow isn’t sticking together properly. If this happens, try to find a better spot with the right kind of snow. 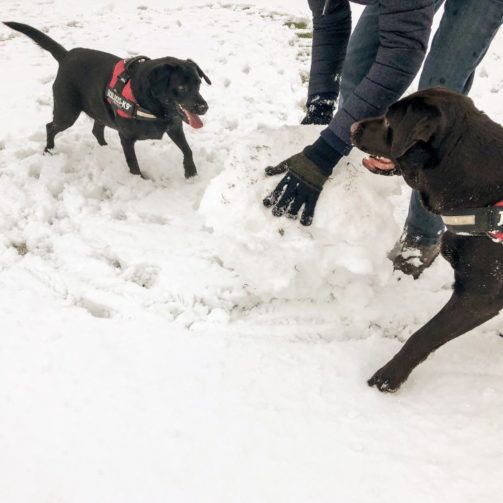 Find a reasonably flat area of lawn or concrete. Building your snowman on a slope could result in it falling over. You can build your snowman on concrete, but the grass is preferred because cement and asphalt can store more heat and cause your snowman to melt faster. Ensure that the spot you choose has plenty of snow for you to use.

Start with the bottom section. Make sure you’re wearing appropriate gloves to keep your hands warm and protected from the cold snow. Pack a snowball in your hands and pack it into a ball-like round shape. Continue to add snow to the ball with your hands until it is approximately 12 inches or so in diameter. Once the ball is too heavy to comfortably pack in your hands, move on to the next step.

Roll the ball around the ground to pack more snow onto the bottom section. This step is pretty self-explanatory! Make sure you change the directions of where you roll the snowball so that you’re creating a round ball, not a cylinder. Continue to do this until your snowman is about three feet in width. You can go bigger if you want, as well. When your bottom section reaches the right width, stop rolling it in the exact spot where you want your snowman to be. 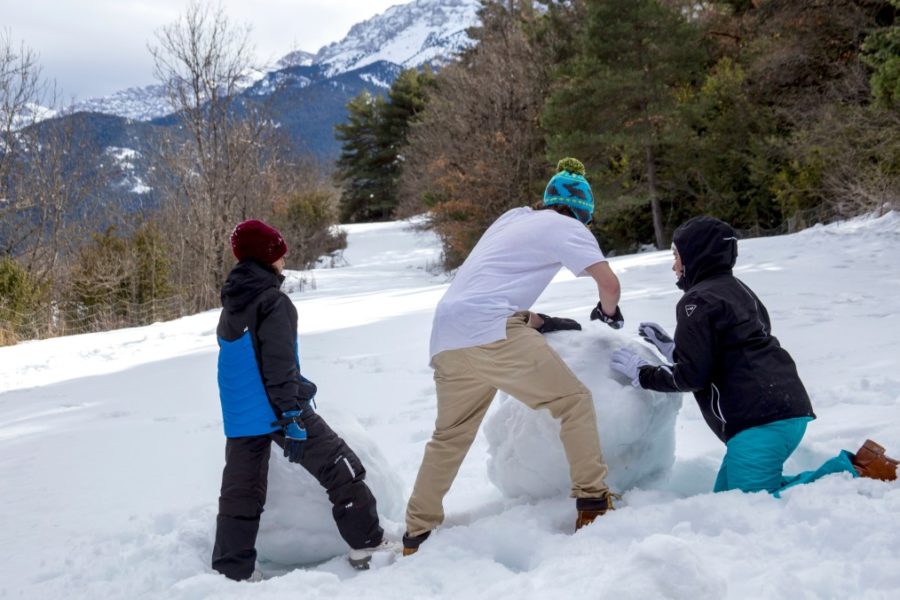 Start making the middle ball section. As we did earlier with the bottom section, scoop up some snow in your hands and begin packing it into a very tight ball until the snowball is too difficult or heavy to hold. Then, start rolling it on the ground. When the ball is about two feet in width, stop rolling it. Try to stop rolling when this section is on the ground next to the bottom section.

Pick up the middle section and set it onto the bottom section. You might need help with this part, depending on how strong you are. Always lift with your legs, not your back. Lift the ball and gently place it into the center of the bottom section.

Create a one-foot ball for the head. Once again, scoop up some snow and pack it with your hands until it is perfectly round and about one foot in width. You probably won’t have to roll this section. When you are finished, place it on top of the middle section.

Pack snow in the gaps. Take a little bit of snow and pack it around the “seams” where each ball attaches to the next. Think of this as a kind of spackle that will keep the different sections from falling off. It will also give your snowman a uniform, clean look. 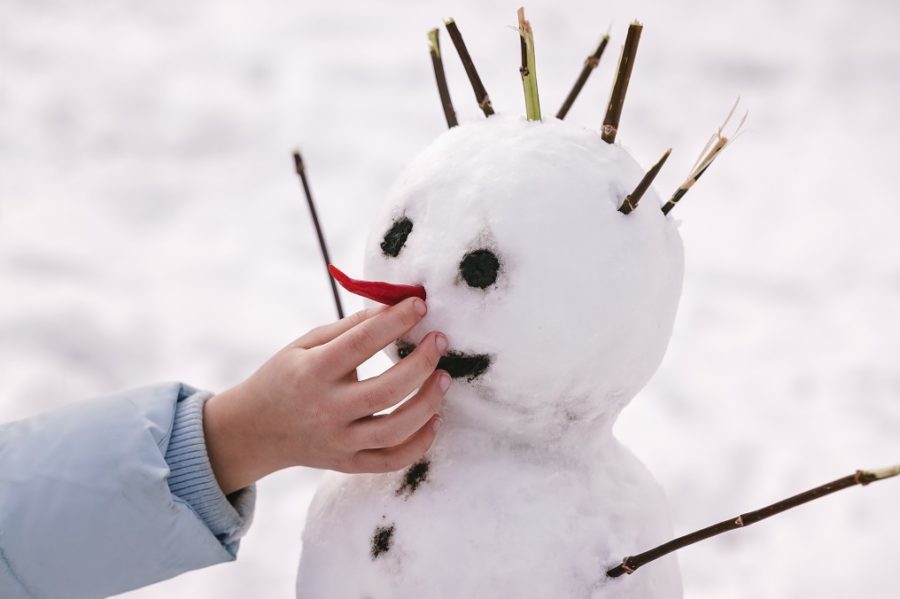 Start decorating. This is the fun part! Using the supplies we mentioned above, start decorating your snowman. A traditional snowman will boast a carrot or icicle nose, buttons or charcoal for eyes, and small bits of pebbles or charcoal to create a smiling mouth. Buttons can be placed in the middle section for a more traditional look as well. You can also use things like ping pong balls, gems, rubber tubing, felt, etc. It’s all about being creative!

Insert sticks into the sides of the snowman’s middle section. These will be your arms. Try to find twigs that are a couple of feet long and relatively light. You can also get creative with old broomsticks or golf clubs.

Add clothing. You can go the traditional route with a nice cap and a scarf. You can use whatever you want, even your old clothes, to make a mini snowman version of yourself!

Tips and Tricks for Building Snowmen

When rolling the bottom section of your snowman, try moving it around in a spiral shape on the ground to make sure the ball has even snow coverage and comes out as round as possible. You don’t want an oblong snowman! 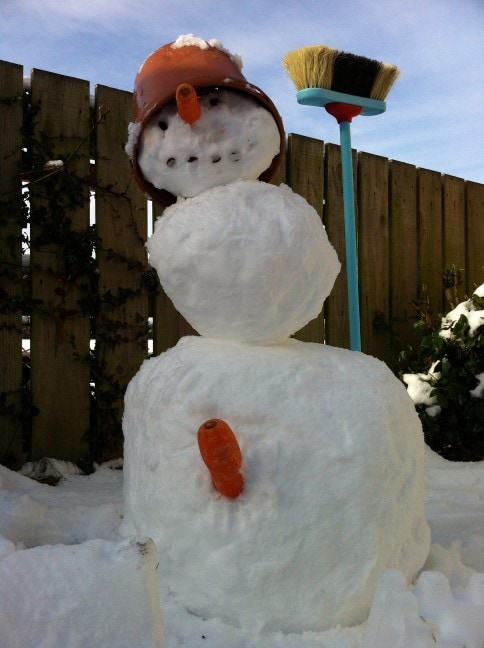 Try to pat your three balls of snow as you roll and shape them with your hands to keep snow from falling off in chunks. It’s all about packing it appropriately.

When you’re ready to lift your middle section onto the bottom section, it helps to slightly flatten the top of the bottom ball so that the central ball can rest securely on top of it.

Make sure the decorations you choose are lightweight and won’t cause the snowman to topple over.

The Best Type of Snow to Use for a Snowman

Always use damp, thick snow. Snow can be soggy and half-melted or overly powdery—neither of these is ideal for making a snowman. Typically, the right kind of snow is a few inches underneath layers of fresh powdery snow.

How Big to Make a Snowman

You can make your snowman according to the size guideline we followed in the step-by-step guide, or any size you want! If you want to make a bigger snowman that doesn’t follow the three-foot, two-foot, one-foot formula we outlined in the step-by-step guide, follow a ratio of 3:2:1. For example, a larger snowman could have a bottom section that is four and a half feet wide, a middle section that is three feet wide, and a head that is one and a half feet wide.

How to Make Your Snowman Last Longer

The best way to make your snowman last longer is to build it away from direct sunlight. While your snowman probably won’t last forever (unless you live somewhere cold and snowy year-round), you can prolong its life by keeping it in the shade by a tree or tall building. 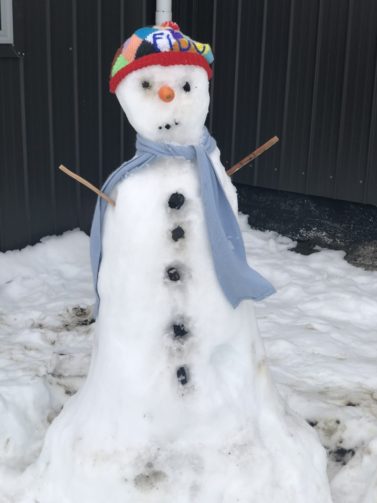 Some people will even make icehouses, or extensive snow-based cellars, to keep their snowman cold. This can take a lot of work, and eventually, that ice cellar will begin to melt as well. If you’re particularly crafty, you can build your snowman out of pykrete. Pykrete is a type of cold alloy made with about 86% ice and about 14% sawdust or another kind of wood pulp. This material was developed during World War II to be a material in constructing aircraft carriers for the British Royal Navy. It is very slow to melt and has a very low thermal conductivity, so it could make your snowman last for quite a long time. Pykrete is often compared to concrete!

Basic insulation can also prolong your snowman’s life. By putting clothing on your snowman, such as a shirt or coat, you’re insulating the snow’s cold and keeping it from melting.

How was our guide to making the perfect snowman? Tell us how your first snowman building session went in the comments below!