Four years ago I planted a little grapevine because one day, and that’s a big one day, I want to try my hand at homemade wine. Last summer my vine was finally large enough and had the proper growth to support my first harvest. Despite the seeds, we spent the late summer picking off grapes to judge the sweetness of the grapes and determining when they were fully ripe.

While visiting a small winery in rural Arkansas, I took advantage of having the owner full attention during a wine tasting and picked his brain over vine care and wine production- and I learned that if I want a good harvest, it is crucial to keep your vine pruned. This step by step guide provides you with the basics of understanding how to prune your grapevine, and why you should do so. I am no expert by any means, but the following information is useful to begin to understand how your grapevine grows- and how you can influence healthy growth.

Why You Should Prune Your Grapevine 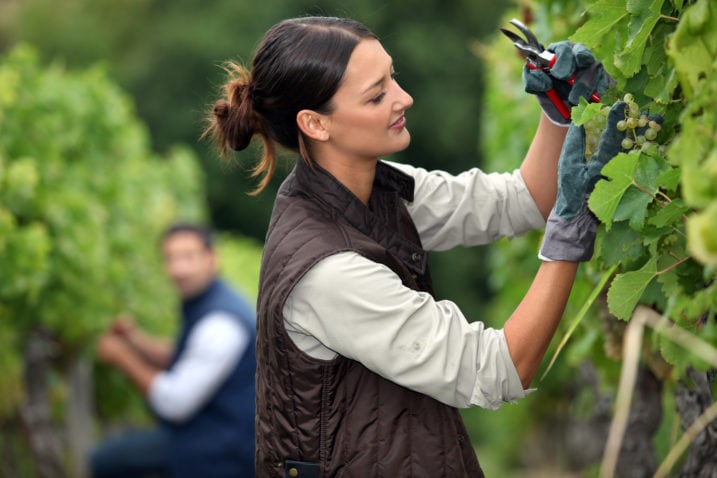 Grapes only grow from the vines sprouting from one-year-old shoots (or canes- the terminology depends on who you are talking to, but the meaning is the same). Left alone, your vine will continue to produce new shoots and grapes, but the energy that goes into grape production will be spread throughout the vine and yield low harvest and poor results.

If you want your grape vine to produce as much as possible, then you should follow a few simple rules each dormant season. This is the same no matter what kind of grape you are growing. There are a few different ways to prune your vine, as I will explain below, but each has the same purpose: to support a healthy, productive vine.

When to Prune Your Grapevine

Grapes go dormant in late fall and are generally slower to burst into bud the following spring, but once they start growing they are usually very vigorous. Vines are safe to prune anytime after they have gone dormant and before they break bud, but depending on where you live you may want to wait until late winter to forge ahead with your cutting plans. This helps avoid any winter kill of newly pruned vines and also lowers the susceptibility of airborne diseases which can often stir in more warm climates.

I live in Southeastern New Mexico, and although we do have a true winter, it is fairly mild overall and so I have to make sure I do not wait too long to prune or I may find some early buds in bloom. This pruning was done on the first weekend of February, and already the daytime temperatures were creeping into the lower 70’s despite the below freezing temperatures at night.

You can see the well-formed buds on this cane and how green the one at the base looks. The buds closer to the cordon will break first and are most likely to be susceptible to damage. Always consider this when deciding how many buds to leave. You can always trim it up later when the threat of frost has passed. 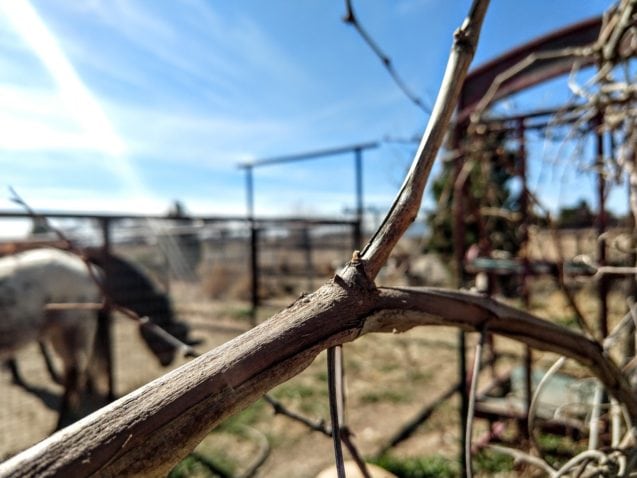 How to Prune Your Grapevine

Because of the young age of my vine, and the fact it has only had one productive season so far, it was easy to determine which vines were best left and which needed removal. Last summer was the first real burst of vegetative growth, and it surprised me how large a vine can grow- so my main focus was training it along the guide wires and onto an old wine rack I had incorporated into the support.

This is basically what it looked like when I got started. As you can see it is rather unruly and growing up and over everything: 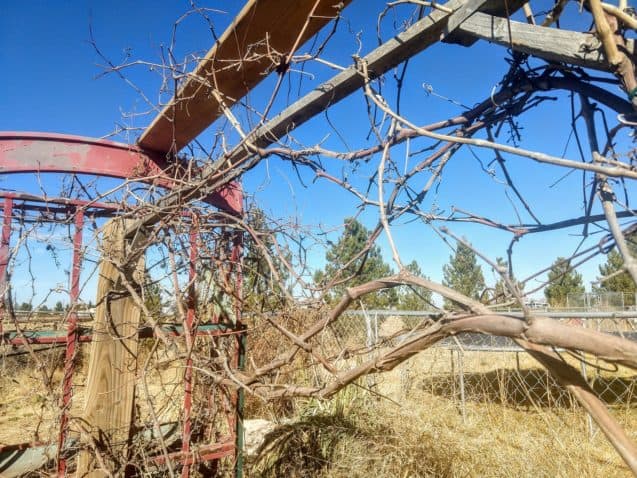 The fall weather brought some severe storms, one of which skipped a tornado through my yard and took out the top of my grape arbor and forcing me to rig up a new support system. The strength of the young vines kept the entire arbor intact through the storm, and I was able to wire up the arbor to keep from compromising the vine with a newly built arbor. This year’s pruning, of which I am about to speak about, is focused on growing the vine even stronger, all while allowing enough new growth to produce an abundance of grapes for winemaking.

It is important to understand some terminology concerning grape pruning before getting started, as well as the different techniques so you can determine which approach to take for the needs of your vine. 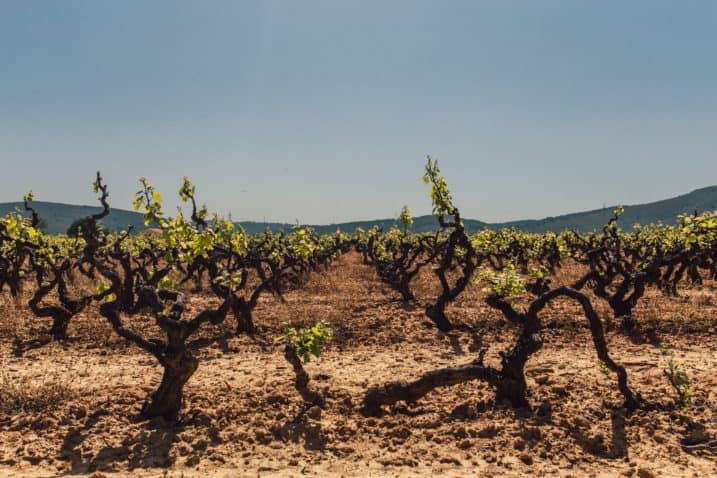 The trunk of the vine is the thickened part directly above the ground from which the rest of the vine grows. You most likely will get suckers from the bottom of the trunk, which you should remove unless you are looking to have them replace the trunk as a new one.

Mature shoots after their first growing season. These shoots will produce the buds that will turn into producing vines. Occasionally you may find you have a ‘bull cane’- a thick, vigorous cane growth that may be oval in shape. These are generally not very productive and should not be considered for retention (and in fact make wonderful options for making your own grapevine wreath!).

These are semi-permanent ‘arms’ of the vine from which new cans and shoots will grow. I am currently working on building the structure of my cordons as my vine grows.

Shoots are the name given to the new growth in a new growing season. This bear fruit if grown from a cane, or can become a new cane or even trained as a cordon in young vines.

These are short, stubby canes that have a few buds that will develop into new shoots. You create spurs through the spur pruning technique I will explain below. 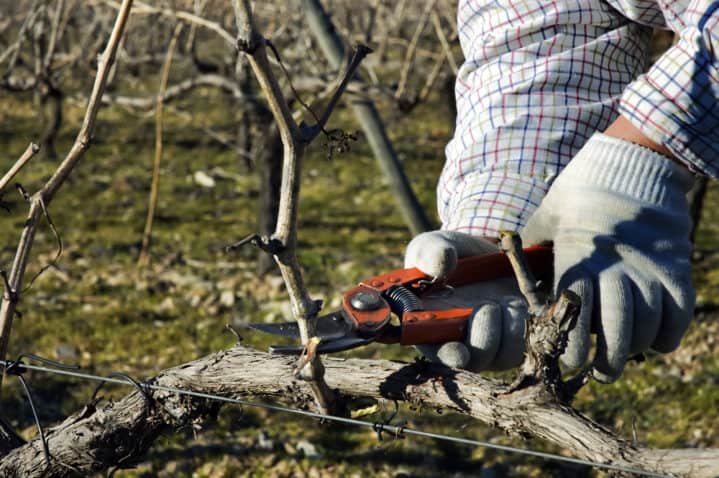 Cane pruning is the process of choosing 2 to 4 canes from each cordon and cutting them back to approximately 15 buds per cane. All other canes are removed. Younger vines often benefit from this technique and may be used to help establish strong cordons and future spur pruning techniques. I used a combination of this and cane pruning explained below.

To spur prune, you will prune along each main cordon, and cut back your canes to leave two to three buds on each newly created ‘spur’. These should be separated by four to six inches of space along the cordon. All other canes should be removed. This is a popular technique to apply to well-established vines.

This video provides an excellent look at the parts of the vine as well as how the spur pruning technique is applied:

A good, sharp pair of handheld pruning shears and some gloves, if you prefer them, are all you need. I also brought out some wire to gently help support my vine due to the damage that had occurred to the trellis last year, and to tie together my pruned material to use for a wreath later on.

To begin, always start by cutting out any suckers that may have formed the previous season, and remove any dead, broken, or diseased canes. Carefully cut these out completely and unravels from the rest of the vine.

Although I have a strong central trunk, you can see the many suckers along the trunk that were allowed to grow. I did cut off all the previous years growth, but did allow the one larger vine to stay as it has become the main cordon for my vine: 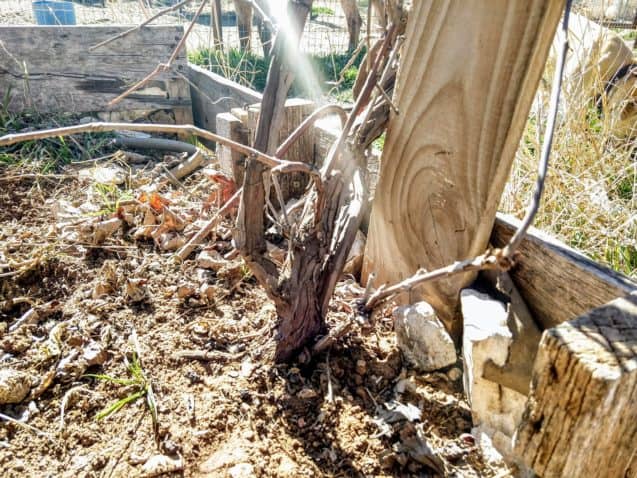 Also, separate any vines that have grown into one another from neighboring plants. Many people plant more than one vine and use the same guide wires. By keeping these separate prior to pruning you can know which cut belongs to which plant. To do this, simply cut each reaching vine back to the cordon of the plant it belongs to.

Depending on the age of your vine, you should choose which technique you want to apply. What results you are looking for also should be taken into consideration. Following the descriptions above to decide on the overall results. For my vine a chose to spur prune closer to the trunk along with my strongest cordon, but cane pruned along the canes I would like to influence as new cordons due to the shape of my arbor.

You can easily see the bud on the base of this spur I cut off my original cordon. This will burst into a new shoot that I will support with additional guide wires this summer once the new growth takes off. 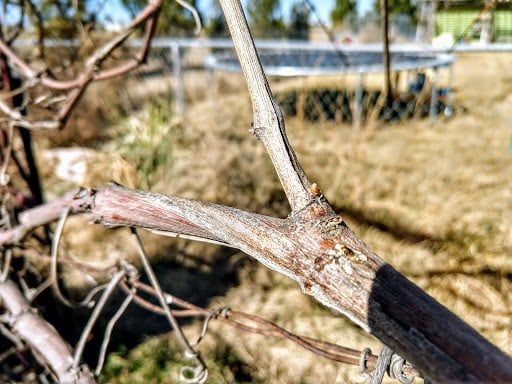 Step 3: Cut Your Canes Back

Once you have decided which canes to cut, I suggest working your way from the trunk outwards to avoid missing any canes and keeping consistent spacing. You can always go back over to remove excess buds you may feel you have, but you cannot add them back on if you feel you pruned too heavily.

Once you have established your cane and/or spurs, remove all the rest of the canes to help focus new growth into the bus you have chosen to grow into new shoots. This will allow the energy of growth to concentrate on production rather than spreading it throughout a larger vine system which can influence less vigorous fruition and even a weaker taste in those fruits that are established.

And don’t forget to keep those grapevines to use in a wreath!

As you can see, my vine looks much more simplified with some obvious spurs along the upper canes that were the new growth last year. These canes should become strong cordons in time that I can use to influence new shoots to cascade over the old wine rack that serves as a potting table in my garden (seen along the left). 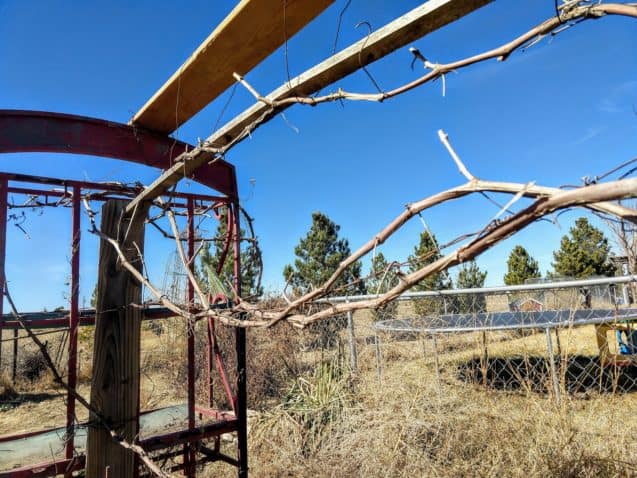 There are many ways you can grow your vine. Some people choose to grow over an arbor, while others take a more traditional approach and grow along guide wires either in a T-like shape or an inverted ‘L’. My small garden space and watering challenges in a desert climate challenged me to take a slightly different approach as my vine grows from a raised bed- and I choose to create tiers of cordons to grow upwards and across to take better advantage of my water source. This does require me to use a step stool, and also pay attention to proper support.

Although your vine can be trained along the guide wire to provide stable support (remember mine survived a tornado intact even when the support did not), do not be afraid to gently wire up or lift your vine to train it where you feel it would best grow. Always revisit this support when you prune to either remove, add, or tighten as needed.

Despite my non-traditional growth method, pruning approaches to a healthy grapevine all consist of the same thing: creating a healthy vine for new vigorous shoots and fruit production. I am very much the newbie at this myself, and the above information was extremely helpful when learning about the parts of the vine and how they grew.

A mistake many people make is not cutting enough, or neglecting to cut at all- and since grapevines are fairly forgiving overall, do not be afraid to begin applying the above-mentioned techniques. As long as you leave buds behind you will have new shoots to continue to learn from the following year. You also will most likely always have new suckers as well, which can become a new trunk if you feel you have become too enthusiastic in your pruning techniques- or if your vine suffered irreparable damage.

Please tell us about what works for your grapevine pruning and include your location as different climates can influence different approaches. And, as always, please share!

How to Grow Carrots: The Ultimate Guide

How to Plant a Butterfly Garden

Scroll back to top
26shares