How To Identify and Prevent Root Rot - Backyard Boss Skip to content
We are reader supported. External links may earn us a commission. 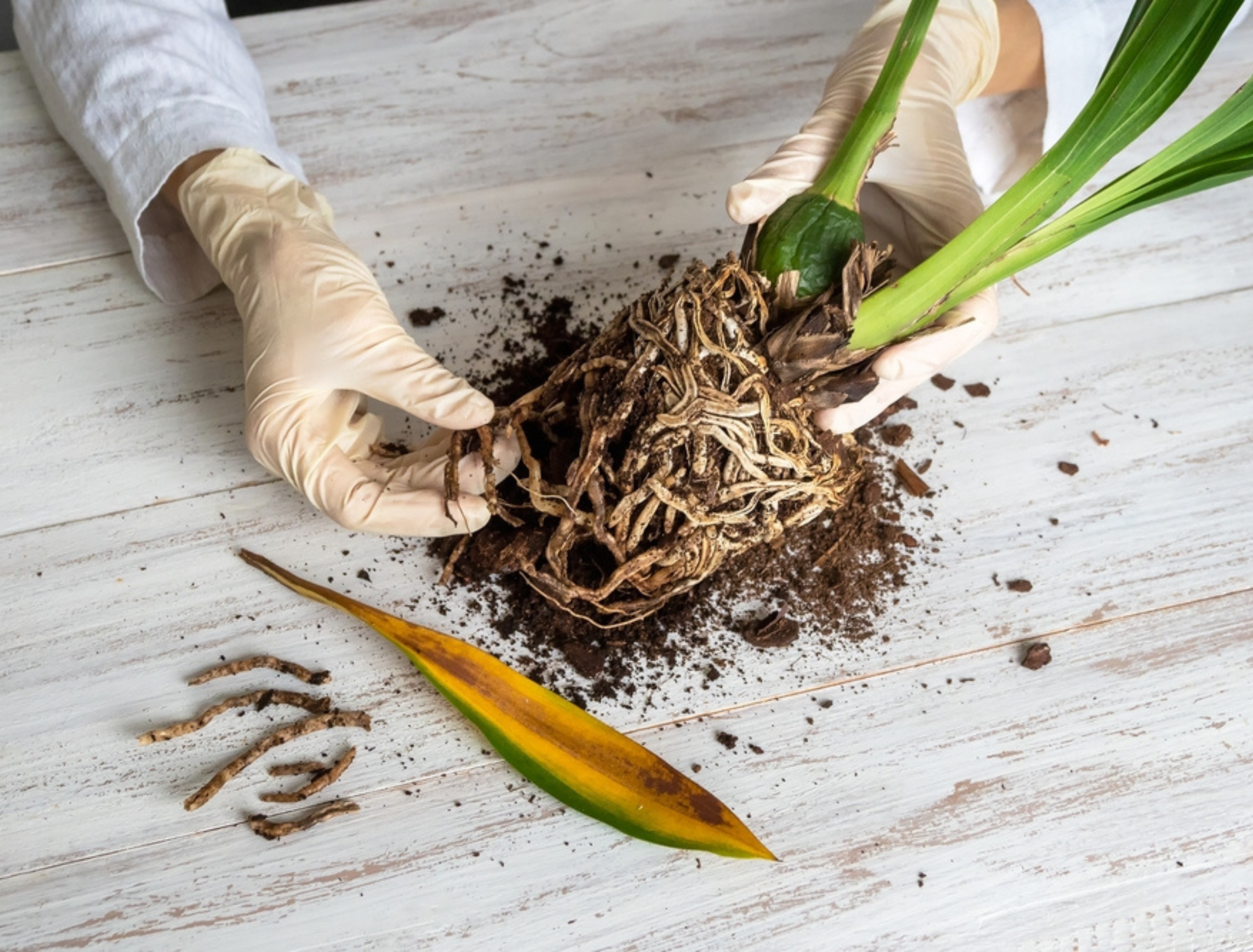 Root rot is an invasive disease caused by various fungi and oomycetes that attack a plant’s roots. Unfortunately, there is a high chance your plants will encounter this disease because root rot is a soil-borne pathogen that thrives in excess moisture and poor soil drainage. If you notice that your plant’s leaves are turning yellow or there’s stunted growth, your plant is, most likely, suffering from root rot. Leaving your plant unattended, will unfortunately kill it.

Thankfully root rot is easy to fix. With proper management and treatment of your soil, you can stifle the chance of root rot attacking your plants. Learn below the types of root rot and how you can identify and fix them so they don’t return to haunt your plants.

Types of Root Rot and How to Identify Them

This fungus attacks a variety of deciduous and evergreen trees and shrubs. It sustains itself as strands of fungal growths, similar to a black shoestring in wood debris, such as an old tree stump or a plant’s root system. When a healthy plant grows close to the infected debris, it is likely to fall ill.

Immediately after infection, the fungus overtakes the plant’s root system, which begins to decay from within. Plants will vary in how long they take to show symptoms. Although, you can spot Armillaria as it manifests on trees as white sheets of fungal growth between bark and wood, leaving it stringy and soft.

Overall, once the fungus covers the base of the plant, it is likely to die.

Fusarium is the genus name of a variety of fungal plant pathogens that aren’t only soil borne but can also be airborne. These fungi can live as saprophytes, meaning they live on dead or decaying organic matter, while some varieties can infect immunocompromised animals and humans.

This invasive fungus thrives in warmer temperatures and moist soil; however, in winter, it survives as thick-walled chlamydospores (the resting spores of fungi). When the temperatures warm up in spring, the chlamydospores germinate into an extensive network of spores known as mycelium.

Then they come into contact with a plant’s root tissue and form a cushion through which they invade.

Pythium is a saprophytic oomycete that causes root rot. Oomycetes, also known as water molds that exist as earthy and aquatic organisms. They resemble fungi in their mycelial growth and mode of nutrition.

Pythium develops in highly saturated soil and is most active when the soil’s temperature is between 41 and 59 degrees Fahrenheit. They start infecting seeds three to five days after germinating. This oomycete begins its annual life cycle over the winter as an oospore, growing in cool, moist soil. Eventually it will turn into flagellated zoospores ready to invade your plant!

The flagella on the zoospores help them swim at high speeds to invade the nearest host plant. Zoospores gather around compromised plant tissue like seedlings or lateral roots and produce infection cells that develop into mycelium, spreading throughout the plant’s root tissue.

Rhizoctonia solani is the most aggressive virus, which infects many plant species and lives off decomposing organisms. This fungus can survive temperatures as low as 36 degrees Fahrenheit but attacks severely in warmer and moist conditions.

Unlike Fusarium and Pythium, Rhizoctonia solani lives through the winter as mycelium. As temperatures in the soil warm up, the mycelium grows and makes contact with a plant’s roots. The filaments of the mycelium, known as hyphae, bud along the surface of the plant’s tissue, producing infection cushions.

It creates numerous spots for the disease to develop. Due to the multiple infection points, large portions of infected plant tissue collapse.

The fungus Thielaviopsis basicola causes black root rot, whose symptoms are often confused with other forms of root rot. These symptoms include; nutrient deficiency, stunted growth, and yellowed foliage.

Black root rot presents as black lesions on plant roots that spread from the middle to lateral roots and form cankers. These black spores can spread to the crown and stems, causing tissue death and wilting leaves.

How to Prevent Root Rot

Soil solarization is a chemical-free method for controlling soil-borne pathogens that utilizes radiant energy from the sun’s heat.

The plastic tarp will trap the sun’s energy, allowing the heat to permeate 12 to 18 inches into the soil. The temperature can get as high as 140 degrees Fahrenheit within these conditions, eliminating weeds, nematodes, insects, and soil borne fungal pathogens.

Gypsum is a chemical compound that primarily contains calcium and sulfur. It helps improve the soil’s structure and drainage and works exceptionally well in soils high in sodium.

Gypsum conditions the soil against infection from oomycetes, not because it improves the soil drainage but because of the high concentration of soluble calcium, which obstructs the growth of fungal pathogens.

Some fungicides can cause more harm to your plant then good. This is because they kill fungal bodies that fight against the pathogenic ones.

The Fungicides Resistance Action Committee has classified fungicides into risk levels ranging from one (lowest risk) to three (highest risk), describing the risk of fungi developing resistance against the fungicide’s effectiveness.

Ingredients with the lowest resistance include etridiazole, phosphorus acid salts, and phosphate.

Note: Before applying fungicides, do a plant patch test. After your initial spray, wait 24 hours; if your plant appears fine, continue with the application.

Getting to the Root of the Rot!

Root rot is a soil borne pathogen that most gardeners have to deal with at some point. The secret to saving your plants from premature death is learning to identify the signs and symptoms of root rot. Pay close attention to your soil’s structure and drainage to prevent root rot.

If household items aren’t eliminating root rot, let the sun work its magic, or you can use gypsum to improve your soil’s structure. Finally, consult an expert before using fungicides. And, as always, wear protective gear before handling any chemicals.

How to Butterfly and Grill Cornish Game Hens

Why Your Tomato Plants Are Wilting