21 of the Most Common Backyard Birds - Backyard Boss Skip to content
We are reader supported. External links may earn us a commission. 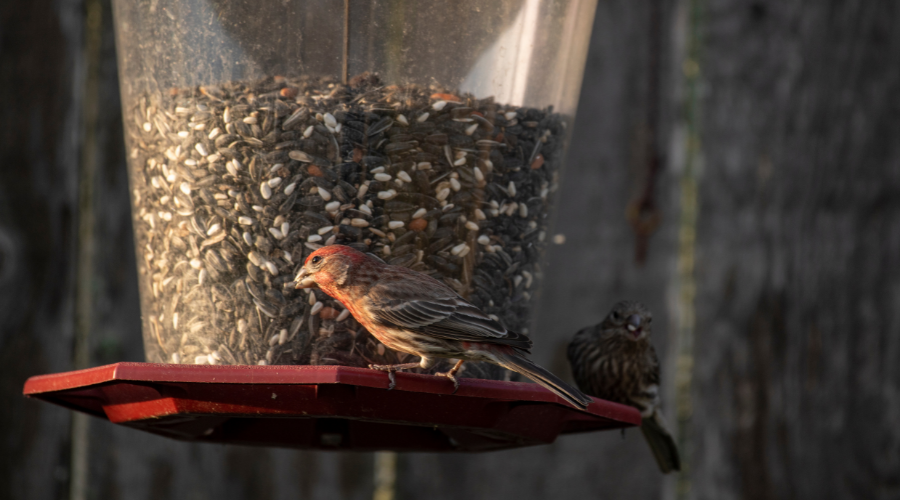 One of the biggest advantages of having a backyard is being closer to nature. It includes having a garden with colorful plants, tall trees, fresh fruits, and tasty vegetables. However, what can really make you feel like you are living in a wild place are birds coming to your backyard.

You can find many species of birds across the United States. To make your life easier, we want to share some of the most common birds you can find in your backyard. Thanks to that, next time the bird appears in your yard, you will know what bird it is.

Northern Cardinals are not only one of the most common but also majestic birds that you can find in your backyard. Males feature bright red feathers, and females have brown feathers with tinges of red. They don’t migrate in winter, meaning you can enjoy them all year long. They feed on sunflower seeds, and you can mostly find them in the east of the country.

Another very popular bird that you can find across the country is a Mourning Dove. You can easily recognize it by its long tapered tail, gray plumage, and spots on its wings. Both males and females look very similar. They prefer living in forests and farms but can also adapt to suburban areas or parks. In the winter, they mostly migrate to Yucatan Penisula or Central America.

House Finches got their name because they enjoy living close to people. They are originally from the Southwest, where the climate is drier, but you can now find them across the whole country. It’s easy to distinguish males from females since males are rosy red around their face and upper breast, while females are plain grayish-brown. They move rather slowly compared to other backyard birds.

What distinguishes a downy woodpecker from other woodpeckers is that it is the smallest species living in North America. Males and females are very similar to each other. The main difference is that males have a small red patch on the back of the head. They can be found all year long throughout the Continental part of the country. However, since they are just 6-7 inches long, it can be difficult to spot them.

Thanks to its vivid yellow feathers and black feathered caps, it is easy to spot a male American Goldfinch in your yard. Females are very similar, but their feathers are slightly duller. They raise their young together, while males tend to have more parenting responsibilities. They are very acrobatic and like to attract others’ attention. You can find them in your yard throughout the year, but mostly during the winter.

European Starling was first introduced in North America by Shakespeare enthusiasts in 1890 but is now one of the most common songbirds in the United States. They have short tails, yellow and pointed beaks, and black plumage. During the winter, they tend to be covered in white spots. They are also very noisy birds with a wide variety of loud and demanding calls.

One of the most widespread songbirds in the world is House Sparrow. The reason why they are almost everywhere is that they easily associate with humans. They are highly adaptable and can survive in tough rural areas, such as sidewalks in big cities. What is also really cool about them, is that they take frequent dust baths by throwing dust and soil all over their small bodies.

Because of how they are presented in our pop culture, American Crows are often associated with fear. However, these birds are not only beautiful but also highly intelligent. Male and females are almost identical. They are quite large, all-black birds with brown eyes, and have a square-tipped straight tail. You can also easily recognize them by their “caw-caw” call.

If you spot a bird in your yard with a red breast, grey back and wings, and striped throat, it will be probably an American Robin. These birds often run and hop in the yards looking for worms, insects, or berries to feed. They also love birdbaths or any other water features where they can drink. You can find them in your backyard anywhere in North America year-round.

If you regularly leave the food in your bird feeder, there is a huge chance that sooner or later, you will attract the Blue Jay to your yard. They are one of the most colorful and loudest birds that can be found in the eastern part of the country. Their calls are really noisy, so it is easy to distinguish them. What is also really unique about them is their bright blue, white, and black plumage.

If I had to choose the cutest backyard bird, that would be a Black-capped Chickadee. You can mostly spot them in the north of the country. If you have a bird feeder, it is easy to attract them. They love eating black oil sunflower seeds, suet, and peanuts. They are tiny, have rounded heads, and mostly black, grey, and white feathers. Their calls are also one of the cutest out there.

If you spot the bird that flies to your feeder, quickly grab some food and leave, that’s probably a Tufted Titmouse. It’s because these birds don’t like to stay too long where the food is. They are located most often in the eastern part of the United States year-round. They have big black eyes, small and rounded beaks, and brushy crest. They usually have their food storage within 130 feet of the feeder.

Just like Tufted Titmouse, White-breasted Nuthatch also loves eating sunflower seeds or suet by flying to your feeder, grabbing the food, and rapidly flying away. However, these birds tend to spend a lot of time carrying seeds to hide them in the crevices. They have black caps with white throat and gray-blue back with black colorings. Females are a bit duller than males.

Common Grackles might look like bullies, and they often behave like ones. They appear in huge flocks and chase away other birds, especially when food is at stake. They are all black, except their heads are bluish. They have long bodies and legs they use to walk around lawns and fields. They are also very loud and tend to gather in large groups on tall trees.

Baltimore Oriole is one of these birds you want to attract to your backyard. Its beautiful bright orange plumage won’t let you stop looking at it. It might be tricky to make them come to your feeder, but don’t worry. All you have to do is leave something sweet that contains sugar. You can, for example, live some jellies. Once you get them use your feeder, make sure to do everything you can so they won’t leave it.

When you see a Dark-eyed Junco in your yard, it means that winter has arrived. They only show up during the cold months and only feed on the ground, so make sure you put some food for them over there. Their colors vary across the country, but they are mostly grey with white underparts and tails. They have a size of a House Sparrow, meaning it is sometimes difficult to spot them.

Even though Carolina Wrens are all-year birds in the United States, you can spot them eating from your feeder only during the winter. It’s because during the warm months they hunt insects and don’t need your food. They are reddish-brown on top and tannish on their underparts. What is also typical about them is their thin, long, and slightly hooked beak.

If you see a delicate raspberry red on the head and breast bird, you can be almost sure it is a male Purple Finch. This species is strictly named after a male since females have no red color. You can easily attract them with sunflower seeds. During the summer, they mostly spend time in forests, while during cold months, they tend to visit a wider variety of habitats, such as old fields and backyards.

Red-winged Blackbirds with their black wings look majestic, but they only visit feeders during the winter, so it is not easy to observe them from a close distance. They protect their nests very carefully, and if any bird gets close, they do not hesitate to attack them. They typically feed with seeds and insects from the ground. That’s why attracting them to your yard can be challenging.

You can describe a Northern Flicker as a large woodpecker with a slim and rounded head, downcurved beak, and a long tail that tapers to a point. Flickers have a brownish overall with a rump patch. For eastern birds, the wings and tail feathers are bright yellow, while for western they are red. It’s best to look for them in woodland edges and forests.

Last on this list is a Northern Mockingbird that sings from exposed perches year-round during nesting season, sometimes even at night. You can find these birds typically in the southern areas of the country in towns and cities. While protecting their nests, they can even attack cats or humans if they approach too close. They usually feed with insects that they find on the ground.

We hope that this list of the 21 most common backyard birds will help you identify every bird that will feed on your tray feeder. Before you become an expert at distinguishing birds, make sure to take photos of everyone one of them approaching your yard. It will help you significantly!

Let us know which bird is your favorite, and as always, please share!

How To Seed a Lawn: Your Guide to a Beautiful Lawn

Scroll back to top
8shares