9 Plants You Should Not Prune in Summer - Backyard Boss Skip to content
We are reader supported. External links may earn us a commission. 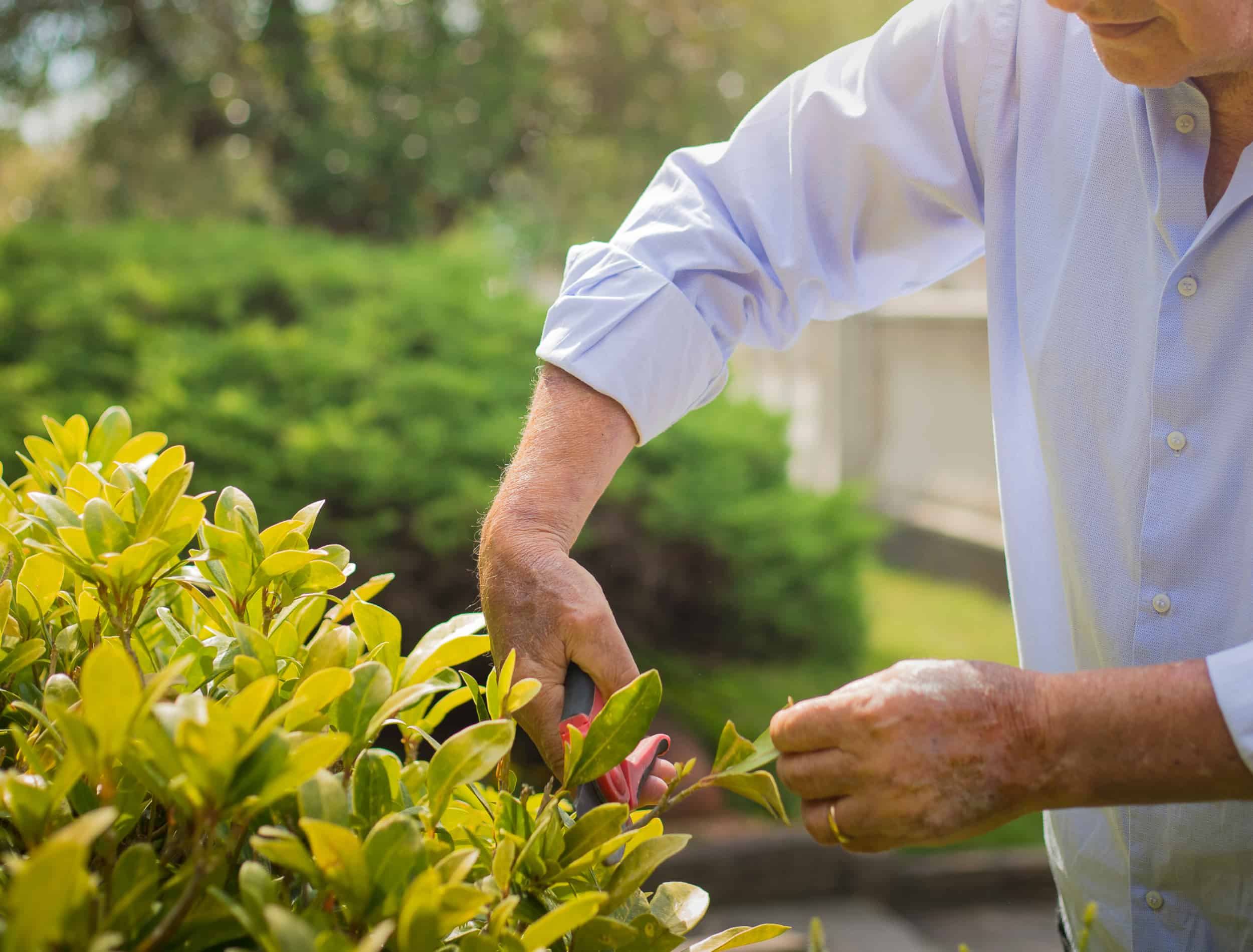 Pruning is a crucial care technique that encourages growth and can help your plants maintain great health by cutting away dead or overgrown branches or stems. Shearing the foliage off plants, young or mature, dwelling indoors or outdoors, requires taking the seasons into account.

It’s best to prune when a plant is dormant, and while summer pruning is generally favored for its restorative effects, some plants make better use of the summer to heal their wounds from pruning. Trimming in the hottest season could overwhelm them. Read on to find out which plants you should hide the shears from in summer.

9 Plants You Shouldn’t Prune in Summer

Native to the northern hemisphere, the potentilla shrub primarily produces yellow blossoms. The plant thrives in full sun or light shade, and it’s best to plant it in well-drained soil. As its growing season peaks in late spring, you shouldn’t prune it in summer.

Rather, prune potentilla shrubs in early spring or fall by removing 50 to 75 percent of their top foliage. Potentilla is a hardy shrub, and its blossoms can take care of themselves, so there’s no need for deadheading. Wait until the plant is at least three years old to ensure it is strong enough to handle the pruning.

The smoke bush is an ornamental shrub that boasts purple and yellow leaves with blossoms that puff out like clouds of smoke. Their mystifying display can become unruly if left unpruned. Pruning smoke trees annually helps make the shrub strong and more compact.

As a summer-flowering tree, the smoke bush needs to be pruned in late winter or early spring, while the plant is mostly dormant. For serious trimming, late winter is ideal. To reshape, prune between six to eight inches above the ground. However, you will be sacrificing flowers for the next blooming season.

Hydrangeas are a large variety of flower plants with species differing in their pruning preferences. Two species of hydrangea aren’t keen on being pruned in summer; these are Panicle and Smooth Hydrangeas. So if you’re wondering why your hydrangeas aren’t blooming, pruning at the wrong time could be the reason.

Panicle-type hydrangeas are beautiful and resilient, with white blossoms that mature into pink. They can withstand temperatures as low as -30 degrees Fahrenheit. These hydrangeas are native to China and Japan and were introduced to the west in 1862. Prune panicles in late winter to prevent them from overgrowing.

Native to North America, smooth hydrangeas flourish in light shade and blossom mid-summer until fall. Their rounded, creamy white flowers can spread far and wide, and, if maintained under ideal conditions, this shrub can live up to 20 years.

This hydrangea plant’s tendency to spread means it can overgrow, so pruning it between early and late spring before its full growth is a sure-fire way to maintain it.

Begonias are a diverse type of plant, boasting tropical and subtropical origins. People who live in warmer climates can prune begonia plants in spring, whereas people living in cool climates can prune these plants in autumn so they can fit indoors where they can safely live through the winter. Here’s an in-depth begonia guide to learning how to care for these beauties.

Adored by pollinators and gardeners alike, morning glories are prized for their heart-shaped leaves and fragrant, trumpet-shaped flowers. Their slender vines can be trained over pergolas or arches, which proves their beautifying quality. Usually, morning glories don’t require pruning unless frost has killed their foliage. If your plant overgrows, prune it in autumn, at the end of the blooming season.

With dark green foliage and paper-thin flora, the crepe myrtle is a small shrub that thrives in full sun and a variety of soils. It’s best to prune this shrub sparingly in winter or early spring. Pruning in late winter is especially easy because the shrub is leafless, making it easier to see all of its branches.

Rhododendrons are a fairly low-maintenance bush that loves acidic soil and partial shade. It has over a thousand species, both evergreen and deciduous. While pruning in the spring is standard procedure for most gardeners, as the bush will have finished flowering by then, sometimes the ideal time for pruning rhododendrons is late winter, while the plant is dormant. If you prune in summer, the bush will hardly flower in the next growing season.

Nerium oleander, or simply oleander, is a beautiful but toxic shrub that blooms nearly year-round. The hardy plant produces star-shaped blossoms and has a carefree growing habit due to its extensive root system, which can make it invasive if not maintained. Countering the oleander’s beauty is its toxicity. The whole plant is toxic to the touch and especially noxious if one accidentally inhales the smoke of burning oleander. Regarding pruning, trim Oleanders in late winter or early spring, and don’t forget to thin out crowded shoots and remove dead or damaged growth.

Prized for their extending cluster of buds, butterfly bushes are great at attracting pollinators, especially butterflies. Since they bloom between late spring and summer, deadheading is an important part of caring for the plant. By removing the spent flowers, you will encourage a new set of blossoms in the same season. Butterfly bushes don’t need to be pruned every year. Trim them when they overgrow the space you’ve allotted them. Most gardeners prune them severely between late winter and early spring to encourage new growth and abundant flowering.

The Benefits of Pruning

Out with the old and in with the new; pruning truly captures the spirit of this phrase. While this article details which plants you shouldn’t prune in summer, understanding why you should prune is the first step to apprehending how to prune correctly.

1. Not Planning Before You Prune

It’s important to have a particular goal when pruning. A simple strategy to follow involves the three Ds: pruning parts that are dead, diseased, and dying.

Proper pruning minimizes damage and allows a plant’s wounds to heal faster. Improper cuts include flush cuts and stub cuts. Flush cuts happen when you cut too close to the trunk of a tree, which leaves a large wound that won’t heal properly. Stub cuts involve cutting too far from the trunk, which makes it vulnerable to decay.

The growing season is usually between mid-spring to late summer. You could leave your plant stressed, starved, and parched by pruning during this period. Trees use leaves to make food, and pruning them during their growing season could cause them to starve.

Never underestimate the damage blunt shears can do to a plant. Rough cuts often lead to shredded or frayed stems and bark, which causes larger wounds. For safe and easier pruning, use sharpened tools.

Topping involves cutting the top part off of a tree or shrub. Its utility lies in maintaining plants that grow out of their allocated space. However, this process can cause plant stress and create an imbalance in appearance and weight, which leads to over-pruning. To avoid topping, consider the standard height of the plant in its maturity before planting it.

Every cut matters, and over-pruning at any time of the year, whether your plant is growing or dormant, can cause stress, making it vulnerable to disease. Cuts are wounds, and each stem or branch lost was a source of sustenance for the plant. The lower the supply of resources, the lower the rate of the plant’s photosynthetic capacity, which could lead to its death.

Since pruning is a process of wounding a plant, it’s natural that the pruned plant needs enough time to heal its cuts before it can flower or regrow leaves. Since summer is the usual growing season, it’s only fair that you prune your plants well before the growing season, so by the time summer rolls by, they’ve healed before their new foliage begins to grow.

Hopefully, this article helped you with all the information you need about pruning your plants! Please leave a comment down below if you have any questions. If you enjoyed this article, please don’t forget to share it with your family and friends.

How to Winterize Your Home

How To Grow Lettuce

How To Use a Pruning Saw

Scroll back to top
473shares