15 of the Best Outdoor Snow Games for Kids - Backyard Boss Skip to content
We are reader supported. External links may earn us a commission. 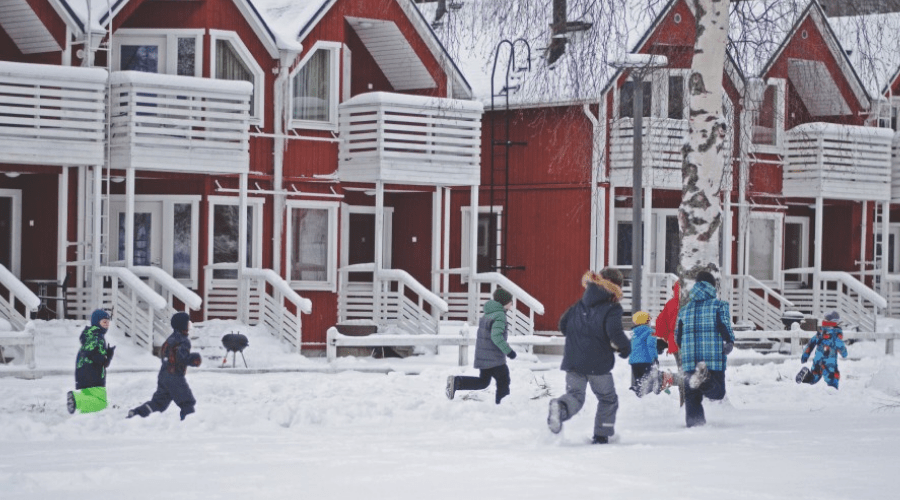 It’s the most wonderful time of the year, and while adults are somewhat intimidated by the cold outside and would rather stay in and enjoy a warm beverage and the warmer temperatures, kid adores having fun in the snow. If you have kids or are merely babysitting the neighbors’, we’re going to give 15 of the best snow games for kids to plan an enjoyable Saturday afternoon outside.

You all know how a game of tag works, but what if the snow added a little twist to it to make it more interesting? The rules are the same as in a regular tag game, except the players are allowed to step in each other’s footsteps. You can customize the rules a little bit to make them more or less challenging for the kids. Kids of all ages can play the game, but they must be of similar ages (a 3-year-old child would have a tough time stepping in the footsteps of a 12-year-old). 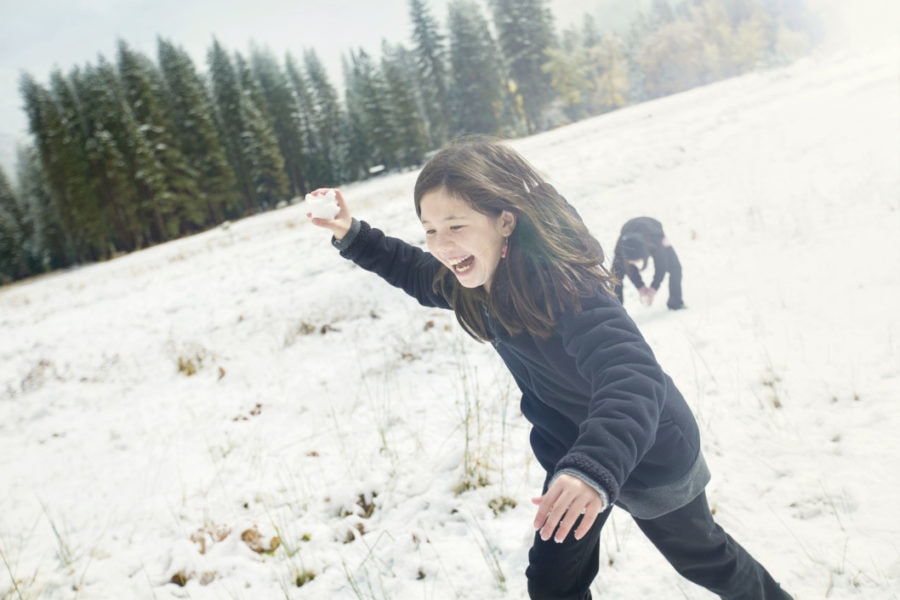 What could be easier than setting up a target and having children take turns and throwing snowballs at it? You can even make it a competition based on points. You could set up a larger target, similar to a dartboard: with areas that give out a certain number of points if you hit them. The child who gets the most points after throwing ten snowballs gets a delicious reward (maybe fresh-baked cookies?). Children over the ages of 3 can play the game, and it should be a lot of fun!

Fancy a game of Tic-Tac-Toe—in the snow? It’s effortless to teach children how to play it, and since you’ll be using snow as a playing board, no pen and paper are required. You can get ready creative with this game, as children can use pieces of wood to make Xs and something like pinecones or acorns to mark the Os. No matter what you choose, make sure that kids understand the rules, and are ready to take on the challenge. The game is perfect for kids above the age of 4. 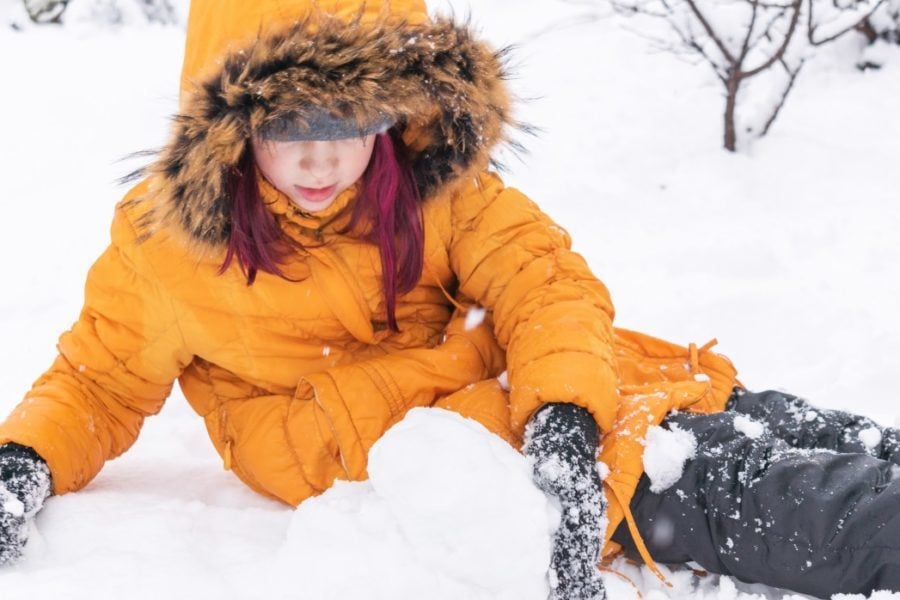 What if you shower children how they can mold snow just as they would with sand on the beach? Who’s to say kids can’t use their toy bucket or some of your kitchen molds to make snow castles and other cool shapes to decorate their winter fort? It’s one of the most inexpensive ideas that could provide kids with something to do and hours of fun playing outside. The game is perfect for children of all ages, as long as they can hold a mold in their hands. 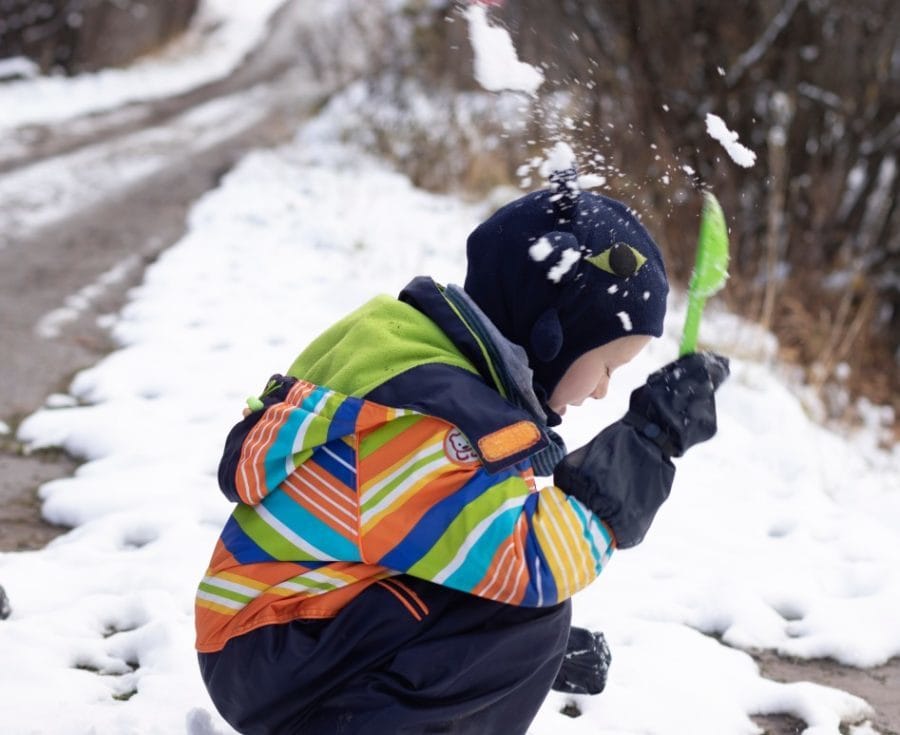 Yes, it is just like a scavenger hunt, except players must find objects hidden in the snow! What you hide for the little ones to find is entirely up to you. You can make it simple but fun by simply freezing some colored water (water mixed with food colorant) and hiding the cubes in the yard. You can also choose to hide treats, like (carefully wrapped) candy canes for little ones to find. Snowvenger Hunt is suitable for children ages three and over.

This game requires tying a piece of cloth to a stick and having the children take turns hiding the flag within a designated area in the snow (it could be the perimeter of your back yard, for instance). One child hides the flag and waits for all the other children to try and find it. You will have to time how long it takes for the flag to be found in each round. The child that hides the flag best (judging by the length of time it took for the others to find it) wins! This game can be played by children ages four and up. 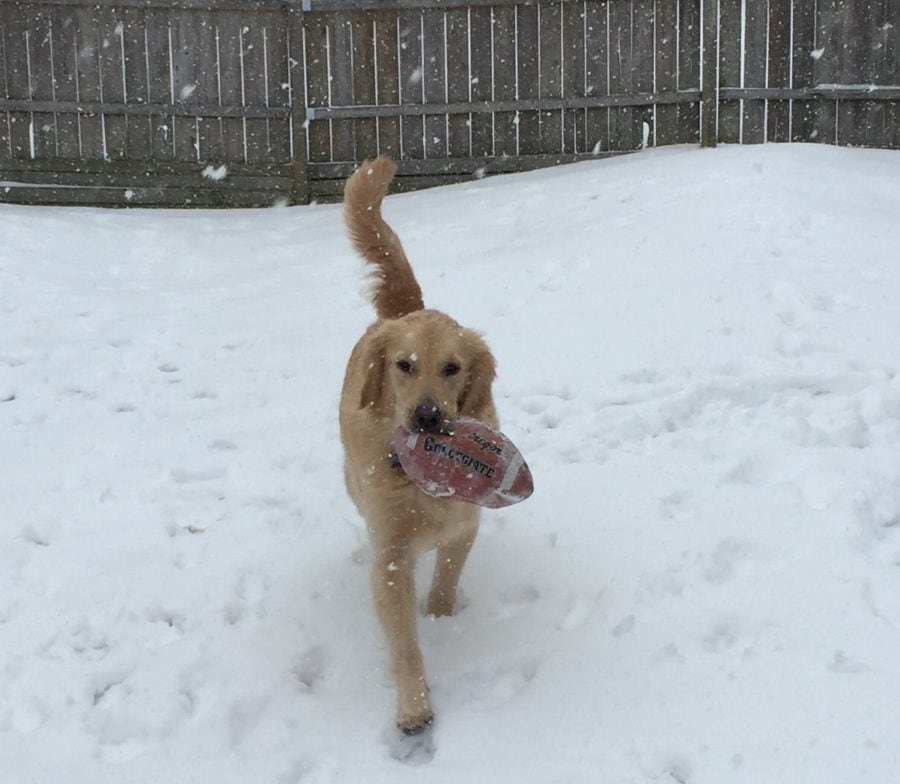 This particular winter game is suitable for older children, and you need at least six people (two teams of at least three players each) to get the game going. You can mix food coloring and water in a bottle and spray it on the snow to mark the playing field—teams position at opposite ends.

As someone from the receiving team gets the ball, their mission will be to go back across the defense’s goal line. They will have to do that by either passing the ball to a teammate or running with the ball. If an opponent tags the ball or the child holding the ball steps over bounds, the round is over.

The other team gets to be on the receiving end after four tries or after scoring a touchdown. This game is best for ages six and up.

This is a rather unconventional combination between getting children to make a snowman and having them play Frisbee at the same time. Once a decently-large snowman has risen from the ground, give children a hat and have them aim it towards the snowman’s head. The goal is to throw the cap just like a Frisbee and have it land on the snowman’s head. Whoever gets to do that first wins. The game is suitable for children above the age of 4. 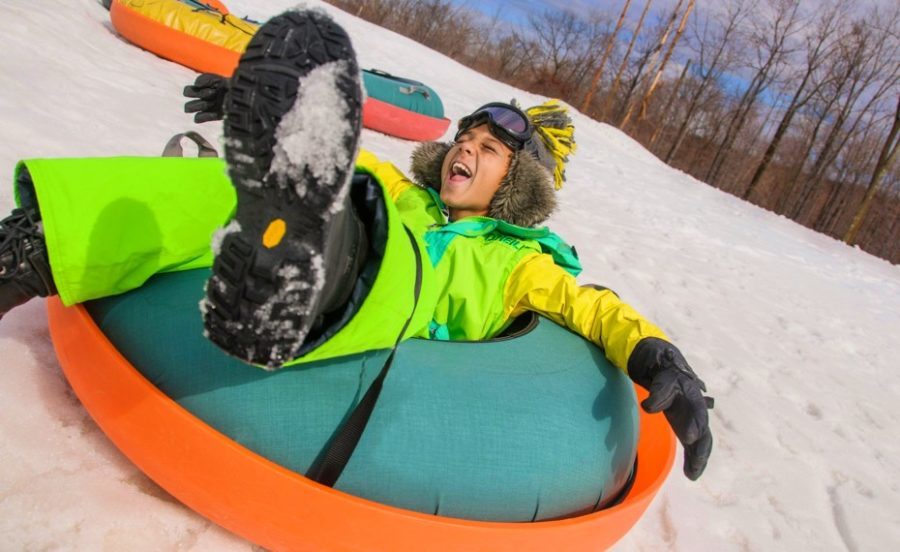 If your children happen to have access to a snowy slope, it is the perfect opportunity for them to go sledding. This is the classic way to have fun during the winter, but the children will need the proper equipment like a sled or a snow tube. If the kids don’t have either of these, you can also use thick garbage bags or larger pieces of plastic (and let’s not forget the classic toilet seat sled). This game is fun for all children to use a snow tube or a sled without an adult riding with them.

You surely remember the classical dance of “Follow the leader.” What if you could turn this into a snow game for kids? As the leader, you have to make footsteps in the snow from point A to point B and have the children follow you by stepping in your footsteps. Every time a child steps outside of the previously made footsteps, they are eliminated from the game. Make sure that your footsteps are realistic to follow. Otherwise, it can be frustrating for the little ones. This game is for ages 5 and up. 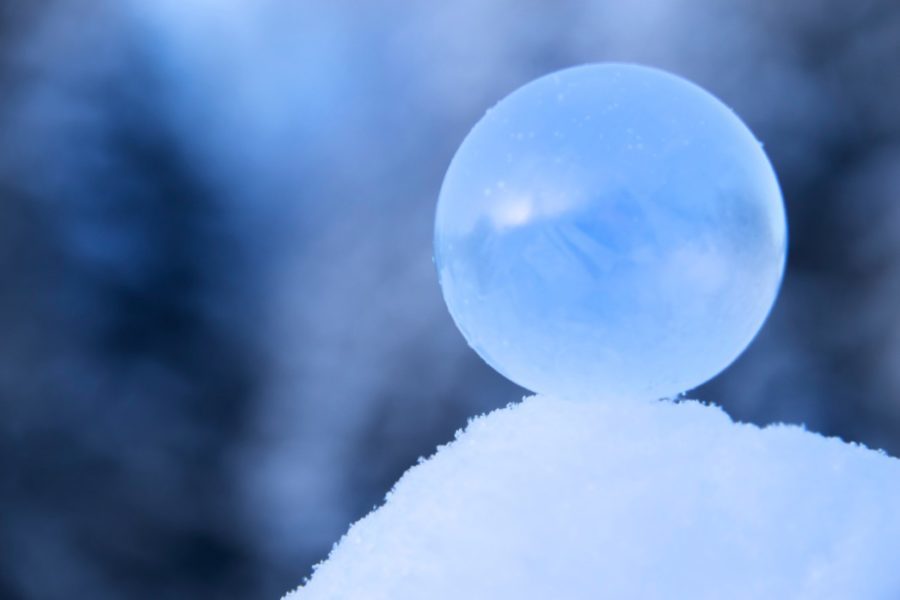 What you’re going to love about this idea is that it is more than just a kid’s snow game: it’s a chance to teach them a little bit of science. You will have to make a bubble solution out of dish soap and water or use one of the conventional bubble maker toys available on the market. Teach children how to make ice bubbles when the temperature outside is below the freezing point. After blowing a bubble, the children will have to catch it on their want and watch as it freezes and shatters. This will be a fun activity for all children above the age of 2.

This is a twist of the classical game of “pin the tail on the donkey.” The children will have to build a snowman, but without putting a nose on him. Once that’s done, take turns and blindfold each of the children, spin them around a couple of times, and have them try to pin the nose on the snowman while still being blindfolded. Whoever gets to pin the carrot (you can use sticks as well) closest to the center of the snowman’s head wins. The game is best played by children that are at least four years old. 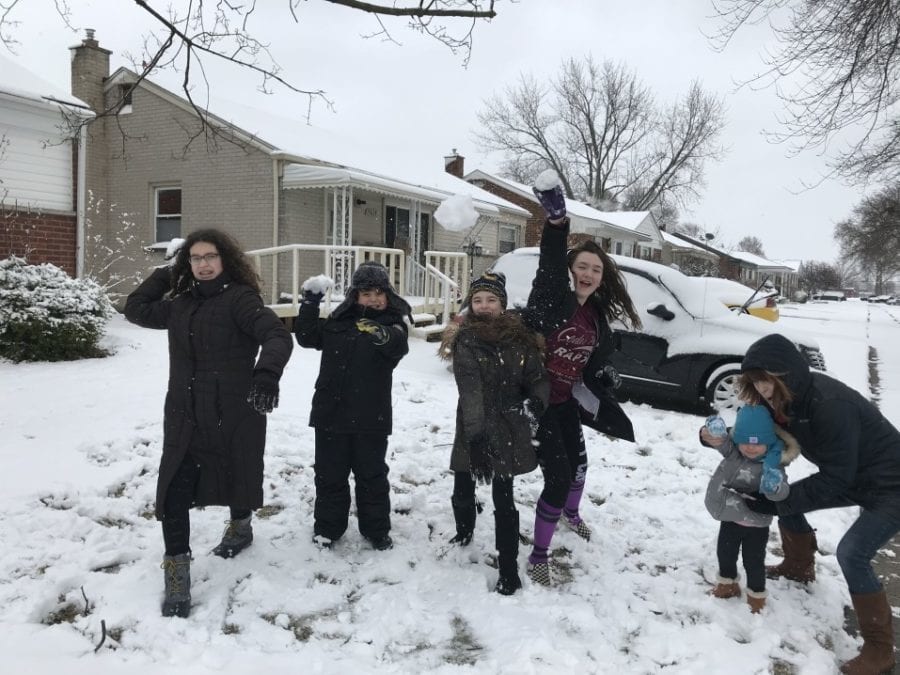 This is the classic dodgeball game only without the pain of kids being hit by an actual ball. Instead, children will have to take turns and throw snowballs at each other. Make sure that you supervise the kids as they’re making the snowballs so they are soft and won’t cause harm when hitting another kid. The children are meant to be split into two teams. Whoever gets hit by a snowball is eliminated, and the team that ultimately manages to eliminate the other team wins. The game is great for children age five and up.

You know about cornhole or bean bag toss. You can remaster the rules to recreate a winter-themed game for the children. Grab two large cardboard boxes and cut a hole in the top middle of each. Divide players into two teams and have them throw snowballs at the opposing team’s cardboard box. Whoever lands the snowball in the opposing team’s holes wins. The game can be played by children above the ages of 3, but make sure there aren’t significant age discrepancies between each group (for instance, a ten-year-old will have better aim and greater accuracy than a three-year-old). 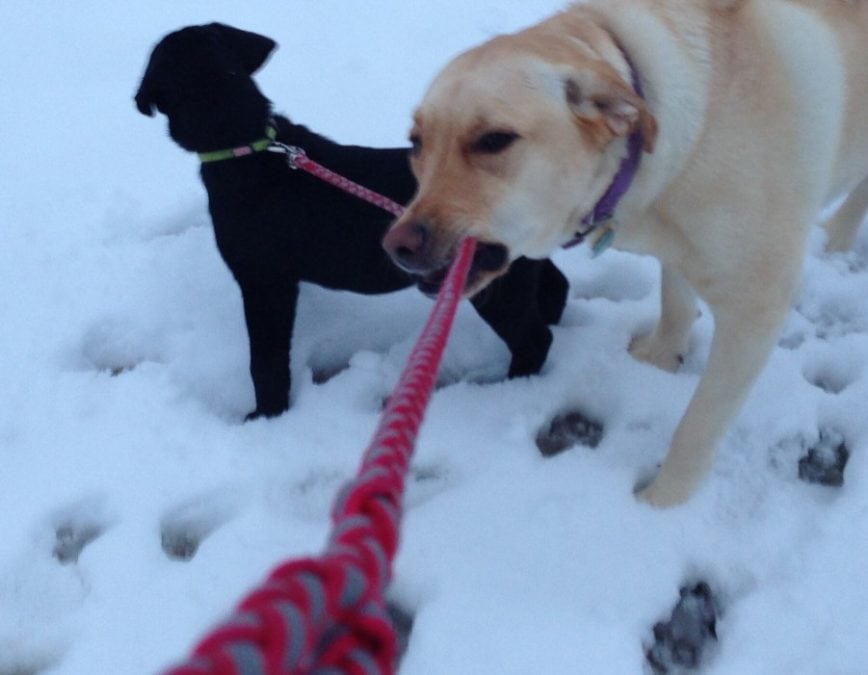 Rope tub is a classic childhood game for most of us, and you can have the little ones playing it in the winter by making a deep line in the snow (the one that’s going to separate the turf for each of the two teams) and then give the kids a rope to pull on. Ensure that the children are of similar ages, as the differences in size and strength can favor one team and pose a disadvantage to the other. Children should be at least seven years old, as there are fewer chances they will end up hurt when pulling the rope.

Having some good old fun in the snow during the winter is an absolute must for children and should even be considered by adults. The best part about these games is not just the fact that they incentivize kids to spend more time outdoors, but also that they are easy to set up, with basic and straightforward rules, and very cost-effective for the parents. You can set up an entire winter playground with stuff you have lying around the house and, if you want even more inspiration, just think of the outdoor games you used to play as a child and a winter-related twist to them.

26shares
Scroll back to top
26shares