Doing some yard work or gardening for the first this weekend? Ensuring that you have the right tool for the job will avoid excessive work, injuries, and provide the optimal result you desire. But how can you tell which gardening tool is going to be the best for you? A spade vs a shovel, for example. There are pros and cons to both like how a shovel will help ease the work of moving around the loose material, whereas a spade can dig into hard surfaces and create loose material. It really depends on the project at hand, so let’s review and you can determine for yourself.

In order to choose between two similar items, so similar that people often get the two mixed up, we have to break down their features and purposes. By sorting between the two garden tools, you can begin to see whether you should use a spade or shovel for digging. They each fall into their own categories of purpose and you, the user, can decide which one is best for your project.


WHAT IS A SHOVEL, EXACTLY?

It’s a wide and flat surface on the end of a long handle and is used to move or “shove” material from one place to another. They come in a few different variations, but it’s one of the most common garden tools and can be used all year round.

WHAT IS A SPADE, EXACTLY?

A spade, while quite similar to a shovel in appearance, is actually meant to be used for digging material, not moving it. Spades are often slenderer in shape and have a pointed end which is perfect for getting past several layers of material. It’s not as commonly used as a regular shovel, but a spade is definitely a must-have in the garden shed if you do any sort of gardening or landscaping during the Spring and Summer.

MAJOR DIFFERENCE BETWEEN A SPADE AND A SHOVEL

At first glance, the two garden tools appear to be two variations of the same object: a shovel. But there are some key features that set the two apart; shape, length, blade, and handle.

A shovel often has a wide and flat shape, which is great for sliding underneath material and scooping large amounts of it to move from one place to another. But a spade has a slenderer base and a pointed end. Furthermore, the shape of a spade end is usually concave, where a shovel is simply flat or only slightly rounded. The length of a shovel from handle to the base is often long enough for a full grown man to grasp and be mobile without having to bend much. A spade, while they do come in a longer length, are more commonly found in shorter versions because they are meant to be used at a closer proximity to the surface of the ground. The blade of a shovel is often quite flat, which is great for the ease of slipping it tightly underneath the material you wish to move. 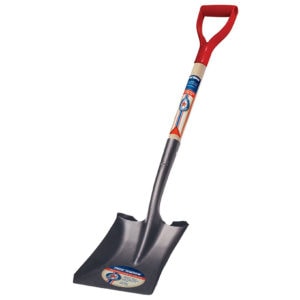 A spade, on the other hand, may have a pointed end but the bladed sides are a little thicker. As for the handle of both tools, they both come with one. But a shovel always comes with a handle to grip. A spade, however, is better used without a handle, especially the shorter lengths. Having a thick, rubber, easy grip end rather than a shovel handle helps the spade perform better.

A Long Spade with a Handle

Check The Price
A Short Spade without a Handle 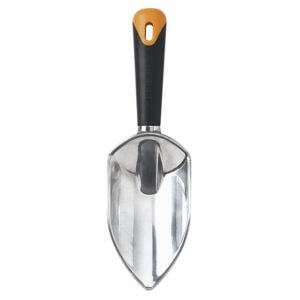 And for those of you who are extremely visual and prefer the aid of a nice, instructional video, here’s a quick clip that clearly demonstrates the key differences between a spade and a shovel:

Whether it’s a weed wacker, a rake, or a digging tool, there are different variations of each that help tackle certain tasks better than other versions. For example, a shovel can be found in a circular, square, or scoop shape. A spade can be long and slender, wide and angular, or even sharp on one side to slice through tough material.

Given the choice between the two garden tools, I would definitely go with a shovel. The option to have a model that does both the tasks of each tool within one is very appealing. Cutting down on the number of tools that take up space in my garden shed is also a plus. When I have a number of different maintenance projects for my yard, I like the idea of pulling out one tool for most of them. While a spade is great for gardening, in particular, it just wouldn’t cut it for the other things my property requires such as spreading gravel, filling plant beds with soil, and clearing my decks and walkways of debris. So, taking everything into consideration, I would choose a shovel, and this model seems like the perfect fit: True Temper Long Handle Digging Shovel. Hopefully, you found this information to be as helpful as possible. It may seem like such a minor decision, but keep in mind that a shovel can do the work of a spade, but not the other way around. Feel free to share and comment on what tool worked best for your project!

Definitive Guide to the Top Hand Saws in 2020 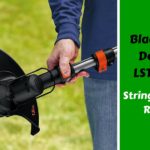 The Best Fit For Your Comfort: Straight vs Curved Shaft Weed Trimmers

Scroll back to top
10shares