The Myth of Searing in Juices - Backyard Boss Skip to content
We are reader supported. External links may earn us a commission. 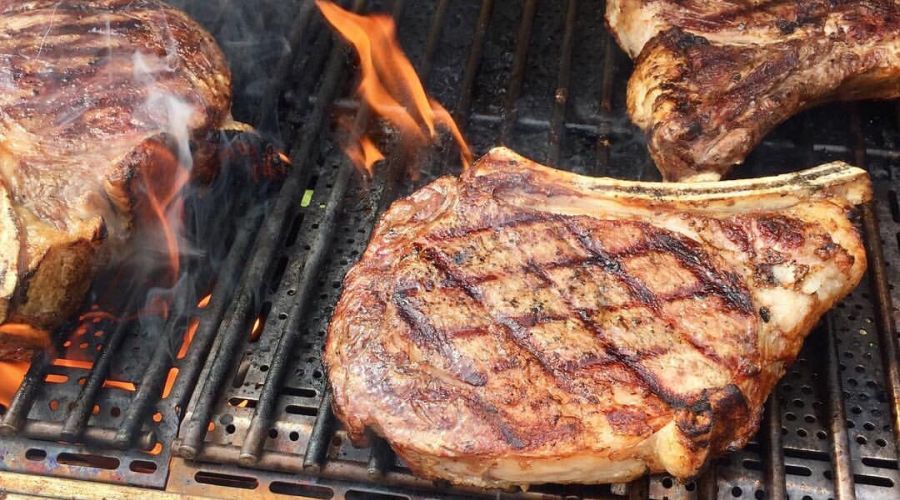 If you ask a barbecue enthusiast about why they sear their meat, they’re likely to tell you that they do it because it prevents moisture loss. It’s been done for years, and most people sear their meat because that’s how they were taught to do it.

In recent years, people started questioning the process; many people now believe that searing a cut of meat will do nothing to help keep it juicy.

What’s the Premise Behind Searing?

The idea behind searing is a simple one: People believe that the crust formed from exposure to high heat causes meat to lock in all the juices that would have been cooked off had the crust not been there. Logically, it makes sense, but only if the crust actually creates a barrier that locks the liquid in.

When you look at searing meat from a scientific perspective, it actually tends to dry your meat out more than other cooking methods. Meat doesn’t have pores like your skin does, so when you cook it enough to create a crust, you don’t create a waterproof barrier. Searing at a high temperature actually does the opposite; it removes moisture from near the meat’s surface.

Have You Noticed Sizzling After Searing?

If you’ve ever seared a steak or cut of meat, then you’ve probably noticed that the meat sizzles after you take it away from your heat source. If searing really trapped juices inside of your meat, you would never hear that sizzling after the meat was removed from the heat. The sizzling is juicing that is being quickly evaporated by the high heat that they are exposed to.

Meat is composed of about 75 percent water, and this water is locked into thousands of thin muscle fibers. When you heat the muscle fibers, they contract, and this results in squeezing out some of the liquid that they contain; there is really nothing you can do to stop the process. When you cook a cut of meat, you’re always going to lose some moisture due to evaporation and constricting muscle fibers.

If you think about it logically, it makes sense. Have you ever cooked a steak, rested it, and then found it in a puddle of juice? It doesn’t matter how good your sear is; you are always going to find that moisture is going to pool on the surface of the meat.

What Is the Point of Searing Then?

When you sear a piece of meat, you add to its flavor. You don’t “sear in” the juices, but you do caramelize the surface. When you cook up a good piece of meat with a solid sear, the heat and smoke produce a wonderfully complex taste that accentuates the natural taste of the meat.

When the proteins and sugars in a cut of meat are exposed to high heat, a bunch of chemical reactions takes place; these chemical reactions create a lot of new flavor elements. The combination of these flavors with the juicy meat is one of the reasons that things like steak taste so good.

Searing also produces a contrast between the crispy outside and the tender inside. When you bite into a cut that has been seared, the texture and flavor create a contrast that just can’t be beaten. A good sear brings out the taste of your meat, and it also creates a texture that accentuates the soft and juicy meat inside of the crust.

Science has proven that you don’t need to sear your cuts of meat to keep them nice and juicy, but when you do sear them, you definitely add a layer of flavor and texture to your meat. The real goal of searing is to create a flavor that stimulates your taste buds. When you have a nice and crispy crust, the caramelized sugars give the meat a tasty and complex flavor that most people find quite appealing.

How to Remove Rust From BBQ Grill Grates

7 Plants That Thrive in Clay Soil

How to Winterize a Swamp Cooler

How To Keep Your Outdoor Christmas Decorations From Fading

Scroll back to top
16shares