Three vs Two Stage Snow Blowers: Powerful How-to Snow Removal Made Easy Skip to content
We are reader supported. External links may earn us a commission. 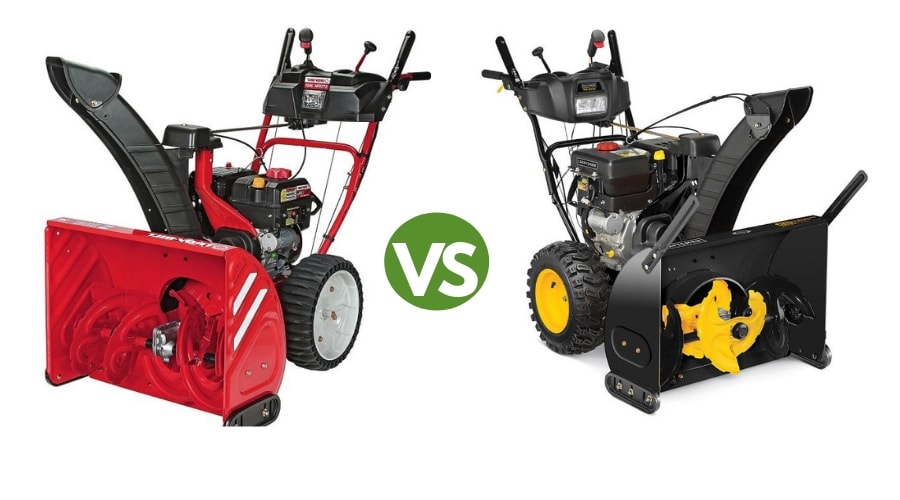 Not sure whether you need a two-stage or three-stage snow blower? We explain the difference and help you pick a model that’s suitable for your needs.

What to Look for in a Snow Blower

Before you go shopping for a new power tool, make sure you know exactly what to look for in a snow blower. Beyond stages, you’ll find a few more relevant criteria below.

Most homeowners with minimal snow to clear do well with single-stage snow blowers. For those with larger properties, a two-stage machine is highly recommended. Business owners with parking lots and storefronts to clear of snow should consider three-stage machines. If you have a sizable residential property and frequent heavy snowfall, you might get sufficient value out of a three-stage snow blower.

The size of the scoop, or shovel, that makes up the mouth and scraper of the machine’s intake system is crucial. It determines how much snow can be taken into the machine and thrown at a time. Snow blowers typically range from 18 inches to 28 inches wide. That said, intakes are available in virtually any size you can think of.

The size and type of tires on a snow blower makes a huge difference. From width to height and tread-type, various factors determine how easy, or hard, the machine will be to move forward through the heavy wet snow and slippery ice.

Homeowners with smaller walkways and narrow driveways can do well with 12-inch tires, whereas commercial snow clearing should be done with units with 15-inch wheels at the least. On another note, some snow blowers come with tracks or snowshoes rather than wheels.

Depending on how large your yard is, or how close your sidewalks and driveway are to your neighbors, this factor may be more or less important to you.

The discharge chute type is yet another critical aspect to consider about snow blowers. This determines how easy the chute is to turn and aim/readjust angle-wise and directionally. Chutes that have over 180-degree rotating capability, and remote control functions, are among the best machines.

Believe it or not, gasoline is not the only fuel type that runs snow blowers these days. Electric snow blowers are becoming more powerful and reliable each year. Diesel and other fuel forms (hopefully one day, Doc will come back from the future and create a trash-fueled model snow blower) may also be available in hybrid models.

There are a host of features and functions that are available on the best snow blowers only. These features may include:

Depending on how much extra functionality you want, or don’t want, the options are quite impressive these days.

The price of a snow blower is important, of course, but often comes down to your personal budget for such purchases. If you have a tight budget, a two-stage snow blower is going to be your most affordable choice. Sometimes, however, three-stage blowers are incredibly affordable for the extra power and utility they offer.

The Difference Between 2-Stage and 3-Stage Snow Blowers

While the differences are not so vast as they can seem at first, even the smallest differences can make huge impacts on how useful a particular model of snow blower is for you and your specific needs.

The biggest difference in performance between a two-stage and three-stage snow blower is that three-stage blowers use an extra auger for cutting or dicing ice and frozen snow. Two-stage snow blowers tend to have less ice-breaking and cutting power than three-stagers. This is because of how their impellers and augers are designed to “pull” the machine along, especially in heavy snowfall, rather than to help break down the harder frozen stuff.

Where most three-stage blowers are made specifically for professional use and have a limited amount of models to choose from, two-stage blowers have a large variety of model choices for both residential and commercial use. Two-stage snow-blowers have made many of your best product roundups. For example, they’re great snow blowers for wet snow.

A two-stage blower uses both an auger to help cut and aerate snow, as well as an impeller to throw snow. These are driven by varying sizes of engines and housing sizes depending on what use they are designed for. Compact versions are available for easy storage and mobility in smaller residential areas that get small to medium snowfalls, and larger sizes for large properties and heavier snowdrifts.

Differing auger sizes, including serrated versions, can be found and used as well to help with the movement of snow. Plus, these machines are engine-, rather than auger-driven, and may include a series of gears for both forwards and reverse controls. 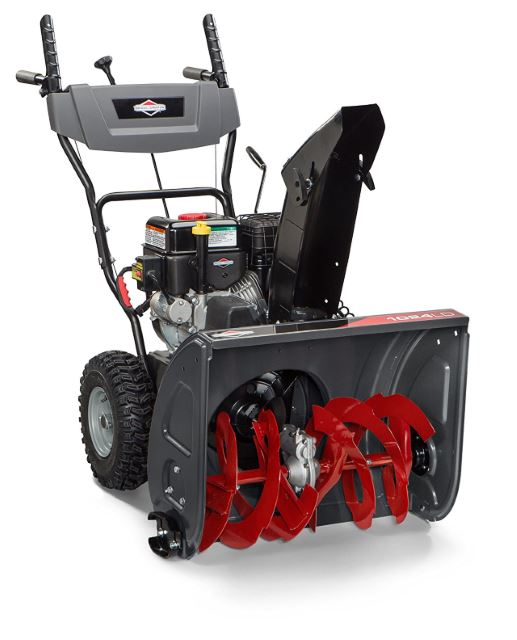 A large selection of choices is certainly helpful in allowing you to find exactly the product you need with the details you want to help you get the job done in comfort. These choices also allow you to control your price range for snowfalls that may be lighter in nature versus areas that see deep, icy, and heavy winter precipitation.

Many of these machines can throw snow 30 to 50 feet away as well, making them very versatile to property sizes and needs. They are also popular for uneven terrain and gravel drives as the auger is slightly angled, allowing for it to be raised above the ground and providing space between its rotation and the ground surface.

Power assist to tires allows for gear shifting and further control for terrain and snowpack differences. X-track tires and even treads can often be seen to help with traction to better meet the needs of large property owners. All of these options also result in differing costs to meet the budgets of a wider variety of consumers.

Like a three-stage blower, two-stage blowers are all powered by 4-cycle engines and need to be maintained, although this is generally fairly easy to do at home as they are built more for residential use. Many have very powerful engines that are incapable of doing all that they are built to do basically because they are limited in overall constructive size and design.

Meaning they could handle heavier work if the model was built big enough and tough enough to handle it.

Also, that auger placement, which allows you to use over rough terrain and gravel drives without causing damage, also leaves behind a layer of snow. Therefore, if you are looking for a clean surface after moving snow, you will need to follow up with a shovel or other tool to help clear it off.

Many people are familiar with the differences between single and dual-stage snow blowers but are somewhat unsure of how to define a three-stage blower. This is because a three-stage design is often sought after by professional outfits, and overlooked by residential owners. But, this doesn’t mean they aren’t accessible to homeowners, or shouldn’t be considered as long as what they offer is beneficial to your specific snow moving needs.

Three-stage blowers use an impeller and an auger to take up and move snow, but they also include an accelerator to mix and chop snow at a rate of speed 10 times more than the auger. This helps to provide more air and create material that is easier for the blower to throw further.

This addition also allows these machines to get through heavy, wet, and icy piles of snow and move it more quickly due to the overall mix of air and winter materials.

Because of this, they usually have larger engine sizes to handle this heavier work, as well as larger housing bodies. Three-stage blowers are usually self-propelled due to the power the accelerator and auger lend to forward movement, although some do come with a rear-wheel-drive system. 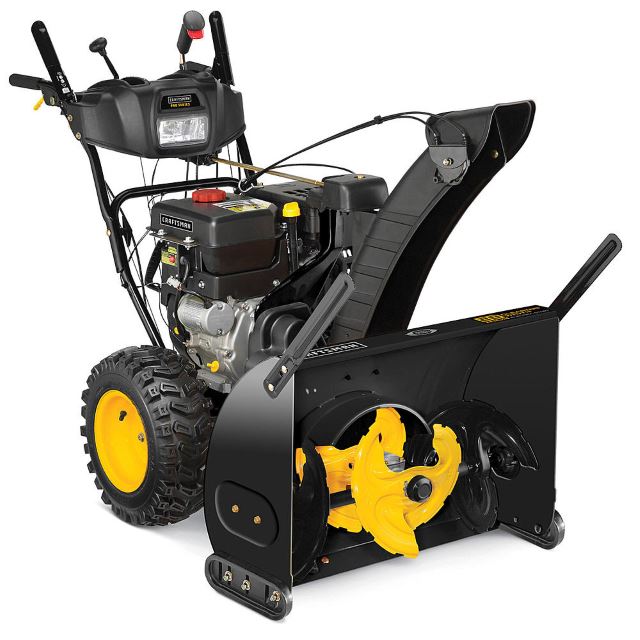 This unique design helps throw snow 50 feet or more, which is especially helpful when faced with wide driveways, or large snowfalls to avoid snow pileup. You also are able to increase your work efficiency by up to 50%, meaning you can get the job done in half the time of lesser design models.

The auger driven system combined with the accelerator is super powerful and pulls the machine forward with ease, making your work less, and essentially enabling you to simply guide it to where you need it.

The massive housing sizes also mean deeper snow piles, drifts, or icy buildups can be removed in one pass, opposed to multiple passes. This efficient design also cuts down on overall maintenance since it can move more easily through the machines, leaving behind less buildup on the augers and impeller, as well as your driveway.

Because of the complexity of the design, a three-stage system requires not only 4-cycle, gas-powered engine maintenance, but usually needs to be worked on by a professional if anything goes wrong. Plus, many of the designs are auger-driven only and do not include reverse gears, which could become problematic in some situations and impedes overall maneuverability.

Although generally easy to control, the balance of the machines can sometimes cause them to ride up onto the snow, requiring your weight and energy to keep it cutting into the snow.

They almost always are specific to more professional use, with fewer model choices available overall, and few for use residentially. Plus, due to this commercial marketing, the costs have a tendency to be much higher than comparable dual-stage designs.

When Is a 3-Stage Snowblower a Better Choice? 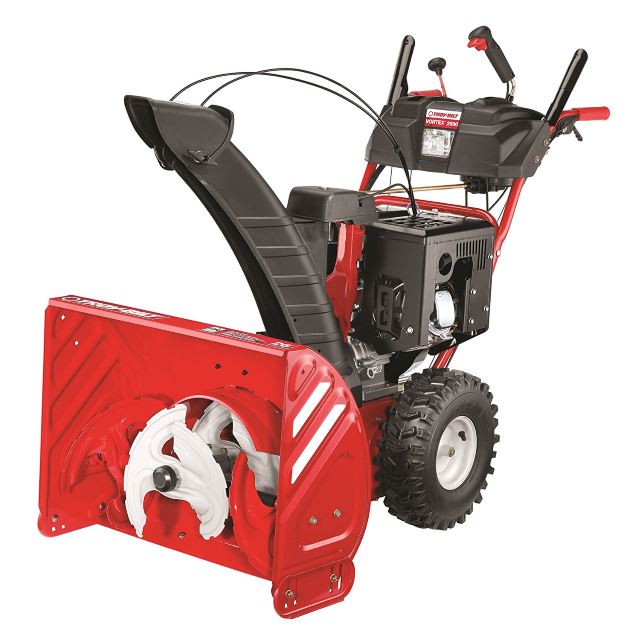 Whether you have a huge property or run a snow blowing business during the winter, buying a three-stage snow blower makes more sense than investing in a smaller, more limited, two-stage blower.

There are many more reasons why a three-stage blower can be better than a two-stage snow blower. These are simply the most common reasons you should consider investing in a bigger snow blower.

Which 2-Stage or 3-Stage Snow Blower Is Right for You?

When considering the purchase of a powerful snow blower model, you should research the differences between the dual-stage and three-stage models to see which is best for your particular situation. Three-stage series are almost exclusively built for serious snow removal and are more popular with commercial businesses, and usually carry the price tag to match.

Dual-stage designs have a larger variety to choose from, including smaller, compact models. This includes a wide range of more professional choices to span the many needs of a larger audience of those looking to move snow quickly and efficiently. Because of its greater degree of model choices, ease of maintenance, and power for all but the absolute worst of packed, icy snow.

The Best Lawn Fertilizer for Your Needs

Scroll back to top
132shares