10 Types of Axes and Hatchets - Backyard Boss Skip to content
We are reader supported. External links may earn us a commission. 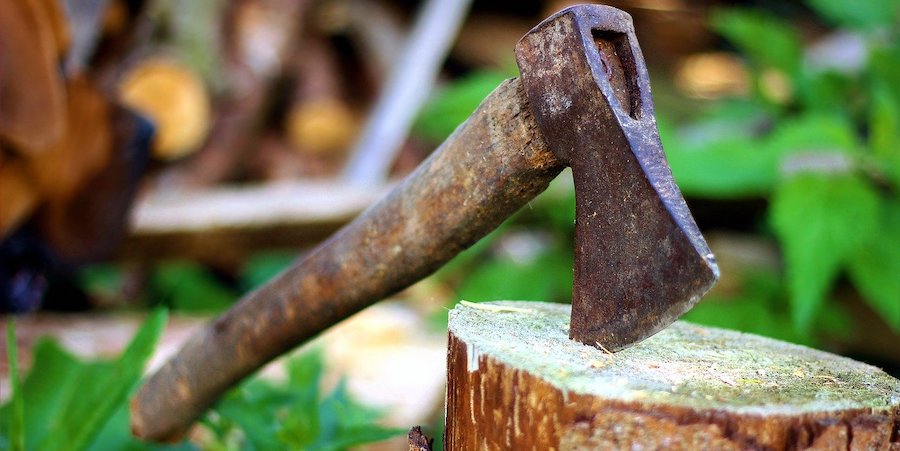 The axe has been part of the human experience for almost 50,000 years. It’s been used for all manner of chores from felling trees to hunting to rescue operations. The axe is ubiquitous with folks that are serious about the outdoors for a reason. Swinging an axe with confidence and precision will make anyone feel awesome. The right axe for the job makes many backyard chores a breeze. The wrong axe for the job, however, will just lead to frustration.

Over the last 50,000 years, axe’s have gone through a huge range of changes. And nowadays, there are specific axes for specific jobs. Luckily, we know all about axes here at Backyard Boss. We’ve gone through the trial and error that comes with finding the appropriate axe for the job, and compiled this list so that you don’t have to waste time doing the same.

The word ‘axe’ and ‘hatchet’ are often used interchangeably, but this is incorrect. The truth is that a hatchet is a smaller tool designed to be used with one hand. While an axe is larger, longer, and designed to be swung with both hands. With that out of the way, let’s take a look at some different axes and hatchets available today.

One of the most common axes is the felling axe. It was designed to cut down trees. The long, wooden handle gives the user the leverage to generate the power they need to fell trees. The sharp, thin axe blade helps to cut across the grain of the wood. So when felling a tree, keep this in mind and make sure to swing the axe sideways (horizontally). 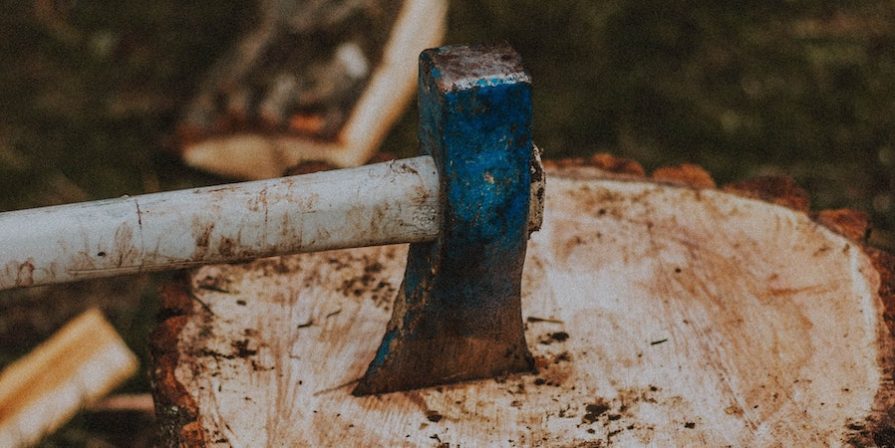 Another axe that’s common in backyards around the world is the splitting maul. It’s designed for splitting logs. The overall design is similar to the felling axe. However, it’s much heavier than a felling axe to give you added power when splitting a piece of wood. In fact, one end of the axe head looks like a sledgehammer.

The axe head resembles a wedge, with a sharp edge flaring out towards the blunt end. This aids in splitting wood with the grain, so make sure to swing in a downward action. The shape and weight of the head are what does the wood splitting, so no need to keep that blade razor-sharp.

The tactical axe is more a weapon than it is a tool. It is used by law enforcement, military, private security, and survivalists alike. It’s lighter and smaller, and different manufacturers have added a plethora of add-on features to their tactical axes. They are excellent camping tools because you can chop, dig, cut, and use them as a general tool around the campsite.

The pickaxe is a useful garden tool used for digging large holes in hard earth. The axe head of a pickaxe has valuable elements on both sides of the head. One is a pick, often curved, used to penetrate solid earth. The other looks more like a chisel or a narrow spade and is helpful once you’ve used the pick to loosen the area.

The fireman’s axe is a vital emergency tool for ships, factories, oil rigs, and other similar situations. There’s a blade on one end of the axe head and a pick on the other. It helps to puncture and cut through bulkheads for escape purposes. The axe handle is often long (some might have short handles depending on the space in which they’re kept), with a heavy head, and are brightly colored.

The intended use of a crash axe is similar to that of a fireman’s axe, but the design is slightly different. Crash axes are found in the cabins of airplanes. They’re used during an emergency to cut away cabinets and sheet metal to gain access to a fire or rescue passengers. The biggest difference is that they have shorter handles, so they can still be used in tight situations.

A tomahawk is a general-purpose tool that originates with Native Americans. Tomahawks are usually smaller than most axes, so they may be termed hatchets. Native Americans used tomahawks for a whole range of tasks, from chopping and cutting to hand-to-hand combat. The tomahawk has a straight handle and is much lighter than other hatchets and axes to make them easy to throw. In modern times tomahawks have become popular with campers due to their general usefulness.

Most throwing axes are, in fact, hatchets. Have you ever seen somebody throw an axe with two hands? The throwing axe was popular in the Middle Ages as a combat weapon. They are the European equivalent to the tomahawk. The short handle and well-weighted head make this an easy weapon to carry around. The dimensions of these tools are important because they will affect the way the hatchet moves through the air towards your target.

The double bit axe is essentially two axes in one. The head has two blades, one on either side. The axe head is often designed for different uses. One blade might be thin and sharp for felling trees, while the other is blunt and heavy for splitting wood. These axes aren’t that popular anymore due to the heavy head.

We couldn’t do an axe round-up without including the largest of the lot. Battle axes are ancient weapons that have been used across the world in combat scenarios for centuries. These axes range from 1 foot to up to 5 feet. Anything over 5 feet becomes a polearm. These axes often have large, sweeping blades that aren’t useful for much besides close-quarters combat. And even in that scenario, they’re not exactly the most nimble of weapons.

There are many different types of axes and hatchets for different scenarios and uses. If you choose the best axe for your intended use, the tool will make your life much easier. Over the years, the intended use of axes has evolved from self-defense and survival to rescue operations and sport.

Which is your favorite type of axe or hatchet? Comment below and let us know.

Definitive Guide to the Top Hand Saws in 2020

How to Use Grow Bags to Harvest Vegetables With Minimal Space