The Many Types of Firewood: A Guide to What to Burn (And What You Shouldn't) - Backyard Boss Skip to content
We are reader supported. External links may earn us a commission. 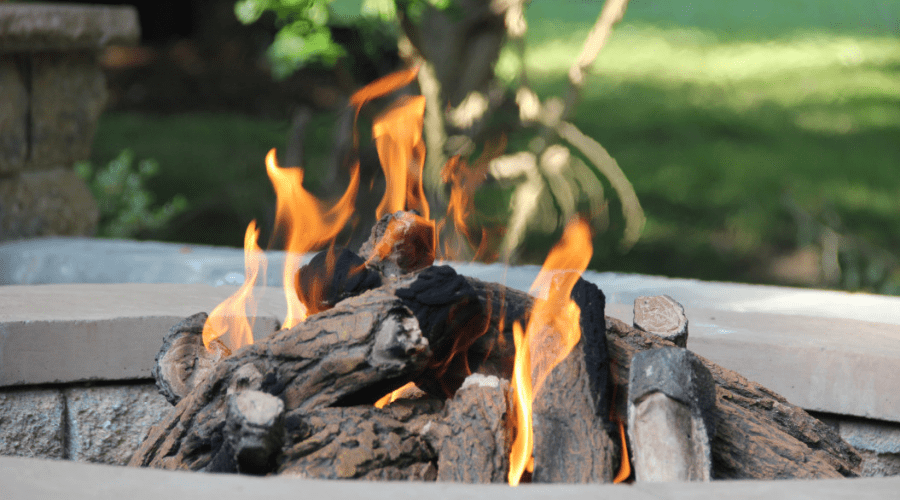 Are you new to using wood heat as your primary heat source? If so, understanding the different types of firewood and what’s best to burn is crucial. From hardwoods and softwoods to pellets and treated wood, we cover everything you need to know about types of firewood in this article.

The Many Types of Firewood: An Alphabetical Guide

Hardwood varieties are the most valuable types of firewood. While softwood is often preferable for building lumbar, hardwood is much denser and thus burns longer in a fireplace, pit, or stove.

Here are the main hardwood types of firewood.

Alder is low-quality firewood. Regardless of how quickly it burns and how little heat it throws off, in comparison to other hardwoods, Alder is better than many softwoods for heating purposes.

Apple is a hardwood that is very good for heating. It burns slowly, puts off high heat levels, and even smells great. Sometimes Applewood is known to spit a bit or even sparkle while burning. It is important to note that Applewood requires at least a couple of years of seasoning to burn optimally.

Among the best hardwoods to burn period is Ash. Whether heating your home, BBQing, or having a bonfire, Ash is a goto hardwood. The fact that it can be burned just fine while still green, due to low moisture levels, makes it highly sought after. That said, seasoned Ash, of course, burns longer and hotter than when still green.

Beech is another hardwood suitable for burning and heating. However, it requires a bit longer seasoning time than many firewood types because of its high water levels. Also, Beech is known to spark when burned.

One of the most versatile hardwood types of firewood is Birch. This sort of wood can even be burnt and used for heat without being seasoned first. However, Birch works best when mixed with slower burning firewood (like Oak) because it burns pretty fast. The bark of Birch is also valuable for wood-burners as it makes a tremendous fire-starting material.

A hardwood known for putting off intense heat with very little smoke, Blackthorn is a slow-burning firewood type. It is great for fireplaces, wood stoves, and any other indoor wood-burning systems. Blackthorn is also a lovely campfire wood.

Many firewood users rate cherry as low quality, mainly because it spits when burning. If seasoned correctly, though, Cherry is a good hardwood for wood heat. It burns medium to slow, puts off a reasonable amount of heat, and best of all, it smells delightful.

This type of firewood should be used as fuel for woodstoves and fireplaces only as a last resort. It burns relatively fast as well as putting off a ton of smoke. Compared to other options on this list, it is of low quality.

Another hardwood type firewood that needs to be seasoned extra-long, Elm has a relatively high water content but is generally considered a good wood for burning. Besides seasoning for an extended period, Elm does well when burned with quick-burning hardwoods (like Birch). At any rate, this hardwood throws off decent heat levels and doesn’t burn quickly at all.

One type of hardwood firewood that puts off minimal smoke, creates large amounts of heat and isn’t going to break the bank is Hawthorn. It is typically thought of as good firewood, even though splitting it can be a bit of a pain as it is rarely straight as other types of firewood tend to be.

A sometimes overlooked source of excellent woodstove fuel is Hazelwood. Another high-quality hardwood that comes strongly recommended for burning into, the wood puts off less smoke than most hardwoods, burns quickly, and doesn’t spit.

This type of hardwood is yet another excellent type of firewood that can burn while still green. It burns even slower and hotter when appropriately seasoned. All in all, Holly is known as a good source of fuel for fires.

A less popular type of firewood than many, Hornbeam is known to burn well, put off good heat, and spit very little. Even though it isn’t the most common, it is considered a good quality fuel source for wood stoves and fireplaces.

Out of Chestnut’s different species, Horse Chestnut is one of the lowest quality hardwoods for burning. It does put off heat, and it is better than many softwoods; however, it spits a great deal and doesn’t compare with other hardwoods for indoor firewood.

Another of the less popular types of firewood for heating homes, Lime, is the lower-quality hardwoods on our list. That said, it is burnable and is worth splitting and stacking for fuel if you find a good deal. It is also a great type of firewood to mix with other hardwoods.

Aside from being a top pick for making furniture, Hard Maple is one of the best hardwoods to use as firewood indoors. The wood produces a minimal flame, little smoke, large amounts of heat, and burns extremely slowly compared to other wood. Hard maple that is seasoned for two or more years burns the hottest, longest, and produces even less smoke.

Perhaps one of the most popular types of hardwood, period, Oak is also one of the very best and high-quality varieties of firewood one can get their hands on. It burns slower than most and therefore produces a longer-lasting source of heat. One of Oak’s most notable features as firewood is that it can be burnt in much smaller pieces than typical firewood and put out equal or greater heat.

Another hardwood that works well as firewood, Pear, is just as frequently overlooked as some of the other less popular hardwood types mentioned previously on our list. Pear is generally considered good quality firewood that smells excellent, doesn’t spit, and otherwise burns well and puts out nice heat levels. That said, It does need to be seasoned well before burning, though.

Rowan is an excellent firewood if it is available in your area. It is generally easy to split and stack, burns well, and throw off decent heat levels. Rowan smokes less than some of the wood on our list and also rarely spits when seasoned.

The second type of Chestnut, Sweet Chestnut, is low-grade firewood that is not preferred for indoor use. Sweet Chestnut burns well only when properly seasoned, but it is known for spitting much more than other woods. When used in campfires, this wood sends copious amounts of sparks flying.

Good firewood for burning, especially when mixing with other types of firewood, Sycamore creates less smoke and sparks than most wood on our list. However, the amount of heat that it puts out isn’t as high as many firewood types.

Lower quality firewood than most hardwoods, Walnut is not very ideal for an indoor heating source. Other than for use while camping or BBQing, Walnut is one type of firewood you may want to pass up on (especially if you’re paying for it).

Willow has one of the highest water contents out of the most well-known types of firewood. For that reason, it needs to be seasoned longer than many hardwoods before it is burnable at all. Once hardened, Willow burns well and throws off ample heat.

A low-grade type of firewood, Yew, is another hardwood species that does not make an excellent fuel source for indoor wood heating systems.

Due to high resin content, many softwood types are much less suitable than hardwoods as a primary source of fuel for indoor heating. Some species of softwood, however, are nonetheless sought after as firewood.

Here are some of the most common types of softwood used as firewood.

Cedar, one of our favorite softwood types to use as firewood, creates considerable amounts of heat with very little flames. It burns well, both seasoned and unseasoned (if burning small pieces), and doesn’t spit often. The best part of Cedar as firewood? It smells heavenly.

A generally lousy softwood to use for firewood, Douglas Fir smells great but doesn’t put off very much heat. It also throws off the extremely little flame.

Larch is a common softwood that works well as firewood but only seasoned for long. However, Larch is not recommended for indoor use as it is known for excessive spitting and creates large amounts of soot in fireplaces and wood stoves.

This super common softwood is highly resinous and leaves quite a bit of soot when burned indoors. Aside from campfires, pine makes good kindling for helping start fires.

Poplar is one of the least popular types of softwood to use as firewood. It burns slowly, puts off little heat, and produces thick black smoke regardless of how long it is seasoned.

Another well-known type of evergreen softwood that is burned often is Spruce. That said, it is relatively low quality. Spruce makes better camp firewood than anything but also works as indoor kindling in a pinch.

Old-fashioned firewood isn’t the only source of fuel for wood-heat anymore. Today, wood pellets are all the rage. These pellets consist of heavily compressed wood materials (often recycled wood).

Pellets have a much lower moisture content than regular wood due to their compressed nature. That means they stay drier, burn hotter, and produce high levels of clean heat. Also, wood pellets also emit fewer pollutants than other fuel types used for heating.

Pellets are available in a variety of consistencies, including softwood, hardwood, and mixtures of both. Softwood pellets burn hotter than hardwood pellets due to the high amount of lignins, increasing heat levels when ignited.

Compared with traditional firewood, pellets are an enormously effective source of fuel for heating systems like wood stoves. They are also much easier to handle and require a great deal less space than stacks and racks of firewood. A single bag of pellets weighs between 5 and 50 pounds.

A few of our favorite pellet manufacturers include:

As tempting as it may be, especially when dealing with wood scraps, discarded pallets, and leftovers from building projects, treated wood should not be burned. Period.

Mostly indoors, treated wood is dangerous to burn for heat. It should be avoided in fireplaces, wood stoves, and even campfires.

When burned, harmful toxic chemicals are put off with the smoke and ashes. This is why avoiding being around smoke, let alone breathing it, is best from treated wood.

If you have leftover treated wood building materials, do not mix it in with your kindling or firewood. Instead, try to find an additional purpose for it (even if it means having a stack of treated wood in storage, giving it away, or starting a new project). 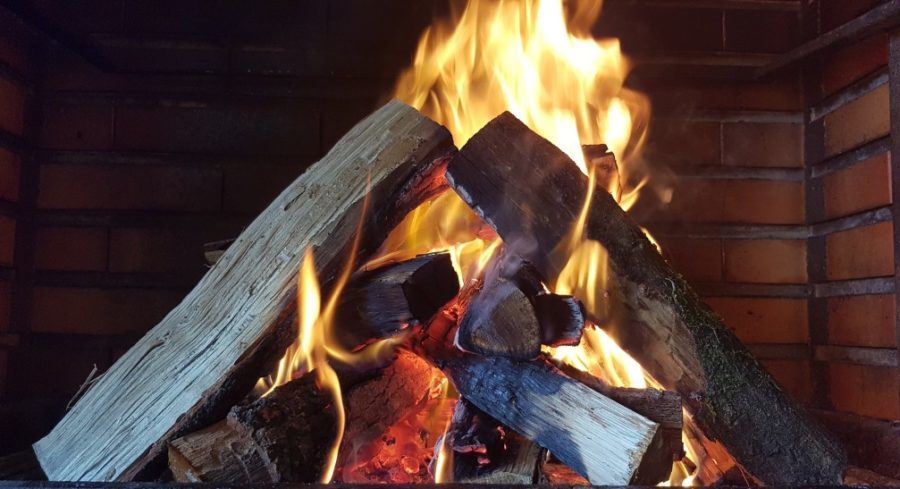 Other Firewood Guides We Have

Here are a few other types of firewood we have guides on that did not make it into this list:

A Final Word About Types of Firewood to Burn

With all the different firewood types available today, it can be a real challenge selecting the best one for your fireplace, fire pit, or wood-burning stove. Hopefully, our guide helps you make the most well-informed decision possible when it comes to stocking up on firewood for this year.

If you’re using firewood for the first time, you should also research and invest in the best firewood rack for your home.

What type of firewood do you prefer, and why? Let us know in the comments section below. Good luck with your firewood!