8 Types of Hammers - Backyard Boss Skip to content
We are reader supported. External links may earn us a commission. 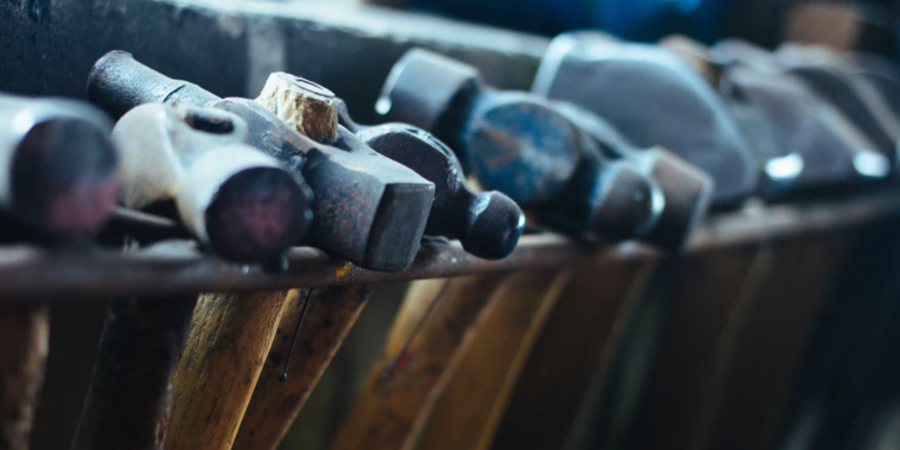 The hammer is one of the oldest and most common tools in the entire world. With the first hammers being used millions of years ago, they have been an essential part of human evolution. Because of this, they have evolved into all kinds of different forms and are available for different uses.

There is a wide variety of hammers available on the market, and all of them have the specific use that is unique to them. Knowing what different types of hammers are for and how they can be used to make jobs easier and more convenient is a great way to find the best hammer for your specific purposes.

In this article, we have laid out some of the most common hammer types and what they are used for so you can choose wisely. 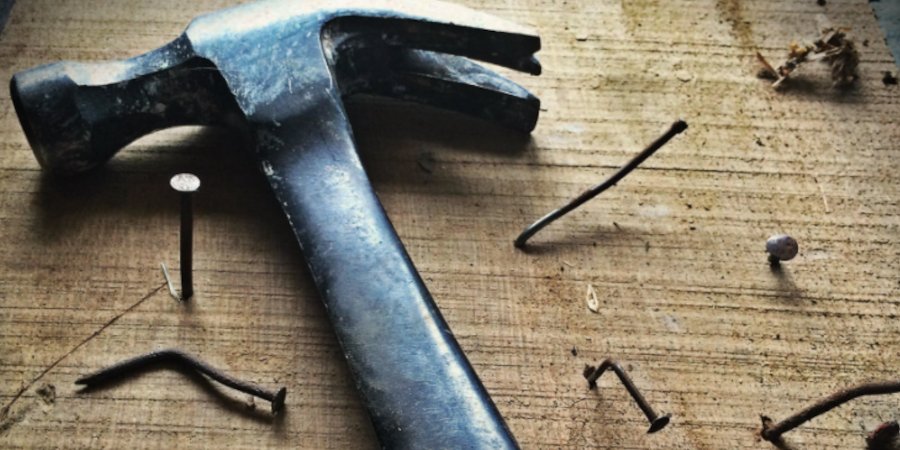 Claw hammers are named as such because they have a curved claw end on the other side of the striking end. It is used to pull out nails and pry apart boards or anything else that needs leverage. Claw hammers are one of the most common types and can be found on almost any job site.

They were developed to pull old nails out of wood that was being reclaimed. During metal shortages, craftsmen would dig nails out of disused wood and reshape them for future use.

Club hammers cover most tools that are meant to have the most driving power. They have two flat ends that can be used equally to distribute force. Sledge Hammers and mallets fit into this category due to their use in heavy driving and high-impact jobs.

However, some club hammers have less impact on the surface they are hitting. Joiner’s mallets, for example, have a wide surface area that pushes the force outward and prevents dents and gouges.

Ball-peen hammers have small, rounded heads that can be used in metalwork and other jobs that require a high amount of precision. The size of the heads makes them a perfect tool for applications where the user needs to be in complete control.

The name ball-peen hammer comes from a method used in metalwork called peening. In this technique, a worker will shape the metal by banging it lightly until it starts to curve in a concave or convex pattern.

Standard claw hammers are probably the most common type that you will see in any tool box. They usually have a wooden handle and are flat on one end for driving nails and have a claw on the other end for pulling out nails or prying things apart. They usually come in a wide variety of colors and weights.

For the most part, you don’t want a claw hammer to weigh more than two pounds. Most standard claw hammers are about one pound, which makes them light enough to swing for hours on end without getting tired. They are also long enough to get quite a bit of leverage on.

Their name comes from the fact that they are used primarily by metal machinists. Their rounded head allows them to form sheet metal along a curve and create intricate bends without making dents.

Sledge Hammers are some of the largest hammers available on the market. They are generally used for heavy-duty projects like driving stakes into the ground or driving large fasteners. They feature a double flat head that can be used the same on either side. This is so the user can flip the hammer around as they make a swing and get more power behind their drive.

Sledge Hammers feature long handles to get the most possible leverage on a swing. Because of this, they are often used for breaking up concrete or for doing demolition in buildings that need to be torn down. Anytime you need to get a lot of power behind a swing, a sledgehammer will be the perfect tool.

Tack hammers are unusual-looking since they have a long, thin square head that is relatively lightweight. The heads are almost claw-like because they taper down from a wider middle base to a smaller end. They are most often used as an upholstery hammer and for jobs that need quite a bit of accuracy.

One of the ends of a tack hammer is magnetized to hold the tack in place as it is driven. Once the tack is put in place, it is then finished off with the unmagnetized end. It makes driving several small tacks or steel pins one after the other easy and incredibly accurate.

Rubber mallets are common since they can produce a lot of power. However, the blow is quite a bit softer. They feature large, wide heads that are made out of hard rubber. It allows them to come down hard on an area without creating a gouge or dent in whatever you are hitting it.

Solid rubber mallets are most often used in delicate woodworking where you do not want to leave any marks on the actual wood. They can be used for driving joinery together. It’s because they produce a blow that is heavy enough to bring the pieces together without cracking any delicate wood.

Framing hammers are used for the sole purpose of building house frames. They are efficient machines in that they are very light and have a straight claw. The head of the hammer is waffled, which makes it less likely to slip off the head of the nail once it hits it.

Framing hammers are designed to be used for hours on end without wearing out your arms or hands. They often feature rubber handles that help absorb vibrations and make the process much easier on your body. This, combined with its lightweight construction is perfect for people who need to do a lot of nailing all in one session.

Drywall hammers feature straight heads that are flat and have a notch for holding nails on the bottom. This notch makes it easier to place nails without damaging the drywall, and the incredibly flat head makes it less likely that you will produce a dent in the paper as you drive the nail into the drywall.

They also feature a hatchet end that is meant to be used for cutting away excess pieces of drywall. Drywalling is an incredibly skilled and delicate process that requires the use of tools that are accurate and specifically designed. This hammer is a great example of that.

A finishing hammer is a great tool for doing small, intricate woodwork with small nail heads like trim nails or in situations where nail guns would not be ideal. The small, lightweight head is perfect for delicate materials and things that need a lighter hand.

Finishing nails generally have a small, thin nail head that can be difficult to strike without bending. In these instances, the materials and fasteners need to be driven in with something that won’t damage the surface, and a finishing hammer is a perfect tool for this.

Things to Consider When Picking a Hammer for Your Project

When considering types of hammers for your project, there are a few things that you should keep in mind. It is always best to have a wide range of tools to choose from, but if you know what job you need to do, you can pick the best suited for it. Hammers are a relatively simple tool, but there are differences in design and application.

The type of hammer you choose will also depend on the weight needed to get the job done. If you use a hammer to break up a brick or stone, you should have something heavy enough to produce the right amount of force. However, if you drive many small nails, something lighter like a finish hammer will be more appropriate. Plus, you can save yourself the work it takes to swing a heavier tool all day long.

The materials that are used in a hammer are also crucial. The head has to be harder than the striking surface to get the most out of it. Consider also how much you are going to use it. If you plan on using the hammer multiple hours a day on most days of the week, a steel or hardwood hammer is going to last you a lot longer than fiberglass.

Hammers for a Variety of Tasks

No matter what kind of project you are doing, there is a hammer to help you get it done. When you know what options you’ve got, it’s easier to choose the most suitable tool.

Remember that you can always collect hammers, so you can choose the tool that is the most suitable whenever you need to start a different project.

Do you have a hammer type that you use all the time and love? Let us know about it in the comment section below!

How to Plant and Grow Cabbage in Your Vegetable Garden

The Best Hand Tillers to Keep Your Soil Ready for Planting

Scroll back to top
11shares