Why Do the Ends of My Tomatoes Stay Green? - Backyard Boss Skip to content
We are reader supported. External links may earn us a commission. 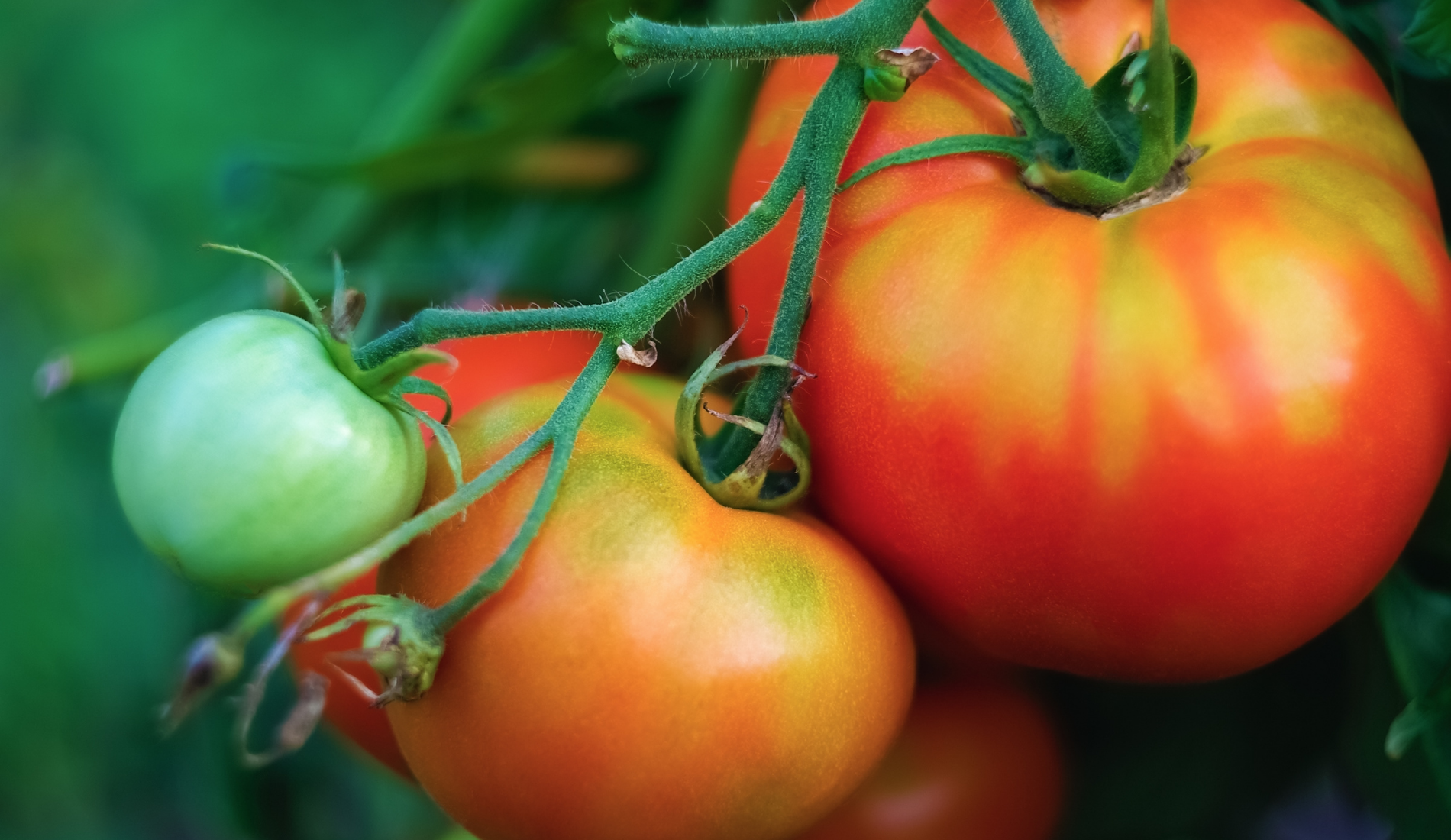 Tomatoes, though botanically categorized as fruit, are remarkable vegetables. Not only are they a superfood rich in vitamins and minerals, but tomatoes are also incredibly easy to grow and remain a productive plant. Tomatoes are heat-loving plants, and their seedlings thrive under strong and direct light.

It is a tomato lover’s dream to grow firm and juicy tomatoes that bear consistent color, and while some harvests accomplish the former, two consistent colors may be a problematic aspect. Why do tomatoes get green or even yellow shoulders? How can you prevent this discoloration? Read on to learn more about this ripening issue.

Coming Across Green and Yellow Shoulders on Tomatoes

Green or yellow shoulders refer to green or yellowish discoloration on a tomato, particularly at the stem end. This part remains firmer than the rest of the ripened fruit and is easier to spot in tomatoes that turn red, orange, or yellow when they ripen as opposed to green tomato varieties such as Aunt Ruby’s or Green Zebra. Some tomatoes, such as Cherokee Purple remain green at the stem ends when fully ripened. Other than feeling firmness, another way to determine green shoulder is by biting into that area as it won’t taste as sweet.

Some tomato varieties are green or yellow when ripe! These green and yellow tomatoes taste and feel as good as a ripe red tomato. Most green and yellow tomatoes are heirloom varieties and when ripe, have vertical stripes or other variations in their coloring. They are meatier with heavier flesh and will feel soft when pressed. Their taste is similar to a red tomato but slightly sweet or spicy, depending on the variety. Popular green tomatoes include green zebra and Cherokee green, and popular yellow tomatoes include lemon boy, Earl of Edgecombe, and dixie golden giant.

There are two causes of green shoulders. One is improper temperature, which inhibits lycopene development. Lycopene is a plant pigment that gives tomatoes their red color, and the ideal temperature for its development is between 65 and 75º F.

Lycopene production is inhibited if temperatures rise above and stay at 75º F. Although tomato plants can tolerate higher temperatures than 75º F and like exposure to the sun, their fruits are a lot more sensitive. The upper portions of tomatoes usually get the most exposure to the sun or heat as they grow, which raises the temperature in the fruit. This hinders lycopene development, and if these conditions are sustained, the exposed portions stay green.

The second cause has to do with chlorophyll. Chlorophyll is a pigment that gives plants their green color, and excessive heat prevents chlorophyll from breaking down. So whilst tomatoes ripen in the sun, their upper portions hold on to the chlorophyll, and if lycopene is inhibited, it makes the green discoloration more pronounced.

Yellow shoulders are linked to carotene, which is another pigment in tomatoes that produces orange and yellow. Despite it not being as sensitive to sunlight and heat, when temperatures rise, the carotene is prominent over the lycopene which is responsible for the red pigment. The upper portions of the fruit will appear yellow-orange or yellow-white while the lower portions are ripened and bear a fuller color.

How to Eat a Tomato With Green or Yellow Shoulders

Tomatoes with green and yellow shoulders are perfectly fine to eat. However, the affected area is usually tough and bitter. Go ahead and cut the discolored part off the tomato and enjoy the ripe part as you normally would.

Tomatoes that already have green or yellow shoulders cannot be corrected, so it’s best to prevent discoloration in your next harvest. Luckily, there are ways to prevent these shoulder problems before they occur.

Pruning tomato plants is optional and an aesthetic choice for the most part. Some gardeners cut back on some leaves to keep the plant tidy or manipulate fruit size. By minimizing pruning, you give your tomato fruits more coverage. The foliage on a tomato plant that is more accommodative of the heat can shield the tomatoes as they ripen. If you want to prevent ‘tomato clutter’, you could learn how far to plant them so you wouldn’t need to worry about pruning.

Partially shading your tomato plant, especially in high heat, can maximize photosynthesis and reduce heat build-up in the plant. One way to shade is by planting your tomatoes in areas around your garden where natural shade is created during the day. You can plant them next to an east-facing wall, so they receive full morning sun but remain protected from the harsher afternoon rays. For a temporary solution, you could put up a shade made of cloth, and depending on the coverage the plant needs, you can adjust the density of the material.

Hybrid tomatoes are the result of intentionally cross-pollinating two different varieties of tomato. This results in a plant that is very hardy, disease-resistant, and produces fruit that is consistent in size and shape. Steakhouse tomatoes are a hybrid variety that is famous for their enormous size and touted as the largest tomato variety. Hybrid plants ensure that all the toil that goes into growing healthy tomatoes isn’t at the mercy of a pathogen.

Heirloom tomatoes are a variety that has been passed down within a family or has been around for at least 50 years. These vintage tomatoes have been selectively reproduced for certain characteristics, such as color or tolerance to certain weather conditions. These tomatoes often grow big, but their sizes are usually inconsistent and are incredibly juicy. They are also canned or bottled due to their high acidic content. Heirlooms such as Brandywine varieties are adored for their sweet taste and beefsteak shape.

Regarding green shoulders, heirlooms are more susceptible than hybrids, but that doesn’t mean you should avoid them entirely. Some purple or black varieties are more prone to green shoulder regardless of whether they’re hybrid or heirloom. You should read the labels on seed packets to see if they’re prone to discoloration or if they are resistant to hot climates.

To prevent green shoulders, let your tomatoes ripen off the vine by picking them early. This method is for extreme cases because you could mistakenly pick the tomato before it has fully ripened and compromise its flavor. The best time for early picking is when the red pigment starts peaking through the green. Once harvested, you can leave the tomatoes on your counter where they will continue to produce ethylene gas which will help them ripen. For faster results, place your tomatoes with fruits that produce ethylene gas, such as bananas or apples, to help speed up the ripening.

Ultimately, tomatoes with green or yellow shoulders have a pigment problem. Tomatoes exposed to sunlight and high temperatures may not ripen evenly. On one hand, you’d have high levels of carotene, which leave your tomatoes with yellow shoulders, and on the other, you’d have chlorophyll holding the upper portion of your tomatoes back from their full potential. Thankfully, this issue does not render tomatoes inedible. You are but a few tweaks and techniques away from perfectly colored tomatoes.

Everything You Should Know About Organic Vegetable Seeds

How to Build a Cold Frame

How to Anchor a Swing Set in Your Backyard: Your 11 Best Options