Why Mushrooms Are Growing in Your Potting Soil - Backyard Boss Skip to content
We are reader supported. External links may earn us a commission. 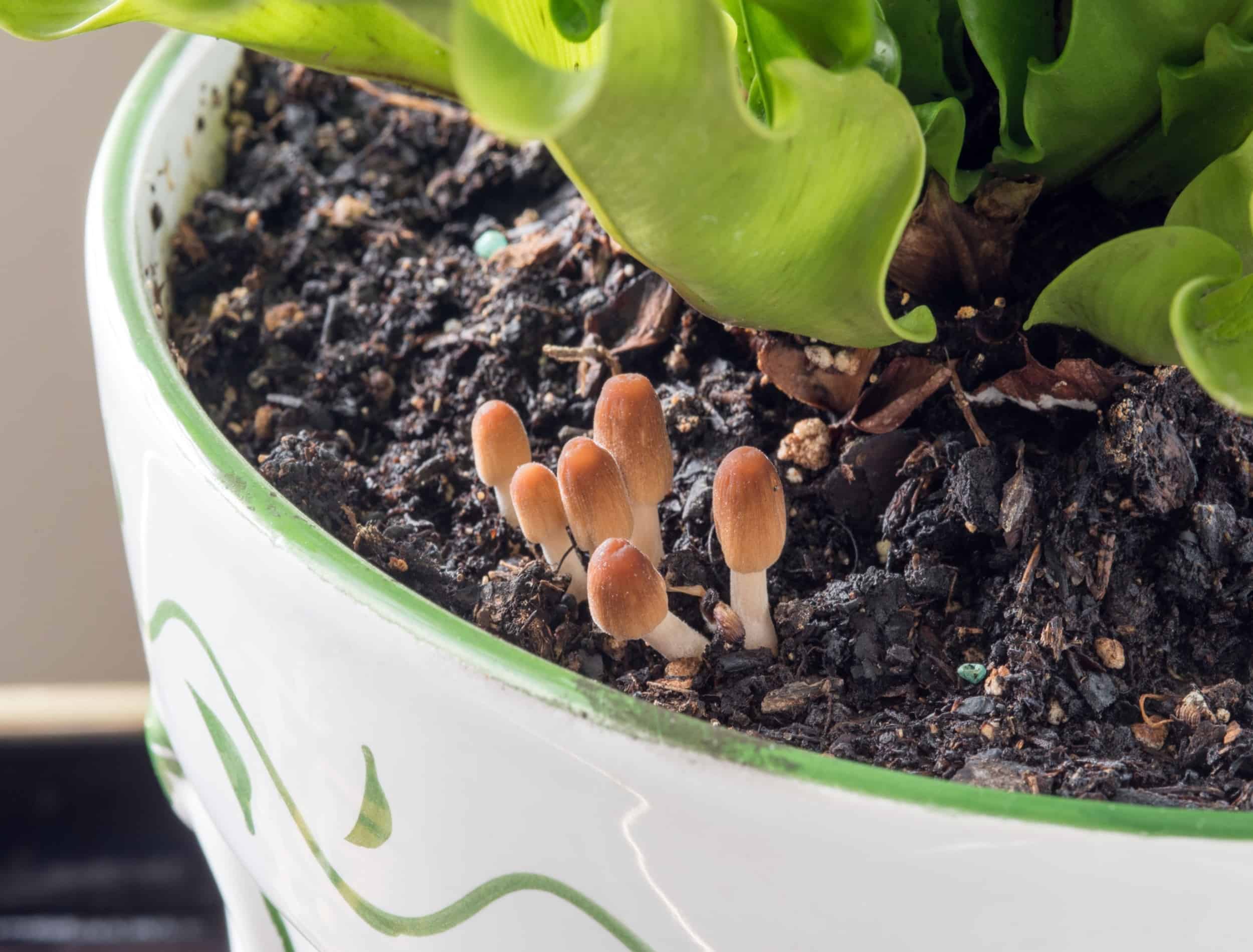 Since potting soils and potting mixes are sterilized to kill infection, diseases, fungi, and weed seeds, it can be confusing to see a cluster of mushrooms thriving in your potting soil. Mushroom is a fungus, but its spores are always floating around in the air. If these spores land on the soil or anything moist, they start to grow. There are a few reasons why mushrooms are growing in your potting soil:

That begs the question, can you use the mushroom-infested potting soil, or has the potting soil gone bad, and you should toss it out? Now worries, this detailed guide will help you understand the different kinds of mushrooms that can grow in potting soils, why they grow, and what you can do about them.

Mushrooms need a warm, moist, and humid environment to thrive. These fungi have a fascinating life cycle! They start as spores and end as the fruiting bodies we know them to be. The fruit bodies we see above ground are the product of the fungi once it is at the end of the life cycle. Mushrooms release billions of spores, which are carried and spread by wind or water until they land on grounds with ideal conditions for them to thrive.

Then the spores germinate into hyphae, which are the fibers that the fungus uses to take in food. The strands of hyphae continue to combine into a colony known as mycelium; this is the form the fungi stays in for most of its life. Mycelium feeds off organic matter and then grows into hyphal knot growth once it’s ready to produce mushrooms. There are two types of mushroom fungi you should look out for in your potting soil;

Fortunately, most mushrooms that grow in potting soil are saprophytes. They’re harmless and don’t pose a risk to your plant. Moreover, mushrooms are a sign of healthy soil.

This is the most common mushroom growing among houseplants. Distinctly yellow, this parasol mushroom can grow up to four cm in height and has a maximum cap spread of five cm.

It is also a saprophytic mushroom, meaning it breaks down dead organic matter in the soil and does not harm living plants. The ‘plant pot dapperling’ is not edible and can be highly toxic if consumed.

Also called the lawyer’s wig for its white and shaggy fruiting body, this Coprinus genus is largely a saprophytic species because it feeds off of decomposing organic matter, both animal and vegetal. It is edible and is said to taste like asparagus, however, you shouldn’t consume it with alcohol.

It is because some of these mushrooms can contain coprime, which, when mixed with alcohol, can cause nausea, vomiting, and sweating, among other nasty symptoms.

When You See Mushrooms in Your Potting Soil, What Should You Do?

Mushrooms are a sign of healthy soil. As long as you don’t consume them, they’re harmless and can be ignored. That said, you can pull them out, but that won’t do much as the issue lies in the airborne fungal spores.

Although the aforementioned mushrooms aren’t harmful to plants, they may ruin the visual appeal of your garden. Here are a few ways you could deal with this problem:

Mushroom caps house the spore-producing surface of the fruiting body, which can be gills, pores, ridges (fake gills), or teeth. By removing mushroom caps, you can prevent the spread and subsequent growth of new spores.

This solution is only effective if you remove the mushrooms as soon as you notice them sprouting. Prolonging the removal will give the mushroom enough time to release spores. You can pull the mushrooms out manually with garden tools.

2. Scraping and Sterilizing the Soil

You can scrape the top 5cm of soil and replace it with sterilized soil. Sterilize the soil on a glass or metal tray in the oven at 200 degrees F for at least 30 minutes or until the soil’s temperature reaches 180 degrees F. Be sure not to over-bake the soil as burnt or overheated soil can harm plants.

The issue with this solution is that the fungal spores may be deeper into the soil that hasn’t been sterilized and could regrow, even if the top portion of the soil is sterilized.

Changing the soil is a more thorough approach, however, it’s a more intensive process and could stress out your plants. Remove the entirety of soil and either sterilize it or replace it with new potting soil.

Remember to sterilize the pot or container you’re going to use by soaking it for at least 10 minutes in a premixed solution of one part bleach to nine parts water. Before transplanting, wash the plant’s roots as the spores may be present in the soil attached to the roots. Be delicate with this last step to prevent plant stress and transplant shock.

This solution isn’t recommended because it could affect your plants, especially if they require humidity, moisture, and certain temperatures to thrive.

By reducing the humidity in the air, soil moisture, and temperature, the spores won’t have the ideal conditions to sprout. However, if your plants and the mushrooms enjoy the same conditions, this drastic change could harm your plants as well.

5. Apply Fungicides to the Soil

According to the American Phytopathological Society, fungicides or antimycotics can help control the fungal disease by specifically targeting the fungus that’s causing the disease.

You will need to apply large amounts of fungicide for it to be effective, so apply it periodically until you no longer see mushrooms growing in the potting soil.

You can either make DIY organic gardening sprays or pick one online. Here are two of the best fungicides online that are guaranteed to help you prevent mushrooms:

Garden Safe is a best-selling ready-to-use fungicide/insecticide/miticide spray. Its fast-acting formula protects for up to two weeks. You can use this fungicide up to the day of harvest.

Garden Safe contains neem oil extracts and can help you control black spots, rust, and powdery mildew, apart from helping eradicate fungi. Before spraying it on mushrooms, remove the mushroom caps and spray on and around the base of its growth to stop it from growing again. 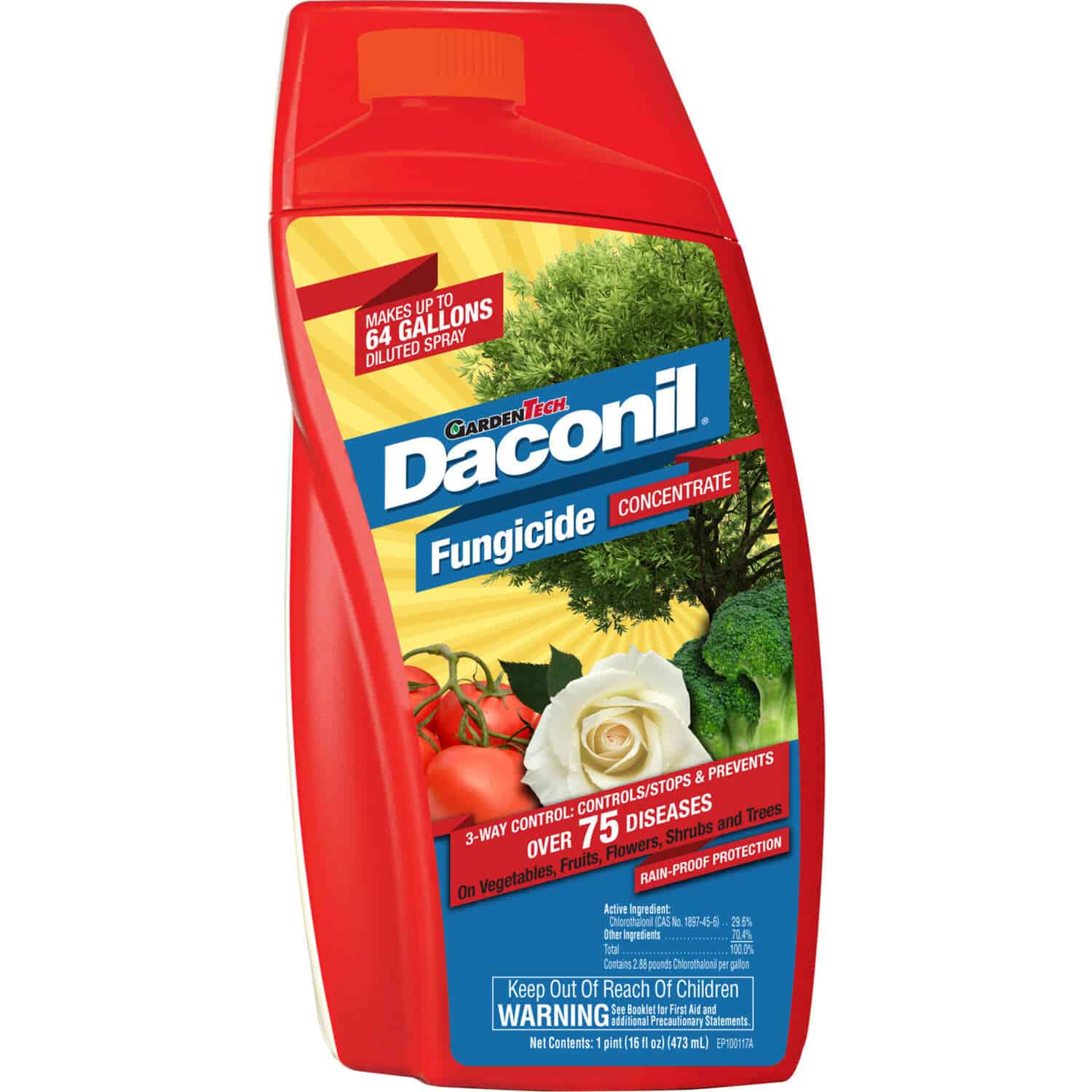 Sold as a spray, Daconil is a fungicide that claims to stop and prevent over 80 plant diseases. Apart from helping you get rid of mushrooms, it can control black spots, rust, blight, rot, and mildew, among other plant diseases.

You can use it on flowers, vegetables, shrubs, fruits, and trees. This concentrated formula makes up to 64 gallons of diluted spray.

Check Your Soil for Mushrooms

Mushrooms are fungi that release spores and grow in warm, moist, and humid conditions. They aren’t harmful to plants, but they are invasive and can ruin your plant’s appearance. That said, preventing or inhibiting mushroom growth can either be a short-term fix or an intensive process that could harm your plant.

If you prefer to apply fungicides to control fungal activity, our top pick is the best-selling Garden Safe Fungicide 3 because it’s ready to use, and its effectiveness is unmistakable.

Hopefully, this guide has helped you understand how this fungus replicates itself and the many ways you can intervene so that your greenery gets the spotlight it deserves! Let us know in the comments below if you have any questions, and don’t forget to share this article if you enjoyed it.

How To Keep Your Outdoor Christmas Decorations From Fading

How To Care For Your Lawn In a Drought

The Best Walk-Behind String Trimmers for a Spotless Yard

5 Shrubs You Can Plant in Late Fall

Scroll back to top
58shares