Why White Fungus Balls Are Growing in Your Potting Soil - Backyard Boss Skip to content
We are reader supported. External links may earn us a commission. 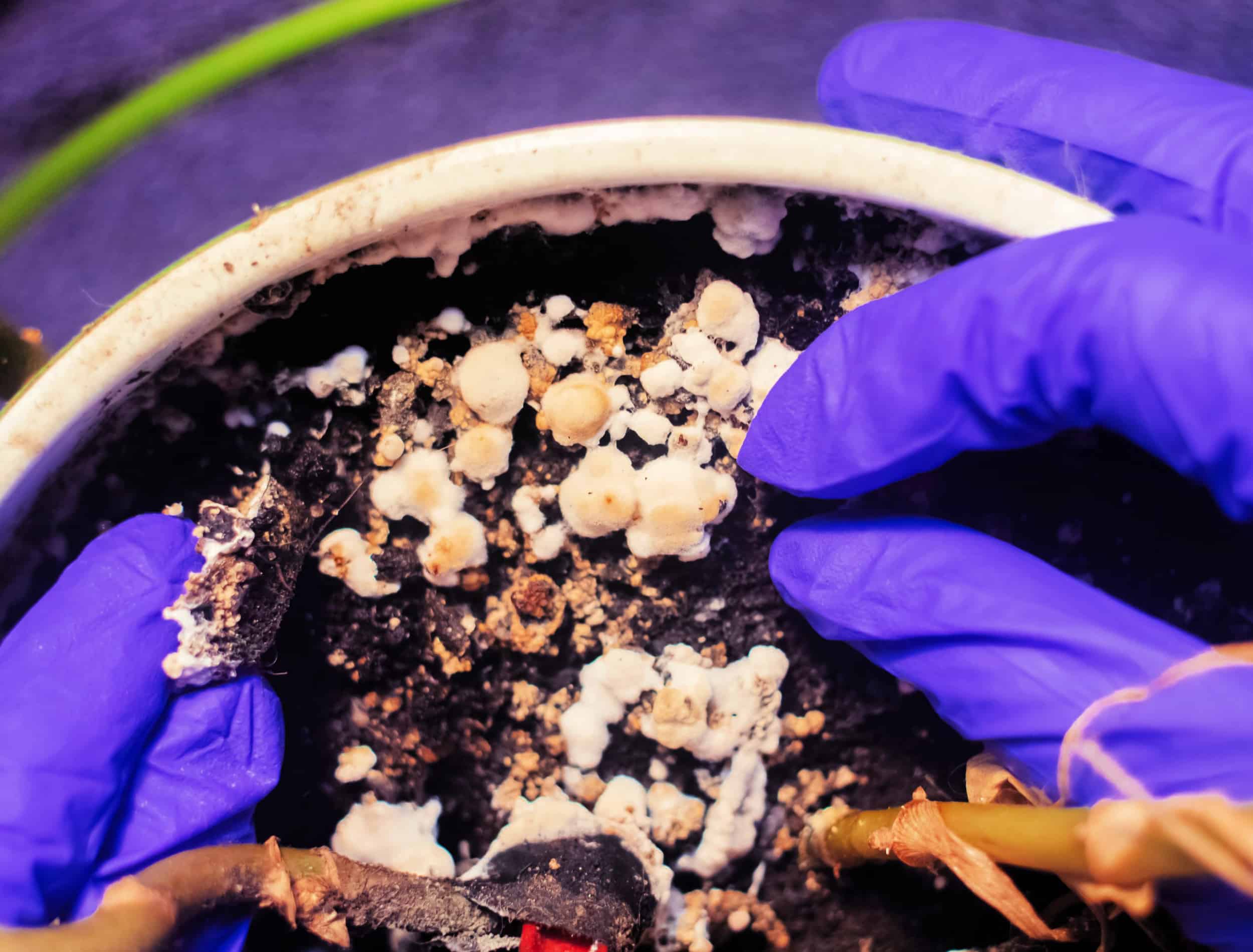 Have you been watering your houseplants lately and noticed little white fungus balls growing in the potting soil? Don’t worry; you’re not alone! These little guys are actually a common sight among gardeners, and they’re nothing to be alarmed about. Keep reading to learn more about these strange little creatures, what they mean for your plants, and how to get rid of them if necessary.

Which Fungus Is Among Us?

While there are a plethora of fungi and mushrooms in the world, there are two main types of fungus you’re likely to find in your potting soil.

Stinkhorn fungus is a type of fungus that often grows in soil. This fungus gets its name because it gives off a foul odor, which can be very strong, unpleasant, and attract flies. These fungi usually grow on decaying organic matter, such as leaves, and can be found in or around mulch.

When stinkhorn fungi start growing, they usually appear as white, egg-shaped structures. These “eggs” can be quite small or grow to be quite large. Eventually, they will break open, and a stalk will begin to grow out of them. The stalk is typically covered in a slimy substance that contains spores. As the fungus grows, the stinkhorn mushroom will start to form. The mushroom is usually green or brown.

Stinkhorn fungi are often considered to be a nuisance because they smell bad. However, they are typically not dangerous to humans or animals. Stinkhorns usually go away on their own. If you find the smell bothersome, you can discard the fungus by raking or scooping it out.

Mycelia aren’t technically balls, though they can look like them when living on top of your soil! To get technical for a moment, mycelia are the primary way that fungus grows vegetally; they’re composed of hyphae, which are long, branching filaments of cells. Mycelia are typically found in soil, on decaying logs, or the surface of other substrates.

The mycelia of a given species of fungus can vary significantly in size and shape. Some species form networks of mycelium that span several acres, while others form discrete tufts or patches that are only a few inches across.

Mycelia are generally harmless — or even beneficial since they can help break down organic matter in soil; however, they can sometimes hinder water from reaching the plant’s roots.

To get rid of mycelium, removing the fungus’s food source is important. Mycelium feeds on organic matter, so be sure to clean up any fallen leaves or debris around your plant. If your plant is pot-bound, consider repotting it in fresh soil. Another way you can help your houseplant is by replacing the top few inches of topsoil.

How White Fungus Got Into Your Potting Soil

One reason these tiny white fungus balls might appear in your soil is that you’re overwatering your plants. When soil is too wet, it creates the perfect environment for fungus to grow. Or, perhaps you’ve placed your plant in a very humid area, which is the ideal ecosystem for fungi.

If you find white fungus balls in your potting soil, don’t worry! These organisms generally don’t do any damage to your plants. However, they can sometimes be a nuisance if they start growing in large numbers.

So, there are a few things you can do to get rid of them. First, make sure you’re not overwatering your plants. Second, try removing the fungus from your soil. Finally, consider repotting your plant if you see any fungus deeper in the soil. To head off the problem in the first place, make sure your potting soil is sterile.

With a little care, you can keep your houseplants healthy and free of white fungus balls!

If It’s Not Fungus, What Else Could It Be?

Of course, it is possible those little white balls are not fungi. If you’re sure it’s something else that’s living in your potting soil, here are a couple things it could be:

If you’re a houseplant lover, you’ve probably noticed tiny white balls in your potting soil. These are called perlite, a type of volcanic glass often used as a soil amendment or growing medium.

Perlite is an excellent addition to houseplants because it helps aerate the soil and improve drainage. It also holds onto moisture, which is beneficial in dry climates or during winter when indoor plants need all the help they can get.

Perlite has many benefits for plants, but most importantly, it is considered non-toxic.

If you’ve found white, tiny balls in your houseplants, and you have eliminated the possibility that it could be fungus balls or perlite, there’s a chance they could be insects.

To start, try using a magnifying glass to examine the balls closely — if they’re moving, they’re most likely insects. If they’re not moving, they could be eggs. If you suspect they’re eggs, scrape them off the plant and dispose of them.

Once you’ve determined that the balls are indeed insects, it’s time to take action. The first step is to figure out what kind of insect it is. If you’re unsure, you can take a sample to your local nursery or garden center.

Once you know what kind of insect it is, you can choose the best eradication method. For example, if they’re aphids or whiteflies, you could use insecticidal soap or neem oil.

No matter what kind of insect it is, acting quickly is key to preventing further damage to your houseplants. With a bit of patience and effort, you can rid your plants of these pesky pests for good!

So, there you have it! White fungus balls popping up in your potting soil is a generally harmless occurrence that happens to many gardeners. While they may not look particularly appealing, they’re mostly nothing to worry about.

If you do decide to get rid of them, there are a few methods you can try. Have you ever encountered these little guys? Share any tips or tricks you may have in the comments below!

22 of the Best Halloween Wreath Ideas

21 Best Recipes to Cook Over Your Backyard Fire Pit

The Best Leaf Blower Attachments for Gutters in 2021

How To Prepare Your Raised Garden Bed For Winter

Scroll back to top
12shares